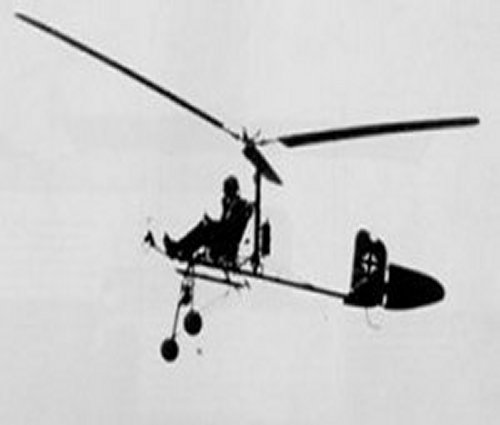 Because of their low profile in the water, submarines could not see more than a few miles over the ocean. To solve this, the German admiralty considered a number of different options, including a folding seaplane (Arado Ar 231). In the end, they chose the Fa 330, a simple, single-seater, autogyro kite with a three-bladed rotor.

By the end of World War II, some 200 of these small, motorless, three-bladed autogyros had been built for Focke Achgelis by the Weser Flugzeugwerke at Delmenhorst. This rotorcraft was flown as a kite towed by a submarine from a cable 60 to 150 metres in length. The collapsible assembly was made of steel tubes, and just behind the pilot’s seat was a pylon to support the rotor. The latter’s hub was of the simplest possible autogyro type with flapping and drag hinges. The rotor was set in motion by a rope or by hand alone, if there was sufficient wind blowing. To bring the autogyro back, the towing rope was pulled in by winch, and when the aircraft landed the rotor was brought to a standstill with a brake.

The Fa 330 could be deployed to the deck of the submarine by two people and was tethered to the U-boat by a 150 m (500 ft) cable. The airflow on the rotors as the boat motored along on the surface would spin them up. The kite would then be deployed behind the U-boat with its observer-pilot aboard, raising him approximately 120 meters above the surface and allowing him to see much farther — about 25 nautical miles (46 km), compared to the 5 nautical miles (9 km) visible from the conning tower of the U-boat. If the U-boat captain were forced to abandon it on the surface, the tether would be released and the Fa 330 descend slowly to the water. 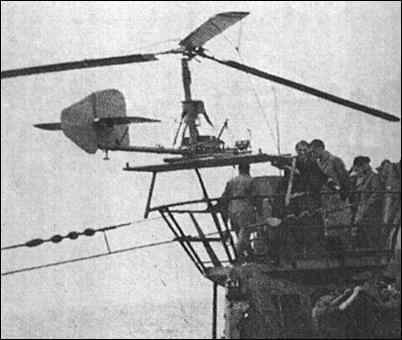 There were about 200 copies built by the Germans. Several of them exist today in museums, both in England and also in the USA.

When not in use, the Fa 330 was stowed in two watertight compartments aft of the conning tower. Recovering, dismantling, and stowing the Fa 330 took approximately 20 minutes and was a difficult operation.

As Allied air cover in other theatres of the war was considered too much of a threat, only U-boats operating in the far southern parts of the Atlantic and the Indian Ocean used the Fa 330. Despite its advantages, the use of the Fa 330 only resulted in a single sinking when U-177 used one to spot, intercept and sink the Greek steamer Efthalia Mari on 6 August 1943.

The Allies came into possession of an Fa 330 in May 1944 when they captured the submarine U-852 intact. After the war, the British government did successful experiments towing Fa 330s behind ships and jeeps, but the development of the helicopter quickly occupied the attention of the military.

U-boats that deployed Fa 330 kites included at least U-177, U-181, and U-852. Otto Giese wrote, “Our boat was rigged with a Bachstelze. This was a small, single, piloted helicopter attached to a long steel cable and lifted into the air by the speed of the boat while the cable was gradually reeled out. From his position aloft, the pilot had a 360-degree view and could report any vessels.” 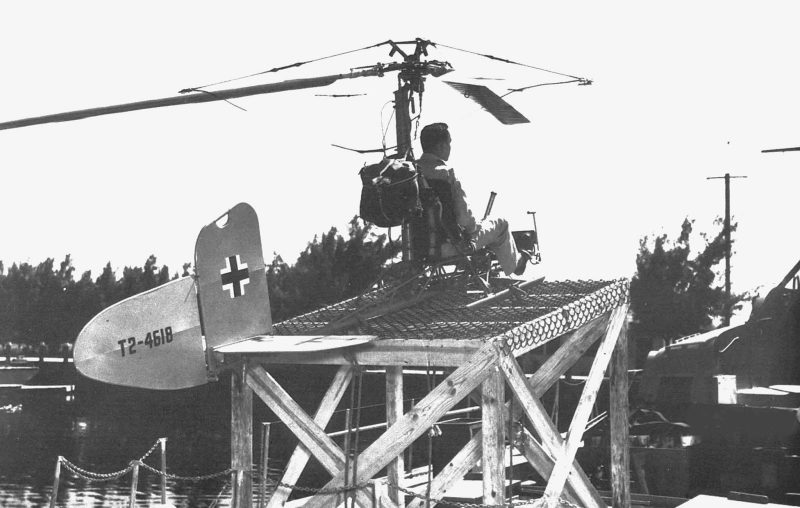 This was a rotor kite, towed behind an U-boat to increase its vision range. The scheme was abandoned because it cost too much time to recover it and the observer on it when the U-boat was attacked. About 200 were built.

It could hold an altitude of about 400 ft, and could see about 25 miles with powerful binoculars and report by telephone. In emergency the pilot could jettison the rotor and by recovered by parachute. Only a few were used and only in the Southern Atlantic and the Indian Ocean where aircraft patrols were not so common at the time, but were out of business by the growing Allied air power which demanded crash dives too fast for the poor autogyro pilot to be recovered. While aloft, the pilot was in contact with the submarine by telephone. In normal return to the sub, the winch wound in the cable until the Fa-330 was on the deck. There was an emergency procedure, however, by which the pilot could jettison the blades and rotor hub. When the rotor assembly separated, it automatically opened a parachute attached to both the machine and the pilot. The pilot then released his safety belt and the aircraft dropped into the sea, leaving the pilot descending alone by parachute. 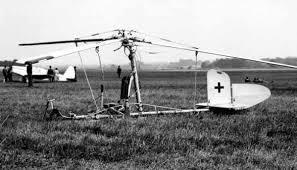 The Focke Achgelis Fa-330 Bachstelze (Wagtail) was specially developed for use in the U-boats as an observation post.

The first Fa 330s were probably issued in mid 1942 but were used in the South Atlantic only on rare occasions. From June 1942, the harried U-boat forces swung their main effort from the Atlantic to the Gulf of Aden and the Indian Ocean, where more use of the gyro kite was made. U-861, for example, used her kite on a patrol in the Indian Ocean off Madagascar. However, the new theatre of operations provided opportunities to exchange the Fa 330 for, in the eyes of the commander, something more usable. At Penang, Malaya, the Japanese had permitted the establishment of a U-boat base in the summer of 1943, and it was here that an Fa 330 was exchanged for a small Japanese floatplane. On another occasion, at ihe Surabaya (Java) U boat base, a gyro kite was exchanged for a Japanese floatplane to supplement the two Arado reconnaissance aircraft which kept watch over the harbour.

More Fa 330s survive today than any other examples of German rotary-wing aircraft, not only because they were built in by far the greatest numbers, but probably also because their small size does not make great demands on valuable preservation space.

« Vintage photos of Roald Amundsen and his men – the first humans at the South Pole
The life of a true Hollywood star-photos looking at the life of one of the greatest American actresses, Elizabeth Taylor. »