The name Swami Vivekananda might not be known to many, but his words and longings have become a part of the American experience. In the United States, the Fourth of July signifies one of the most important federal holidays, Independence Day. The holiday commemorates the adoption of the Declaration of Independence in 1776 and the separation of the thirteen American colonies from the British Empire.

Nowadays, Independence Day is associated with family gatherings that involve a plethora of traditional dishes, and political ceremonies that celebrate the rich history of the United States. A poem named “To the Fourth of July” can often be heard during these events, as it summarizes the universal will for freedom and liberty.

The poem was written by an Indian Hindu monk named Swami Vivekananda, a disciple of the famous Indian mystic Ramakrishna. Vivekananda traveled the world and gave lectures on the Hindu philosophy, and was the first Hindu monk to popularize the practice of yoga and the philosophy of Vedanta in the Western world. Vivekananda in Chicago, September 1893. On the left, Vivekananda wrote: “one infinite pure and holy – beyond thought beyond qualities I bow down to thee”

The poem praises and glorifies America’s liberty. Vivekananda used both terms “freedom” and “liberty”. The poem reflects his strong desire for liberty and has been described as a passionate and powerful longing for freedom. However, according to author Carebanu Cooper, even though Vivekananda addressed America’s Fourth of July in his verse, the poem depicts “a blending of the concrete and the abstract responses to a national event and to eternal concepts.” Vivekananda’s poem took America’s struggle and institution of freedom and universalized it to a global struggle.

In the poem he beholds the dark clouds are melting away and a new day has come – a day of liberty. He then goes on to describe the bright new day as birds singing, flowers blooming, and a welcoming lake of love opening up to the world. In the last lines he prays for freedom for every country, every man and woman on earth, who shall break off their shackles with uplifted heads and and spring forth with a renewed life.

Full text of the poem can be found in a link below. Vivekananda on the platform at the Parliament of Religions, September 1893 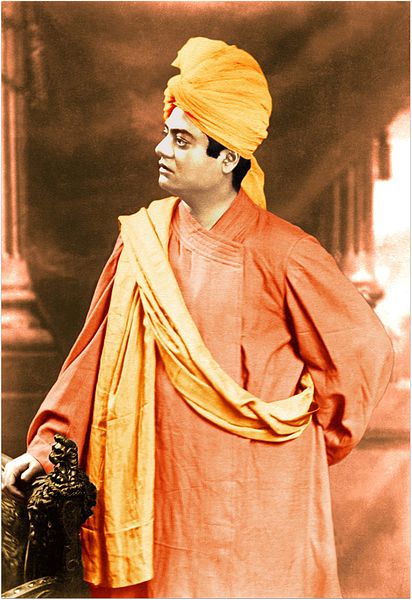 In 1896 Swami Vivekananda delivered a series of lectures in London. This photograph is from this period in December 1896.

Vivekananda was amazed by the United States and was especially moved by the spirit of freedom that he encountered among Americans of the late 19th century. He felt that the American dedication to liberty mirrored the dedication to freedom and enlightenment that he sought to achieve through his meditation and religious practice. He wrote the poem “To the Fourth of July” on the 4th of July in 1898, while traveling in Kashmir with a group of his English and American followers. The group celebrated Independence Day, and Vivekananda read the poem out loud during the day’s breakfast.

Vivekananda devoted his life to the pursuit of spirituality and enlightenment. He meditated every day for several hours, and during one of his meditation sessions, he received a vision which told him that he would die before his 40th birthday. Vivekananda at Chennai in 1897

Incidentally, he died on the 4th of July in 1902, aged 39. His disciples found him after he retired to his quarters for his evening meditation.

Read another story from us: Wacko Story: Pacific island cult who worship the spirit of an American WWII soldier. They hope he’ll return with Coca-Cola and TVs

The cause of death remains unknown, but his disciples claim that he died intentionally while achieving “mahasamadhi.” Mahasamdhi is the final stage of deep meditation, where the yogi consciously leaves one’s own body. Since Vivekananda was regarded as the spiritual heir of the great Ramakrishna, his disciples celebrated his death as a moment of great religious significance.

« “Oxfords not Brogues”: the origins of the leather footwear
PRIORITY The famous Hermitage Museum keeps 74 cats to keep its basements mice-free »