The man who became President without ever leaving his house

Presidential campaigns today are not for the faint of heart. To climb to the highest office in country, a candidate must engage in a non-stop whirlwind of speeches, baby-kissing, hand-shaking, interviews, and endless travel.

But in 1896, candidate William McKinley and his team devised a unique strategy that allowed the Republican nominee to run for office—without having to ever leaving his Canton, Ohio home.

After William Jennings Bryan, a Democrat from Nebraska, was nominated, he announced plans to tour the country by train.

This took McKinley and his advisers by surprise, forcing them to do some out-of-the-box strategizing of their own. Campaign manager Mark Hanna advised McKinley to organize a whistle-stop campaign train. 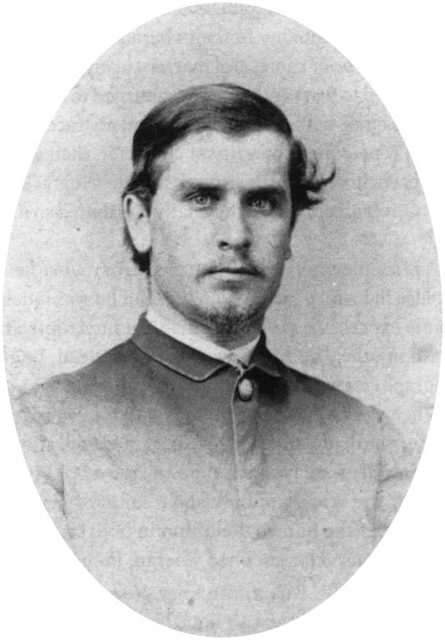 McKinley in 1865, just after the war. Photograph by Mathew Brady.

The candidate’s response: No way (or words to that effect). “I might just as well put up a trapeze on my front lawn and compete with some professional athlete as go out speaking against Bryan,” said McKinley. “I am going to stay here [in Canton] and do what campaigning there is to be done.”

The health of his wife, Ida, may have been another factor for not straying too far from home. 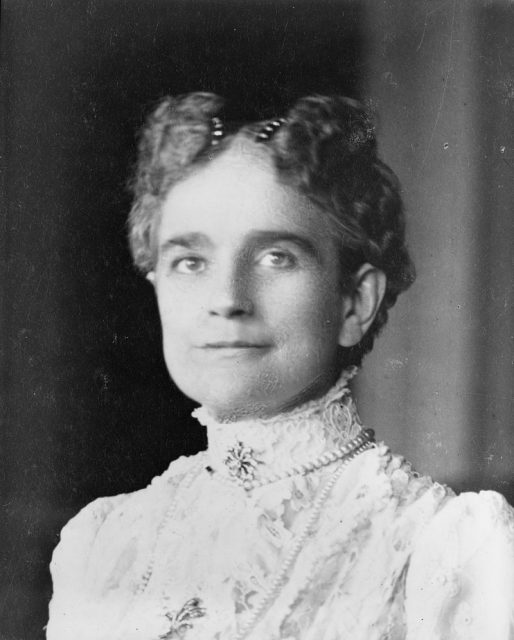 The fragile Mrs. McKinley broke down under the loss of her two young daughters within two years of each other. She developed epilepsy—having a seizure at McKinley’s inaugural ball as Governor of Ohio–and became dependent on her husband. 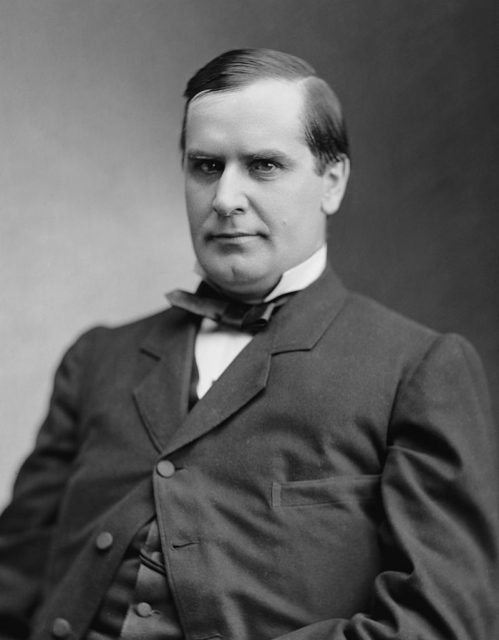 McKinley and his team began to think of another way to compete with Bryan’s train tour. McKinley thought back to Benjamin Harrison, who had met with some potential voters at his home in Indianapolis, during the presidential campaign of 1888.

He also remembered the reaction to his own nomination in June. When the news of his victory arrived, via telegraph, his hometown of Canton went crazy, with several thousand supporters gathering on his lawn to celebrate his victory. 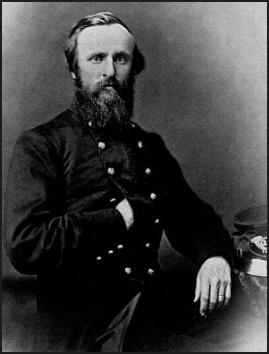 Rutherford B. Hayes was McKinley’s mentor during the Civil War and afterward.

And there it was: Instead of traveling from state to state, McKinley would have the voters come to him. And come they did. Trains packed with people pulled into Canton to meet the candidate. Many were in a celebratory mood and had a grand old time of it, marching through the streets, sometimes accompanied by lively bands. 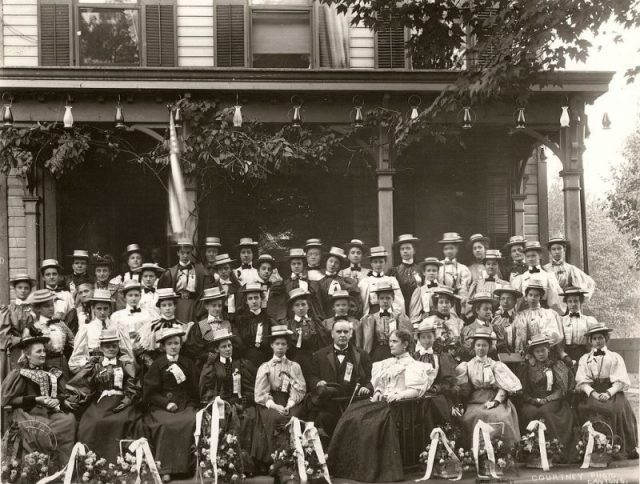 William and Ida McKinley (to her husband’s left) pose with members of the “Flower Delegation” from Oil City, Pennsylvania, before the McKinley home. Although women could not vote in most states, they might influence male relatives and were encouraged to visit Canton.

It was an eclectic gathering. There were veterans and women’s groups, of course, but also more distinctive delegations: pumpkin growers, glee clubs, and the downright offbeat (witness: the “Six Footers Club of Pittsburgh”).

The goal was to make McKinley seem folksy and familiar, in contrast to the boisterous showboat that was Bryan.

At the candidate’s house, delegates settled on the front lawn. McKinley stepped out onto his front porch and listened to each group’s concerns.

He then responded, briefly addressing the delegation’s special interest. (This bit required some sleight of hand: Each delegation was told to send a draft of their remarks prior to arriving, and McKinley—never a good off-the-cuff speaker—reviewed the statements beforehand.) 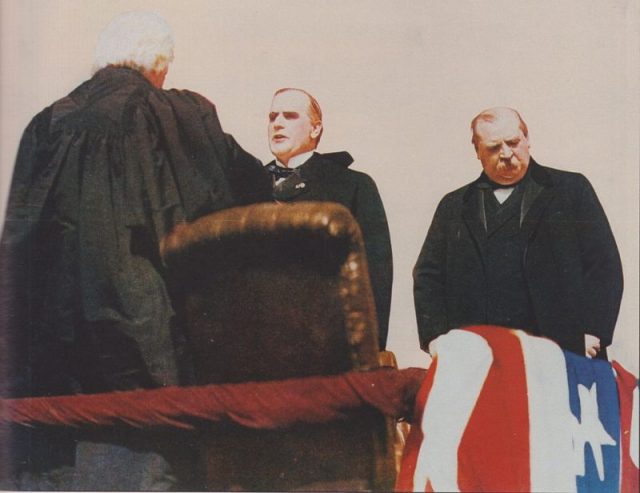 After shaking each and every hand and asking for their support, McKinley invited his supporters to walk through his house. They left through the back door and returned to the train station, ready to return home to sing the candidate’s praises.

McKinley usually appeared from morning to night and gave over 300 speeches, while staffers distributed pamphlets. 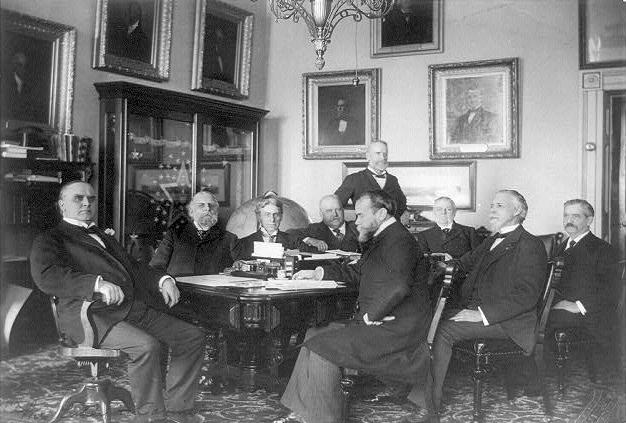 The front porch campaign proved as inspired as Bryan’s cross-country whistle-stops. Approximately 750,000 people made the pilgrimage to McKinley’s home.

Fellow Republican Theodore Roosevelt found the whole spectacle unseemly, grumbling that McKinley was being advertised as if he were a product. Maybe so, but the goings-on in Canton got huge press and the GOP raised a ton of money. 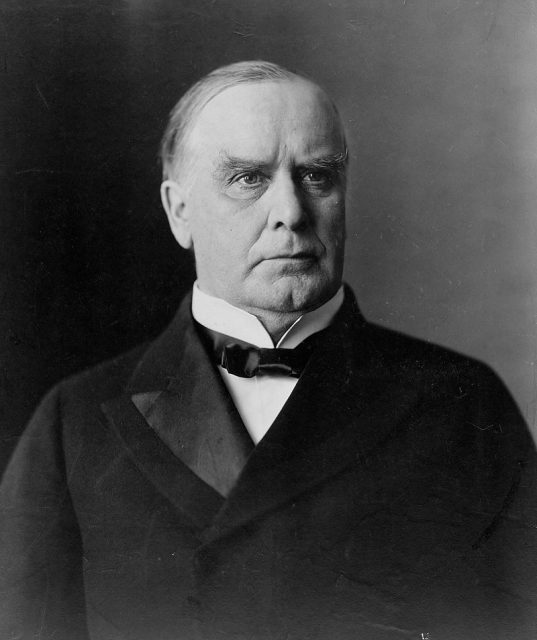 A skillful campaigner, Bryan logged close to 18,000 miles in the months leading up to the election.

Read another story from us: In 1864, President Abraham Lincoln signed the Yosemite Land Grant, which changed the American landscape forever

But in the end, McKinley’s down-to-earth campaign won out. He went on to defeat Bryan in 1896 and again four years down the road. In the 1900 election, though, McKinley left most of the legwork to his hardy running mate, Theodore Roosevelt, who trekked across 24 states for a grand total of 21,000 miles, a feat not even Bryan could match.