For those of us old enough to remember, 1989 was a tumultuous year of great joy and expectation. Some of those great expectations became real, others did not, and some briefly made an appearance, only to sadly disappear.

In 1989, the Cold War between East and West ended, and many of the repressive regimes of Eastern Europe were overthrown after 40-odd years of dictatorial control.

The most memorable images were pictures and news reports of crowds dancing on and taking apart the Berlin Wall, which had divided the largest German city since 1961 and was a symbol of communist repression world-wide.

There were many other memorable images from the year, including crowds in Prague, Czechoslovakia shaking their keys at the symbols and leaders of the communist government there–the keys were meant to say, “Leave the keys on the table and go home,” and “Goodbye, now we hold the keys to power.” 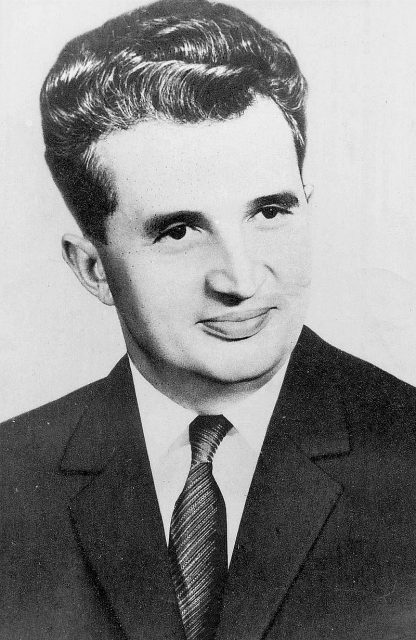 Official photo of Ceaușescu from 1965

Heartbreaking ones were also coming out of China, where perhaps thousands were killed in anti-government protests.

But some of the most memorable images came when Romanian dictator Nicolae Ceausescu and his wife were hastily put on trial and executed on live television in December.

Ceausescu had ruled Romania and its communist party since 1965. Within a couple of years, he had complete and total control over virtually every aspect of Romanian life.

He (and his family including his unpopular wife, Elena) controlled the media, the army, the secret police and the coffers of the country. 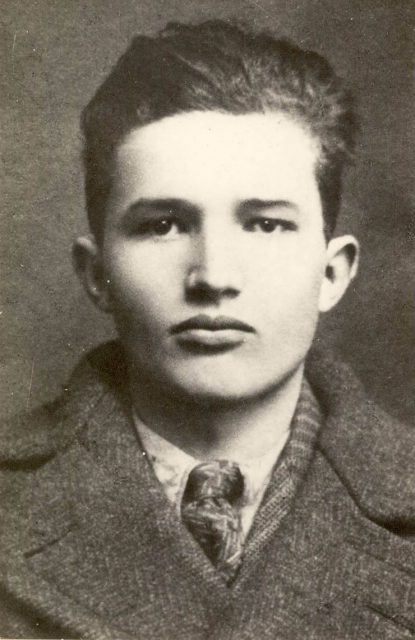 Arrested in 1936 when he was 18 years old, Ceaușescu was imprisoned for two years at Doftana Prison for Communist activities.

Professing to be a communist, Ceausescu, in reality, was a one-man capitalist system–or better yet, he was more like a Mob boss who skimmed profits off of virtually everyone and every business in the country.

The most visible symbol of this greed and power was his palace, ironically called “The People’s Palace.” It still stands today as a reminder.

The palace, according to a CNN report of 2014, used 239,220 square yards of carpet, one million tons of marble, three and a half tons of crystal, and is considered to be the world’s third-largest building by volume after the Aztec pyramid at Teotihuacan and the rocket assembly hangar at Cape Canaveral. It is bigger than the Pentagon. 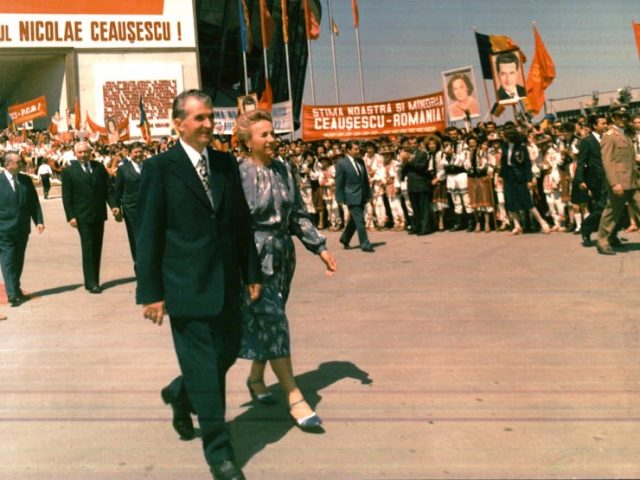 By the 1980s, a personality cult had developed around the Ceaușescus. Photo Fototeca.iiccr

This was just one of Ceausescu’s residences. It should be remembered that Romania was not a rich country. Even today it struggles. In the eyes of Ceausescu, his family, his immediate circle, and the bureaucratic apparatus of the country, the workers of the nation existed to provide them with the means to live their lavish lifestyles.

All the while, the workers and peasants (the very people communism was supposed to help most) had to live on platitudes about the worker’s state. 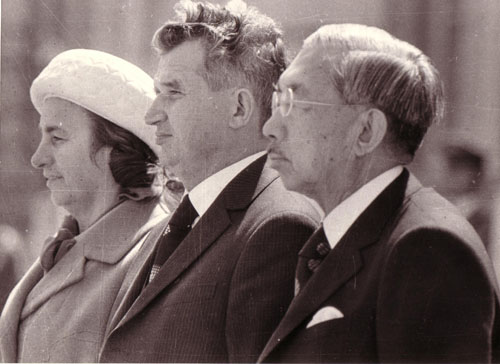 Strangely enough, for a time, Ceausescu was popular. He, like Tito in Yugoslavia, did not toe the line of dictates from the Soviet Union–frequently trading with and visiting the West against their wishes.

In 1984, Romania was one of only three communist countries to attend the Los Angeles Olympic Games (the others being Yugoslavia and China).

Though by 1984 Ceausescu’s popularity was on the decline, people still liked that he declared that Romania would make its own decisions, though he was careful not to go too far. 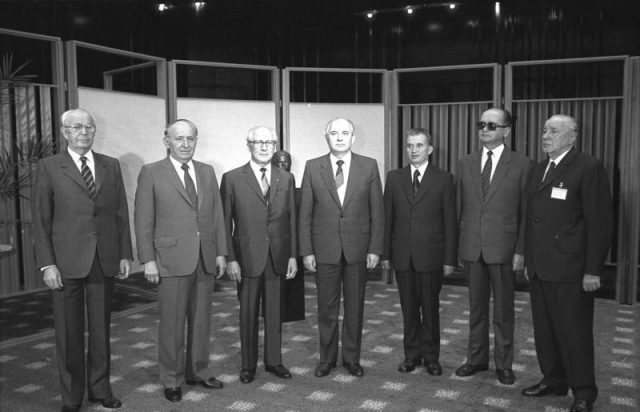 Warsaw Pact leaders, 1987 (from left): Husák of Czechoslovakia, Zhivkov of Bulgaria, Honecker of East Germany, Gorbachev of the Soviet Union, Ceaușescu, Jaruzelski of Poland, and Kádár of Hungary. Photo by Bundesarchiv, Bild 183-1987-0529-029 / CC-BY-SA 3.0

His slow decline in popularity began 1977, when coal miners in the Jiu Valley went on strike. Coal was one of a few commodities that Romania could sell overseas, and was vitally important.

Miners from other areas of the nation also traveled to the coal-rich valley to make their grievances heard.

The miners’ grievances were easy to understand. In a country that was still using equipment from decades before, safety in the mines was abysmal–they wanted better equipment and medical care. 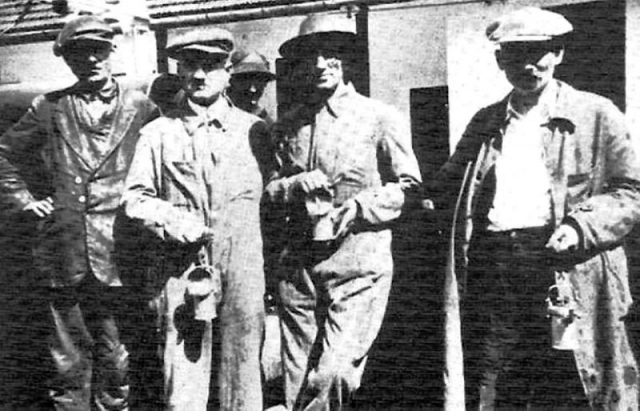 Writer Panait Istrati (second from the right) with coal miners of Lupeni, during the 1929 protests

They also strongly objected to recent changes made to their work requirements (which were made to cut costs–in other words, to line to pockets of those above them).

Some of these new requirements were: the extension of the eight hour day, ending of disability pensions and the raising of the retirement age from 50 to 55 (if you think that’s a good deal, remember, most Romanian miners grew up poor and went to work in their teens–by 55, many had been working in the mines for over 30 years).

Many other things concerned the miners as well: wages lower than other Communist Bloc nations, work on Sundays, the lack of promised overtime payments for months, paycheck reductions for failing to meet quotas, and exceedingly poor living conditions.

The strike began on August 1, 1977, with a walkout by tens of thousands of miners. The next day, local party leaders who tried to calm the miners down were cornered and taken hostage until Ceausescu personally came to see them.

The miners had been told that the dictator was on urgent national and Communist Party business. Actually, he was taking a vacation on the Black Sea with his family. 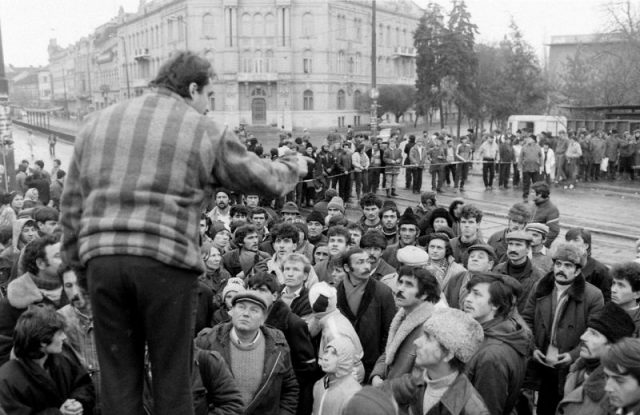 All during the first and second days of the strike, the secret police monitored and infiltrated the crowd, taking names and pictures, and posing as miners to get more information.

By the time Ceausescu got to the Jiu Valley on the 3rd, tens of agents were in the crowd and security police were on the outskirts of town. Local armories were locked down in fear that the miners might try to seize them and begin a revolution.

When the dictator arrived, he assumed he would be given a cordial welcome and made his way into the crowd. As he made his way to a microphone, he was handed a list of demands, which were also being shouted by the crowd of miners, which may have numbered over 30,000.

Ceausescu was not used to this kind of treatment and began a shaky, halting speech in which he promised to take up the miners’ grievances, all the while stating that “This was not a war” and “…this is a disgrace to the nation!” according to Constantin Dobre, one of the leaders of the strike. 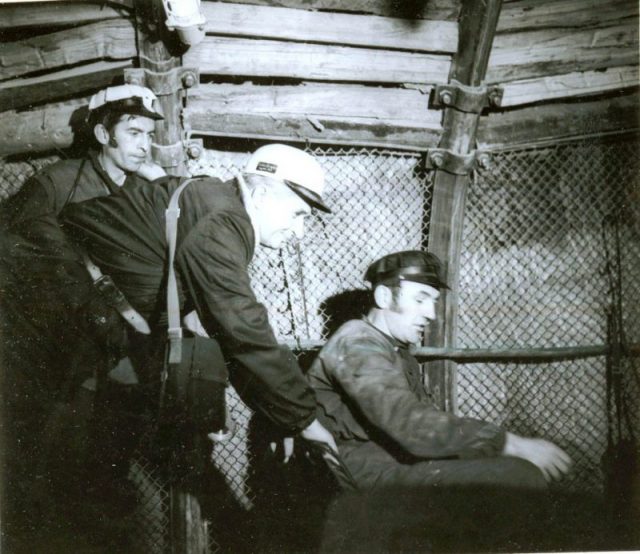 Ceaușescu, in miner’s helmet, on a return visit to Lupeni in November 1977. Photo by – Fototeca online a comunismului românesc, CC BY-SA 3.0

He told them the six-hour day would be implemented, but he had to consult with other political figures, which all knew was untrue. The miners shouted “Six hour day, tomorrow!”

As his speech went on, the dictator became more and more shaken. He then resorted to threats: “If you do not go back to work, we’ll have to stop pussy-footing around!” but even that didn’t work.

Eventually exhausted, Ceausescu began to give in to the miners–at least verbally. He made promises about work hours, conditions, and would find those responsible for them. He also agreed to give Saturdays and Sundays off and create jobs for the miners’ families.

It was only after delivering these vague promises that he left the stage, having spoken for five hours, and having to lean on aides as he was leaving the platform, so shaken was he and afraid for his safety.

So, what happened in the aftermath? Eventually, some of the miners’ demands were met. They did not have to work Sundays and some medical care was improved. That was pretty much it. 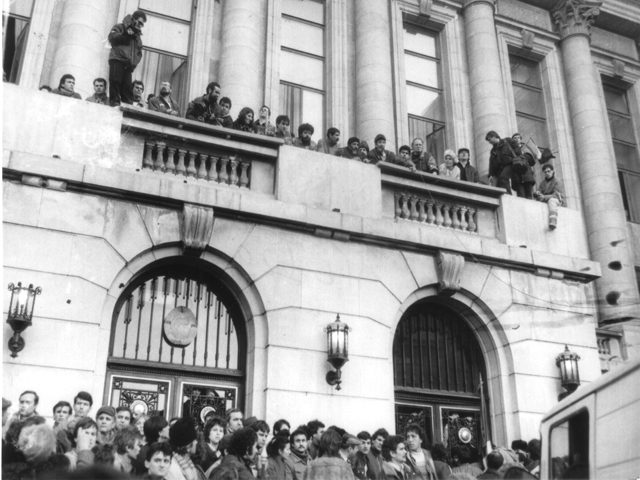 The balcony where Ceaușescu delivered his last speech, taken over by the crowd during the Romanian Revolution of 1989. Photo by – Romanian National History Museum

What about the leaders of the strike? Within days, most were arrested. Later, many were sent to other parts of the country to be given unskilled non-mining jobs away from their families.

They were lucky. A small number were sent to Romania psychiatric hospitals where they were essentially tortured with psychiatric drugs. Others were sent to labor camps on the Black Sea Canal. Four thousand were fired. Many others were beaten and threatened by the Securitate and were subjected to surveillance for years.

The worst punishment was revealed after the 1989 Revolution when the files of the Securitate were opened to the public. 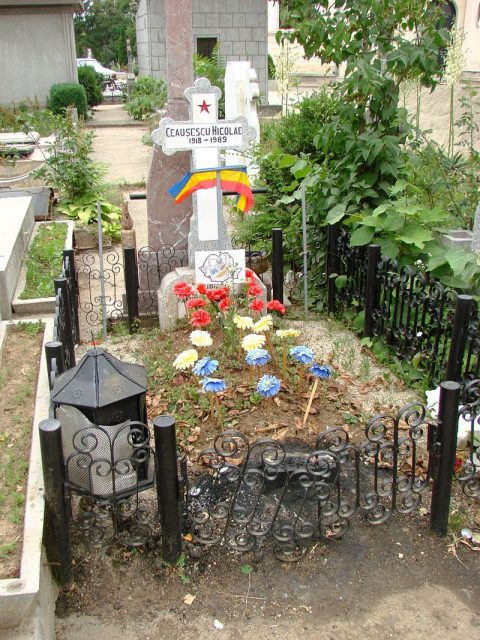 In his 1997 book, Eastern Europe in the 20th Century, Oxford history professor Richard Crampton cites documents that state that a number of the strike ringleaders were taken in for “medical treatment.”

While there, they were given five-minute exposures to X-rays. Many of those so treated developed cancer and died.

When Ceausescu was killed in 1989, alongside his corrupt wife Elena, many in the West were shocked by his quick “trial” and summary execution. They shouldn’t have been.

« Castle for Sale: One man’s home is … your new castle?
Fascinating Pictures Showing the Arctic Lifestyle of the Inuit People »