In July 2018, Olivia de Havilland celebrated her 102nd birthday. The retired actress has been living in Paris ever since the 1950s, but today is rather more widely noted not as a resident of the French capital, but as the Classic Hollywood’s grande dame.

Among her best-praised roles is that of Melanie Hamilton Wilkes, in Gone with the Wind (1939). Of the four leading actors and actresses in this timeless classic, which also include the now late Vivien Leigh, Leslie Howard, and Clark Gable, only de Havilland, is still among us — her star shining on. 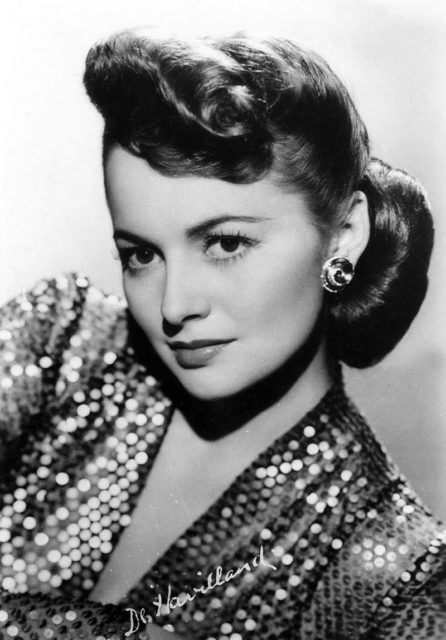 The star was born in Tokyo, on a summer’s day of July 1, 1916, in a world torn by an ongoing war. Her parents were Walter de Havilland and Lillian Fontaine. Walter de Havilland, a Cambridge graduate, had relocated with his spouse in Japan due to his studies and both of the couple’s daughters were born there.

Olivia’s sister was Joan Fontaine, also a famous actress. Although the pair is remembered for a lasting feud between each other, they are also the only pair of siblings to have both grabbed an Academy Award for a leading role in a movie. 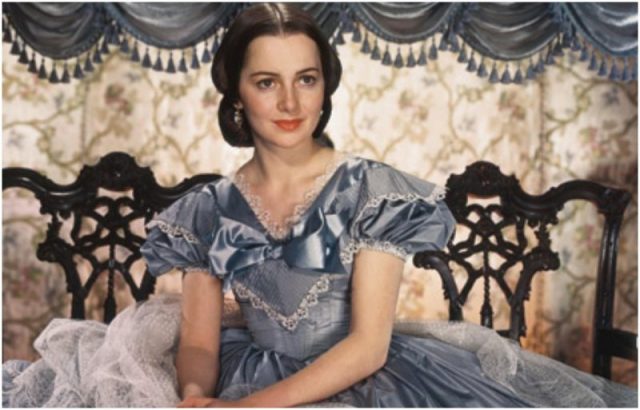 Olivia de Havilland as Melanie Hamilton in Gone With the Wind.

De Havilland was largely influenced by her mother, a stage actress herself. She had her first big year in 1933 when she took the role of Hermia in Shakespeare’s best-known comedy A Midsummer Night’s Dream. The piece was produced by Austrian film and theater director Max Reinhardt and it showed at the Hollywood Bowl.

It was this performance that brought de Havilland a full-time contract with Warner Brothers. Her career had just jump-started.

In the following years, the actress would recurrently co-star alongside her Australian counterpart, Errol Flynn. The pair first appeared together on the big screen in 1935 in Captain Blood. Three years later, again siding next to Flynn, de Havilland played Maid Marian in one of the top 10 box-office hits of the year, The Adventures of Robin Hood. 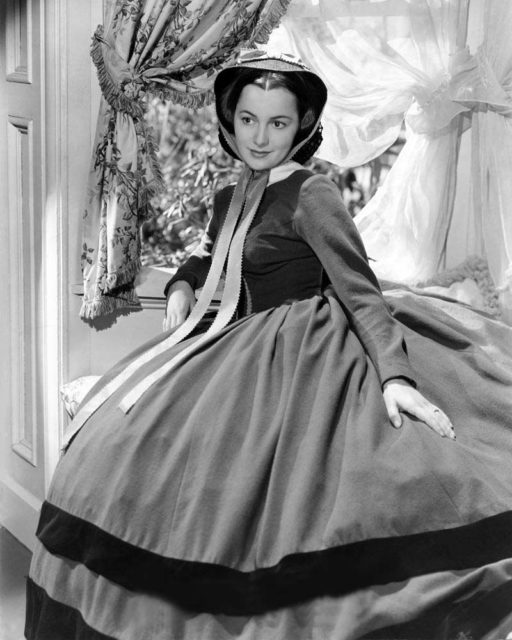 Studio publicity portrait for Gone with the Wind, 1939.

However, the real fame for Dame Olivia came once she accepted the role in Gone with the Wind, the film that deeply moved audiences at the end of the 1930s, and ever after. A drama set in the days of the American Civil War, based on the novel penned by Margaret Mitchell, proved a classic as the years went by.

In a 2004 interview for the New York Times, de Havilland remarked that she never gets bored of discussing the movie again and again, and that she herself has enjoyed watching it 26 times in total. 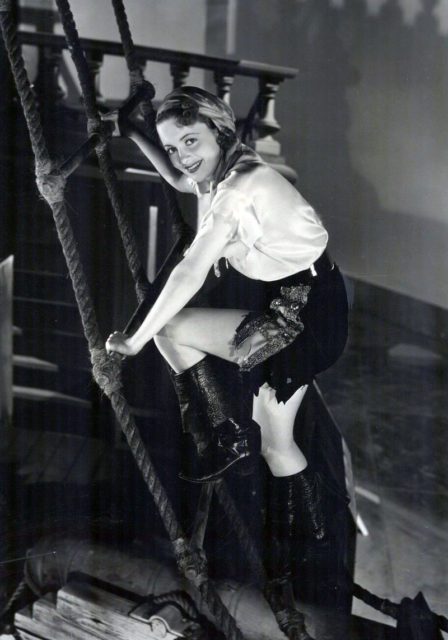 De Havilland depicts the amiable character of Melanie Hamilton in the 1939 classic, in a striking contrast to the blazing Vivien Leigh who takes on the character of Scarlett O’Hara. While both the women in the film initially have a love interest in Ashley Wilkes, played by Leslie Howard, it is Hamilton who wins him in the end. The flamboyant character of Rhett Butler, played by Gable, who couples with O’Hara.

Over interviews, de Havilland has also talked about difficulties some of the cast faced while filming. For instance, Clark Gable was faced with a scene in which his character was heartbroken due to the loss of his daughter Bonnie. According to de Havilland, Gable struggled with this particular scene, one which he shared with de Havilland, as he was supposed cry in front of the camera. 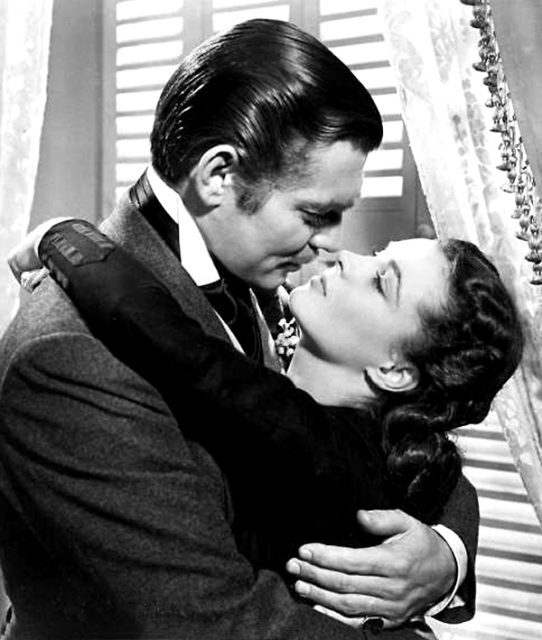 “He was worried: you see, he had never cried on the screen before. He thought it was not masculine to cry. He was so worried about it,” the actress reportedly said.

However, de Havilland also encouraged him: “I remember I said, ‘Tears denote strength of character, not weakness. Crying makes you intensely human.’ He agreed, rehearsed it, and it turned out to be one of the most memorable scenes in the movie.” 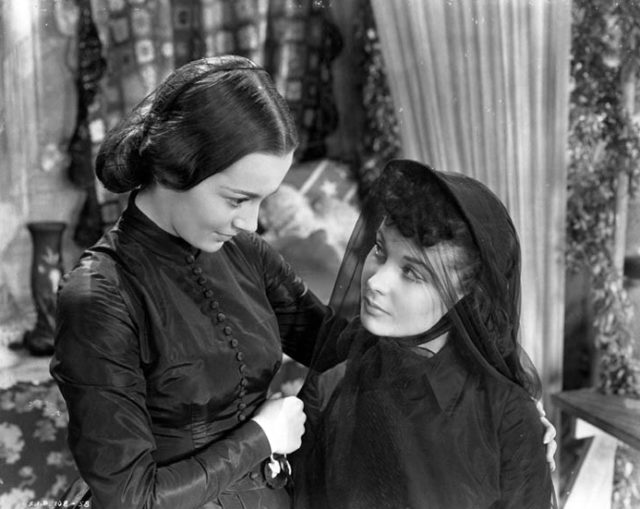 Olivia de Havilland and Vivien Leigh, publicity photo for Gone with the Wind, 1939.

For her role in Gone with the Wind, de Havilland earned her first Academy Award nomination. She did’t win this one but did scoop the Oscar for her role as Josephine Norris in Each His Own (1946), and for playing Catherine Sloper in The Heiress (1949).

During her decades-spanning career, de Havilland worked on about 50 movies, remaining active until the 1980s. With an empire of motion pictures behind her, as well as the well-deserved recognition and awards, the last-standing true star of the 1930s has indeed made a lasting mark in the history of the film industry. 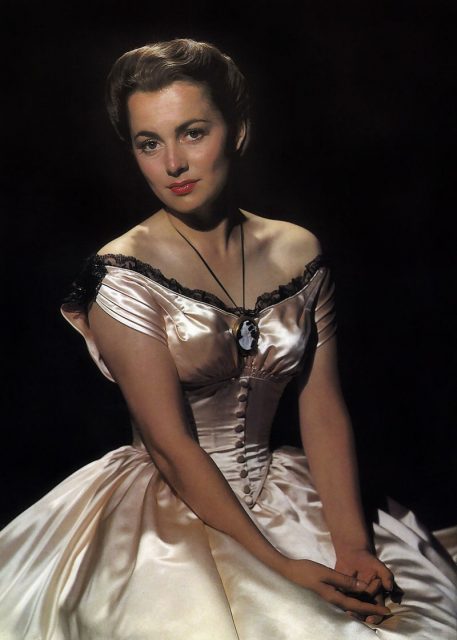 And if you are wondering what de Havilland is doing at 102 — she is just past a recently filed lawsuit. The reason? Remember that feud between her and her sister? According to de Havilland, the TV show Feud took it a step too far.

“The creators of Feud used my identity without my consent and put false words in my mouth, including having me publicly calling my sister, Joan Fontaine, a ‘bitch’,” she wrote to The Guardian in March this year. Later that same month, the lawsuit was thrown out.

« Origin of the Frisbee – An Empty Pie Plate and the Planet Pluto
Laurel and Hardy: Hollywood’s Greatest Friendship »