From Mud to Max Factor – The Strange Evolution of Makeup

Max Factor, born in 1872 as Maksymilian Faktorowicz, was a chemist, wig maker, cosmetician, and businessman, according to JewAge, and was also the founder of Max Factor & Company.

By the time he was 9, he was already in the beauty industry, apprenticed to a wigmaker and cosmetician in his hometown of Lodz, Poland.

By 14 he was working in Moscow as a wigmaker and cosmetician for the Imperial Russian Grand Opera. 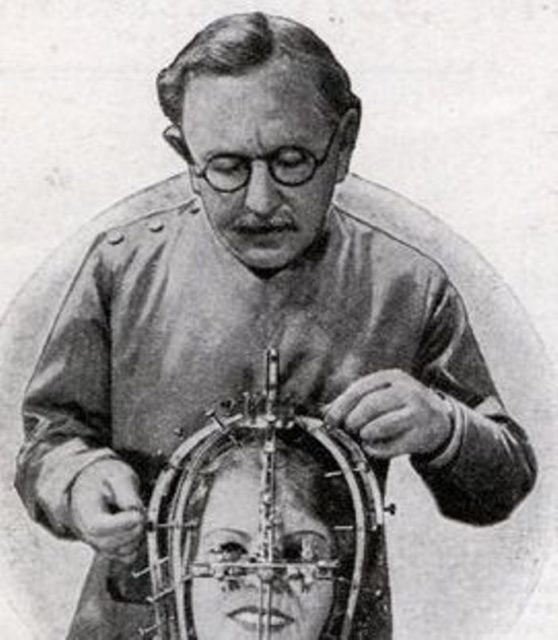 After a few years in the army, he began to sell handmade creams, perfumes, rouges, and wigs and started to earn a name for himself when a traveling acting troupe wore cosmetics he’d made while performing for Russian nobility.

In 1904, Factor and his wife decided to move to America since they had concerns about rising anti-Jewish sentiment in Russia. 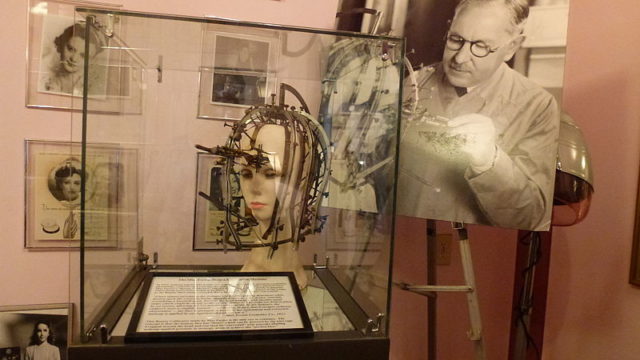 In the 1930s, Max Factor invented this scary-looking machine to aid in the perfect application of makeup. Hollywood Entertainment Museum. Photo by Jllm06 CC BY SA 4.0

His family arrived at Ellis Island on February 25, 1904, with $40,000 and the desire to start a new life. While being processed on arrival, his name was misspelled as “Factor” by the customs officer, and he let it stand.

By 1909 Factor and his family moved to Los Angeles, hoping to produce custom-made wigs and cosmetics for the film industry.

How Stuff Works discusses how Factor made his fortune and founded an empire when he developed a formula for a greasepaint foundation for use by film actors that wouldn’t cake or crack. 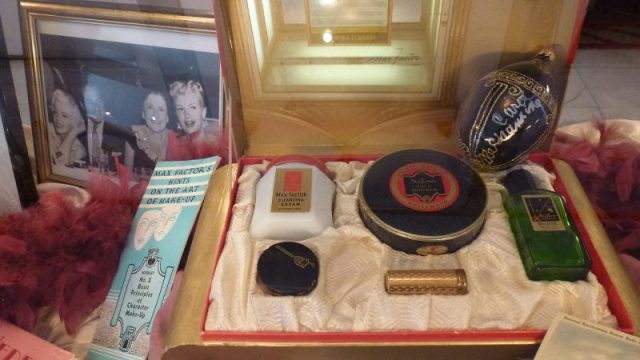 His greasepaint became very popular among actresses, and he went on to develop lip gloss and an eyebrow pencil.

He began marketing his cosmetics to women outside of the film industry, saying he could make them look like their favorite stars. The rest, as they say, is history.

Women have been using cosmetics to enhance their appearance for millennia, but how did we get from ochre, rice powder, and other minerals to where we are today? 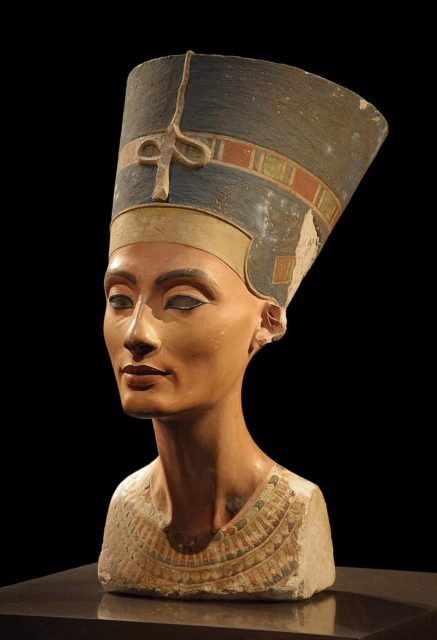 According to Cosmetics Info, ancient Egyptians were using scented oils to protect their skin from sun and wind and to mask body odor as early as 10000 BC.

They used scenting agents such as lavender, myrrh, peppermint, cedar, and rosemary, mixed with aloe and olive-, sesame-, or almond oil to produce their creams and perfumes. 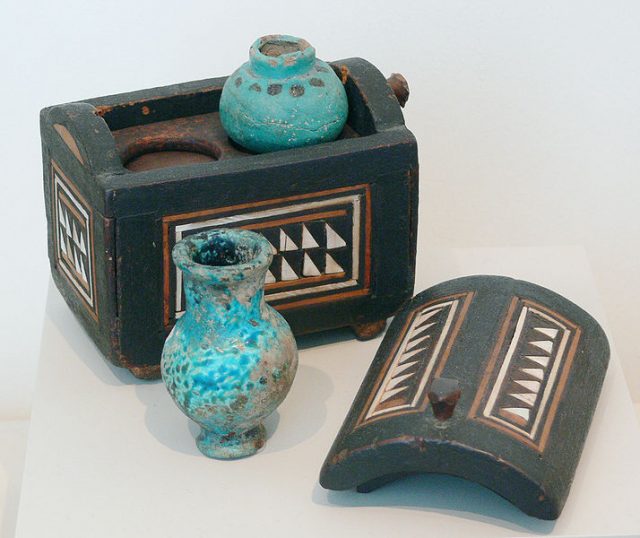 By 4000 BC, Egyptian women were using galena mesdemet, made from copper and lead ores, and malachite on their faces and used a mix of ores called kohl to line their eyes.

Egyptian women of the time often carried their cosmetics with them when they went to parties, much like women of today. 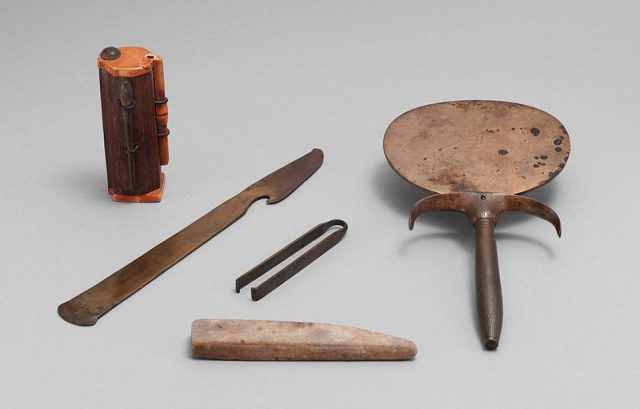 An ancient Egyptian cosmetic set, dating to c. 1550-1458 BC and including (left to right) a kohl tube, a razor, a whetstone, a pair of tweezers, and a mirror.

In 3000 BC, the Chinese began to color their nails, using a mixture of gum Arabic, eggs, gelatin, and beeswax.

The colors they used were indicative of social status: Chou dynasty royals wore gold or silver, subsequent royals could wear black or red, and the lower classes were forbidden to wear bright colors on their nails at all.

At about the same time, in Greece, women began to paint their faces with white lead and crushed mulberries to enhance color. They also sometimes used false eyebrows made of ox hair. 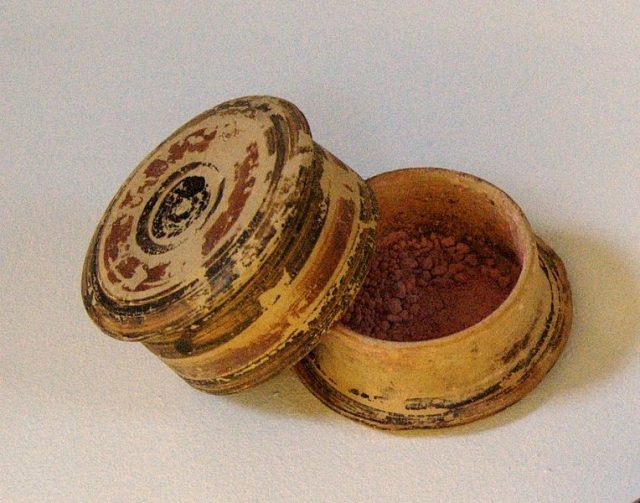 Corinthian pyxis with a red make-up powder. Found in a tomb from the 5th century BC.

The Chinese and Japanese began using rice powder to whiten their faces by 1500 BC, as well as shaving their eyebrows. Teeth might be painted black or gold, and henna was first used to add color to hair and or face.

There are accounts of Romans putting a mixture of butter and barley flour on pimples, as a sort of concealer, and making crude nail polish out sheep fat and blood by 100 AD, but things didn’t really start to pick up steam in Europe until the late Middle Ages and the Renaissance period. 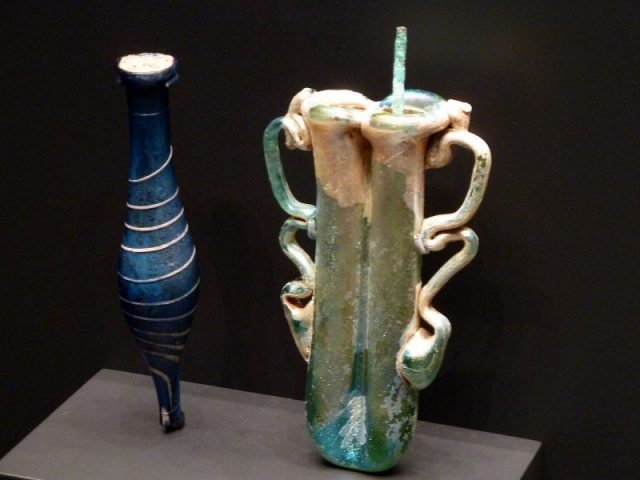 Between 1200 and 1600, increasing numbers of women (and men) of the wealthy classes across Europe began to use cosmetics.

Men coming back from the Crusades brought perfumes from the Middle East. A hundred years later, women put egg whites on their faces to make their complexions look paler.

Eventually, France and Italy begin to emerge as centers of cosmetic production.

It wasn’t until around 1900 that pressure was put on even middle-aged women to look as young as possible, and use of cosmetics spread among more women and more social classes, if sometimes covertly.

Read another story from us: Chinese Foot Binding – The Excruciating and Dangerous Female Fashion Trend

Over the course of the 20th century, use of cosmetics became increasingly mainstream and accessible to women of all walks of life, its lure spread by pop culture and people like Max Factor.