It can be hard to vacation on a budget, especially in places as breathtaking and cultured as Italy. Luckily, there’s a relatively inexpensive but beautiful Italian castle, perched on a breathtaking cliff top, in Roccascalegna, Italy.

This castle, built in the 15th and 16th centuries, during the rivalry between Angevin and Aragonese forces, is available to rent — the whole castle — for around $114. 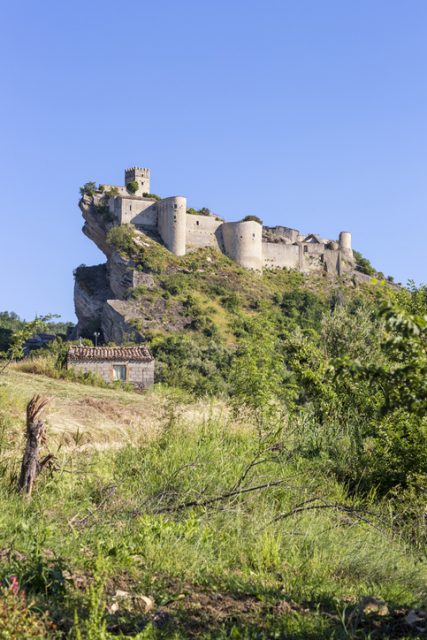 CNN Reports that the site has a troubled past, ravaged by barbarians and pirates as well as enemy combatants. Eventually, it was abandoned and then refurbished for rent to tourists. The castle represents a very different time, and provides a unique opportunity for an affordable adventure into the past in a beautiful, remote location.

Due to its storied history, the castle is also a popular destination for ghost hunters, who stay the night hoping to spot the spirit of Baron Corvo de Corvis. 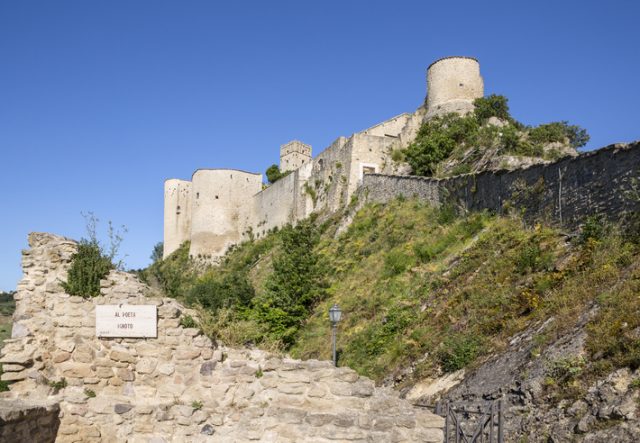 The Castle of Roccascalegna overlooks the small town of Roccascalegna, and is popularly known as the “Castle in the Sky.” According to Borghi Magazine, the town dates back to 1160, possibly being expanded from an earlier settlement. The monks from the Church of San Pancrazio were probably present in the region as early as 829.

The fortifications were meant to control the valley of the Rio Secco, and defend the area against attacks from the Byzantine Empire. The castle probably started as a watchtower, later being expanded by Norman builders around 1320. 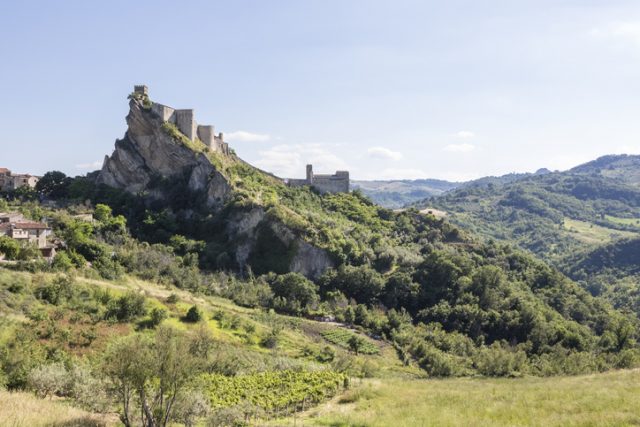 Castello di Roccascalegna is a castle from the 11th century with some additional towers and walls from the 16th century. It is located on a steep limestone cliff not far from the Adriatic Coast in the Province of Chieti.

Travel and Leisure notes that the castle today consists of a massive 7,500 square foot fortress. It comes complete with all the expected medieval castle features such as a chapel, dungeon, tower, gardens, etc. The site also mentions that the town below is beautiful, dotted with trees, restaurants, stone cottages, and other accoutrements.

The castle itself can be rented for a very reasonable fee of around $114. Bookings for weddings and other ceremonies are also available. Domenico Giangiordano, the Mayor of Roccascalegna, hopes that the refurbished castle will boost the town’s tourism and help it deal with its dwindling population. 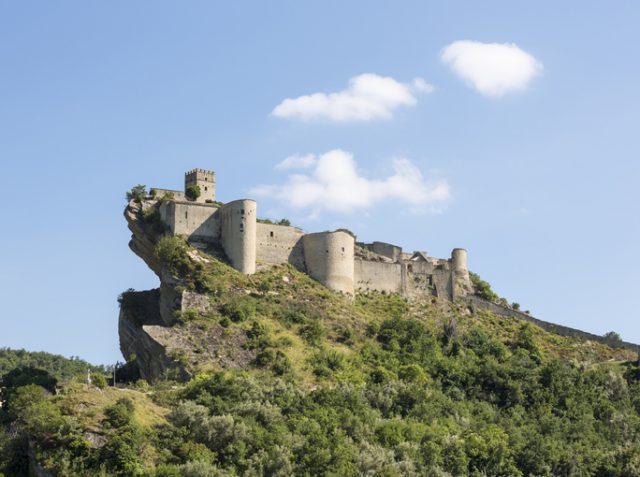 According to CNN, the town is not accessible by car, and visitors must climb old donkey trails in order to make their way to the castle. This makes Roccascalegna a bit of an involved tourist destination, but the views and the history are well worth it.

The castle sits upon a high basalt cliff, towering over the surrounding countryside dotted with fields of flowers and olive trees. The chapel facilitates wedding ceremonies, while locations such as the repurposed dungeons or tower rooms provide excellent venues for business meetings or similar gatherings. 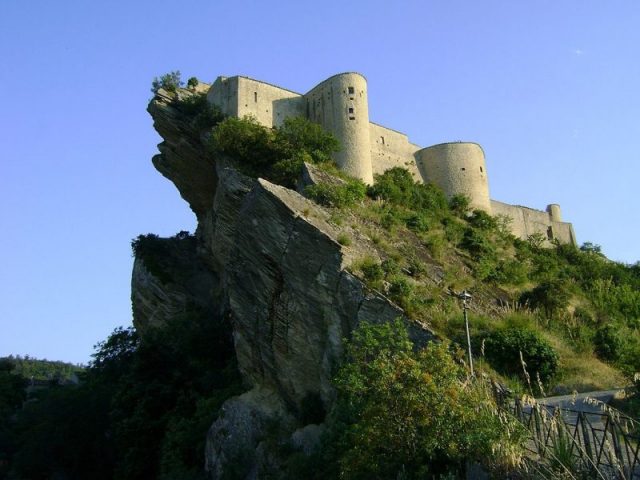 The Castle of Roccascalegna, province of Chieti, Abruzzo, Italy.

Catering is coordinated between the castle and the village and offers a selection of rustic local foods. Specialties include homemade meatballs with local sheep’s cheese and eggs, olive oil flatbread, lamb skewers, and sweet-and-sour waffles.

Wedding planning services are also available to help facilitate weddings that guests may wish to book, complete with specialty wedding cakes available from the catering service.

According to Abruzzo Turismo, the Baron of Roccascalegna, Corvo de Corvis, was an especially wretched man who made a point of bedding every girl in the village on her wedding night. This was a medieval tradition, but it wasn’t taken too well by some of the locals. 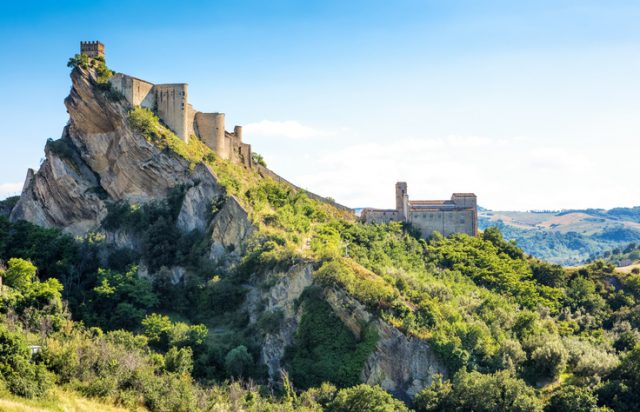 On a moonless night in 1646, he is said to have met his end when he was stabbed by the girl he was to bed that night. Some versions of the tale say that it was the girl’s husband, wearing women’s clothes.

The castle was apparently cursed by the grisly death, and it is said that a bloody imprint of the Baron’s hand can be seen upon the rocks around the castle.

Attempts to wash off the horrid mark were apparently unsuccessful, and ghost hunters and skeptics visit the castle to this day, hoping to catch a glimpse of the Baron’s presence.