When the Great Depression hit America, millions of people were forced to rely on their wits to survive. From the end of the “Roaring Twenties” through to the conclusion of the Thirties, the nation was reeling from the impact of the Stock Market Crash.

History.com wrote that “By 1933, when the Great Depression reached its lowest point, some 15 million Americans were unemployed and nearly half the country’s banks had failed.”

With everything except misery in short supply, making do was the only option. Clothes were a classic example. Fashion was by far the first consideration — yet there was already something in place to ensure that clothes could be made from things lying around the house. 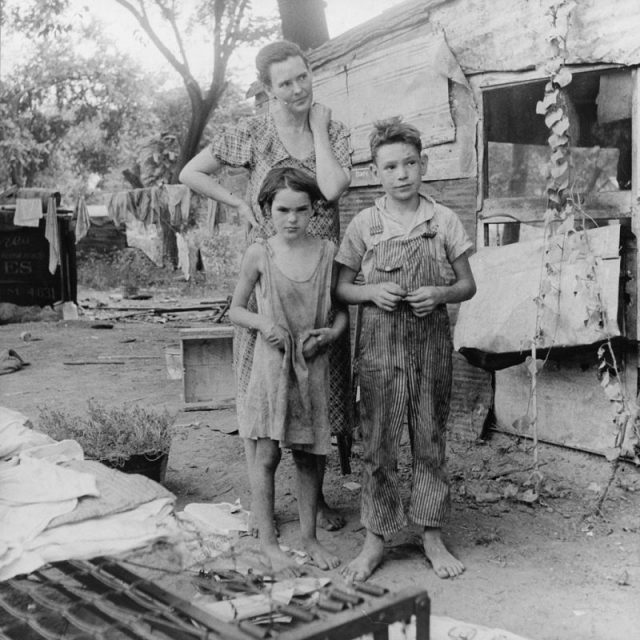 An impoverished American family living in a shanty, 1936

Going back almost a hundred years before the time of the Depression, a change happened in the way goods were transported. Potatoes, flour and animal feed had previously traveled the world in barrels. Now, for reasons of cost, the sturdy wooden containers were replaced with fabric sacks.

Companies then observed the sacks being recycled as clothes and decided to market these unlikely objects as possible fashion items. Sacks would arrive ready-printed with attractive images like sunshine and flowers. 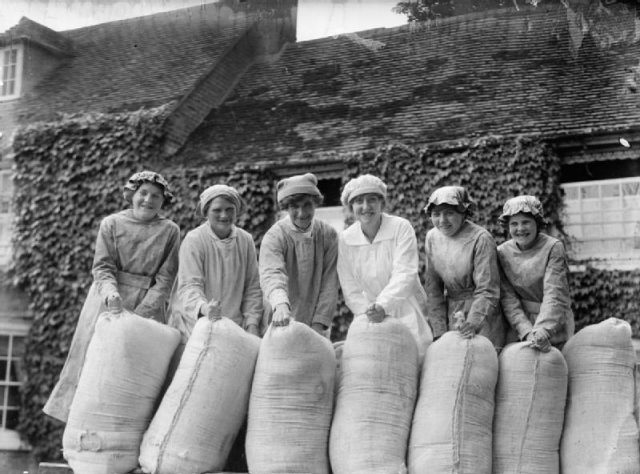 As a 2017 article for Slate.com noted, “By 1925, at least one company, Gingham Girl flour, packaged its goods in dress-quality fabric and used its sacks as a selling point. By the Depression years, printed sacks were widely reused.”

Dresses and other creations were worked on by enterprising families. The National Museum of American History wrote that “With feed sacks and flour bags, farm women took thriftiness to new heights of creativity, transforming the humble bags into dresses, underwear, towels, curtains, quilts, and other household necessities.” 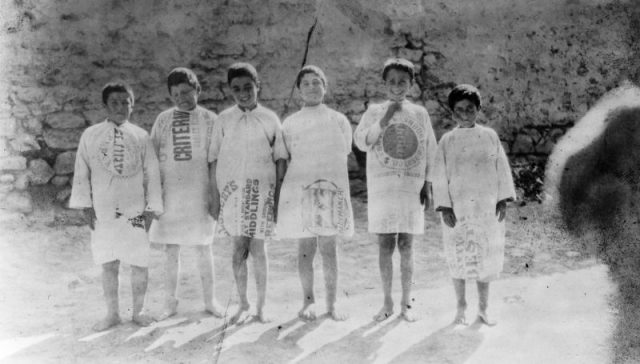 Children’s clothing made from flour sacks

There was the tricky matter of the manufacturer’s name to consider. Slate mentions a booklet titled Sewing with Cotton Bags, produced by The Textile Bag Manufacturers Association in 1933, which was “advising consumers how to get company logos out of sacks.”

For example “you had to soak the logo’s ink in lard or kerosene overnight. By the late 1930s, companies began to use soluble inks that made the process much easier.” 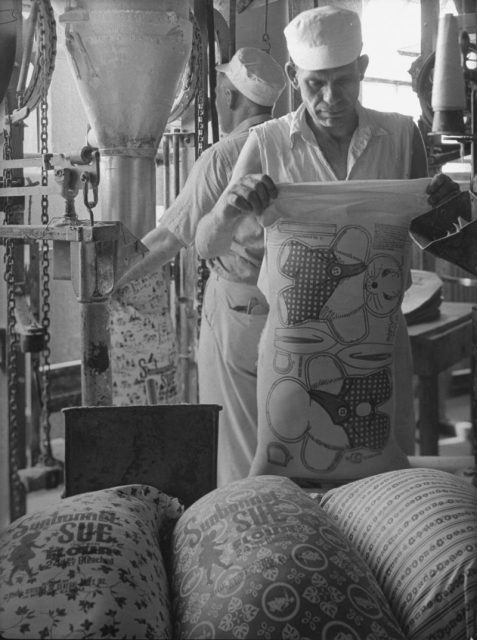 So eventually there was far more to the humble potato sack than a means of shipping spuds. The style endures into the modern day vintage market, though it shouldn’t be forgotten that its origins lie in a period of unimaginable hardship. 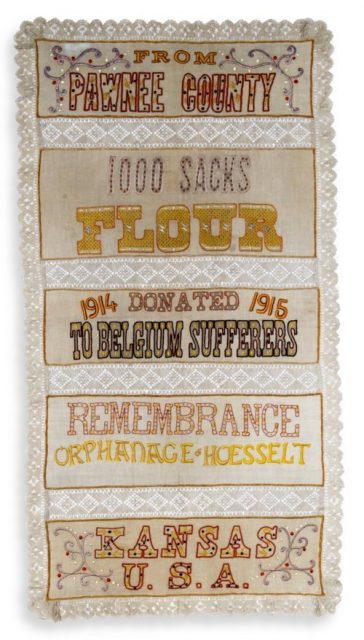 “For many women in rural America,” Slate said, “use of these sacks for clothing was a mark of poverty. Soaking off logos, dying fabrics, and using embellishments of ribbon, rickrack, embroidery, and decorative buttons helped make the feed sack dress or shirt less distinguishable from ‘store bought’ garments.” 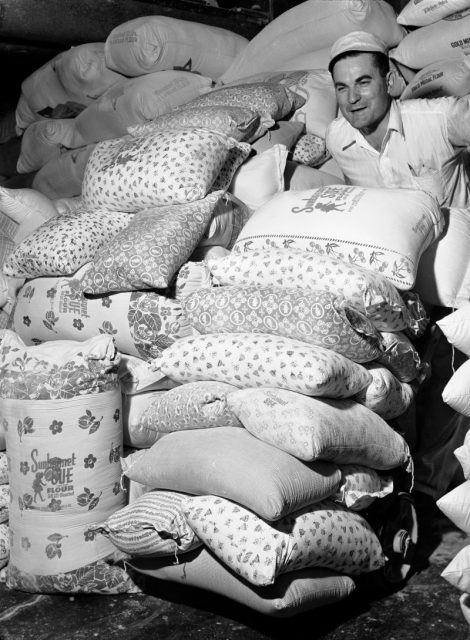 Quoted is an off-color joke made by a company manager after the Depression in 1946, which went, “They used to say that when the wind blew across the South you could see our trade name on all the girls’ underpants”. 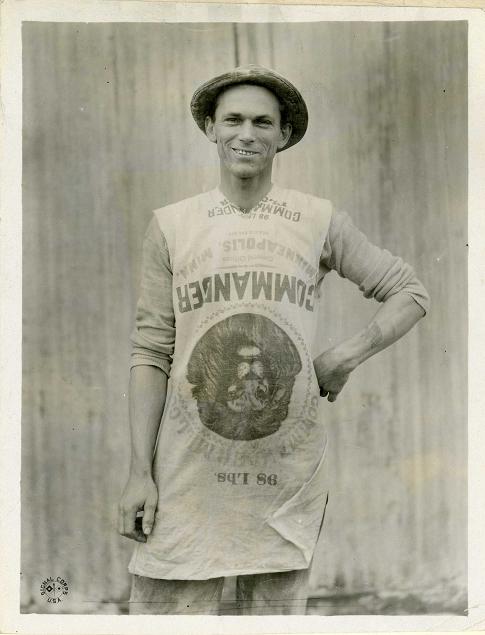 The Depression ended, but not before the national psyche had been forever scarred. And there was an intriguing footnote to the story of sack fabric “fashion”, involving a true American icon.

In a famous photo from 1951, Marilyn Monroe posed wearing a burlap potato sack. The reason this happened is still debated. One version of the tale goes that a prudish female journalist had deemed Monroe to be far from classy, and better suited to wearing a sack.

Marilyn Monroe poses for a portrait in a dress made out of an Idaho potato sack in 1951 in Los Angeles, California. Photo by Earl Theisen/Getty Images

The actress obliged, and Twentieth Century Fox were happy to set up the publicity-attracting snap. A different take claims a comment that Marilyn’s beauty would improve even a potato sack was the source of the bizarre picture. Despite the Hollywood mischief-making, there was a serious social undercurrent even years after the Depression.

Timeline.com wrote in a 2018 piece that “According to Monroe, the photos were so successful that an Idaho potato farmer actually sent her a whole sack of potatoes as a thank you for the generous publicity, but Monroe apparently never got to enjoy them, saying: ‘There was a potato shortage on then, and the boys in publicity stole them all. I never saw one.’”

An ironic development in a situation heavily associated with one of America’s saddest periods.