Colonel Sanders was more than just a brand ambassador. He was also a man. In many ways his life and work intertwined – notably with his rank, which was given because of the quality of his chicken rather than for any military purpose. Yet there was a side of the Colonel that typically stays out of sight. That of the tragedies he suffered on the long road to success. Some even occurred after he made his millions with that secret recipe sensation. 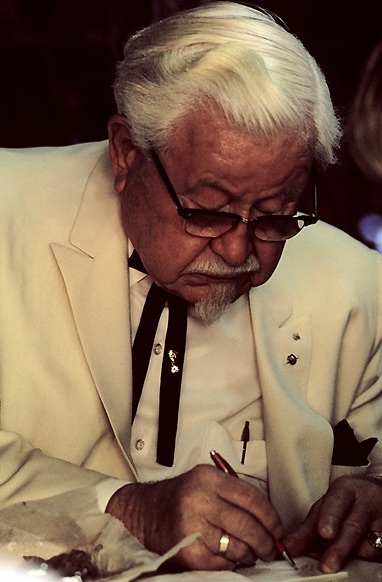 Kentucky Fried Chicken was as far from an overnight success as it’s possible to get. The journey didn’t begin for Harland Sanders until he reached middle age. Before then he’d taken many paths, surprising in their variety.

His cooking skills, however, were always there. As a 1970 New Yorker profile observes, “He learned to cook at an earlier age than many children learn to ride a bicycle.”

Toward the end of the 19th century, he was a young boy who’d learned to feed a family in the absence of his mother Margaret Ann. She was out working at a factory, alongside another job as a seamstress. 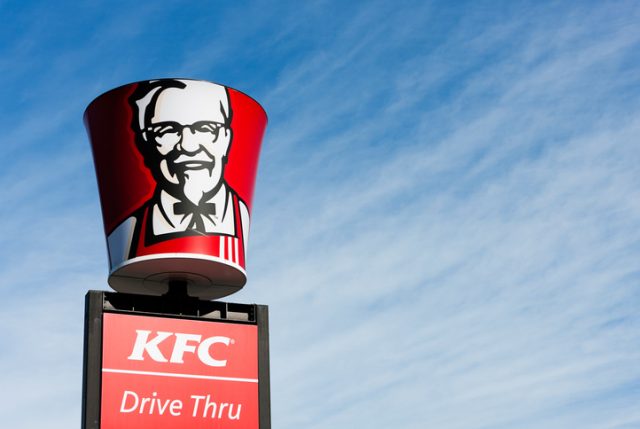 Sanders’ father Wilbur David had passed away a few years after his birth in 1890, meaning it fell on young Harland to shoulder household responsibilities. Then gainful employment beckoned. He started work on a farm at the age of 10. Margaret Ann married again and the clan moved to Indianapolis. But any happiness was short-lived for Harland, who fell out with his stepfather and ended up striking out on his own and dropping out of education. 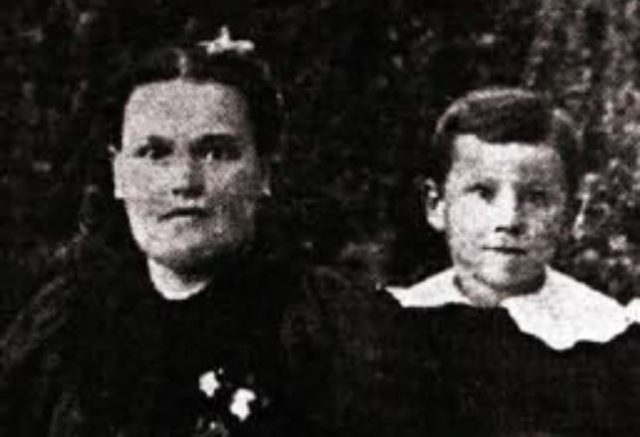 Though hard work was Sanders’ watchword he was also restless, and moved from job to job. His first marriage – to Josephine King from Alabama in 1908 – suffered through this lack of stability.

Mashed.com listed his numerous roles, which “included a brief stint in the U.S. Army (during which he was sent to Cuba), as well as working as a streetcar conductor, a railroad fireman, an insurance salesman, a secretary, a tire salesman, a ferry operator, a lawyer, and even a brief stint as a midwife (really!).” 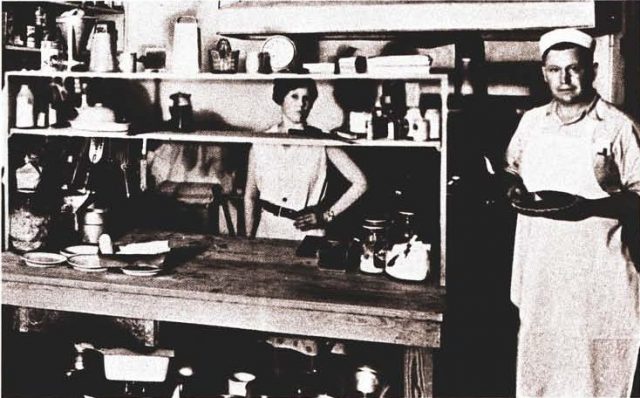 Sanders working in his cafe at Corbin, Kentucky, c. 1930s

One devastating event left a lasting mark on Sanders. Harland Jr, one of 3 children he had with Josephine, died in a tragic and unexpected way at 20. He went to have a routine tonsillectomy and developed fatal blood poisoning in 1932. It was a bitter pill to swallow, especially as Sanders’ business interests were looking up. Now entering his forties, he ran a Kentucky gas station and also served food. Really good food.

“It wasn’t glamorous work, but it landed Sanders the one thing he’d never found in his life: success,” wrote Mashed.com. “It was a modest yet satisfying life for the Colonel. A few years later, he took out the gas pumps and set up his first restaurant.” 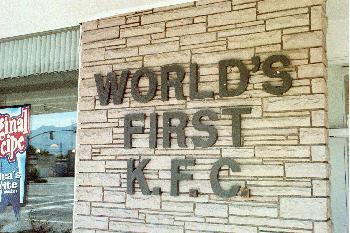 Unbeknownst to him, he had built the foundations of Kentucky Fried Chicken. He earned the title of Colonel (from state governor Ruby Laffoon) and eventually those meals became more than just a livelihood. Sadly another setback lay ahead before he could get to that destination.

Sanders depended on the flow of traffic to survive. That was cut off when the busy highway junction was moved, followed somewhat cruelly by the building of an interstate highway miles away from the restaurant. Harland sold his business at a loss and took to the road for what could have been one last roll of the dice.

He went door to door at eateries up and down the US, armed with his secret weapon… the chicken recipe. Progress was made but nevertheless this was “a slow, expensive, and humiliating way to pursue business partners.” 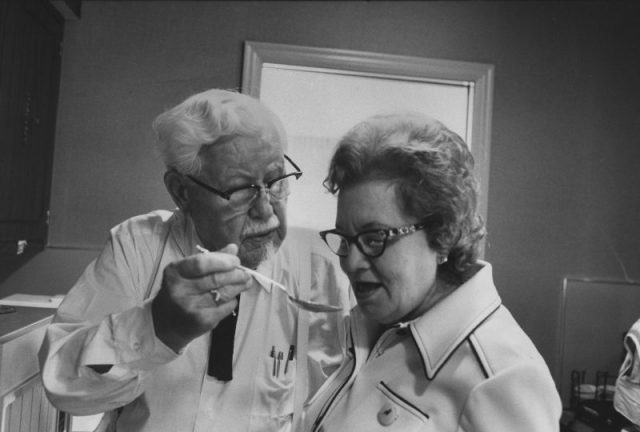 Also “Sanders (and sometimes his wife) lived out of his car and ate begged meals from friends whenever he could.” The marriage finally ended in 1947. He wed Claudia Price 2 years later and they remained together until his death.

Through tremendous perseverance, by 1964, 600 outlets were dishing up that lip-smacking brand of the Colonel’s original recipe, the ingredients of which remained a trade secret, though the name KFC hadn’t been applied yet. It should have been blue skies and sunshine for the Colonel from there on in, and to a degree it was.

But there was also discontent after he sold the franchise that same year to Kentucky lawyer John Y. Brown Jr, who was working alongside millionaire Jack Massey. Their determination to take the business off Sanders’ hands paid off. By this time he was into his seventies and maybe didn’t have the energy for cutting and thrusting. He parted ways with his dream company for $2 million plus a $40,000 salary. 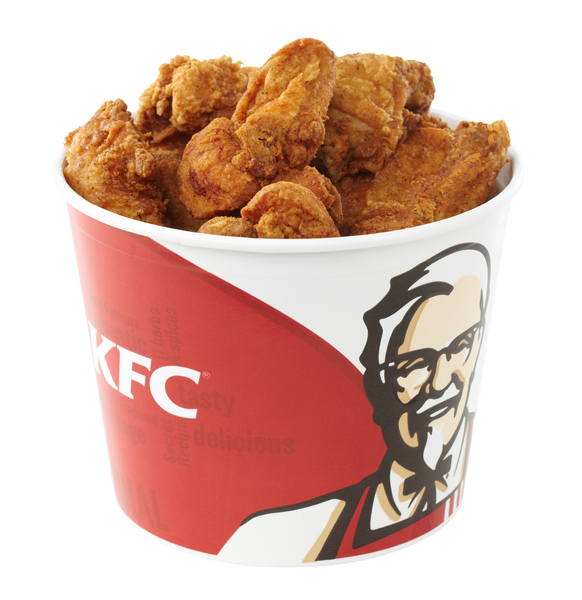 It certainly wasn’t a dog’s life for the Colonel following the sale but he did have his regrets. While his role was now as the face of KFC, his exacting standards meant he clashed with his new bosses.

As the New Yorker put it, “The Colonel is vexed almost beyond endurance by the subject of gravy.” For Sanders, quality was king. He just had a different idea of it than his corporate colleagues. As one exec said, “Let’s face it, the Colonel’s gravy was fantastic, but you had to be a Rhodes Scholar to cook it.”

It wasn’t unknown for the Colonel to visit a KFC at random to sample their wares. His religious convictions didn’t extend to colorful language and his comments were expressed without a filter. “If the gravy meets his low expectations, he delivers one of his withering gravy critiques, sometimes emphasizing his points by banging his cane on whatever furniture is handy.” 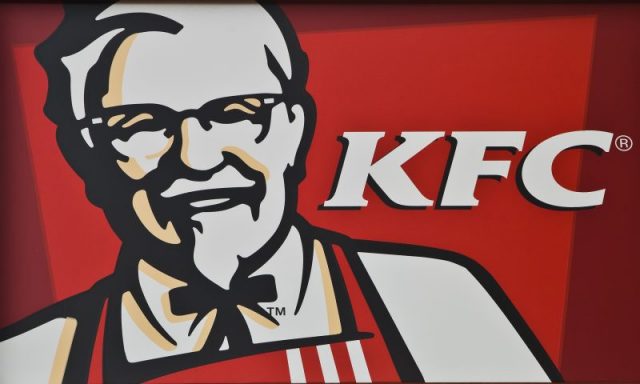 He also went toe to toe with the chicken giant by first opening his own restaurant, then bad-mouthing the company’s standards in the press. All the while he continued as KFC’s chief representative.

The New Yorker remarked “Though the Colonel is sometimes cantankerous in private, he is a smooth, charming pro in public… “Everywhere he goes, he attracts crowds of housewives who are grateful for all the nights in the kitchen that K.F.C. has spared them.” 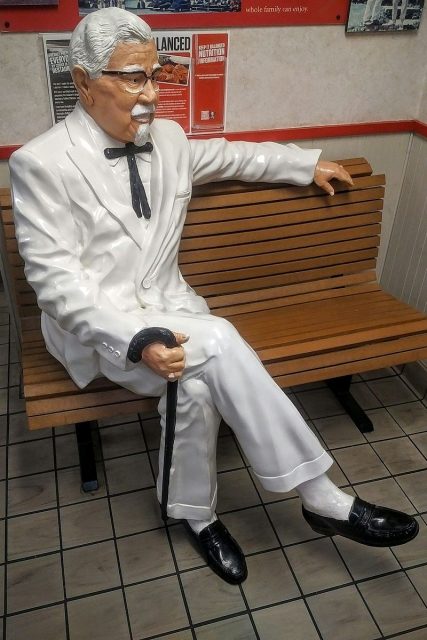 Fans flocked to him, though he wasn’t averse to issuing withering put-downs behind their backs. Even so, the public persona was as immaculate as his white suit. It took a while for Harland Sanders to realize his potential, but once he did, it wasn’t for him to sit back on his laurels. The ride was bumpy but highly rewarding.

One sentence sums him up better than anything: “The Colonel maintains vigilant fretfulness in the face of overwhelming good fortune.” With the tragedies he and his family endured, it wasn’t surprising he had his doubts.