It may seem that America’s true crime obsession is new, from Ted Bundy to Charles Manson and John Wayne Gacy to Jeffrey Dahmer. There are movies, documentary series, books, and podcasts that discuss the heinous crimes, all of which are readily consumed by the public. But our obsession with true crime goes back farther than you might think.

On September 14, 1922, Eleanor Mills and Reverend Edward Hall of New Jersey were murdered. What ensued was a media frenzy that pushed the case into the public eye, with many people nationwide interested in the case. The murder and trial, with a mysterious witness and a romantic scandal, is considered by many to be what really started America’s obsession with true crime.

Hall and Mills were likely two very unsuspecting victims. Hall, 41, was a well-known Episcopal minister who married one of the heiresses to the Johnson & Johnson dynasty, Frances Hall. Mills, 34, was a working-class woman who sang in the choir at Hall’s church. She was married to James Mills, who was acting sexton at the church and a full-time janitor. Together Eleanor and James had two children. 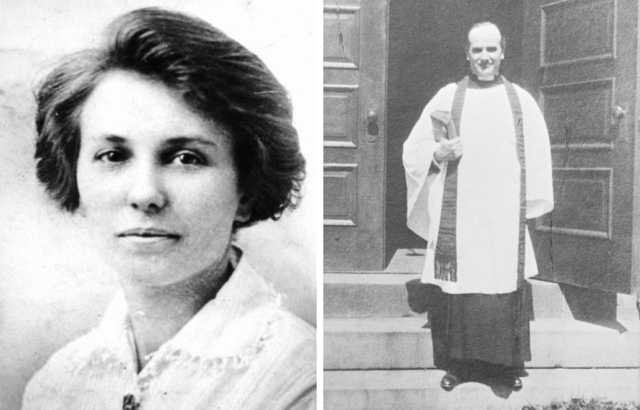 The discovery of Hall’s and Mills’ bodies was made on September 16, 1922, in a field in Somerset County, New Jersey. A local man and his girlfriend were walking along the road near a farm when they saw what looked like a man and woman lying under a crabapple tree, a common sight for this stretch of road as it was known as a “lovers lane.” Except for one aspect – it was evident that they were dead.

They were discovered lying on their backs, having both been shot in the head, Hall once, and Mills three times. Mills also had her throat cut and, as would be discovered many years later, had her tongue cut out. Apparently, the bodies had been moved after their death and laid side by side. Hall had his hat placed over his head and his calling card put at his feet. 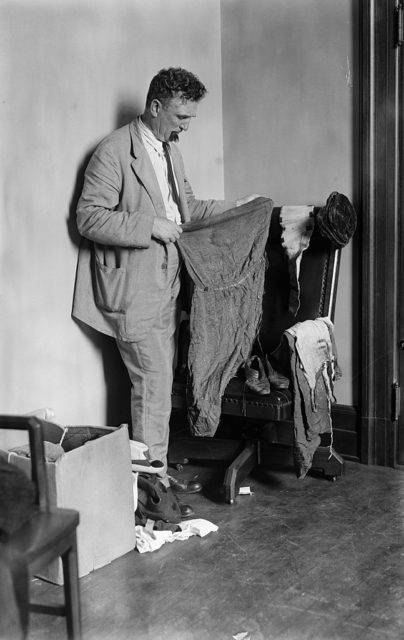 Detective Hanlon of the New Jersey police prepares to exhibit before the court the clothing worn by Reverend Edward Hall and Mrs. Eleanor Mills at the time they were murdered. (Photo Credit: Bettmann/ Getty Images)

The strangest part about the discovery was that there were many love letters that the pair had written to each other, which were torn up and placed between them. Apparently, there were already rumors going around that the two may have been involved given their close relationship, but the fact that they were murdered together and the presence of their love notes confirmed it to those in the town.

When news of the murder broke, interest quickly grew. As it was explained by one writer, “The Hall-Mills case had all the elements needed to satisfy an exacting public taste for the sensational. It was grisly, it was dramatic…it involved wealth and respectability.” The crime scene became a public spectacle with vendors, literally, selling popcorn, peanuts, soft drinks, and balloons to the crowds. 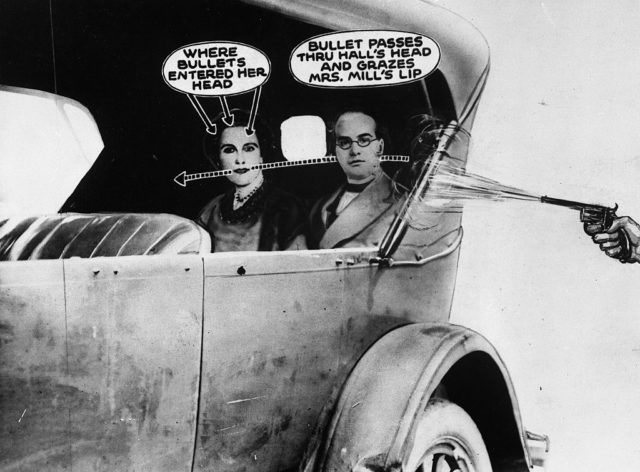 An artist’s conception of how Rev. Edward Hall and Mrs. Eleanor Mills were shot to death, based on the testimony of a Doctor who thought they were shot in a car, then moved. (Photo Credit: Bettmann/ Getty Images)

Initially, the police believed that the case would be solved quickly, with the prime suspects being the Reverend’s wife and her two brothers. Two months into the case, however, they still had no evidence as to who had done it. By the time a jury was assembled, no indictment was made and Mrs. Hall left the country shortly after, which also put an end to the case’s publicity.

It was reopened four years later after the Daily Mirror published repeated articles about the case and its lack of a conclusion. They also said that they had, allegedly, found new evidence. Of course, the resurrection of such a popular case forced it to be reopened. In 1926, Mrs. Hall and her brothers were all arrested for the murder of Mills and Hall.

As if the murder trial wasn’t spectacle enough, with tabloids and large papers alike sending teams to cover it, the woman who came forward as the primary witness made it even more so. Called the “Pig Woman” because she raised pigs, Jane Gibson was suffering from cancer and required constant medical care throughout the trial. She testified in the courtroom from a hospital bed that was brought to the courthouse by ambulance every day. 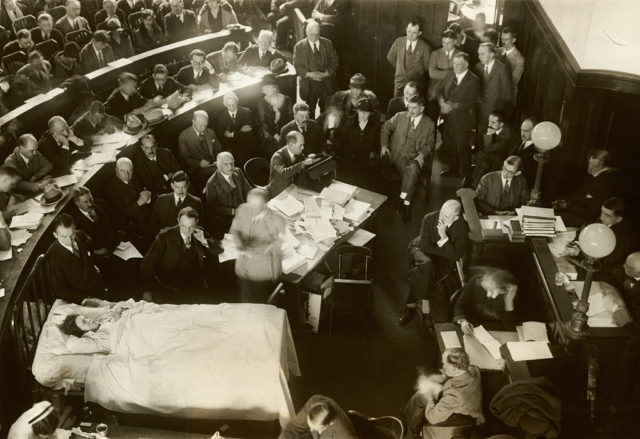 Jane Gibson, one of the star witnesses in the case, testifies from a hospital bed in the Hall-Mills murder trial at Somerville, New Jersey. (Photo Credit: George Rinhart/ Corbis/ Getty Images)

She provided some of the most useful testimony about the Hall-Mills murder during the trial. According to her, she went out on her mule after a barking dog alerted her there might be someone on her property. She saw a man standing in her field so she went to investigate. When she got closer, she could see that there were actually four people standing at the crabapple tree. Following gunshots, one of the people fell to the ground and a woman yelled “Don’t” three times. After hearing more gunshots, Gibson turned to see that a second person had fallen down after yelling “Henry.”

Wrapping up the case

The jury simply chose to believe the testimony of Mrs. Hall, who was given the nickname the “Iron Widow” for her stoic demeanor, over that of Gibson. The case has not officially been reopened since, but there have been many other theories and suspects put forward by the public. 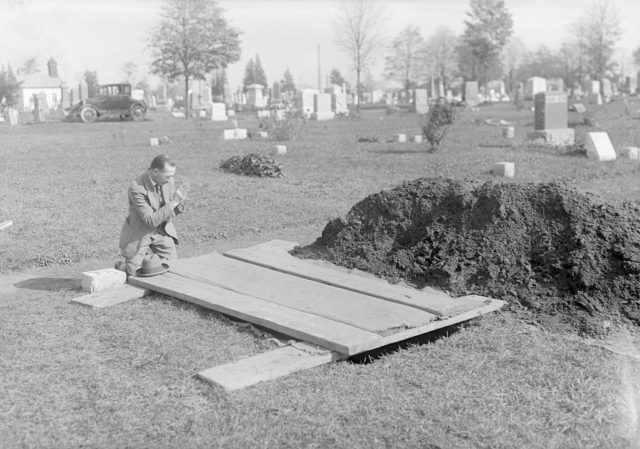 More from us: The Two Major Regrets Paul Newman Had at the Time of His Death

In one instance, a reporter with the Daily Mail tried to get James Mills to confess to the murder by making it appear that his wife was haunting him during a séance, but he maintained his innocence. Although the Hall-Mills case is often overshadowed by sensational murders of the later 1900s, it was one of the most public and closely followed cases of the time.

« Sam Cooke’s Death: Was it Really a Justifiable Homicide?
Steve McQueen’s Acting Career May Have Directly Caused His Death »