The Vostok-based Voskhod 3KD spacecraft with two crew members on board, Pavel Belyayev andAlexey Leonov, was equipped with an inflatable airlock.”On 18 March 1965,Alexey Arkhipovich Leonov  became the first human to conduct extravehicular activity (EVA), exiting the capsule during the Voskhod 2 mission for a 12-minute spacewalk. 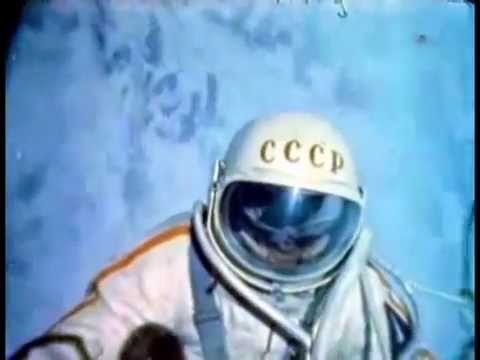 Belyayev then deployed and pressurized the Volga inflatable airlock. The airlock was necessary for two reasons: first, the capsule’s avionics used vacuum tubes, which required a constant atmosphere for air cooling. Also, supplies of nitrogen and oxygen sufficient to replenish the atmosphere after EVA could not be carried due to the spacecraft’s weight limit. By contrast, the American Gemini capsule used solid state avionics, and an atmosphere of oxygen only, at a low pressure of 10 psi (69 kPa), which could easily be replenished after EVA. The Volga airlock was designed, built, and tested in nine months in mid-1964. At launch, Volga fitted over Voskhod 2’s hatch, extending 74 cm (29 in) beyond the spacecraft’s hull. The airlock comprised a 1.2 m (3.9 ft) wide metal ring fitted over Voskhod 2’s inward-opening hatch, a double-walled fabric airlock tube with a deployed length of 2.50 m (8.2 ft), and a 1.2 m (3.9 ft) wide metal upper ring around the 65 cm (26 in) wide inward-opening airlock hatch. Volga’s deployed internal volume was 2.50 m3 (88 cu ft).

The fabric airlock tube was made rigid by about 40 airbooms, clustered as three, independent groups. Two groups sufficed for deployment. The airbooms needed seven minutes to fully inflate. Four spherical tanks held sufficient oxygen to inflate the airbooms and pressurize the airlock. Two lights lit the airlock interior, and three 16mm cameras — two in the airlock, one outside on a boom mounted to the upper ring — recorded the historic first spacewalk.

Belyayev controlled the airlock from inside Voskhod 2, but a set of backup controls for Leonov was suspended on bungee cords inside the airlock. Leonov entered Volga, then Belyayev sealed Voskhod 2 behind him and depressurized the airlock. Leonov opened Volga’s outer hatch and pushed out to the end of his 5.35 m (17.6 ft) umbilicus. He later said the umbilicus gave him tight control of his movements — an observation purportedly belied by subsequent American spacewalk experience. Leonov reported looking down and seeing from the Straits of Gibraltar to the Caspian Sea.

After Leonov returned to his couch, Belyayev fired pyrotechnic bolts to discard the Volga. Sergei Korolev, Chief Designer at OKB-1 Design Bureau (now RKK Energia), stated after the EVA that Leonov could have remained outside for much longer than he did, while Mstislav Keldysh, “chief theoretician” of the Soviet space program and President of the Soviet Academy of Sciences, said that the EVA showed that future cosmonauts would find work in space easy.

The government news agency, TASS, reported that, “outside the ship and after returning, Leonov feels well”; however, post-Cold War Russian documents reveal a different story — that Leonov’s Berkut space suit ballooned, making bending difficult. Because of this, Leonov was unable to reach the shutter switch on his thigh for his chest-mounted camera. He could not take pictures of Voskhod 2, but was he able to recover the camera mounted on Volga which recorded his EVA for posterity but only after it stuck and he had to exert considerable effort to push it down in front of him.After 12 minutes walking in space Leonov re-entered Volga.

Recent accounts report Cosmonaut Leonov violated procedure by entering the airlock head-first, then became stuck sideways when he turned to close the outer hatch, forcing him to flirt with decompression sickness (the “bends”) by lowering the suit pressure so he could bend to free himself. Recently, Leonov said that he had a suicide pill to swallow had he been unable to re-enter the Voskhod 2, and Belyayev been forced to abandon him in orbit.

Doctors reported that Leonov nearly suffered heatstroke — his core body temperature increased by 1.8 °C (3.2 °F) in 20 minutes; Leonov said he was up to his knees in sweat, which sloshed in the suit. In an interview published in the Soviet Military Review in 1980, Leonov downplayed his difficulties, saying that “building manned orbital stations and exploring the Universe are inseparably linked with man’s activity in open space. There is no end of work in this field.”

« Titanic II plans put on hold, most likely won’t ever go through
The “Book Wheel,” was a rotating reading desk that allowed readers to flit among texts by giving the wheel a quick spin … »