Filmed in 1910 this is the oldest known footage of golf

The origins of golf are unclear and much debated. However, it is generally accepted that modern golf developed in Scotland during the Middle Ages. The game did not find international popularity until the late 19th century, when it spread into the rest of the United Kingdom and then to the British Empire and the United States. 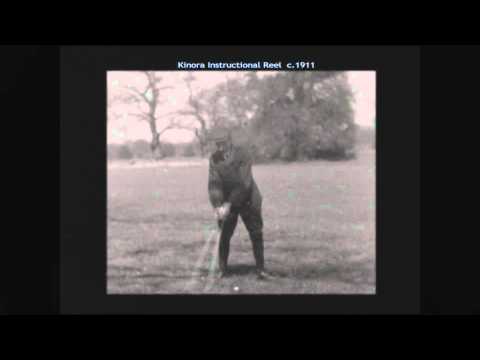 In the 1850s Queen Victoria and Prince Albert built Balmoral Castle in the Scottish Highlands. The railways came to St Andrews in 1852.By the 1860s there were fast and regular services from London to Edinburgh. The royal enthusiasm for Scotland, the much improved transport links and the writings of Sir Walter Scott caused a boom for tourism in Scotland and a wider interest in Scottish history and culture outside of the country. This period also coincided with the development of the Gutty; a golf ball made of Gutta Percha which was cheaper to mass-produce, more durable and more consistent in quality and performance than the feather-filled leather balls used previously. Golf began to spread across the rest of the British Isles. In 1864 the golf course at the resort of Westward Ho! became the first new club in England since Blackheath, and the following year London Scottish Golf Club was founded on Wimbledon Common. In 1880 England had 12 courses, rising to 50 in 1887 and over 1000 by 1914. The game in England had progressed sufficiently by 1890 to produce its first Open Champion, John Ball. The game also spread further across the empire. By the 1880s golf clubs had been established in Ireland, Australia, New Zealand, Canada and South Africa. Singapore followed in 1891. Courses were also established in several continental European resorts for the benefit of British visitors.

Evidence of early golf in what is now the United States includes a 1739 record for a shipment of golf equipment to a William Wallace in Charleston, South Carolina,an advertisement published in the Royal Gazette of New York City in 1779 for golf clubs and balls, and the establishment of the South Carolina Golf Club in 1787 in Charleston.However, as in England, it was not until the late 19th century that golf started to become firmly established.

Several clubs established in the 1880s can make claim to be the oldest extant in the country, but what is not disputed is that as a result of two competing “National Amateur Championships” being played in 1894, delegates from theNewport Country Club, Saint Andrew’s Golf Club, Yonkers, New York, The Country Club, Chicago Golf Club, and Shinnecock Hills Golf Club met in New York City to form what was to become the United States Golf Association (USGA). By 1910 there were 267 clubs.

During the Roaring Twenties the game expanded greatly in popularity and by 1932 there were over 1,100 golf clubs affiliated to the USGA. In 1922 Walter Hagen became the first native born American to win the British Open Championship. The expansion of the game was halted by the Great Depression and World War II, but continued in the post war years. By 1980 there were over 5,908 USGA affiliated clubs. That figure grew to over 10,600 by 2013. Starting slowing in the 1920s, and growing through the 1990s, many residential golf course communities have been built

« Receding ancient Indian river has some secrets to tell.
These 20 Color Photos of Native Americans in the Late 19th and Early 20th Centuries Are Just Outstanding … »