The Mummified Puppies of Tumat Village In 2015, the mummified remains of an ancient puppy were discovered in the steep bank of the River Syalakh in the Unst-Yansky district of Russia. This is a particularly exciting discovery because of a previous puppy, called the Tumat Dog, that had been found in 2011 at the same location, approximately two meters away. Both remains have been dated to be almost 12,500 years old. The body was found by Yuri and Igor Gorokhov and Ayaan Tomsk, all villagers of Tumat. They then donated it to the mammoth museum.

The newly-uncovered puppy is believed to be part of the same litter as the Tumat Dog. Due to the studies of the first puppy, researchers are fairly certain that both were kept as pets and were dogs, not wolves. The cause of death is believed to have been a sudden landslide or burrow collapse.

According to The Siberian Times, the majority of examinations of the puppy are taking place in Yakutsk, the capital of Russia’s Sakha Republic. Sergey Fedorov, the head of the exhibition department of the Museum of the Mammoth, said, “The remains were brought to Yakutsk for our museum.”

Unlike the original Tumat Dog, the animal found in 2015 was very well preserved, having been frozen most of those 12,500 years. Of course, for the post-mortem, experts have thawed the carcass. Dr. Pavel Nikolsky, a research fellow of the Geological Institute in Moscow, noted that the degree of preservation is around seventy to eighty percent. This percentage includes the brain, which is a particular victory for researchers. Dr. Nikolsky notes, “We can say that this is the first time we have obtained the brain of a Pleistocene canid.”

Not only that, but the parencephalon, cerebellum, and the pituitary gland are all visible. More information about the animal will be released once more tests have been completed. The first tests were MRI scans on both puppies. In the case of the Tumat Dog, scientists spent four years studying and DNA-testing the remains, which were kept in a freezer. It wasn’t until April in 2015 that a post-mortem was completed on the original dog. A search was implemented on both dogs to find parasites, ticks, and fleas.

Professor Darima Garmaeva, of the Institute of Medicine, said in June, “What is of real interest is the fact the [Tumat dog] has a completely preserved carcass, which is unique by itself, with nothing like it in the world. Although the tissues are mummified, they have no post-mortem decomposition.”

Perhaps the most interesting development is that Hwang Woo-suk was brought on to the project. The South Korean is a controversial “cloning guru”. Apparently, the mummified puppy might provide the key to bringing back its species from extinction. The degree of preservation of the puppy thrills the cloning guru. He said that he was “satisfied with the degree of preservation” and that he was “very excited” to be involved. Mummified puppy aside, Professor Hwang Woo-Suk is also working to bring the extinct woolly mammoth back to life.

Samples from the animal’s skin, muscles, and ear cartilage were taken by the cloning specialist and his team. As the post-mortem continues, however, Professor Hwang Woo-Suk has said that they hope to take more samples from various parts of the body.

“Later we will compare them with the bacteria from the puppy’s intestines. We hope to find ancient bacteria among them,” he said. For now, it’s a waiting game for the tests and studies to be completed. Until then, the dog’s fate will remain with the researchers in Yakutsk.

Possible human remains were found at the same site. This could indicate that the puppies, or at least some of their kin, were kept as pets or as working dogs for early humans. 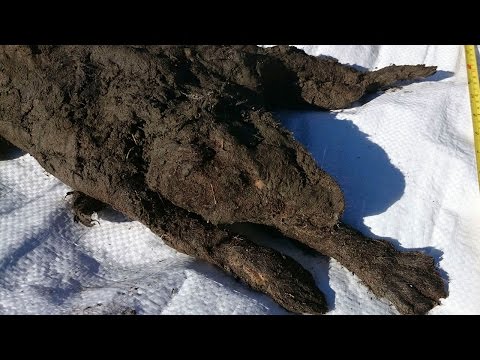 « Guyaju Caves : The ancient stone village in China that looks like Fred Flinstone’s hometown …
An archaeological dig at the boyhood home of Malcolm X in Boston has turned up some surprising findings »