The Winchester Mystery House: A Mansion Designed To Foil Ghosts

In the 1800s, many grieving widows would seek solace with the help of a spirit medium who might connect them with their deceased loved ones. In the case of Sarah Winchester, she was so affected by the message she received that she spent the rest of her life building the Winchester Mystery House — an elaborate house that she hoped with confuse the angry spirits that plagued her.

But others say she was just a grieving woman with a vivid and creative imagination. Whatever the reason behind her lifelong endeavor, the house that Sarah built is a popular tourist attraction that frequently makes recommended destination lists. 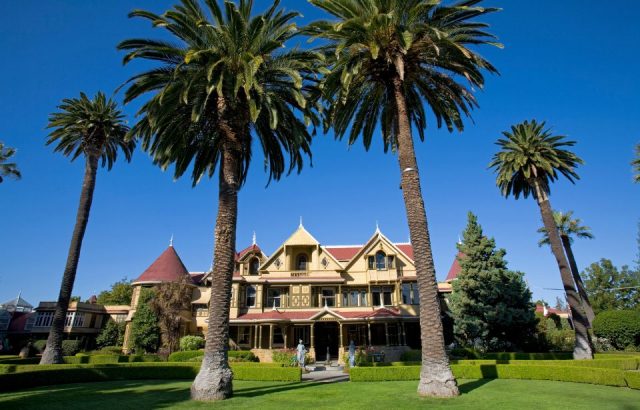 Sarah Lockwood Winchester was the wife of William Wirt Winchester. Her husband’s family invented the Winchester rifle, named “the gun that won the west.” The two of them lived in New Haven until 1881 when William died of tuberculosis.

Rumor has it that Sarah then sought the advice of a medium who channeled her husband’s spirit. William told his wife that the tragedies of his own death and that of their six-week-old daughter were due to angry spirits that were after the family.

These were the ghosts of people who had died from a wound inflicted by a Winchester rifle. William told his wife she had to leave immediately and, since the ghosts would follow her, she had to build a house that would confound them.

In 1884, Sarah purchased 525 South Winchester Boulevard in San Jose, California, and started to create a Queen Anne-style Victorian mansion. Building work would continue almost constantly for the next 38 years.

A unique piece of architecture 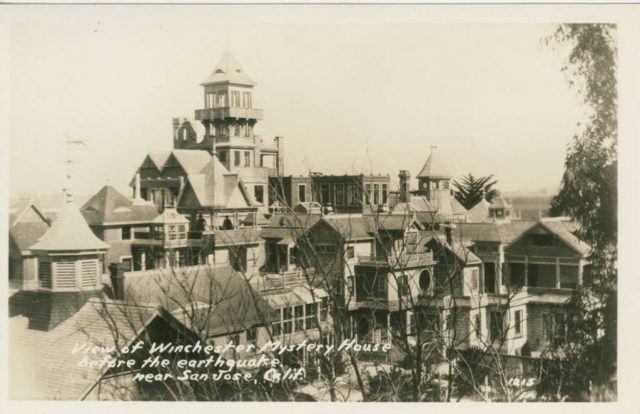 Sarah poured all this money into building a unique house that ended up including 160 rooms, 2,000 doors, 10,000 windows, and 47 stairways and fireplaces. At one point, it reached seven stories high. Unfortunately, the 1906 San Francisco earthquake reduced it down to just four levels.

According to the official Winchester Mystery House Twitter account, Sarah installed 57 skylights and designed the house to ensure that certain areas of the ground floor had natural light.

Did you know Sarah built areas of her house from the top, ALL the way to the ground floor to contain skylight? This allowed for natural light to illuminate the halls! Do you know what these areas are called? pic.twitter.com/Fjyayc58BL

Doors to nowhere and spiderweb windows

Whether due to a fear of ghosts or just a love of puzzles, Sarah incorporated some bizarre but beautiful elements into her home.

Thirteen bathrooms were installed, but only one of them worked. The rest were said to be there to confuse ghosts. There were trapdoors, stairs that ended abruptly, and a door that opened out onto fresh air and a two-story drop to the yard below. 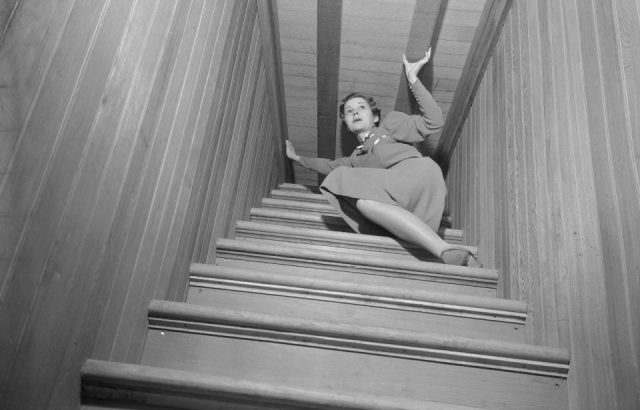 Some of the features which might seem bizarre were actually quite practical or designed for Sarah’s comfort. A trio of elevators was installed so that Sarah, who was plagued by arthritis in her later years, could get around her amazing home. She also installed an indoor shower and decent plumbing.

The spiderweb pattern is a common design found throughout Mrs. Winchester's mansion. Appearing on fireplace mantles, stained-glass windows, and windows like these. What do you think this design meant to Sarah? pic.twitter.com/gGHuNZv2Pq

Legend has it that ghosts help her build it

Some sources suggest that William’s posthumous advice instructed her that the house was to be as much a home to these restless spirits as a place to keep her safe from them. As such, rumors abounded that Sarah actually sought the help of her resident ghosts in designing the house.

She would hold seances in The Witch’s Cap (a peaked turret in the house) then deliver instructions to the foreman the next day. But since various sources say that she met with the foreman every day to discuss her building project anyway, perhaps this is just an exaggerated version of the truth.

When Sarah herself passed away on September 5, 1922, she left all her personal effects to her niece and personal secretary. The niece decided to sell the contents at a private auction, and reports suggest that it took six trucks six weeks to clear the house of everything inside.

One mover allegedly spoke to American Weekly about his experiences, saying that the “downstairs leads neither to the cellar nor upstairs to the roof.”

Surprisingly, the appraisers placed no value on the house due to damage from earthquakes and its unfinished nature. The mansion was sold at auction for over $135,000 before being leased to John and Mayme Brown. 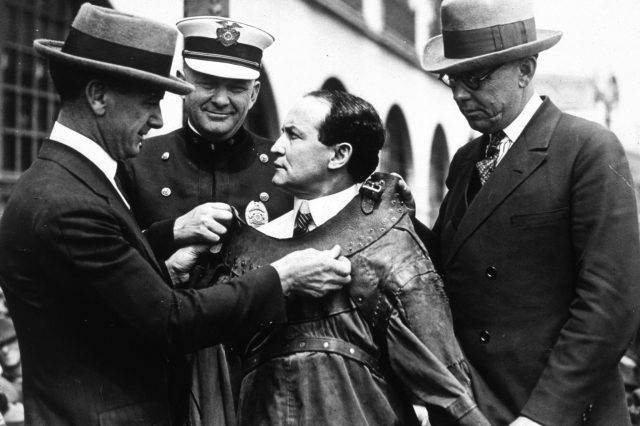 Seeing the value in such an unusual house, the Browns opened the mansion to the public in 1923, and Mayme Brown herself conducted the first tours. The following year, Harry Houdini visited the house. It was he who gave it the lasting name of the Winchester Mystery House.

Since then, around 12 million visitors have wandered around this location, and it has become a national landmark.

The story about her guilt over the gun victims and her fears of ghosts being the driving force behind this mammoth piece of architecture might seize the popular imagination, but some people are putting forward alternative theories behind all her hard work.

For example, Sarah and William worked together to build their New Haven home, so some theorize that she spent her time building in an effort to recapture the good times. 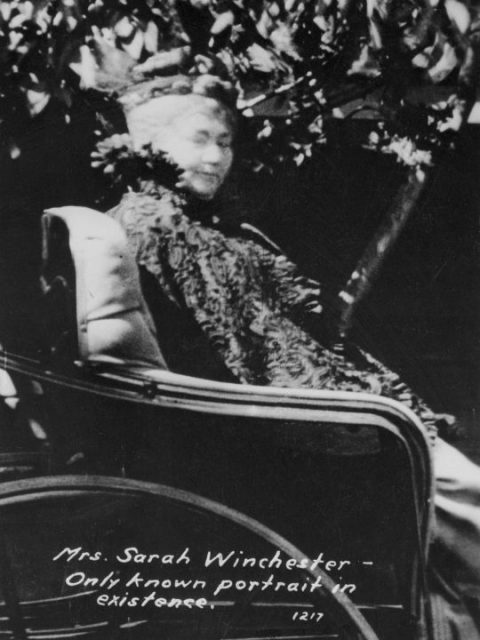 Winchester House historian Janan Boehme, speaking to Vanity Fair in 2018, stated that it was unlikely Sarah did all this work because she felt she was cursed: “People back then didn’t have a massive guilt complex over guns. They were a useful tool, something that people needed for survival.”

Her grief certainly seems to have overwhelmed her, even in California. She led a reclusive life, with only one photograph of her in existence. She also wore black all the time, much as Queen Victoria did when she lost her beloved Prince Albert.

Another theory suggests that she continued additions to her house because it provided local employment opportunities. 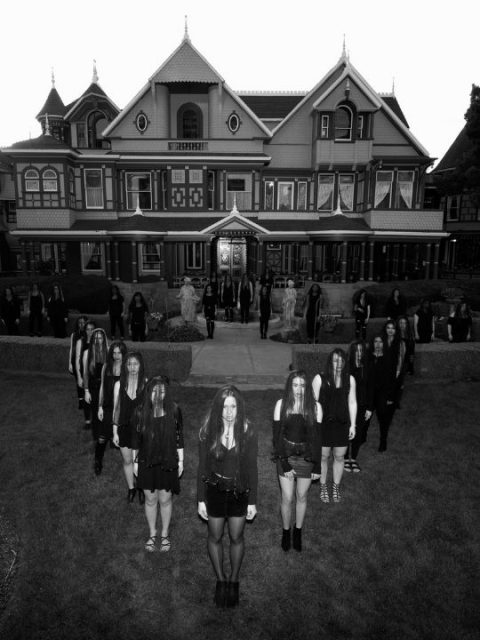 The Vanity Fair article provides information to support that theory, noting that Sarah Winchester spent a lot of money ensuring her staff were comfortable and well-treated. It adds that this earned her an intense amount of loyalty from those who worked for her. Since these people never spoke to journalists about their employer, the general public had to make up their own reasons about why Sarah behaved the way she did.

A film called simply Winchester was released in 2018. Starring Helen Mirren as Sarah Winchester, the movie has been described as “ghost-packed.”

More from us: Tombstone’s Resident Photographers Caught The Wild West In All Its Gritty Glory

Whatever Sarah’s motivations might have been for building such an astounding house, the mansion is something that has stood the test of time. Its mystery today is as inspiring and eerie as it was when the doors first opened in 1923.