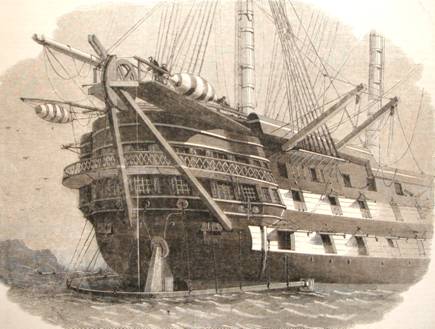 On the 4th August 1858, the Niagara arrived at Trinity Bay being followed on the 5th August by the Agamemnon entering Valentia Bay; the cable had crossed the Atlantic! Now all that was required was to land the cable and connect it to the shore based telegraph stations.

A MAJOR undertaking in its time and in fairness, it still would be today. Back in the 1800s, the seabed wasn’t littered with thousands upon thousands of tons of wrecks from two world wars.

The only battle of the War of 1812 in which there were heavy casualties was the Battle of New Orleans, fought on 8 January 1815. It was a decisive victory for the US but there was one major problem: the Treaty of Ghent ending the war had been signed on 24 December 1814 — about two weeks prior to the battle! Neither side was aware that the war was over.This was, of course, normal for the times. News could only travel as fast as the swiftest horse or the fastest sailing ship. At the time, news rarely reached North America from Europe in under two weeks.In the 1830s a number of experiments were being conducted in both the US and Britain on telegraphy, the early uses being confined to railroads.

The first practical use however must be credited to Professor Samuel Morse, the inventor of Morse code, who sent a message via what was then known as magnetic telegraph from Baltimore to Washington. Thirty years later, history books were saying “no other invention has exercised a more beneficent influence on the welfare and happiness of the human race.” After the first successful demonstration, telegraph lines were rapidly built all over Europe and North America, allowing messages to be sent virtually instantaneously.Crossing the water presented greater problems. The cable needed to be insulated and strong, technologies that were both in their infancy. The first major undersea link, connecting England to France, was not completed until 1851 after several failed attempts.

Map of the 1858 trans-Atlantic cable route

In the 1840s and 1850s several individuals proposed or advocated construction of a telegraph cable across the Atlantic Ocean, including Edward Thornton and Alonzo Jackman. Cyrus West Field and the Atlantic Telegraph Company were behind the construction of the first transatlantic telegraph cable. The project began in 1854 and was completed in 1858. The cable functioned for only three weeks, but it was the first such project to yield practical results. The first official telegram to pass between two continents was a letter of congratulation from Queen Victoria of the United Kingdom to the President of the United States James Buchanan on August 16. 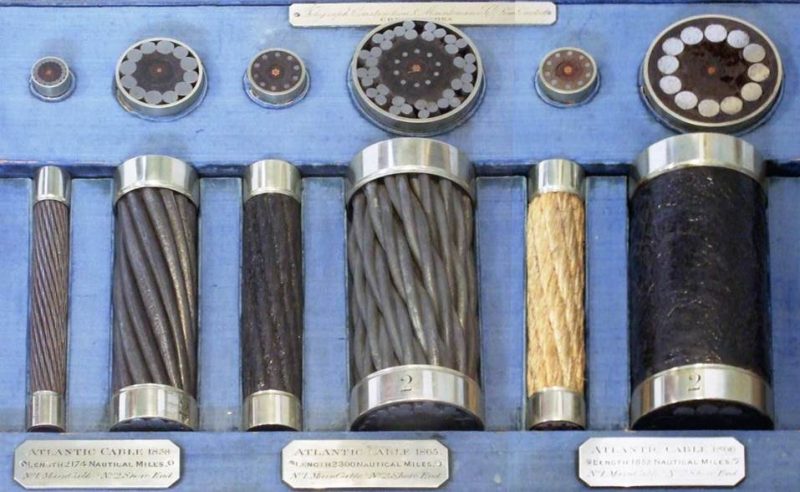 The Evolution of Undersea Cables. source

Signal quality declined rapidly, slowing transmission to an almost unusable speed. The cable was destroyed the following month when Wildman Whitehouse applied excessive voltage to it while trying to achieve faster operation. It has been argued that the faulty manufacture, storage and handling of the 1858 cable would have led to premature failure in any case. The cable’s rapid failure undermined public and investor confidence and delayed efforts to restore a connection. A second attempt was undertaken in 1865 with much-improved material and, following some setbacks, a connection was completed and put into service on July 28, 1866. This cable proved more durable.

Before the first transatlantic cable, communications between Europe and the Americas took place only by ship. Sometimes, however, severe winter storms delayed ships for weeks. The transatlantic cable reduced communication time considerably, allowing a message and a response in the same day. Five attempts to lay a cable were made over a nine-year period – one in 1857, two in 1858, one in 1865, and one in 1866. Lasting connections were finally achieved with the 1866 cable and the 1865 cable, which was repaired by Isambard Kingdom Brunel’s ship the SS Great Eastern, captained by Sir James Anderson. In the 1870s duplex and quadruplex transmission and receiving systems were set up that could relay multiple messages over the cable.

Additional cables were laid between Foilhommerum and Heart’s Content in 1873, 1874, 1880, and 1894. By the end of the 19th century, British-, French-, German-, and American-owned cables linked Europe and North America in a sophisticated web of telegraphic communications. 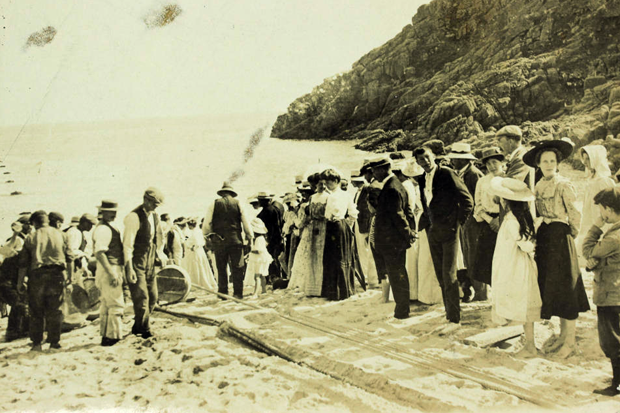 William Cooke and Charles Wheatstone introduced their working telegraph in 1839. As early as 1840 Samuel F. B. Morse proclaimed his faith in the idea of a submarine line across the Atlantic Ocean. By 1850 a cable was run between England and France. That same year Bishop John T. Mullock, head of the Roman Catholic Church inNewfoundland, proposed a telegraph line through the forest from St. John’s to Cape Ray, and cables across the Gulf of St. Lawrence from Cape Ray to Nova Scotia across theCabot Strait.

At about the same time a similar plan occurred to Frederick Newton Gisborne, a telegraph engineer in Nova Scotia. In the spring of 1851, Gisborne procured a grant from the legislature of Newfoundland and, having formed a company, began the construction of the landline. In 1853 his company collapsed, he was arrested for debt and he lost everything. The following year he was introduced to Cyrus West Field. Field invited Gisborne to his house to discuss the project. From his visitor, Field considered the idea that the cable to Newfoundland might be extended across the Atlantic Ocean.

Field was ignorant of submarine cables and the deep sea. He consulted Morse as well as Lieutenant Matthew Maury, an authority on oceanography. Field adopted Gisborne’s scheme as a preliminary step to the bigger undertaking, and promoted the New York, Newfoundland and London Telegraph Company to establish a telegraph line between America and Europe.

With Charles Tilston Bright as chief engineer, Field then directed the transoceanic cable effort. A survey was made of the proposed route and showed that the cable was feasible. Funds were raised from both American and British sources by selling shares in the Atlantic Telegraph Company. Field himself supplied a quarter of the needed capital. 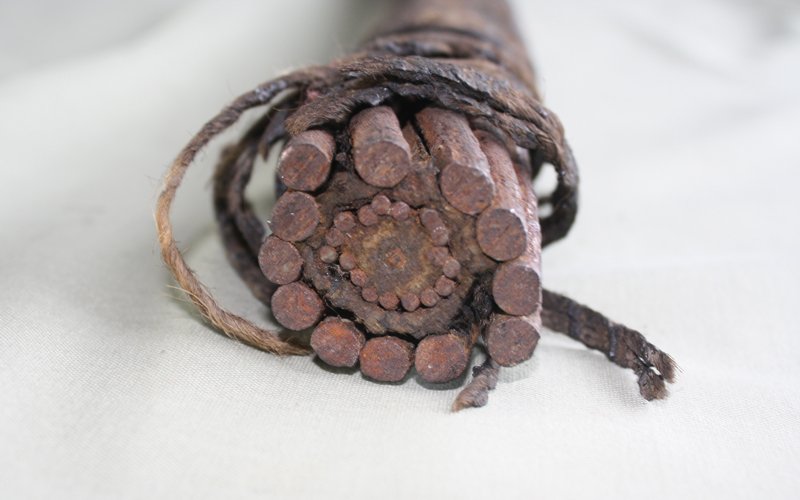 Is this a section of the Transatlantic Cable crucial to communication between Europe and North America. source

The cable consisted of seven copper wires, each weighing 26 kg/km (107 pounds per nautical mile), covered with three coats of gutta-percha, weighing 64 kg/km (261 pounds per nautical mile), and wound with tarred hemp, over which a sheath of 18 strands, each of seven iron wires, was laid in a close spiral. It weighed nearly 550 kg/km (1.1 tons per nautical mile), was relatively flexible and was able to withstand a pull of several tens of kilonewtons (several tons). It was made jointly by two English firms – Glass, Elliot & Co., of Greenwich, and R. S. Newall & Co., of Birkenhead. Late in manufacturing it was discovered that the respective sections had been made with strands twisted in opposite directions. While the two sections proved a simple matter to join, this mistake subsequently became magnified in the public mind.

The British government gave Field a subsidy of £1,400 a year and loaned the ships needed. Field also solicited aid from the U.S. government. A bill authorizing a subsidy was submitted in Congress. The subsidy bill passed the Senate by a single vote, due to opposition from anglophobe senators. In the House of Representatives, the bill encountered similar resistance, but passed, and was signed by President Franklin Pierce. 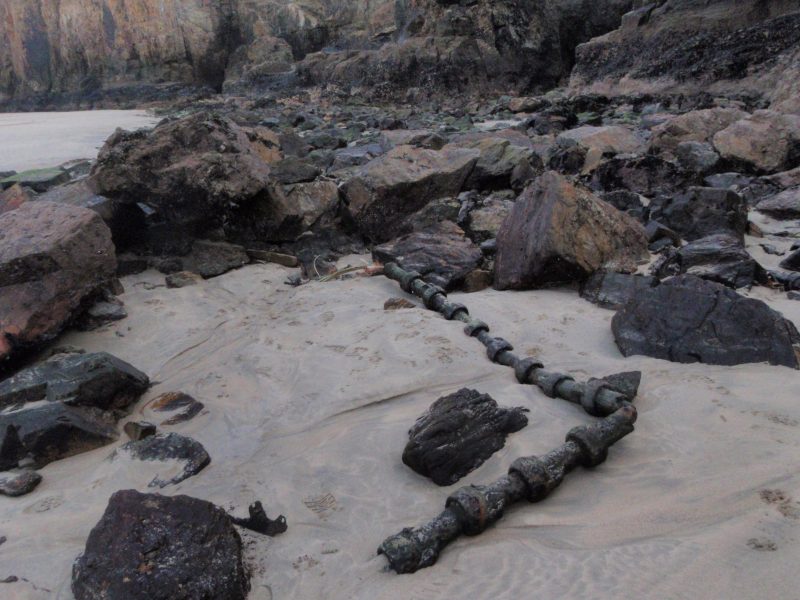 The first attempt, in 1857, was a failure. The cable-laying vessels were the converted warships HMS Agamemnon and USS Niagara. The cable was started at the white strand near Ballycarbery Castle in County Kerry, on the southwest coast of Ireland, on August 5, 1857. The cable broke on the first day, but was grappled and repaired; it broke again over the “telegraph plateau”, nearly 3,200 m (2 statute miles) deep, and the operation was abandoned for the year.

The following summer, after experiments in the Bay of Biscay, Agamemnon and Niagara tried again. The vessels were to meet in the middle of the Atlantic, where the two halves of the cable were to be spliced together, and while Agamemnon paid out eastwards to Valentia Island, Niagara was to pay out westward to Newfoundland. On June 26, the middle splice was made and the cable was dropped. Again the cable broke, the first time after less than 5.5 km (three nautical miles), again after some 100 km (54 nautical miles) and for a third time when about 370 km (200 nautical miles) of cable had run out of each vessel.

The expedition returned to Queenstown, and set out again on July 17, with little enthusiasm among the crews. The middle splice was finished on July 29, 1858. The cable ran easily this time. Niagara arrived in Trinity Bay, Newfoundland on August 4 and the next morning the shore end was landed. Agamemnon made an equally successful run. On August 5, she arrived at Valentia Island, and the shore end was landed at Knightstown and then laid to the nearby cable house.

On August 16, 1858 the first message sent via the cable, other than technical messages sent by the electricians setting up the system, was, “Europe and America are united by telegraphy. Glory to God in the highest; on earth, peace and good will toward men,” sent from England. Queen Victoria then sent a telegram of congratulation to President James Buchanan at his summer residence in the Bedford Springs Hotel in Pennsylvania and expressed a hope that it would prove “an additional link between the nations whose friendship is founded on their common interest and reciprocal esteem.” The President responded that, “it is a triumph more glorious, because far more useful to mankind, than was ever won by conqueror on the field of battle. May the Atlantic telegraph, under the blessing of Heaven, prove to be a bond of perpetual peace and friendship between the kindred nations, and an instrument destined by Divine Providence to diffuse religion, civilization, liberty, and law throughout the world.” The messages were hard to decipher – Queen Victoria’s message of 98 words took sixteen hours to send.

These messages engendered an outburst of enthusiasm. The next morning a grand salute of 100 guns resounded in New York City, the streets were decorated with flags, the bells of the churches were rung, and at night the city was illuminated.