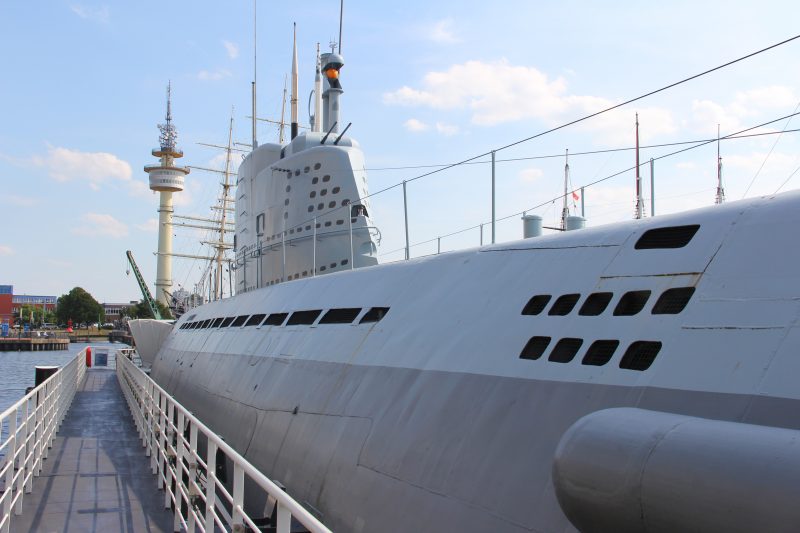 U-2540 was an advanced submarine which entered service on 24th February 1945. Less than 3 months later, on 4th May, she was scuttled by her own crew.

In 1957, she was raised and returned to service on 1st September 1960 as the research submarine Wilhelm Bauer. She served in a civilian role under various research projects before decommissioning on 15th March 1982.

On 24th April 1984, she was transferred to the Deutsches Schiffahrtsmuseum (German Maritime Museum) as the Technikmuseum Wilhelm Bauer. 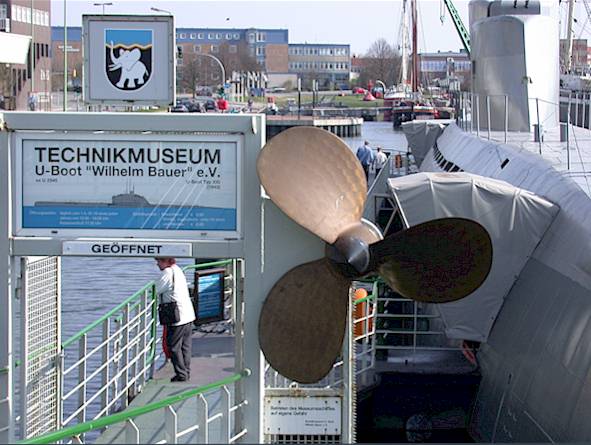 The entrance to the museum is adorned by two propellers, one of which is shown here. I’m quite certain that these are the original propellers of this U-boat. source

In the spring of 1943, Germany was clearly losing the battle of the Atlantic. Improvements in Allied escort material and tactics, combined with cracking the German military code dramatically increased the U-Boats´ losses, rendering them near useless.

The German high command saw its best reaction in the speedy development of improved submarines.

These were meant to overcome the shortcomings of the current types VII and IX, especially their low speed and little underwater endurance. A future submarine would have to be fast, silent and able to operate submerged for any given time to evade enemy aircraft.

In the long run, the Germans saw their biggest potential in a propulsion independent from surface air, made possible by the Walter turbine (we aircraft modellers know Mr. Walter for his RATO pods used to bolster the thrust of German aircraft on take-off).

It utilised Hydrogen peroxide as fuel; this system would give the boat a hitherto impossible underwater speed of more than 20 knots, yet only limited range. Sources wiki /wiki /uboataces

Two submarine hulls were in the developing stage that would make use of the system. The larger one, the Type XVIII, was designed for long-range operations.

It combined a diesel-electric powerplant for long-range duty (getting into the operations area and back) with a Walter turbine (for underwater attack use only).

Thus, the hull grew rather large, yet was designed with a streamlined perfection hitherto unknown. The smaller craft, the Type XXII, would be used near the shore and was much smaller.

The project was delayed by the complicated and largely untested power plant: It was felt that it would take several years for it to achieve sufficient reliability for combat use.

Moreover, the current production of Hydrogen peroxide was much too small for the projected needs of a large submarine fleet; so adequate capacities would have to be built up beforehand.

In this situation in the spring of 1943, with dozens of boats lost to Allied forces, as an interim solution it was decided to mate the hulls of the projected Walter boats with conventional powerplants, although with three times the battery capacity than hitherto.

This were the types XXI and XXIII which should help turn the tide of the war. Until their deployment, the current types, successively equipped with snorkels, had to soldier on despite staggering losses and somehow bind Allied forces.

The Type XXI was a bigger boat than the Type VII; it was well designed and resembled in no way a stopgap construction.

The new boat’s hull was designed for high underwater speeds; its shape reflected a change in design: All earlier submarines had essentially been surface vessels that submerged for short spells – this would be a real submarine for the first time.

The streamlined shape of the hull and the conning tower produced less noise and made detection by acoustics harder.

Moreover, the engines´ efficiency was nearly doubled, giving the Type XXI a top submerged speed of nearly 18 knots for short periods of time.

The vessel’s detectability by Sonar or ASDIC could not be altogether eliminated, but in the event it turned out that the new boats were much harder to detect than their predecessors on account of their optimised shape and silent engines. They were also able to sail much faster in silent mode than hitherto.

Officers´ mess. That would also turn into their bunks.source

In April 1945 the boat went to the front after training at Rønne on Bornholm.

Due to the ongoing fuel shortages at the end of the war, the boat was relocated to Swinemünde before being scuttled near the Flensburg lightship on 4 May 1945. 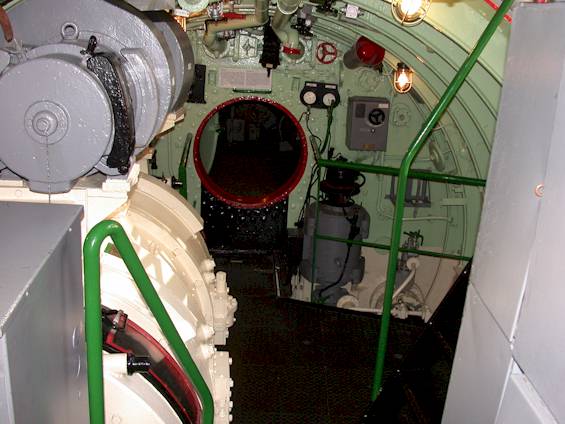 View into elctrical engine room. The port engine has been removed to allow the visitors some movement, I can barely imagine how the crew moved around in here with both engines in place. source 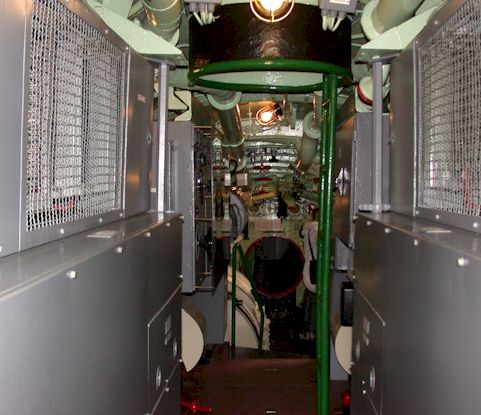 U-2540 was fitted with six 21.0 in torpedo tubes in the bow and four .8 in anti-aircraft guns. She could carry twenty-three torpedoes or seventeen torpedoes and twelve mines. The complement was five officers and fifty-two men. 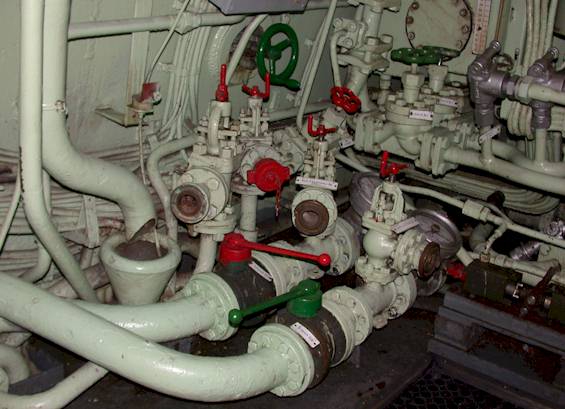 More valves … these are for the trim cells. source 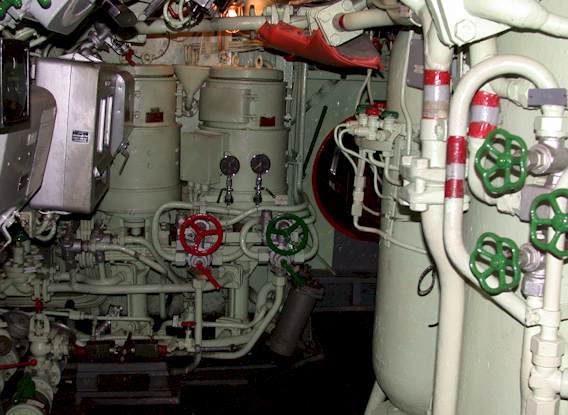 View into the control room. source

In June 1957, after more than 12 years on the floor of the Baltic Sea, U-2540 was raised and overhauled at Howaldtswerke,Kiel. The submarine was commissioned as a research vessel in the Bundesmarine, serving from 1 September 1960 until 28 August 1968 as a test boat (class 241).

On relaunch she was renamed Wilhelm Bauer, after the designer of the first German U-boat, Brandtaucher, built in Kiel by August Howaldt in 1850.

From May 1970 she again entered service, this time with a civilian crew and served as a testbed for the technical innovations of the class 206 U-boat.

After an underwater collision with the German destroyer Z-3 (D172) on 6 May 1980 Wilhelm Bauer was discharged from use at Eckernförde on 18 November 1980 and finally released from service on 15 March 1982.

The boat was restored to its original World War II configuration after its transfer in August 1983 to the Seebeck yard, opening on 27 April 1984 as a museum ship, now sponsored by the Wilhelm Bauer Technology Museum association.

It has imitation twin 30mm cannon and the bridge is not glazed as it was during service with the Bundesmarine.

« The Evolution of Selfie: Women taking Photobooth selfies from 1900s to 1970s
These photos reveal how Disney’s animators used a real-life model to draw Alice In Wonderland »