Kutná Hora in central Czech Republic is a picturesque town dating from medieval times, with well-preserved castles and other historical remnants at its core. However, a site which certainly attracts most of the tourists is not located in the town itself but rather on its outskirts.

It is the Sedlec Ossuary, famous for numerous skulls and bones decorating its interior.

Founded as a monastery in 1278 at the request of the Bohemian king Ottokar II, and by the hand of Henry, a monk of the Cistercian order and the abbot of Sedlec. It was a result of Henry’s diplomatic mission to Jerusalem, from which he returned with a handful of soil taken from Golgotha. 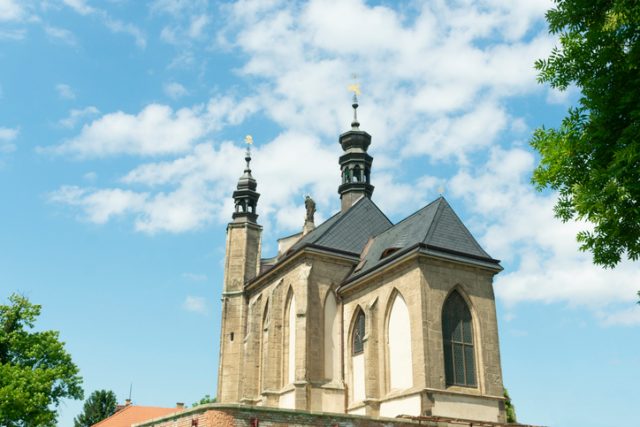 Kutna Hora, Czech Republic, Chapel of All Saints with the Kostanese.

The soil from the place where Christ was presumably crucified was scattered around the monastery’s foundation, with the intention of sanctifying a future graveyard on the spot. Once the graveyard was established, its reputation grew thanks to this trait and it soon became popular among the Bohemian nobility and wealthy people all across Central Europe. 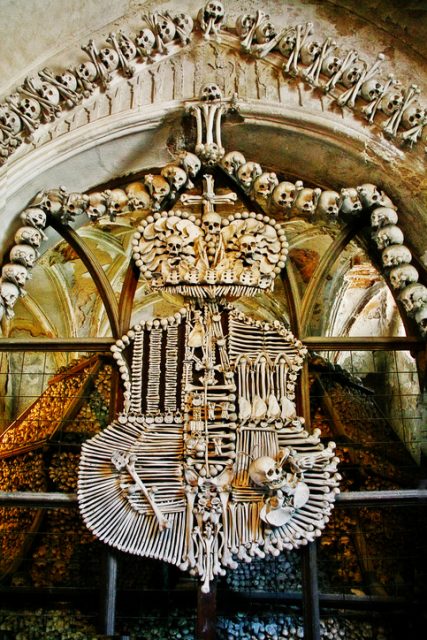 The artwork inside the church was created by František Rint

Even though the graveyard and the monastery became a sort of a prestigious location reserved for the rich to forever rest in peace, a 14th century plague brought in an influx of corpses from all social classes. 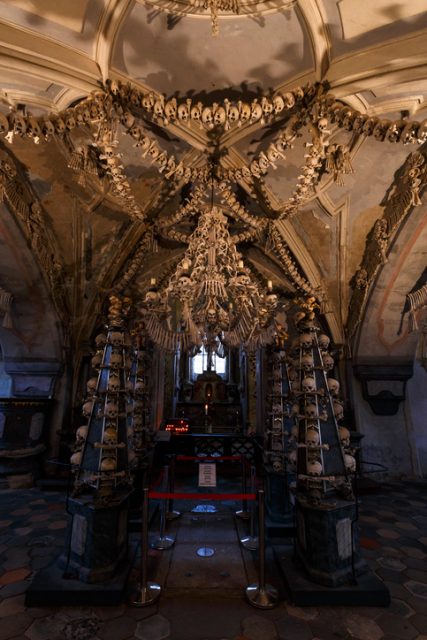 By mid-century, more than 30,000 people were laid to rest around Sedlec Abbey, most of them victims of the Black Death. Less than 100 years later, the land was caught up in yet another turmoil. 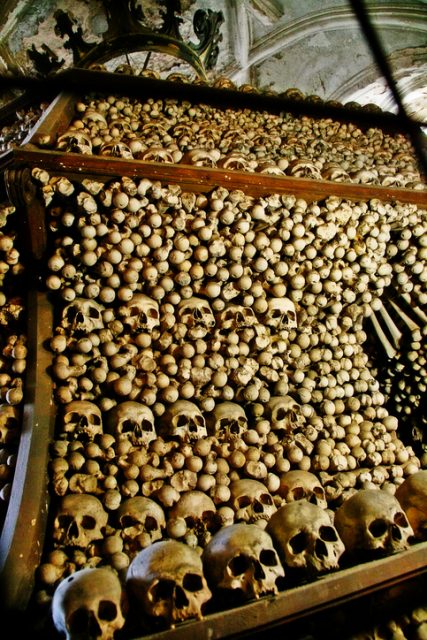 It came in the form of a civil war and a crusade organized by the Catholic Church which left the country in ruins, with numerous casualties. The crusade was directed towards the followers of a pre-Lutheran religious leader, Jan Hus, who gained great support in Bohemia, but caused the wrath of the Pope in return. 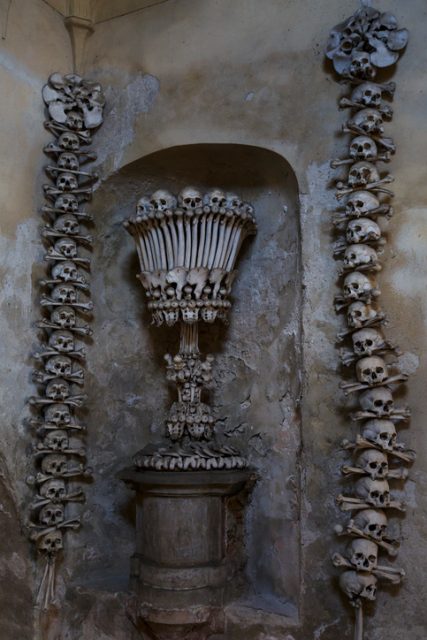 After more than a decade of wars and famine, the lands under the Bohemian Crown were decimated. The Sedlec cemetery grew even more in numbers. 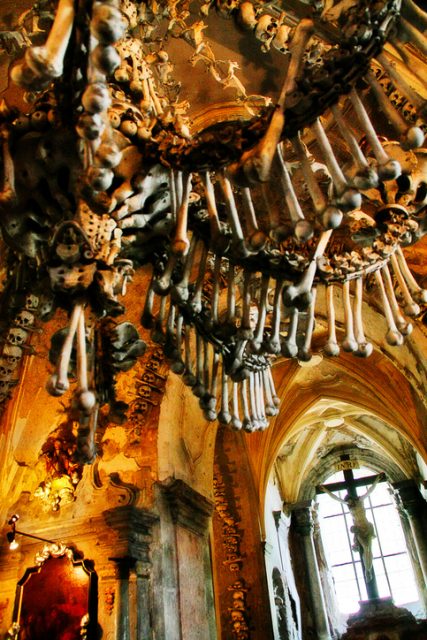 In the meantime, a Church of All Saints was erected by one of the Sedlec abbots. Built in the dominant architectural style of the era ― commonly referred to as Gothic ― the structure itself is located in the center of the cemetery and contains a vaulted upper level and a lower chapel. The chapel was designed to serve as an ossuary for the mass graves that had been unearthed during its construction. 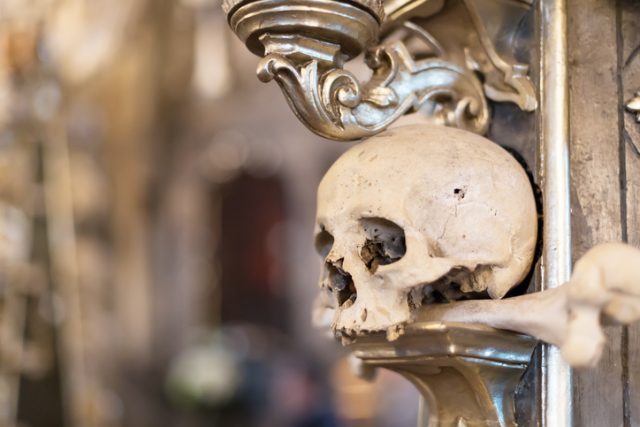 By early 16th century, the Sedlec graveyard had been used for the burial of tens of thousands of people, and in 1511 a special order was given to an unnamed half-blind monk of the monastery to conduct an exhumation of skeletons and their subsequent stacking inside the chapel.

The next great restoration came in the period between 1703 and 1710, when Jan Santini Aichel, a Czech architect of Italian descent, decided to add a flare of Baroque into this religious complex. 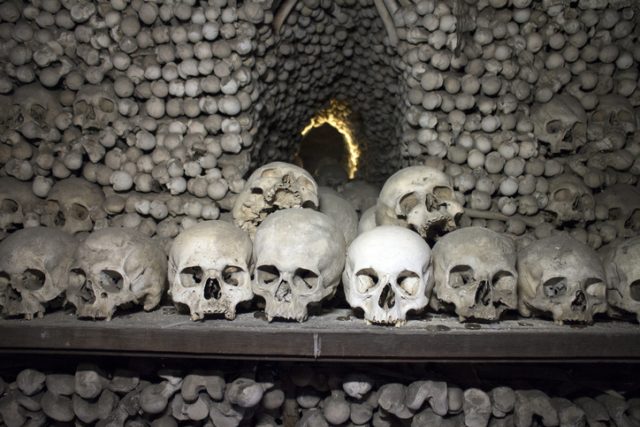 The upper chapel was rebuilt and a new entrance was created with the role of supporting the front wall, which had by then began leaning forward and threatening to collapse.

Finally, in 1870, its interior was put in the macabre form which today attracts more than 200,000 visitors per year. Under the sponsorship of a German-Bohemian noble family, the Schwarzenbergs, a talented woodcarver was employed to make use of more than 60,000 bones that had amassed inside the chapel over the course of time.

His name was František Rint and his work would leave a mark on Czech religious art, similar to the one left in Italy by Michelangelo with the ceiling of the Sistine Chapel, more than 350 years earlier. 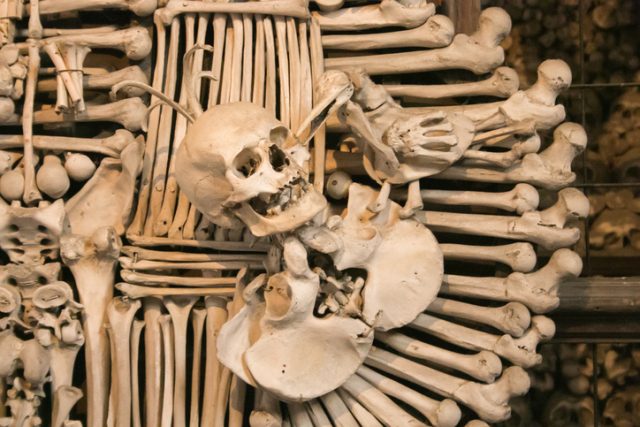 Close up detailed view of skulls in Sedlec Ossuary, Church of Bones in Kutna Hora, decorated with real human skeletons.

Marvelously made, the bones and the skulls form a truly remarkable sight ― one that is compliant with the idea that death is a natural part of life. Skulls containing candles light up the hallways of the chapel, leaving an eerie sense of unpleasant. However according to an employee of Sedlec Ossuary and Church of All Saints, Vendula Krůlová, who was interviewed by National Geographic:

“It is a transcendental place, full of questions. Somebody finds here the peace, somebody anxiety. Everybody is different, but for sure we know, that one day we will be the same as people in the ossuary: Memento mori.” 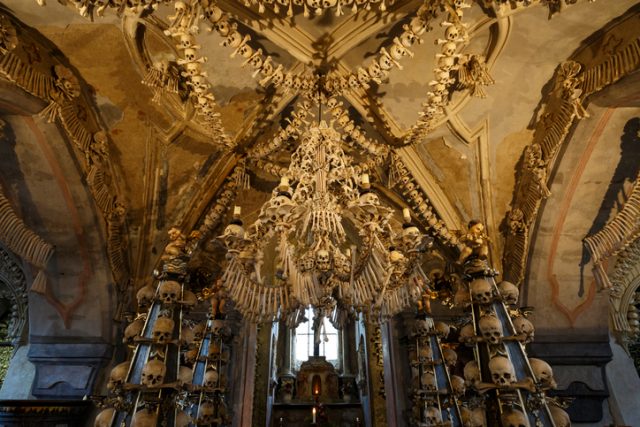 Entryways are framed within strings of skulls with chalices and crosses made from hips and femurs hanging from the walls. Rint worked tirelessly crafting his masterpiece, investing a huge effort in constructing four magnificent chandeliers, designed to incorporate every single bone of the human body. 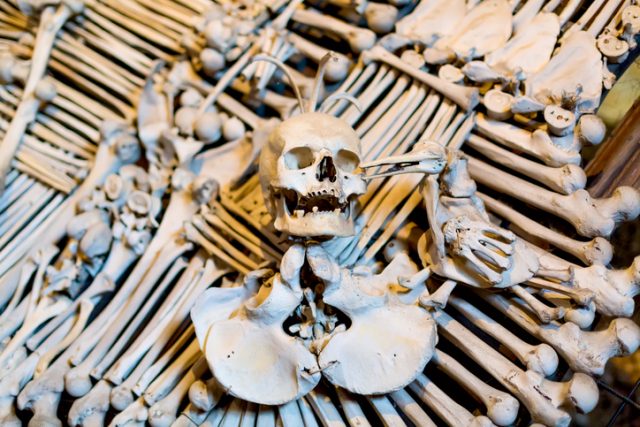 Meticulously carved, the chandeliers present the pinnacle of Rint’s work, together with the Schwarzenberg coat of arms, made out of polished bones. After finishing his work, the humble artist left signed himself on a plaque as “František Rint from Česká Skalice.” 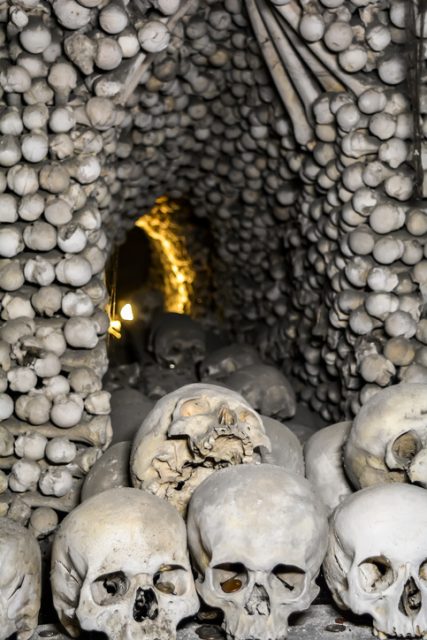 The Sedlec Ossuary (Czech: Kostnice v Sedlci) is a small Roman Catholic chapel. The ossuary is estimated to contain the skeletons of between 40,000 and 70,000 people, whose bones have, in many cases, been artistically arranged to form decorations and furnishings for the chapel.

Despite the Sedlec Ossuary being among the most popular tourist destinations in the Czech Republic, it isn’t the only structure to feature human bones as building material ― the Ossuary in the Church of St James, in Brno, holds the remains of around 50,000 people, with their skulls built into the walls of a crypt.

Other famous crypts include the Paris Catacombs in France and Capela dos Ossos in Évor, Portugal, but none of them feature the sort of craftsmanship and even obsession as the Sedlec Ossuary in Kutná Hora.

« The Only Civilian Casualty at Gettysburg – The Unlucky Fate of Jennie Wade
George Washington and Marijuana: Fact vs Fiction »