Side saddle, an elegant equestrian form from the past … …

Side saddle riding is a form of equestrianism that uses a type of saddle which allows a rider (usually female) to sit aside rather than astride an equine. Sitting aside dates back to antiquity and developed in European countries in the Middle Ages as a way for women in long skirts (when they were mandatory) to ride a horse in a modest fashion while also wearing fine clothing. It has retained a niche in equestrianism even in the modern world.

This ancient form of horse riding is actually still popular today and it even has its own organization, the International Side Saddle Organization (ISSO). The members of this unique club prefer to ride their horses aside rather than astride. 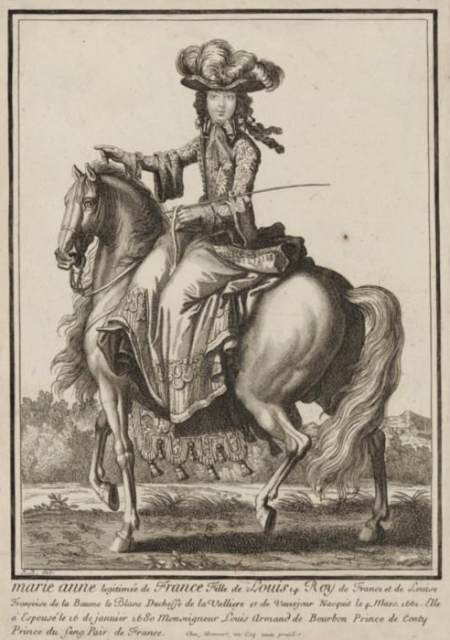 The earliest depictions of women riding with both legs on the same side of the horse, can be seen in Greek vases, sculptures, and Celtic stones. Ninth century depictions show a small footrest or planchette added to the pillion. These designs did not allow a woman to control a horse; she could only be a passenger.

The earliest functional “sidesaddle” was credited to Anne of Bohemia (1366–1394). It was a chair-like affair, where the woman sat sideways on the horse with her feet on a small footrest. The design made it difficult for a woman to both stay on and use the reins to control the horse, so the animal was usually led by another rider, sitting astride. 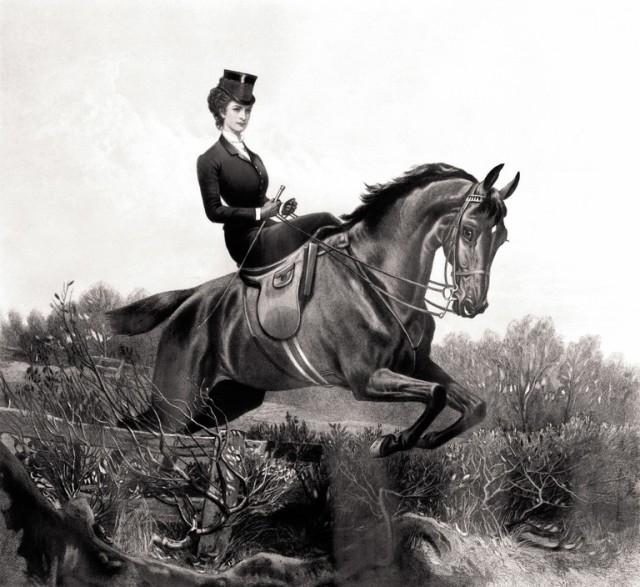 A more practical design, developed in the 16th century, has been attributed to Catherine de’ Medici. In her design, the rider sat facing forward, hooking her right leg around the pommel of the saddle with a horn added to the near side of the saddle to secure the rider’s right knee. The footrest was replaced with a “slipper stirrup”, a leather-covered stirrup iron into which the rider’s left foot was placed. This saddle allowed the rider both to stay on and to control her own horse, though at slower speeds. 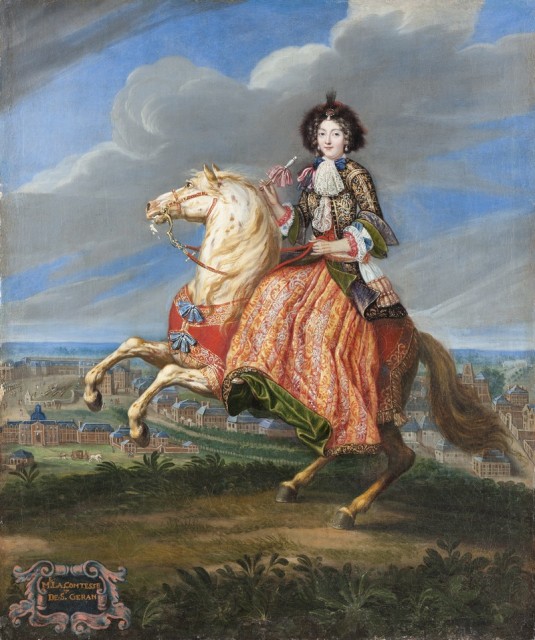 In the 1830s, Jules Pellier invented a sidesaddle design with a second, lower pommel to the side saddle.  the additional horn gave women, both increased security and additional freedom of movement when riding sidesaddle, which allowed them to stay on at a gallop and even to jump fences while fox hunting and show jumping. With this design, nearly all recreational equestrian pursuits were opened to women, yet they could also conform to expectations of modesty. The leaping horn was the last major technological innovation for the sidesaddle and remains the core of basic design even for modern saddles. 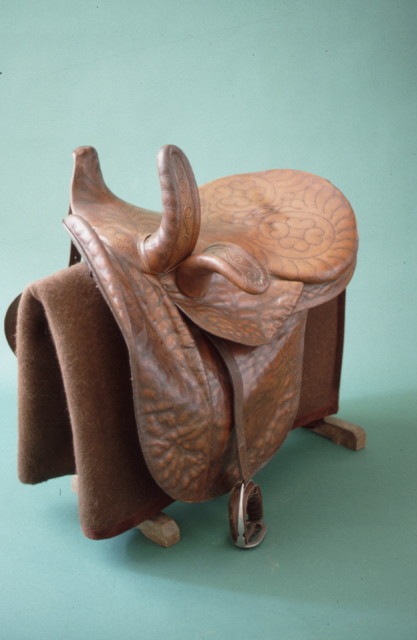 Besides all the innovations, a major safety problem while riding sidesaddle were the long skirts. They could get caught in the stirrups and cause the rider to fall. After many accidents, a solution was presented in the late 19-th century, the side saddle apron. It resembled a long skirt from the front, but had a gap in the back so the legs could be free.

The 20th century brought changes in the attire that was required for side saddle. The new standard clothes for riding consisted of a jacket, breeches, boots, waistcoat and apron with a silk or bowler. The rise of the women’s suffrage movement played a major role for this changes. Women rejected traditional restrictions on their physical activities as well as seeking greater social, political and economic freedoms. The rise of women’s equality made modesty old-fashioned and female riders felt more comfortable riding astride. The side saddle fell out of general use for several decades. 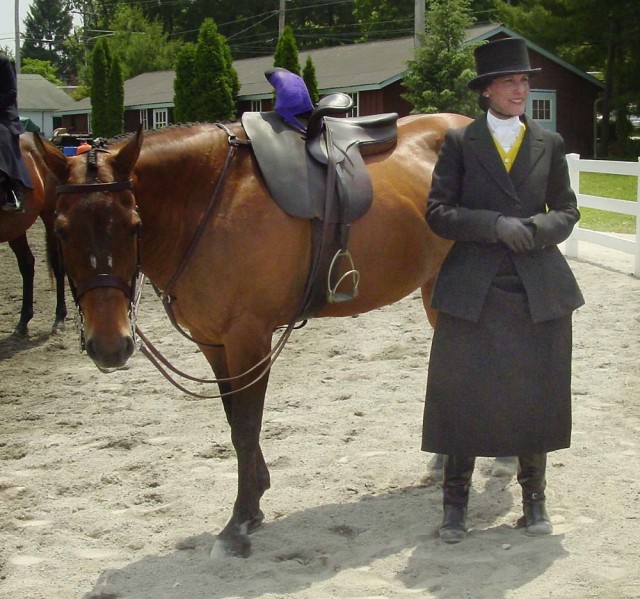 Although it wasn’t mandatory anymore, many aficionados kept the tradition alive until the sports riding side saddle had its revival in the 1970s. Which bring us to the present. You will probably ask yourself why is it still popular? This is a more difficult form of riding than the standard and it also brings up some quite outdated associations of femininity. Janet Senior, chair of the Side Saddle Association (SSA) in the U.K. has an explanation: “It uplifts the rider giving a feeling of grace and elegance.”

The SSA was established in 1974 and according to them, it was formed because  “riders and spectators began to miss the beauty and elegance which side saddle riders had contributed to the pre-War equestrian scene.” Besides this club, there are many other Side saddle organizations, like the U.S.-based International Side Saddle Organization (ISSO). 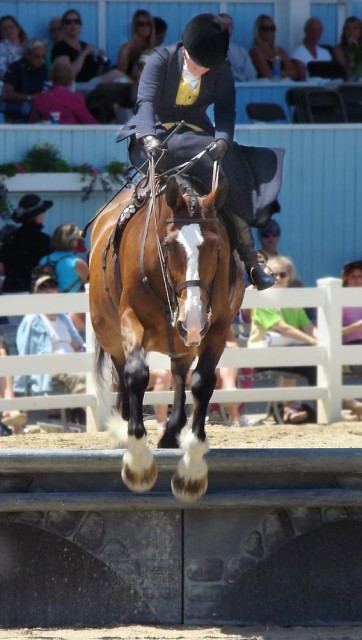 Jumping with a side saddle. / Source

Today, there are many categories of side saddle riding. There are equestrian events with strict rules regarding dress, behavior, and appearance, like for example a Hunter Class event in the U.S. the United States Equestrian Federation requires you to respect a long list of guidelines: Your gold tie pin must sit horizontally rather than vertically, your coat buttons must be “black bone,” and, in accordance with traditional hunting equipment, you need to carry a sandwich case and flask on your person. The sandwich case “must contain a sandwich, wrapped, and flask must contain sherry or tea.”

Side saddling is a minority sport today because of technical issues. It is really difficult to obtain a functional side saddle and accompanying equipment because they are out of mass production. A solid sidesaddle costs thousands of dollars, and only a few people make them today. Most of the riders that enjoy this sport have vintage saddles and even those are rare and not in good condition. It is difficult to fit them on a horse properly.

The principles of medieval female modesty and etiquette are maybe outdated now, in the 21st century, but recreating this old form of horse riding, revives the elegance of that bygone era.