Fours son lost in the war – “Western Union man refused to go – he did not want “to see Mrs. Borgstrom faint in grief again.” 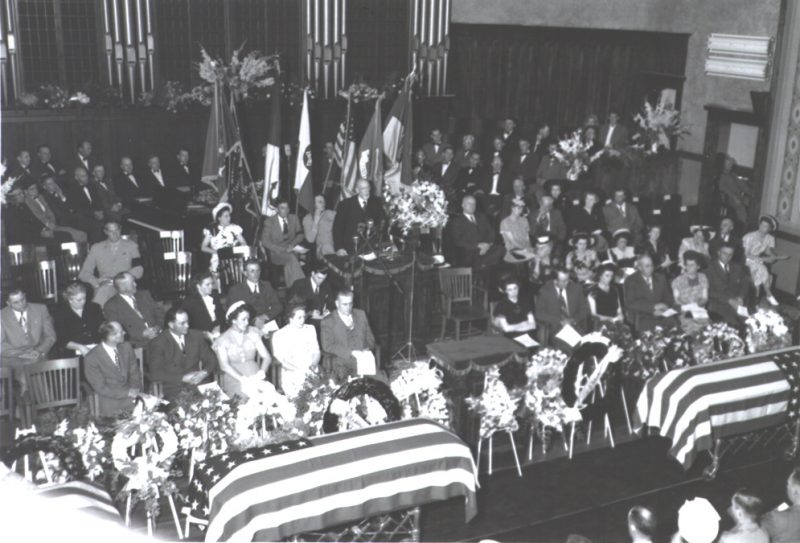 Five sons served between 1942 – 1944, but sadly only one would make it home. The four brothers were killed within six months. World War II took the lives of many Utahns, but no family in the state sacrificed more for the Allied cause than Alben and Gunda Borgstrom of Thatcher, Box Elder County. Four of the five sons they sent off to battle died within a six-month period during 1944. “Few families in American history have been called upon to make such a tremendous sacrifice for the cause of freedom and liberty,” one speaker noted at ceremonies honoring the Borgstrom brothers in 1946.

They sent five of their six sons to war-the sixth was too young. Only one came home alive.

Pfc. Clyde E. Borgstrom, 28, a member of the Marine Corps’ Aviation Engineers trained to drive a bulldozer, was killed March 17, 1944, on Guadalcanal, a southwestern Pacific Island secured only after fierce fighting, which he survived. He was clearing land when a tree fell and crushed him.

Pfc. Elmer Leroy Borgstrom, 30, the oldest and generally known as “Roy,” was a medic with the Army’s 91st Infantry Division. He was not allowed, by convention, to carry a gun. Nevertheless, while draping a wounded soldier over his shoulder on bloody Anzio beach in Italy, he was shot and killed on June 22, 1944.

“Clyde had joined first,” in 1940, Evelyn Borgstrom recalled, before the United States had entered the expanding world conflict. “Boyd, he went in to watch over Clyde. They were very close.” Roy was next. And, when they turned 18 in 1943, twins Rulon and Rolon enlisted on the same day. “They’d never been away from home in their whole lives,” she said.

Sgt. Rolon D. Borgstrom, a gunner with the Army Air Force’s 605th Bomber Crew, was mortally injured during an Allied raid over Germany on Aug. 8, 1944. He died of his wounds in England.

Pfc. Rulon J. Borgstrom had stormed into France with the infantry as part of the D-Day offensive. He was reported missing during an attack on LaDreff, France, on Aug. 25, 1944.None of the boys who were killed had married. Of their immediate family, only one sister, Wilma Hawkes of Brigham City, survives. As the keeper of the flame, she remembers them as they were. 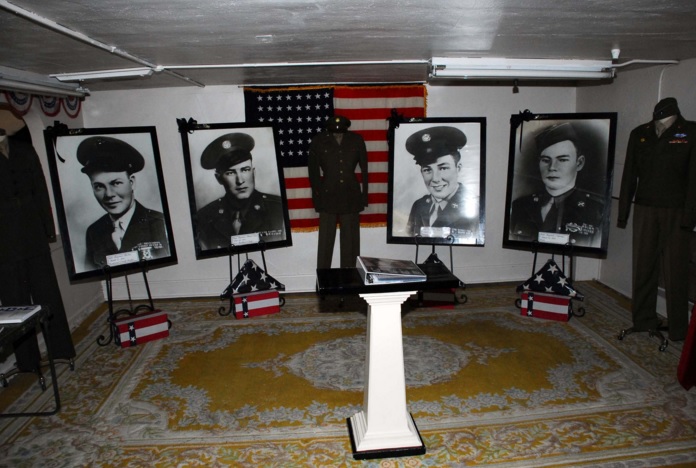 “We were just a happy family,” she said. “We were poor and didn’t have much.”The lively young men were, as their induction physicals proved, “as healthy as they could be” – and proud of the fact, their sister added. “They wanted to do their duty and were glad to go.”

Roy, however, had a premonition and told his sister Wilma, “If I go overseas I won’t come back.”

Wilma Hawkes, one of the Borgstrom sisters, recalled that the agent at the Western Union office refused to deliver the telegraph reporting Rulon’s death because he did not want “to see Mrs. Borgstrom faint in grief again.”

Alben and Gunda Borgstrom were the parents of ten children, seven of whom were boys. Six of the boys graduated from Bear River High School in Garland, Utah. Before the United States’ involvement in World War II, one of the sons died from a ruptured appendix. When the U.S. entered the war, five of the remaining brothers enlisted or were drafted into the military: Boyd, LeRoy Elmer, Clyde, Rolon, and Rulon.

When Rulon went missing, the Borgstrom family, with help from neighbors and the Utah congressional delegation, successfully petitioned for Boyd, the last Borgstrom son in the military, to be released from service. Shortly thereafter, he was transferred to the United States and discharged by special order of the Marine Corp’s commandant. Eldon, sometimes spelled Elton, who was not yet of enlistment age in 1944, was also exempted from military service.

It took almost four years after the four brothers’ deaths for their bodies to be returned to Utah by the American Graves Registration Service. A funeral service for the four brothers was then held in the LDS Church’s Garland Tabernacle in Garland, Utah on June 25, 1948. Clarence E. Smith, former principal of Bear River High School, Utah Governor Herbert B. Maw, LDS Church President George Albert Smith, and General Mark W. Clark spoke at the funeral. Rear Admiral John R. Redman, Major General LeRoy P. Hunt, and Brigadier General Ned Schramm were in attendance. The brothers were then buried side-by-side in the Riverview Cemetery in Tremonton, Utah.

The Memorial Service at the end of World War II honoring the four Borgstrom Brother’s from northern Utah. Each of these young men perished within six months of each other during the war. Photo courtesy of the LDS Church Historical Department. source

During the funeral service, the brothers were posthumously awarded three Bronze Star Medals, one Air Medal, and one Good Conduct Medal. According to Colonel Leonard R. Crews, “commanding officer of the Sixth Army escort detachment at Ogden,” the Borgstrom family was the “only four-star Gold Star family on record in World War II.”  (The Sullivan brothers—all of whom were killed in the same incident in World War II—were a five-star Gold Star family.)

The family petitioned the Marine Corps asking for a permanent discharge for their son, Boyd, who had been serving in the South Pacific and was sent to Camp LeJeune, N.C., after Rulon was confirmed dead.

“I feel in giving four sons we have given enough,” Gunda told the Salt Lake Telegram following the news of Rulon’s death.

Boyd was given an honorable discharge on Oct. 7, 1944, and arrived back at the family farm a week later.
“There’s not much I can say about my brothers being killed because nothing I can say will bring them back,” Boyd wrote to the Salt Lake Telegram. “I know my home certainly will not be the same without their noise and fun. You can imagine how my folks feel.”

Boyd would struggle with the loss of his brothers for the rest of his life.

“We used to sit in the evenings, and he would talk about his brothers and how hurt he was,” Boyd’s widow Melva Borgstrom, who died in 2007, told the Associated Press in 1998. “When you lose four brothers, what is there to come home to?”  According to Sheila Borgstrom, one of Melva and Boyd’s five children, her father suffered from extreme guilt and turned to drinking to mask those feelings.”People don’t know the devastation it can do,” even affecting succeeding generations, Sheila told the Associated Press. “His escape was to drink, and it was hurting the family, and we missed out on a lot because of it.”

Melva said Boyd was so depressed that after 17 years of marriage they divorced. However, 12 years later the two re-married and were happy until Boyd died of a heart attack just one year later at the age of 53.”He pulled us all together,” Sheila said. “It may have been only a year, but it was a lifetime for us.”

The loss of four of the Borgstrom brothers, along with the loss of all five Sullivan brothers, led to the official adoption of the Sole Survivor Policy in 1948.

In April 1959, the Army honored the Borgstrom brothers by naming a reserve training center in Ogden, Utah in their honor. In August 2001, a soldiers’ memorial was dedicated in Tremonton, Utah, which had the images and names of the brothers in a place of prominence.

« Criminals during the First World War – A collection of 35 vintage mugshots in North Shields, England
Mary Miles Minter-The Gorgeous Silent Era Star was involved in the scandal of the era; the murder of a film director. »