We’re not saying the creators of The Simpsons are time travelers, but honestly, at this point, we wouldn’t be surprised if they were. After all, how else would The Simpsons have accurately predicted so many historic events that have come to pass, decades before they occur?!

1. The discovery of the Higgs boson equation 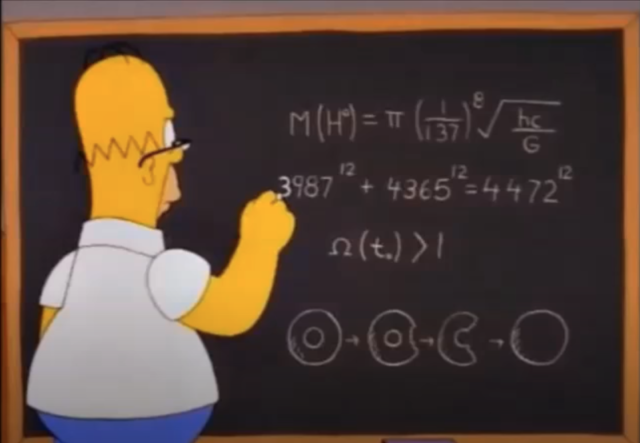 Homer Simpson working on an equation that is very close to the Higgs boson equation. (Photo Credit: Screenshot from ShantiUniverse via Youtube)

Scientists spent decades searching for the Higgs boson particle when they could have just been watching The Simpsons! In the 1998 episode “The Wizard of Evergreen Terrace,” Homer decides he is going to become an inventor. In the episode, we see Homer working on a complicated equation written on a blackboard.

The Higgs boson particle, which was first predicted in 1964 by Professor Peter Higgs, was eventually discovered in 2012. The Higgs boson equation helps explain how everything in the universe has mass.

This is pretty astonishing considering that Homer makes this prediction 14 years before the particle was actually discovered. The writers on The Simpsons might be time travelers, but many of them are also mathematicians. 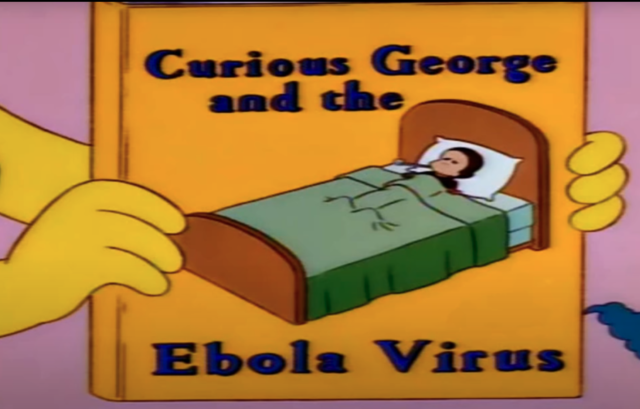 Marge Simpson holds a book in a 1997 episode of ‘The Simpsons’ which says “Curious George and the Ebola Virus.” (Photo Credit: Screenshot from Silent&Deadly via Youtube)

We’ll let you decide for yourself whether or not The Simpsons predicted the 2014 Ebola outbreak. In a 1997 episode titled “Lisa’s Sax,” Marge suggests that an ill Bart should read a book titled “Curious George and the Ebola Virus.”

Though the Ebola virus was first discovered in 1976, it was not particularly widespread in the 1990s when the Simpsons aired this episode. The Ebola epidemic in Western Africa in 2014 resulted in over 11,000 deaths in a period of three years.

3. A Rise in technology 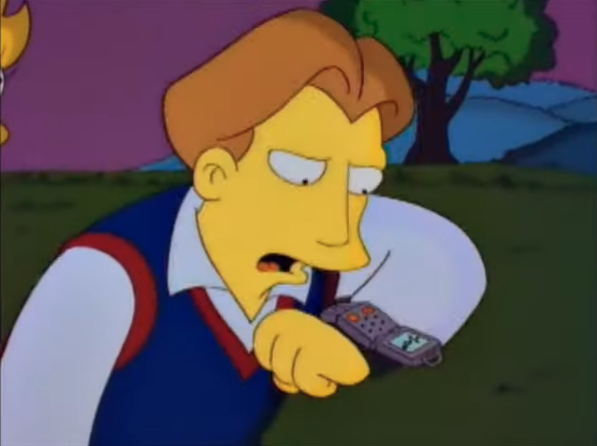 There have been a few instances in which The Simpsons predicted a rise in technology – specifically Apple watches and FaceTime. In 1995, The Simpsons introduced the idea of a watch that could be used as a phone. Nearly twenty years later, in 2015, Apple introduced the first Apple Watch which has the potential to double as a cell phone.

Similarly, in the 1995 episode “Lisa’s Wedding,” the writers seem to have predicted a technology essential to us today – video chat. In this episode, Lisa tells Marge that she getting married through a video call. We now have a variety of different platforms that allows us to easily talk face to face with others, including FaceTime, Zoom, Skype, and Google Meet. 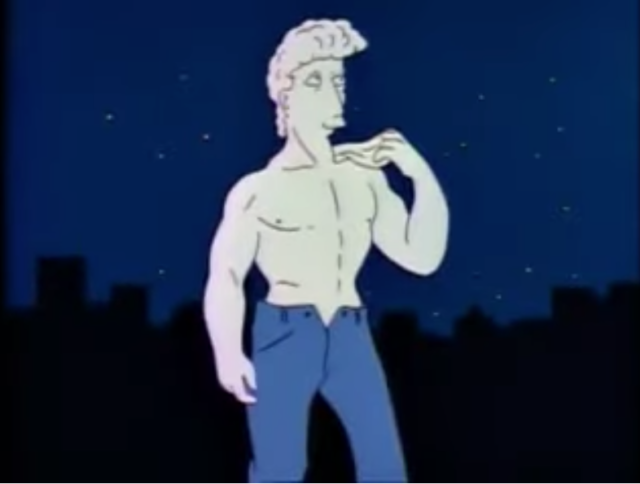 In a 1990 episode of The Simpsons, Marge led a censorship campaign which led to the Michelangelo statue in the Springfield museum being covered up.

In 2016, a copy of Michelangelo’s David in St. Petersburg, Russia faced backlash regarding its nakedness. Voters ended up opting to clothe the statue. Though some fans claim this is more evidence of time travel, people have been wanting to censor the David statue since it was first unveiled in 1504. Efforts to cover up Michelangelo’s David have existed for centuries, so a similar case was bound to happen after this 1990 episode of The Simpsons. 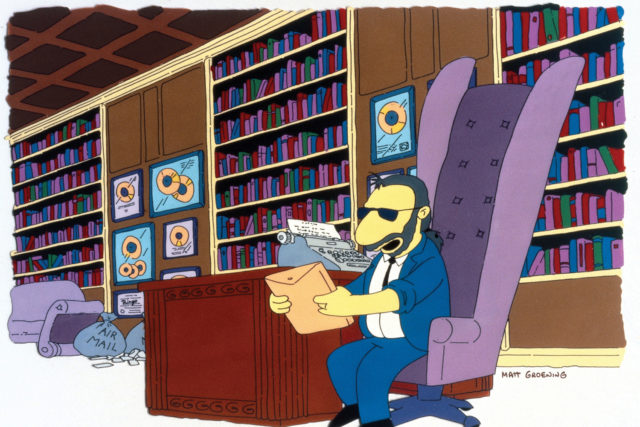 In 1991, Beatles member Ringo Starr voiced himself in a Simpsons episode titled “Brush with Greatness.” In this episode, Starr is answering fan mail that had been written to the Beatles decades ago, including a letter written by Marge.

They say life imitates art because in 2013 this scene seems to have come to pass. In 2013, Beatles member Paul McCartney replied to two women who sent a tape to him in 1963.

His message to the women read “Hi Linda and Barbara, thanks very much for your lovely tape. It finally got through, better late than never. Great to hear that you found each other after all these years. Keep enjoying the music, love Paul.”

In 1998, The Simpsons predicted in the episode “When You Wish Upon A Star” that Disney would buy 20th Century Fox. Technically, that was not the focal point of the episode, but fans still managed to catch this detail. In the episode, there is a sign in front of the Fox Studios which reads, “20th Century Fox, a division of Walt Disney Co.”

Of course, in 2017 – 19 years after this episode aired- Walt Disney Studios did in fact announce plans to buy the parent company of 20th Century Fox in a historic acquisition.

Interestingly, 20th Century Fox was The Simpsons‘ home studio. However, Rich Appel, who wrote this 1998 episode, noted that even then it was “poised for world dominance.” 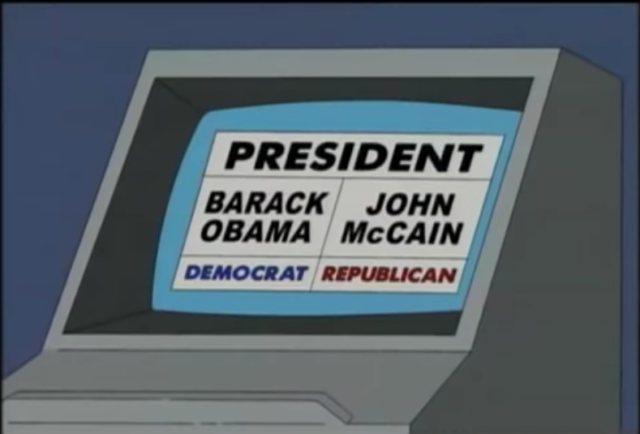 In a 2008 episode of The Simpsons, Homer is seen trying to vote for Barack Obama in the U.S. general election, but a faulty machine kept changing his vote to the Republican candidate, John McCain.

Four years later, this event actually came to pass. During the 2012 election, a Pennsylvania voting machine changed votes for Barack Obama to Republican candidate Mitt Romney. The footage from this voting machine shows the voter in a polling booth repeatedly attempting to cast his ballot for Obama, only to find that the machine ticket had Romney’s name. 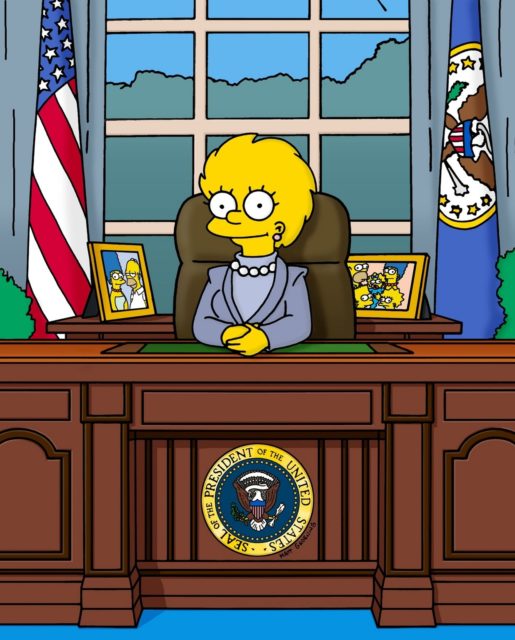 This prediction is extremely accurate, but that has to just be a coincidence, right? Lisa Simpson assumes the presidency in an episode from 2000, titled “Bart to the Future.” In this episode, Lisa famously says, “As you know, we’ve inherited quite a budget crunch from President Trump.” 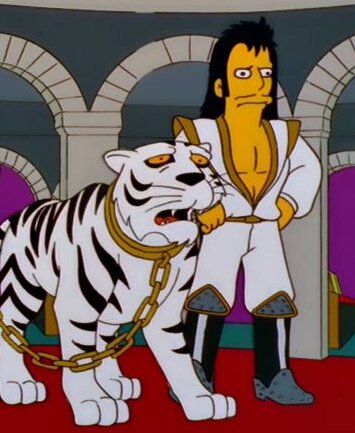 In 1993, The Simpsons parodied entertainers Siegfried & Roy in their episode titled “$pringfield.” During this episode, the magicians, named Gunter and Ernst, are attacked by a white tiger while performing.

More from us: ‘The Simpsons’ reenactments of 12 iconic and historic photos

In 2003, a decade after The Simpsons episode aired, the real Siegfried Fischbacher and Roy Horn were attacked by a white tiger. During a magic show at the Mirage Casino and Hotel in Los Vegas, a seven-year-old white tiger attacked Horn. The tiger bit into Horn’s neck, dragging him offstage. Luckily, Horn survived but sustained major injuries from the attack. This tiger attack prompted the Mirage to close Siegfried & Roy’s magic show.

« Essential Blarney About Some Beloved St. Patrick’s Day Traditions
A Badger Uncovered One of the Largest Collections of Roman Coins Ever Found in Spain »