The Simpsons reenactments of 12 iconic and historic photos

There is one episode in South Park titled “Simpsons Already Did It”, and the episode depicts how Simpsons had  mocked and covered about everything there is in pop culture that is worth covering.

So, there is no need for more introduction, they’ve been on the air for almost 30 years, they are awesome and  below you can check how they’ve turned some iconic historic photos into colorful, funny parody. 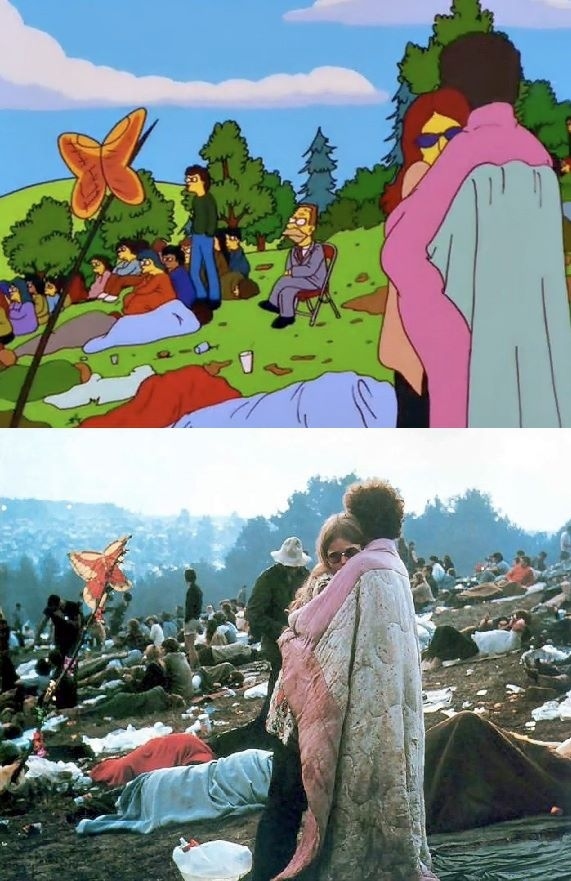 The iconic photo of the embracing couple Nick and Bobbi Ercoline  at Woodstock appeared on the soundtrack album that immortalized them at the legendary festival.

Simpsons recreated the iconic couple in a bit different perspective in the sixth episode of The Simpsons‘ tenth season,  where Homer becomes a hippie after a revelation about his middle name.

Simpsons mocked the iconic photo of  President Truman holding the infamous issue of the Chicago Tribune in the nineteenth episode of The Simpsons’ second season when Bart decides to run for class president, and becomes the overwhelming favorite.

This is a reference to the famous picture of former President Harry Truman holding up a copy of a prematurely printed edition of the Chicago Tribune that proclaimed “Dewey Defeats Truman”, taken the day after his close victory over Thomas E. Dewey in the 1948 United States presidential election.

Bart imitates the iconic photo of Betty Grable  in “Lisa the Beauty Queen” the fourth episode of The Simpsons‘ fourth season when Homer enters Lisa into a beauty pageant to boost her confidence.

Bart  teaches her how to walk properly in high heels.

4.Construction of the Empire State Building 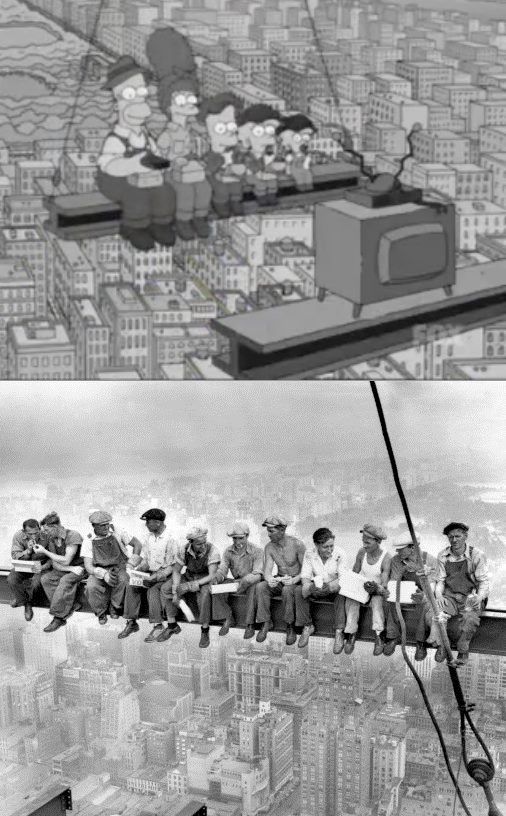 The iconic photo of construction workers having lunch atop  the Empire State Building in 1931 shows up in a bit different version in the opening credits of The Simpson’s “The Dad Who Knew too Little” Season 14 Episode Season 8. 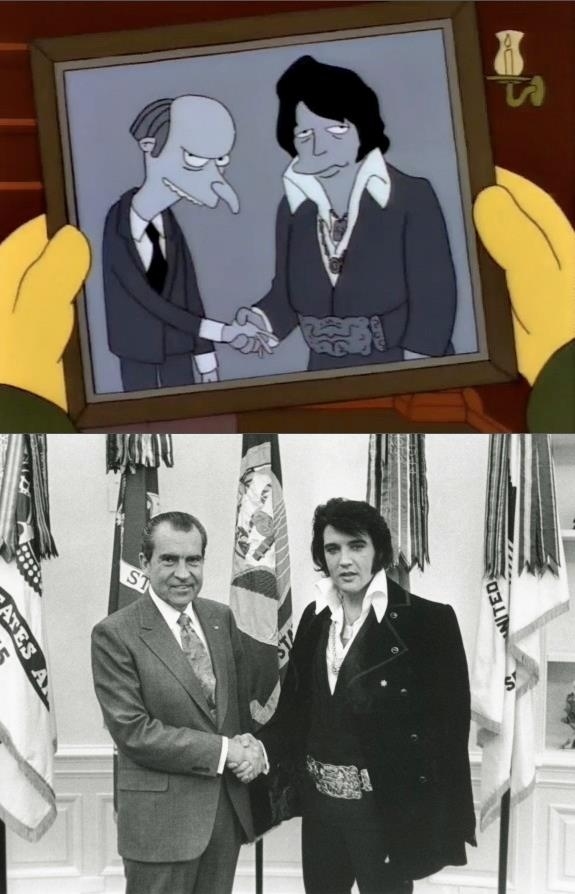 “Marge Gets a Job” Season 4 Episode 7 – Photo of Burns and Elvis given to Smithers “I’m on your side, ” Elvis told Nixon. 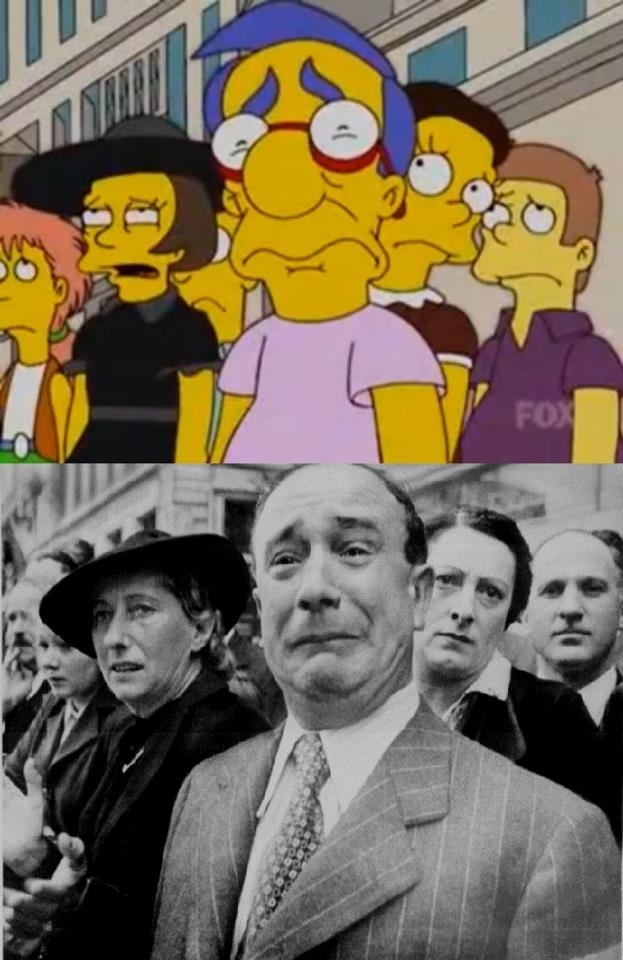 “Marge vs. Singles, Seniors, Childless Couples and Teens and Gays” Season 15 Episode 8 – Itchy & Scratchy gets taken off the air A Frenchman cries as Nazis occupy France during World War II. 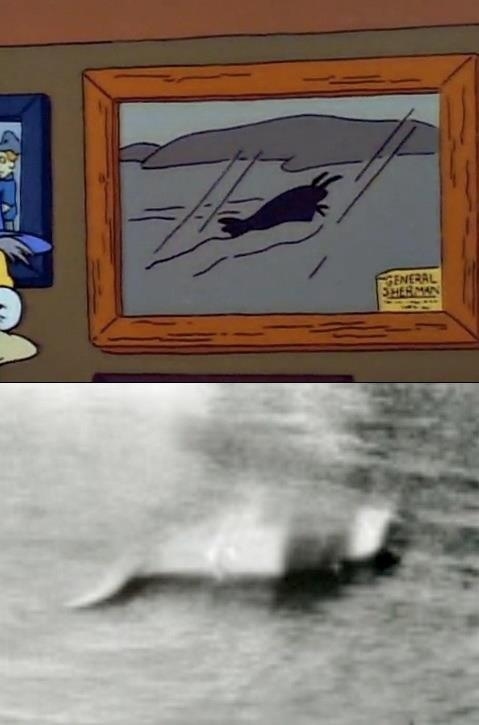 The picture of General Sherman at the bait shop is a reference to the famous hoax picture of the Loch Ness Monster.

The photo appears in The War of the Simpsons”  the twentieth episode of The Simpsons‘ second season. 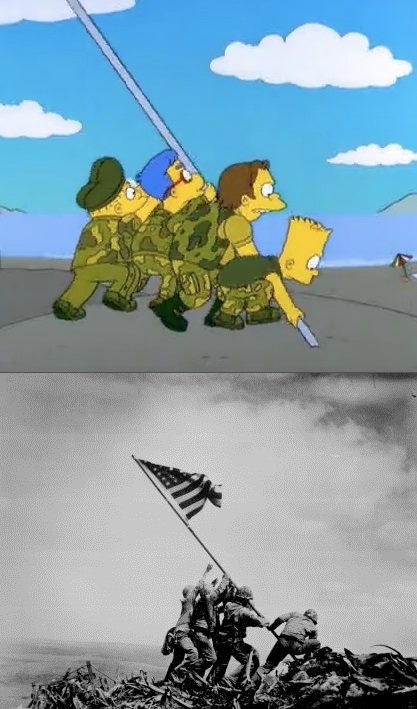 9. Oh, the humanity or D’OH the Humanity- Th Hindenburg Disaster 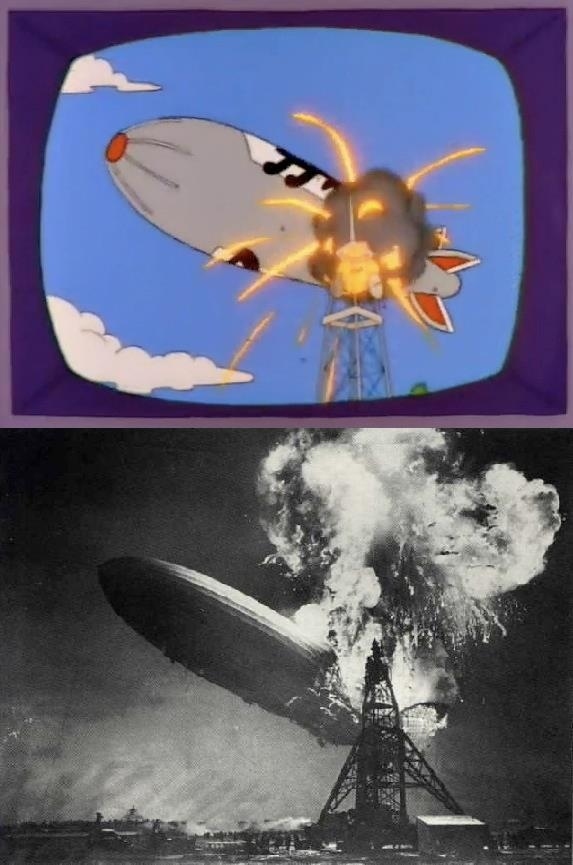 This is also from the “Lisa The Beauty Queen Episode.”  the parody of the Hindenburg disaster, when the Duff Blimp crashes into the radio tower, to which Kent Brockman quotes “Oh, the humanity! 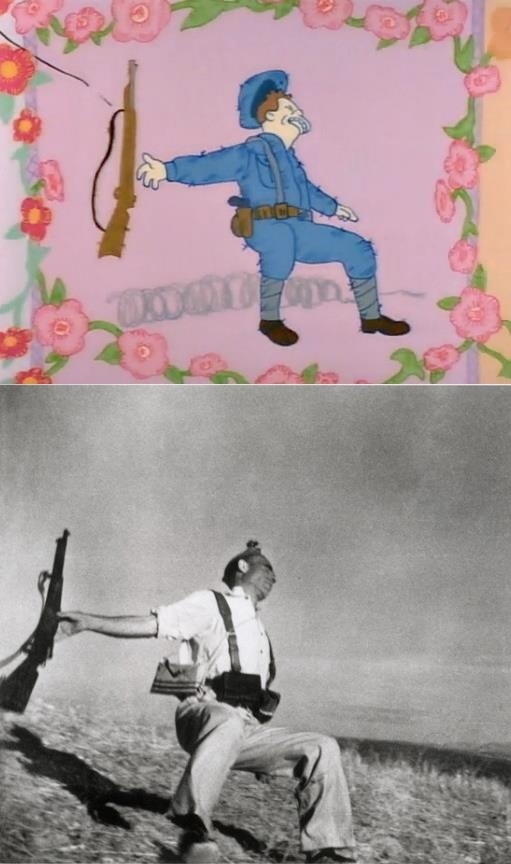 11.Swearing in of Lyndon Johnson right after the assassination of JFK. 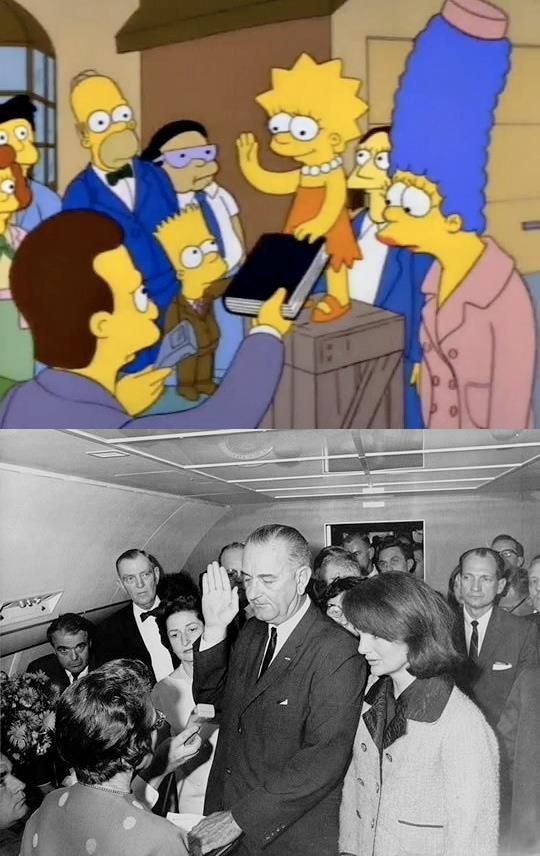 The swearing in of Lyndon Johnson right after the assassination of JFK.

12.The iconic photo of fleeing Americans during the fall of Saigon.

The iconic photo of fleeing Americans during the fall of Saigon is recreated in “Bart vs. Australia” Season 6 Episode 16.