Kirk Douglas, one of the greatest actors from the Golden Age of Hollywood, died in 2020 at the age of 103. After decades of fame, including 75 movie credits, Douglas accumulated a net worth of approximately $61 million. When he passed, his will left nothing from his fortune to his children, so where did all that money go? We’ll find out and learn more about his long and distinguished life along the way. 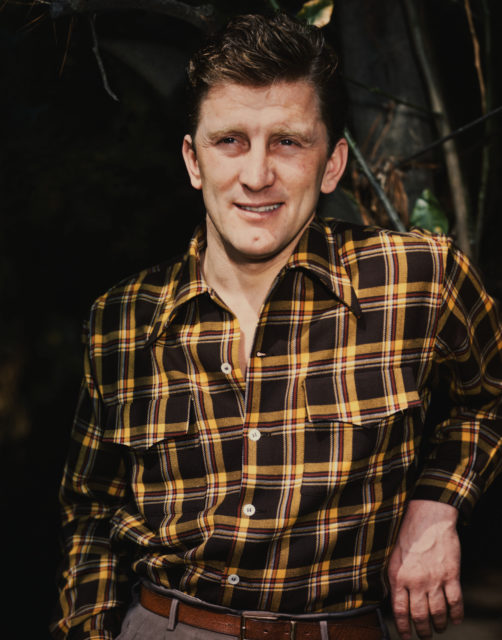 Born Issur Danielovitch Demsky on December 19, 1916, Kirk Douglas grew up in an impoverished, Russian-Jewish immigrant family in Amsterdam, New York. Despite growing up in the ghetto, Douglas excelled academically and athletically and wrestled professionally to help fund his university career. He was able to secure a scholarship to the American Academy of Dramatic Arts which was both his way out of poverty and his way into acting. 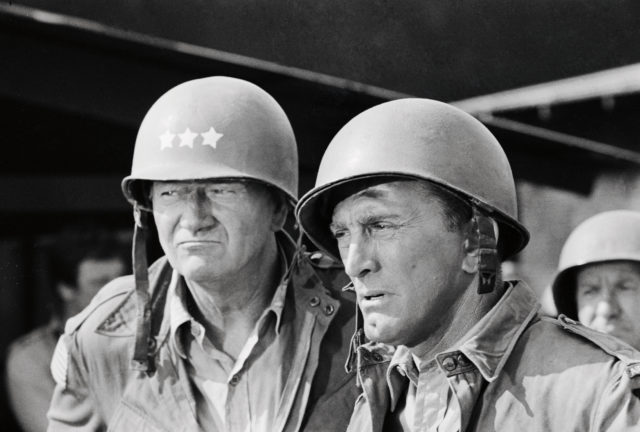 Douglas had a short stint on Broadway, performing in Spring Again, until his acting career was interrupted by the inclusion of the US in WWII in 1941. Not long after the Japanese raid on Pearl Harbor, he joined the US Navy. He once said in an interview, “I felt a wave of patriotism and a wave of Jewishness about what was happening in Europe with Hitler.”

Douglas’ military career wasn’t particularly distinguished, but he did suffer abdominal wounds after a shipmate mistakenly launched a live ashcan while patrolling the Pacific Theater. It exploded under the water, launched the USS PC-1139 into the air, and dangerously tossed the crew around. Because of his injuries, he was sent to San Diego’s Balboa Hospital, where they discovered he had chronic amoebic dysentery.

His acting career really takes off 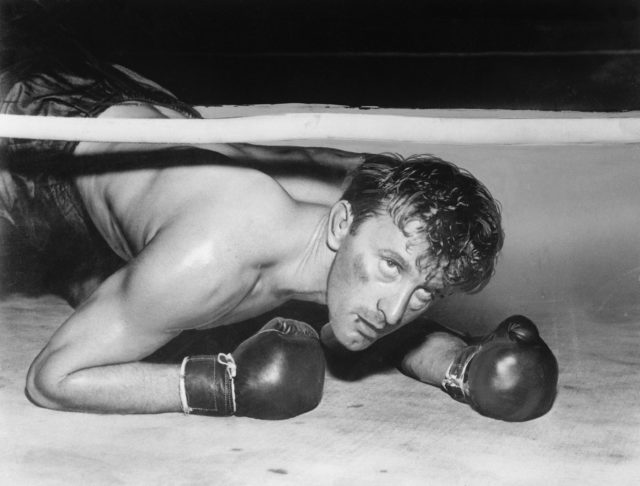 Kirk Douglas is shown in a scene from the movie Champion, a movie directed by Mark Robson. The boxer character “Midge Kelly rises to fame…mainly due to stepping on other people.” (Photo Credit: Bettmann / Getty Images)

After returning home from his service in WWII, Douglas went back into acting. He scored his first Hollywood film in 1946, starring as Walter O’Neil in The Strange Love of Martha Ivers. Although this was his first time on film, his real breakthrough performance would come as Midge Kelly, the optimistic and stubborn boxer in the film Champion (1949). His portrayal of Midge earned him his first Academy Award.

Douglas continued to star in films in the following years, and in 1955 he opened his own production company called Bryna Productions. This company would produce two of the most pivotal film roles in his career – as Colonel Dax in Paths of Glory (1957), and as Spartacus in Spartacus (1960). Douglas’ knack for acting kept him on the big screen well into his old age. 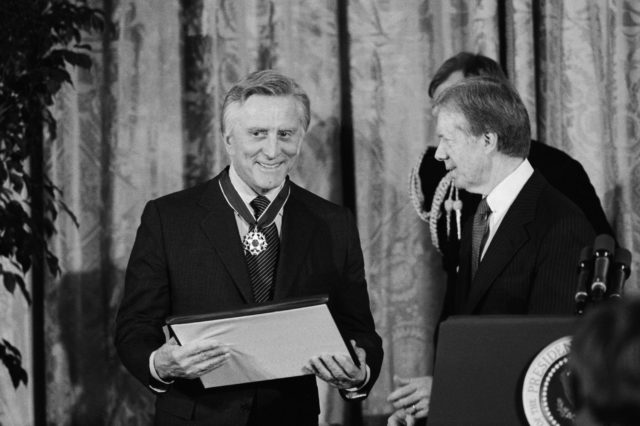 A lesser-known fact about Douglas was his commitment to philanthropic work. Once he found fame, the hardships of his childhood inspired him to help others, so that they may have a better life. Throughout his career, Douglas made countless charitable donations. Most notably, he served as a Goodwill Ambassador for the US State Department since 1963 which won him the highest civilian award, the Presidential Medal of Freedom, presented to him by President Jimmy Carter in 1981. 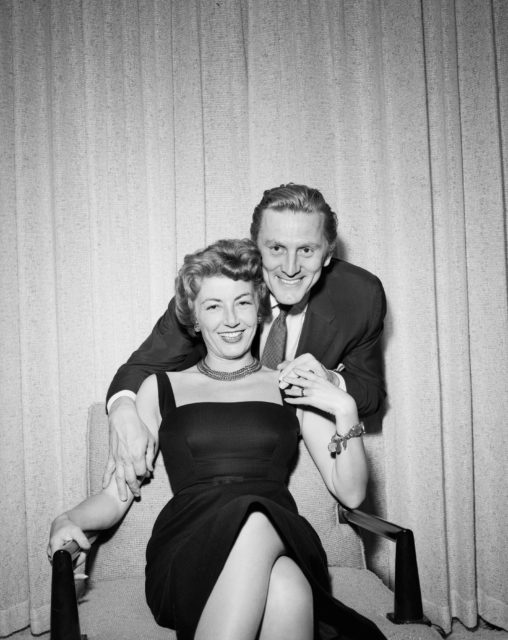 In 1964, he and his second wife, Anne, founded the Douglas Foundation. As per their website, “The Douglas Foundation’s principal goal is to help those who cannot otherwise help themselves.  Its primary focus is improving education and health, fostering well-being, and most importantly developing new opportunities for the children who hold our future in their hands.”

Additionally, the Douglas Foundation supports medical research, supplies necessary equipment, and funds programs within the health system with the intention to improve the quality of care in local communities. 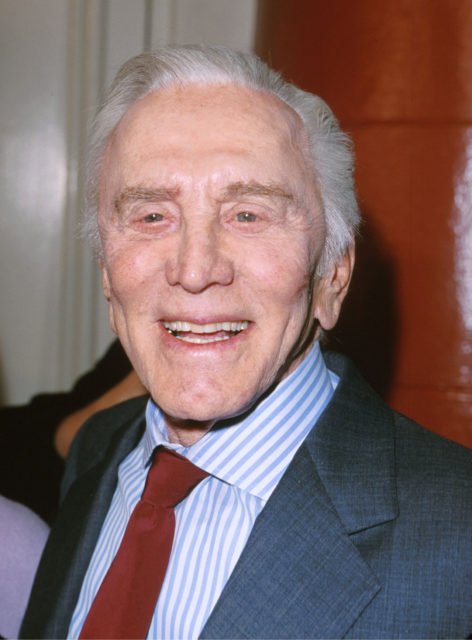 By the time he was 103 years old, Douglas had amassed a net worth of $61 million. His charitable demeanor did not end with his death in February 2020, as he had $50 million of his $61 million donated to his own organization, the Douglas Foundation, after he passed away. Over the years, the Douglas Foundation has become “one of the entertainment industry’s largest and oldest private philanthropic institutions.”

Douglas performed innumerable good deeds over his life, and his donation after death continued his legacy as a humanitarian.

The money was split between a number of charitable causes

The Douglas Foundation services many charitable organizations, some of which received donations from Douglas’ fortune. These included the Sinai Temple in Los Angeles, which is home to the Anne Douglas Childhood Center; the Children’s Hospital Los Angeles; Culver City’s Kirk Douglas Theatre; and Douglas’ alma mater, St. Lawrence University, which will put some of the money toward its scholarship program.

Anne continued the charitable work after his death 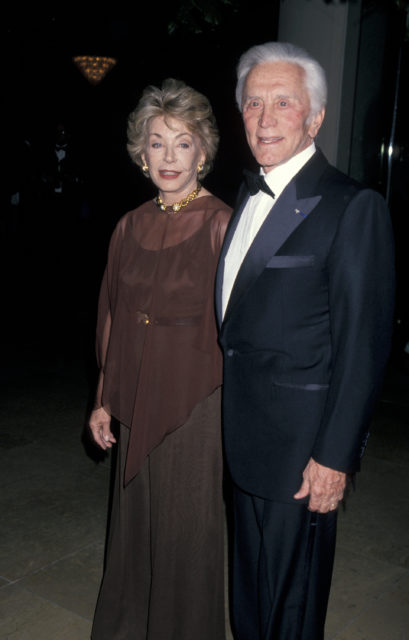 His second wife, Anne, also lived a long life. She shared her husband’s desire to give back to the community and became a prolific philanthropist. She was one of the original founders of the Cedars-Sinai Research for Women’s Cancers and founded The Anne Douglas Center for Women, both of which received part of Douglas’ donation. 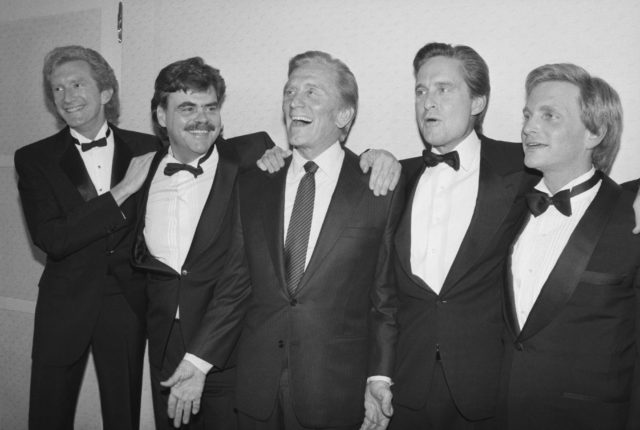 Kirk Douglas, center, poses with his four sons during a gala evening at the Majestic Theatre in Manhattan where he was honored by the American Academy of Dramatic Arts. (Photo Credit: Bettmann / Getty Images)

Douglas had four kids, three of which his inheritance did not include. He had two children, Michael and Joel, with his first wife, Diana Dill. After remarrying, he had two children, Peter and Eric, with his second wife, Anne. All of his children followed in his footsteps and took up careers in the entertainment industry. His eldest, Michael, is world-famous and, like his father, is considered one of the greatest actors of his generation.

His second child, Joel, prefers to remain behind the camera and became a film producer. He has worked on many classic films like One Who Flew Over the Cuckoos Nest (1975), and worked alongside his older brother, Michael, on numerous occasions. Peter also prefers to be behind the camera, as he himself became an award-winning producer for his work on the TV movie Inherit the Wind (1988).

Douglas’ youngest child, Eric, took a different route in the entertainment business, becoming a stand-up comedian. He had a checkered life, getting into trouble with the law multiple times, and ultimately died of an accidental overdose in 2004. 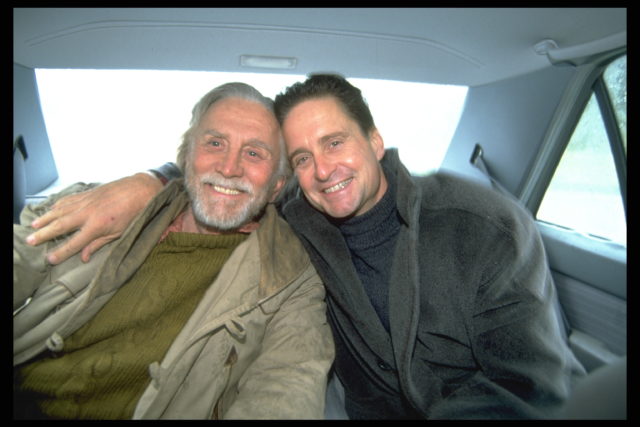 Michael Douglas visits his father, who was in the Pyrenees for the filming of Xavier Castano’s Veraz. (Photo Credit: Micheline Pelletier / Sygma / Getty Images)

Despite horror stories of inheritance issues ending in bitter family rivalries, the Douglas family was totally okay with their father’s wishes. It’s unclear what happened to the remaining $11 million, but none of his children argued about the $50 million donated to the Douglas Foundation. Michael Douglas actually made a very touching post about his father’s passing that showed no sign of contempt toward the elder Douglas’ final wishes.

Daughter-in-law Catherine Zeta-Jones also shared a loving post about her late father-in-law, further confirming that no one felt cheated by Douglas’ will and that he can rest easy knowing everyone had a deep love and appreciation for him and his charitable endeavors.

Of all of Douglas’ children, Michael will surely be fine, as he himself has accumulated a net worth eclipsing that of his father’s – a whopping $350 million.