First Ladies are true superheroes – they have historically helped their husbands run the country, all while being hailed for their keen fashion sense. But were these iconic women stylish before receiving the title “First Lady”? Let’s take a look back at some of the most iconic wedding dresses of America’s First Ladies. 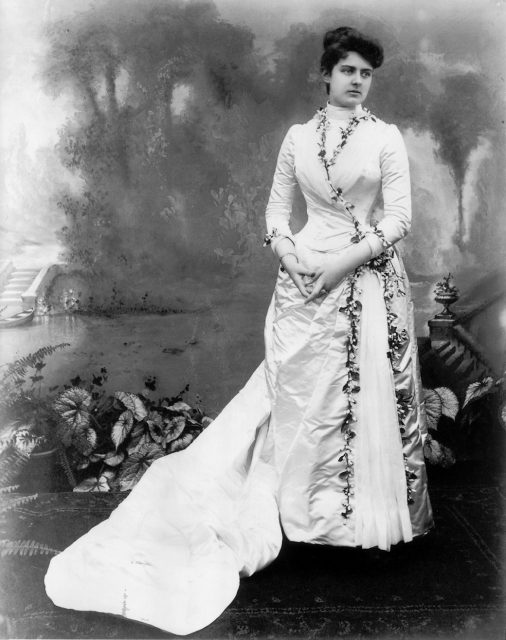 Frances Folsom and Grover Cleveland‘s wedding in 1886 was the only time that a sitting president got married during his time in the White House. Interestingly (and strangely) enough, Cleveland (who was 49 when he got married)  had been Folsom’s (who was 21 when she got married) legal guardian for over a decade, after her father had passed away in an accident when she was 11.

Shortly after the wedding, Folsom had her gown altered so she could reuse it at public receptions. The long train attached to her dress was removed and the originally white gown was dyed a rose-colored pink. 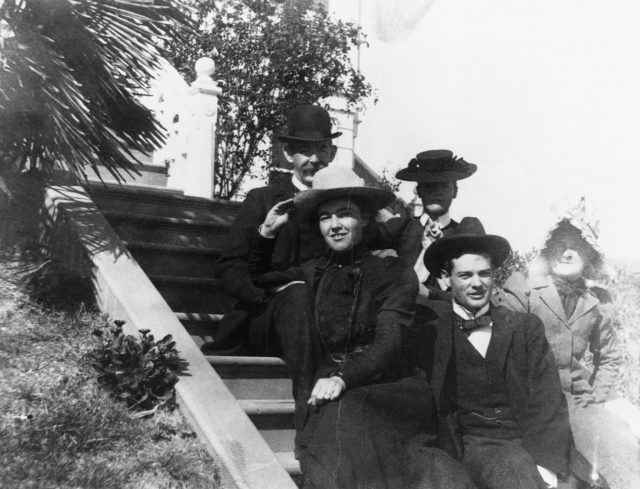 Lou Hoover (nee Henry) was one of the most interesting First Ladies of all time. She enjoyed the outdoors, especially camping with her dad, and was a solid taxidermist. She graduated with a Bachelor of Arts in Geology from Stanford University, and she was fluent in Chinese – making her the only First Lady to speak an Asian language.

When Herbert Hoover and Lou Henry were married in February 1899, she opted for a dark-colored gown instead of a traditional white dress. The couple was married in a small ceremony at Lou’s parents’ home in Monterey, California. Initially, they were going to be married by a Methodist minister named Dr. William Thoburn, but he died shortly before the wedding date. Instead, the couple was married by a Catholic priest named Father Ramon Mestres. The validity of the marriage was questioned because Hoover was a Quaker and Henry was an Episcopalian. 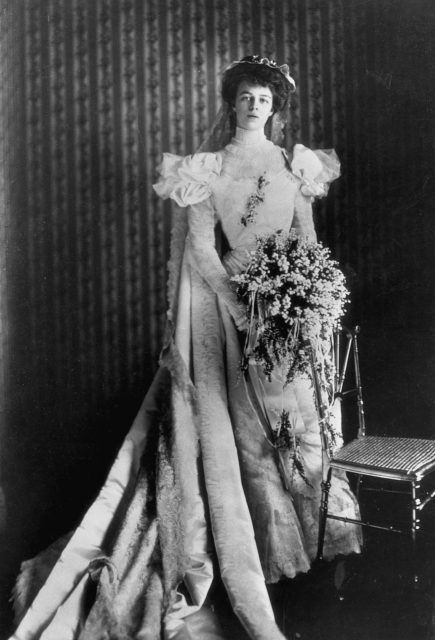 Eleanor Roosevelt and Franklin D. Roosevelt married on March 17, 1905, when she was 19 and he was 22 years old. Her dress was very elegant looking, but according to her own memoir “This Is My Story,” it was very heavy. The gown was made from stiff satin with “shined tulle in the neck and long sleeves. My grandmother Hall’s rose point Brussels lace covered the dress, and the veil of the same lace fell from my head over my long train,” she wrote. 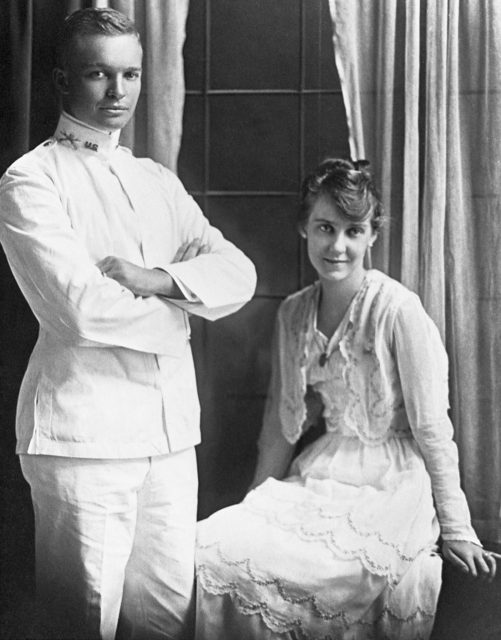 Like Eleanor Roosevelt, Mamie Doud got married at the ripe old age of 19 years old. She wore a beaded gown with scalloped ruffles. Interestingly enough, Mamie Eisenhower would later go on to establish a particular shade of pale pink that became known as “Mamie pink,” which played a major role in associating pink with femininity in the 1950s. 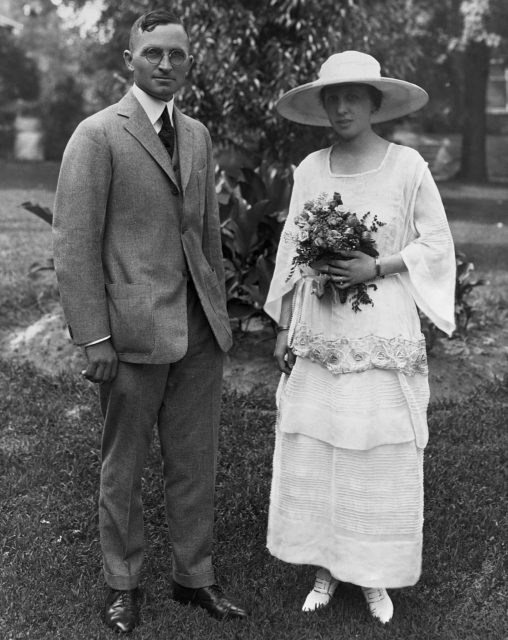 Although Elizabeth Virginia “Bess” Wallace was often described as a tomboy when she was a child, she grew up to have an affinity for fashion – especially hats. When Wallace married Harry Truman on June 28, 1919, in Independence, Missouri, she made sure to include her favorite accessory on her big day.

Interestingly enough, Truman proposed to Wallace twice. The first time he asked her to marry him in 1911, she turned him down. After Truman returned home from the First World War, Bess Wallace agreed to marry him. 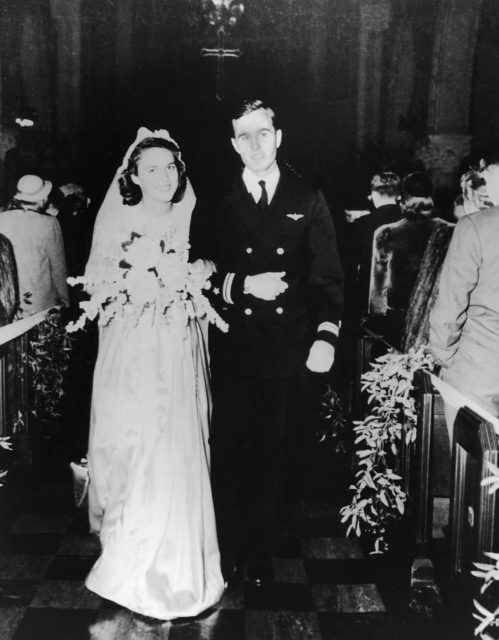 Barbara Pierce and George H.W. Bush were married in 1945 in Rye, New York, and were together for 73 years – making them the first couple with the second-longest marriage, after the Carters. She wore a stunning satin, high-necked wedding dress and borrowed the wedding veil that her husband’s mother had worn on her own wedding day. 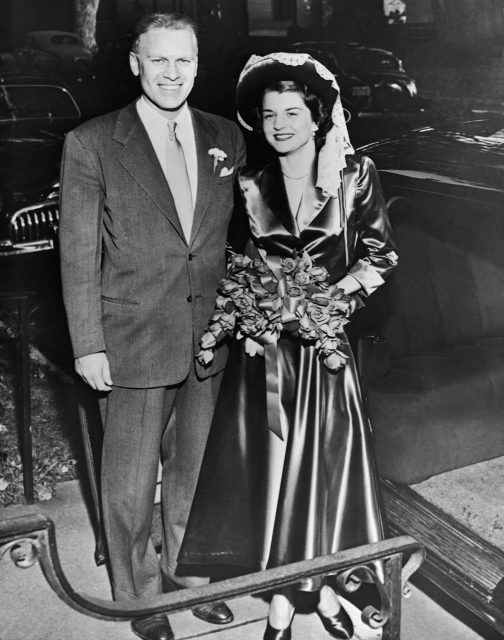 Unlike most brides, Betty Bloomer opted to not wear the color white on her wedding day, choosing instead to wear a stunning sapphire blue satin dress. She also wore a matching hat made with a piece of lace from a parasol belonging to Gerald Ford’s grandmother. Interestingly, Gerald Ford decided to go camping right before the ceremony, which resulted in him having muddy shoes. Gerald Ford recalled, “my mother was furious, but Betty pretended not to notice.”

Although Ford initially proposed to Bloomer in February 1948, the couple decided to push their wedding until the fall because Ford was planning his first congressional campaign. He wasn’t sure how voters might feel about him marrying a divorced former dancer while he was running for Congress. 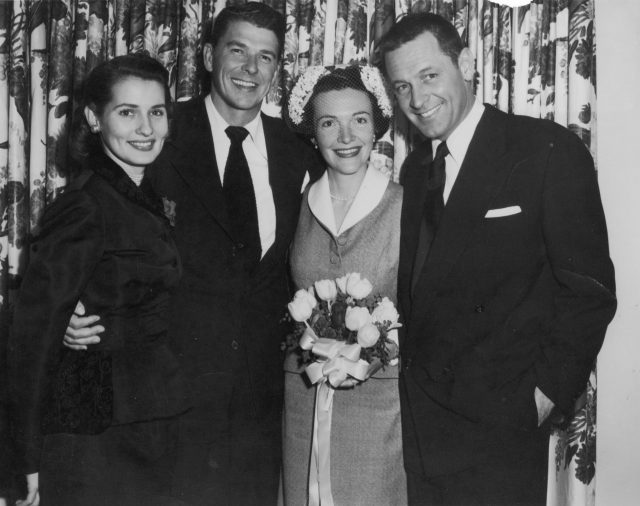 Ronald and Nancy Reagan on their wedding day with William Holden and his wife Brenda Marshall. (Photo Credit: Wikimedia Commons)

Like Ronald Reagan, Nancy Davis was an actress in Hollywood before she assumed duties as the First Lady. The couple met in 1949 when Reagan was serving as president of the Screen Actors Guild (SAG) and Davis was trying to remove her name from the McCarthy-era Hollywood blacklist. (The list referred to another actress with the same name, but it was preventing Davis from finding work.) She contacted Ronald Reagan to see if he, as the SAG president, could help clear up this mistake.

Although Reagan was hesitant to marry again after his divorce from actress Jane Wyman, the two began dating and ultimately fell in love. On March 4, 1952, the couple married in a low-key ceremony. When the two married in 1952, Nancy was secretly pregnant with the couple’s first child, Patricia Ann, and her simple dress was used to hide her growing belly. 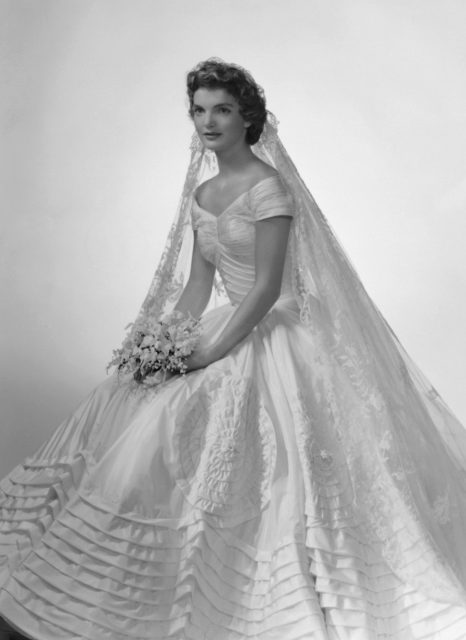 Before her wedding to John F. Kennedy, Jacqueline Bouvier asked fashion designer Ann Lowe to create her wedding dress. However, ten days before the wedding, a water pipe in Lowe’s Madison Avenue studio broke, which ultimately ruined the dress. It had taken two months to finish and included more than 50 yards of silk taffeta.

Luckily for Bouvier, Lowe’s team of seamstresses worked tirelessly to remake the wedding gown. However, this ordeal resulted in a loss of $2,200 (about $21,000 today) for the designer, and to make matters worse, only The Washington Post’s Nina Hyde shared Ann Lowe’s name when discussing one of the most iconic wedding dresses of all time after the wedding. Today, many of Lowe’s designs are on display at museums across the country. 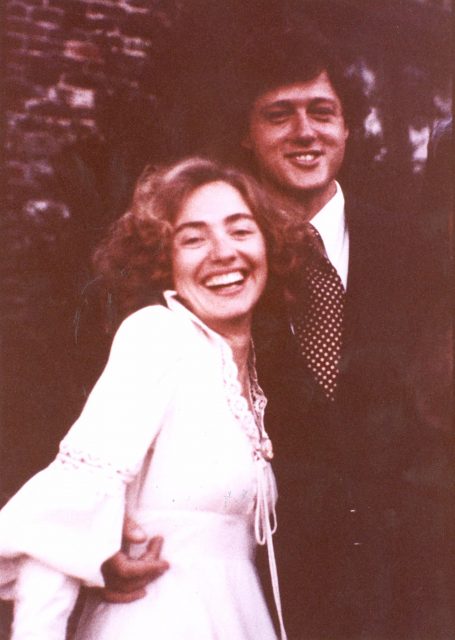 A wedding dress was perhaps not at the forefront of Hillary Rodham’s mind when she agreed to marry Bill Clinton. Clinton asked her to marry him three times before she finally said yes!

The couple was married on October 11, 1975, at home in Fayetteville, Arkansas but Hillary was so nonchalant about the ordeal that she didn’t even have a wedding dress until the night before her wedding. When her mother found out that her daughter had no dress, she ran over to a Dillard’s in the Fayetteville Mall and bought a $53 Jessica McClintock Victorian lace gown – the first dress she saw! 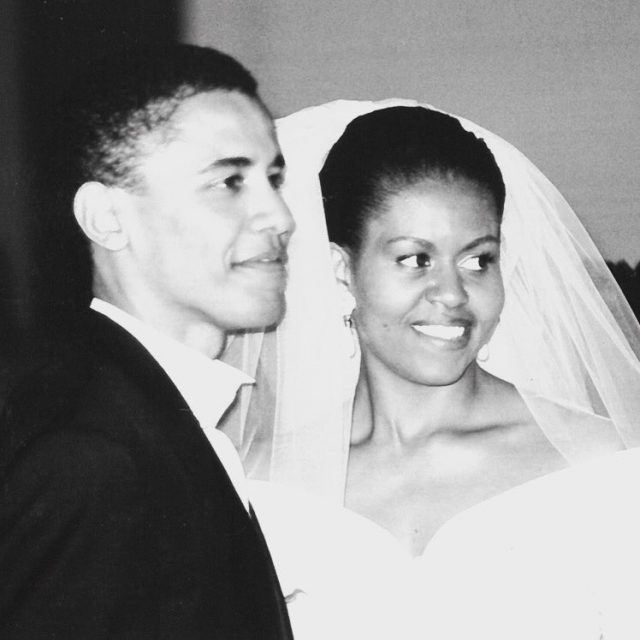 Michelle Robinson and Barack Obama were married on October 3, 1992, at Trinity Church of Christ in Chicago. For the event, Michelle wore a stunning off-the-shoulder long-sleeved gown, complete with a goofy veil and drop-pearl earrings.