Stone Age Kitchen Found at the Bottom of a Lake, complete with 9,000-yr-old Stove

University of Helsinki researchers studying a group of lakes in Finland say they’ve found a Stone Age settlement in Lake Kuolimojarvi that gives clues to how humans lived in the area in the Mesolithic and Early Neolithic Stone Age, ranging from 6,000 to 10,000 years ago.

Examining objects found at the bottom of the lake, the researchers zeroed in on implements used to shape stone tools in an underwater hearth.

“The hearth included remnants of charcoal, as well as burnt sand and stone, which leads us to believe that early humans were active in this area many years ago,” said University of Helsinki postdoctoral archaeology researcher Satu Koivisto, who led the expedition, in an interview with YLE Uutiset.

“Koivisto said a stove structure found about a meter below the water’s surface cannot be from any other time than 9,000 to 8,000 years ago–before the water level rose,” the article continued. Koivistio also said, “A lot of our inland lakes such as Vanajevesi, Pielinen, and Lake Oulu have experienced similar surface variation. That is why there are great expanses of largely untapped underwater archaeological resources in Finnish lakes where very old organic material may have survived for thousands of years.”

When the water levels rose, areas that existed on dry land were buried at the bottom of lakes.

Underwater archaeologists took soil samples of the burned layer around the hearth and are now studying it.

These findings may change the timeline of when early humans lived in Finland.

The researchers say they believe there could have been human habitation in this area for thousands of years before the time of the lake settlement, as is shown by traces dated to more than 10,000 years old discovered at Kuurmanpohja in Joutseno, farther to the south.

The hearth and other materials at Lake Kuolimojarvi indicate a submerged Stone Age settlement site, the first of its kind in Finland. The nearest similar sites have been found in northwestern Russia and southern Scandinavia.

Finland is a place of fascinating discoveries, with hundreds of unexplored caves believed to hold many secrets. One that was explored to great excitement is called Varggrottan, which means the Wolf Cave in English. 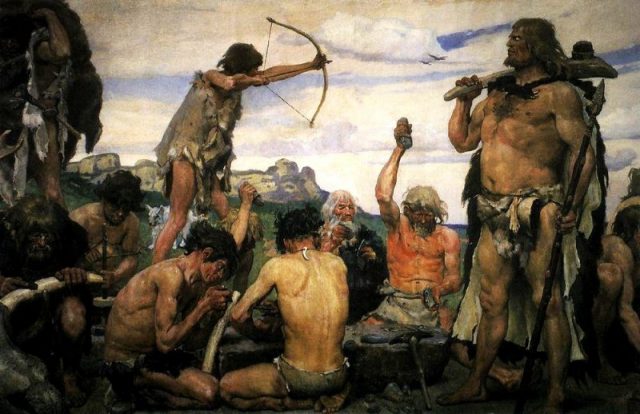 Imaginative depiction of the Stone Age, by Viktor Vasnetsov.

When archaeologists bore down on it, they found artifacts that suggest this was home to Neanderthals who lived tens of thousands of years ago.

Located in Pyhävuori mountain in Kristinestad, near the Karijoki municipality in Finland, the Varggrottan, described as a crack in the mountain, was thought to be inhabited sometime between 75,000 and 130,000 years ago, before the existence of modern man in Europe. As many as 200 artifacts, and about 600 pieces of strike waste, scrapers and bolt stone, and heated stones from an open fire, have been found there. 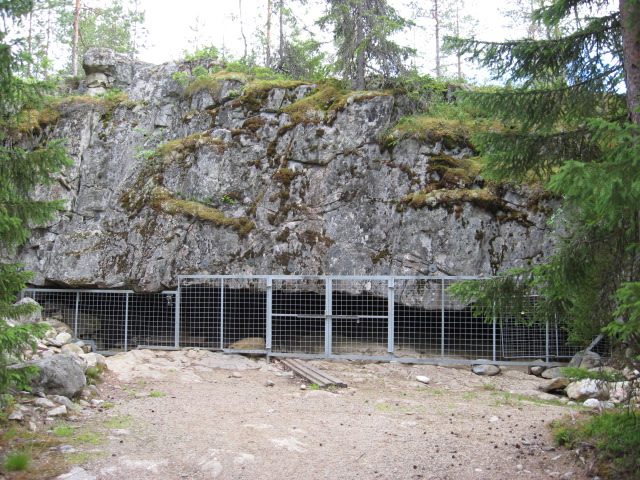 The objects were made of various materials, including siltstone, quartz, quartzite, volcanic rock, jasper and sandstone; as siltstone and quartzite don’t occur naturally in the area, it means some must have come from elsewhere. Mammal bones and material believed to be their prey were also found during the excavations from 1997 to 2006.

However, some researchers dispute that the occupants of the cave were Neanderthal. 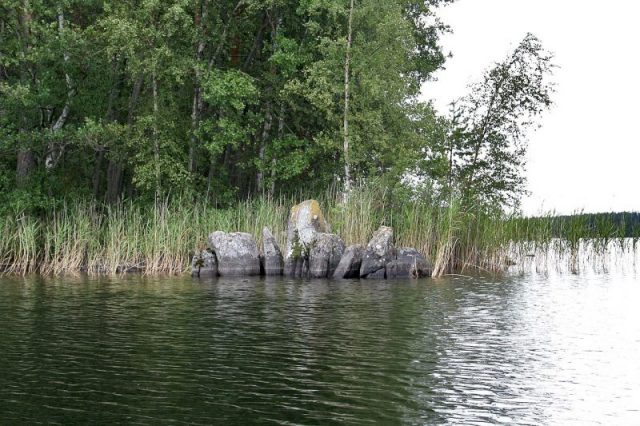 The discovery in Lake Kuolimojarvi extends significantly the assumed history of humans in Finland. Up to now the first signs of human life were believed to date to the 8th century BC. The remains of a fishing net had been dated to 7300 BC.

On the question of the origin of the Finn people, in the 1960s, researchers said that one-quarter of the Finns’ genetic stock was Siberian and three-quarters European. The latest research on DNA strengthens the view that the Finns are genetically mostly an Indoeuropean population.

The Finns are believed to be related to the Balts, Germanic people, and the Baltic Finns. The language seems to come from the east and belongs to the Uralic family, although it contains some words from Indoeuropean languages such as Baltic, Germanic, and Russian.

« Thomas Edison, Nikola Tesla and the Sad Case of ‘Topsy’ the Circus Elephant
Columbo – Peter Falk’s Artificial Eye and Rejection from the CIA »