On November 25, 1963, an estimated 180 million people watched President John F. Kennedy’s funeral. Although the funeral was watched by millions worldwide, many people didn’t realize that Jackie Kennedy added many small, personal details to the service. Let’s take a look at the intimate details added to President Kennedy’s funeral service that honored his life and legacy.

JFK’s body was carried in a special horse-drawn cart

A caisson carriage was used to transport President Kennedy’s body from the Capitol Rotunda to his funerary service at St. Matthew’s Cathedral and then to Arlington National Cemetery, where the president was interred. A caisson carriage was originally designed to carry artillery ammunition, and, when necessary, to transport the wounded or dead from the battlefield. Today, caissons are used primarily during the funerary procession for individuals who receive full military funeral honors – something that every US president is entitled to. 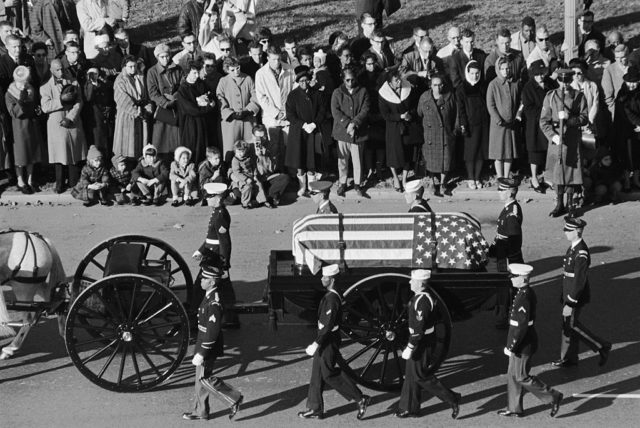 A horse-drawn caisson carrying the body of John Fitzgerald Kennedy passes mourners lining the streets of Washington from the White House to the Capitol. (Photo Credit: © Wally McNamee/CORBIS/Corbis via Getty Images)

The caisson used in President Kennedy’s funerary procession has an interesting history of its own. It also once carried the remains of President Franklin D. Roosevelt in 1945, and the Unknown Soldier in 1921. 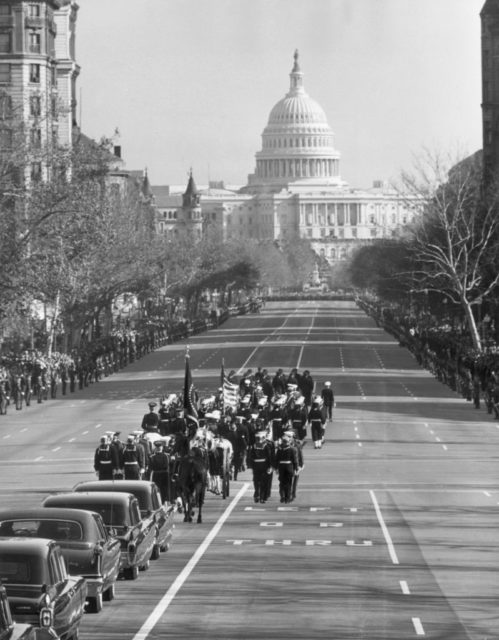 Mrs. Kennedy wanted the Black Watch to play at the funeral because their performance on the White House lawn was the last time she had seen her husband happy and playing with their children.

After President Kennedy was assassinated, his Vice President, Lyndon B. Johnson, took office as the President of the United States. One of his first acts as president was to declare Monday, November 25, 1963, a national day of mourning to allow Americans to watch the funeral procession. 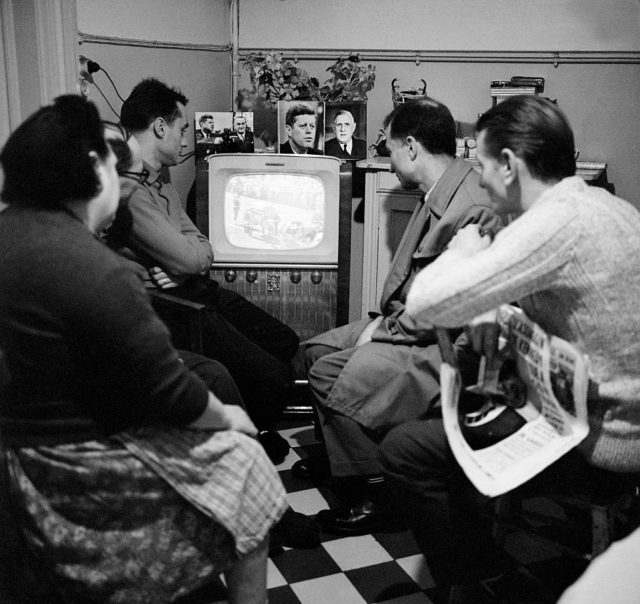 A French family gathers in front of the television, adorned, with photos of the late president, to watch his funeral on November 25, 1963. The President was shot on November 22, 1963. (Photo Credit: Bettmann / Contributor)

This day of mourning allowed for 41.5 million households in the United States alone to watch the funeral on TV, and an additional 800,000 people to gather in Washington D.C. to view the funerary procession in person.

Arguably the most famous photo to come from President Kennedy’s funeral was that of his son John F. Kennedy Jr. saluting his father’s casket. According to Jackie Kennedy’s former secret service agent, Clint Hill, JFK Jr. had been practicing his proper military salute for months. He accompanied his father on a visit to the Tomb of the Unknown Soldier at Arlington National Cemetery to do so. 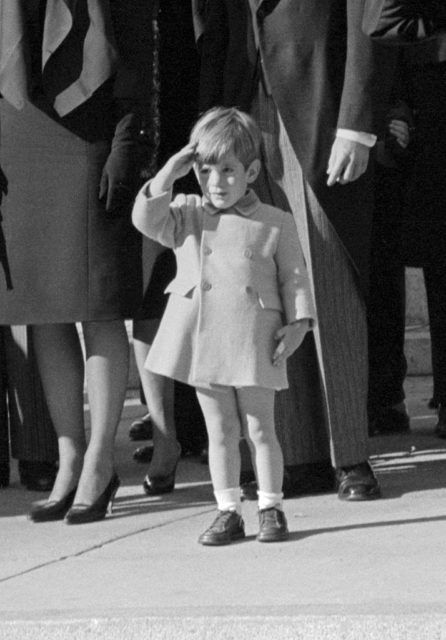 JFK Jr. struggled to remember the proper military salute, as he was inclined to use his left hand. However, on the day of the funeral, Hill said that Secret Service agents were trying to keep JFK Jr. occupied, so they once again began working with him on the military salute. A Marine colonel taught the child the proper hand technique, just as his father’s casket passed by. JFK Jr. was able to properly salute his father for the last time.

John F. Kennedy was America’s first Catholic president. When the president’s body first arrived back in Washington, it was put in the White House East Room. Jackie Kennedy asked two Catholic priests to stay with him and pray over his body until it was relocated to the US capitol the following day. 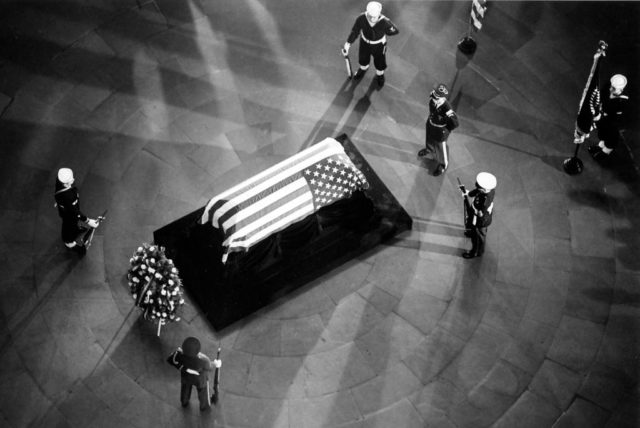 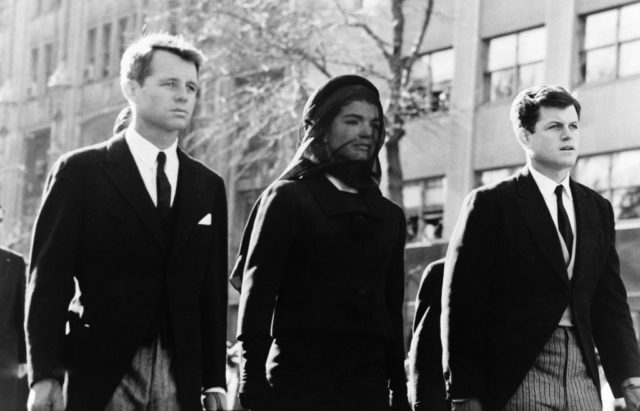 Robert Kennedy and Edward Kennedy with their sister in law Jacqueline Kennedy during the funeral of President John F Kennedy on november 25, 1963 in Washington DC, United States. (Photo Credit: Keystone-France/Gamma-Keystone via Getty Images)

The lying-in-state of Kennedy’s body in the Rotunda was modeled after Lincoln in 1865. Similarly, the catafalque that covered Abraham Lincoln’s coffin was brought out of storage and used again to display JFK’s casket. Jackie Kennedy’s insistence to walk behind her husband’s casket during the funeral procession was also a nod to Abraham Lincoln.

Dignitaries from 92 countries around the world attended JFK’s funeral to pay their respects, making it the largest gathering of foreign statesmen in the United States at this time. Former presidents Dwight Eisenhower and Harry Truman also attended President Kennedy’s funeral service, as it is customary for all former living presidents to attend the funeral of American presidents. 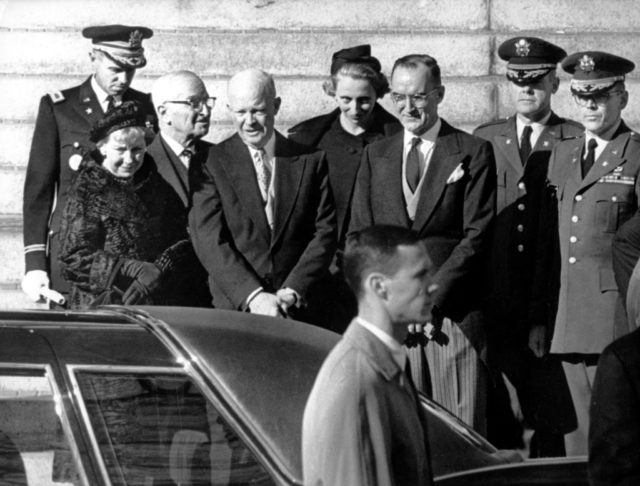 Supposedly, Eisenhower and Truman had a frosty relationship, but apparently patched things up at President Kennedy’s funeral. During the funeral, the former presidents rode together from St. Matthews Cathedral to Arlington National Cemetery.

One of the most haunting parts of President Kennedy’s funeral was the sound of the horse hooves keeping time as the funerary procession moved towards Arlington Cemetery. This sound came from a riderless horse named Black Jack – named after General John “Black Jack” Pershing, who followed the procession. 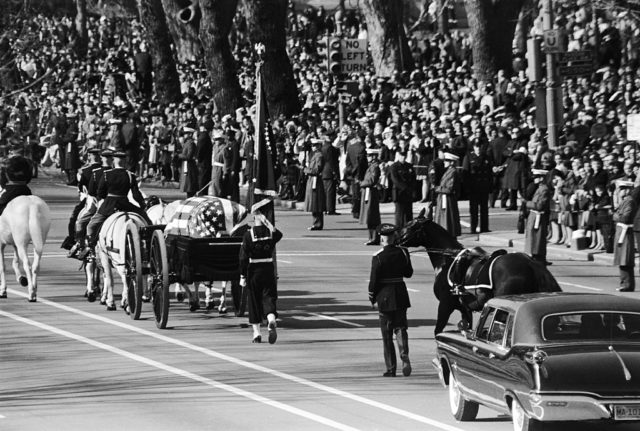 A horse-drawn caisson carrying the body of John Fitzgerald Kennedy passes mourners lining the streets of Washington from the White House to the Capitol. (Photo Credit: Wally McNamee/CORBIS/Corbis via Getty Images)

The riderless horse carried a pair of boots reversed in the stirrups. This is an ancient funerary motif that dates back to the time of Genghis Khan. It is meant to symbolize and commemorate a leader lost in battle. Prior to President Kennedy’s funeral, a riderless horse had been used to commemorate the death of President Roosevelt eighteen years earlier.

« These Are 6 of the Most Notorious Doctors in History
Superman v Brando: Why Christopher Reeve Wasn’t Impressed With His Onscreen Father »