After WWI There was Hunger in Europe. American children were encouraged To Help

World War I was terrible, but its aftermath was also ugly and not to be forgotten. After all the fighting was finished, as a result of the huge troops that passed trough Europe, there was hunger threatening almost all inhabitants. In 1918, the United States Food Administration made a book for the kids in the United States that was supposed to inform them about this situation and motivate them to help. The book was titled “Food Saving and Sharing: Telling How the Older Children of America May Help Save From Famine Their Comrades In Allied Lands Across the Sea” 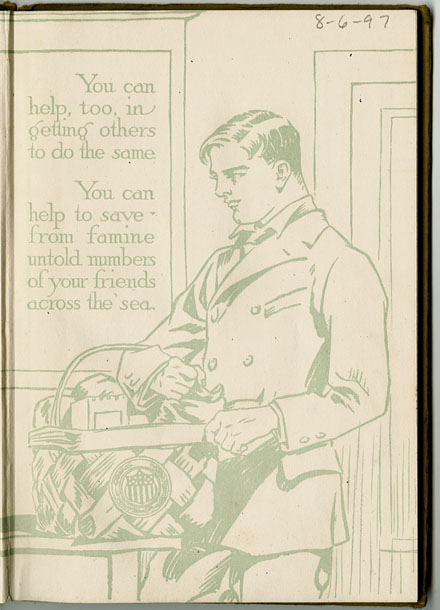 The book was published after a period of two years in which there were food restrictions in the country. The organization that made the book (United States Food Administration) was created by the request of Woodrow Wilson and his administration. In 1917, he passed the Lever Act that asked all American citizens to  eat less meat and sugar, to plant gardens, and to eat everything on their plates. The main target of this food campaign were children. As a result of this effort, there was a huge voluntary program called the “School Garden Army.” When this book was published they had more than 1,500,000 enlisted kids.

After the foreword, there is a short motivational message aimed for the kids of America, written by Herbert Hoover, the president of USA back in the time when the book was made:

“Now that the terrible war is over, you must be glad you help to win it by saving food for our soldiers and our unhappy friends across the sea. But our work of feeding hungry people is now to be greater than it has ever been. Many millions of people have been made free by our victory, but they are in the greatest danger of death from starvation. They look to America for food until the next harvest. We must go on saving and sharing with them as faithfully as ever. And of course, you will want to do your part as you have been doing it. To save the world from famine will be a greater task than any of us can imagine, but we can do it if each of us does all he can. I am counting on you. Faithfull yours, Herbert Hoover.”

This informational book wanted to explain to children that even if the war has ended, there was still much work to be done in Europe. The authors wanted to tell the kids that there is not yet time to be relieved and get back to old habits.

At the beginning of the book there is a map that shows the most hunger affected countries: 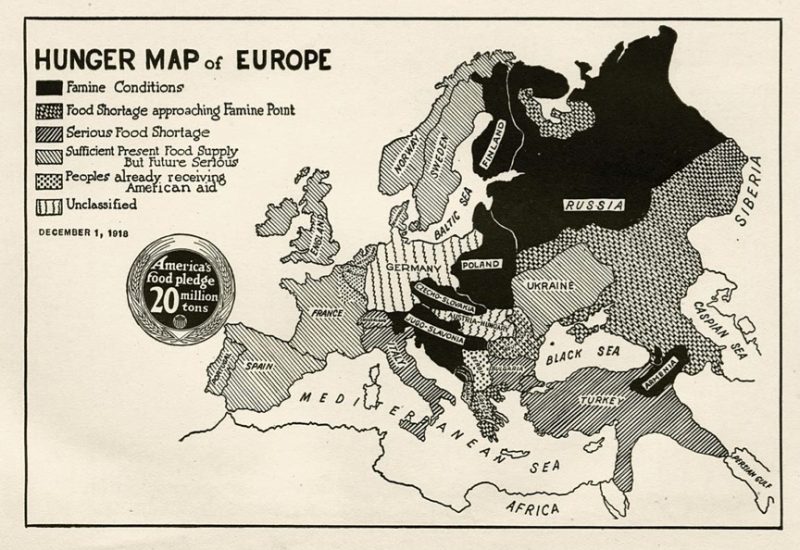 The hunger map of Europe as shown in the book / Image credit: the Human Ecology Collection, University of Wisconsin Digital Collections

Children were told that they can help the Allies from the war with their hunger problem. The book reminded them what was the cause of the food shortage in Europe and Russia. One of the causes mentioned back then was, of course, German villainy:
“Everyone knows…how the German armies behaved after they had made their way into Belgium; how they murdered and tortured and looted and destroyed, They were not unwilling that the Belgians should starve. The more that died the better; then the land would be free for them to occupy In France the Germans set to work deliberately to do as much harm as possible,” destroying fruit trees and vineyards; they poisoned wells and burned houses.“

The readers were also asked to invent a new food diet that will be more disciplined and healthy, as a sign that the nation is becoming mature. The authors were saying that, back then, the United States were a relatively “young country” and, therefore, it was still “greedy.” That wasn’t appropriate for a nation that is presenting itself on the world stage for the first time on its own. 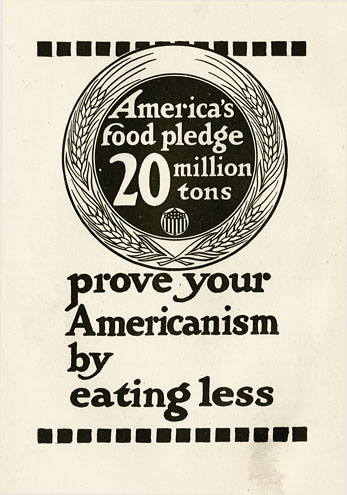