1612 map of Canada, drawn by Samuel de Champlain, recovered after stolen by a collector 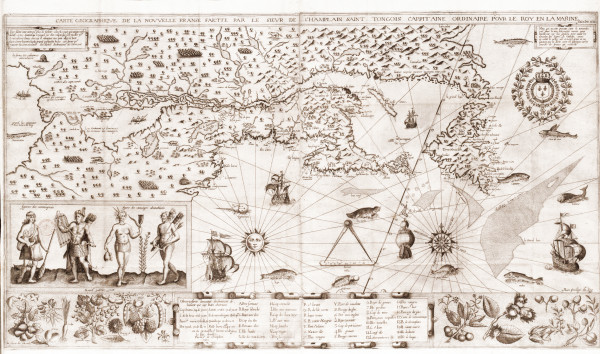 Ronald Grim, a librarian and historian, believes that a visitor once walked right through a library’s front door with a rare map hidden beneath his jacket.  The map happened to be one of Samuel de Champlain’s hand drawn maps – his first representation of Canada.  The map was originally on display at the Boston Public Library; Grim had just started working there in 2005 when the map was discovered and recovered from the auction house. Grim was paging through a New York antique catalog and he couldn’t believe his eyes – there was a photo of that very map, which was up for auction.  He said that the photo of the map makes it look as if the map had been torn.  However, he said that he expected it to tear quite easily if handled improperly.

Earlier, Grim saw that there was an X-acto knife lying on the floor at a reading room in Yale University.  He ended up calling police so they could confront one suspicious-looking person.  What made the person stick out was that he had a giant tweed coat on.  After further questioning and investigating, police uncovered dozens of maps hidden in the coat.

Police and librarians nationwide were told that the suspect was E. Forbes Smiley, who was known everywhere as an avid map collector.  This new information forced librarians to take inventory on everything Smiley had ever requested to look at.

Grim said that it was his job to check Boston Library’s inventory records.  He found that Smiley had asked to view a book called Les Voyages du Sieur de Champlain.  It is an illustrated book of all of Champlain’s missions and voyages throughout Canada and the United States.

Smiley had looked at the book once in 1988 and again in 2003.  Curators found two whole maps torn out of this book. After more investigation Smiley admitted that he stole 97 maps; 34 from Boston’s library alone.  However, the Champlain New France map was not among those he stole.

This led Grim and other curators at the Boston Library to scour antique newspapers and magazines, hoping to one day find evidence of this map being put up for sale.  In July, Grim saw a picture that could possibly be the map.  It was selling for $285,000.

Boston’s Champlain map is only a copy, however that still does not mean it’s not worth anything.  The U.S. Library of Congress and Canada both keep original copies in vaults.

The book that the map was stolen from has actually had many owners and has passed through auctions several times.  In 2009, one copy sold at a Christie’s auction for $68,000.  After the sale, this became known as one of six copies of the book to change owners since the 1970s.

After seeing the picture of the Champlain map, Grim knew he had to act fast before it sold.  However, he had to make sure it was the library’s copy.  Thankfully, the librarians had taken photos of the map in 1992 for the library records.  Grim then used those photos by going to the auction and  proving that the map was Boston’s by matching three small tears and a small hole in the juncture of a fold. Thankfully the dealer was understanding and cooperative.  Grim said it could have gotten quite messy if the dealer hadn’t been so helpful.

Since the map has been returned to the library it has brought in visitors drawn by the press coverage of its theft. Curators and librarians believe the map had never before had as much attention. It is now under a pane of glass in the library and is on display at the Central Library for viewing. Grim said that in the 27 years since the library acquired the map, the book had only been taken off the shelf three times – the two times by Smiley and one other time to be photographed by a librarian.

The map was drawn up in 1612 and was originally named “Geographic Map of New France”.  Samuel de Champlain was the original founder of Quebec City.  After drawing out the map, he went back to France to show people how many forests, lakes, and rivers there were.  The endless possibilities of a new life and new trades caught people’s attention.

On the map where Labrador is now, Samuel de Champlain wrote a small word: “Canadas.”  Perhaps he had intended on calling the little islands Canadas.

« The Rise and Fall of “Scarface”- Photos of the notorious gangster Al Capone
In a secret Paris cavern, the real underground cinema »