Designed by John Haviland and opened on October 25, 1829, Eastern State is considered to be the world’s first true penitentiary. Eastern State’s revolutionary system of incarceration, dubbed the “Pennsylvania system” or separate system, encouraged separate confinement (the warden was legally required to visit every inmate every day, and the overseers were mandated to see each inmate three times a day) as a form of rehabilitation.

The Pennsylvania System was opposed contemporaneously by the Auburn system (also known as the New York system), which held that prisoners should be forced to work together in silence, and could be subjected to physical punishment (Sing Sing prison was an example of the Auburn system). Although the Auburn system was favored in the United States, Eastern State’s radial floor plan and system of solitary confinement was the model for over 300 prisons worldwide.

Originally, inmates were housed in cells that could only be accessed by entering through a small exercise yard attached to the back of the prison; only a small portal, just large enough to pass meals, opened onto the cell blocks. This design proved impractical, and in the middle of construction, cells were constructed that allowed prisoners to enter and leave the cell blocks through metal doors that were covered by a heavy wooden door to filter out noise. The halls were designed to have the feel of a church. 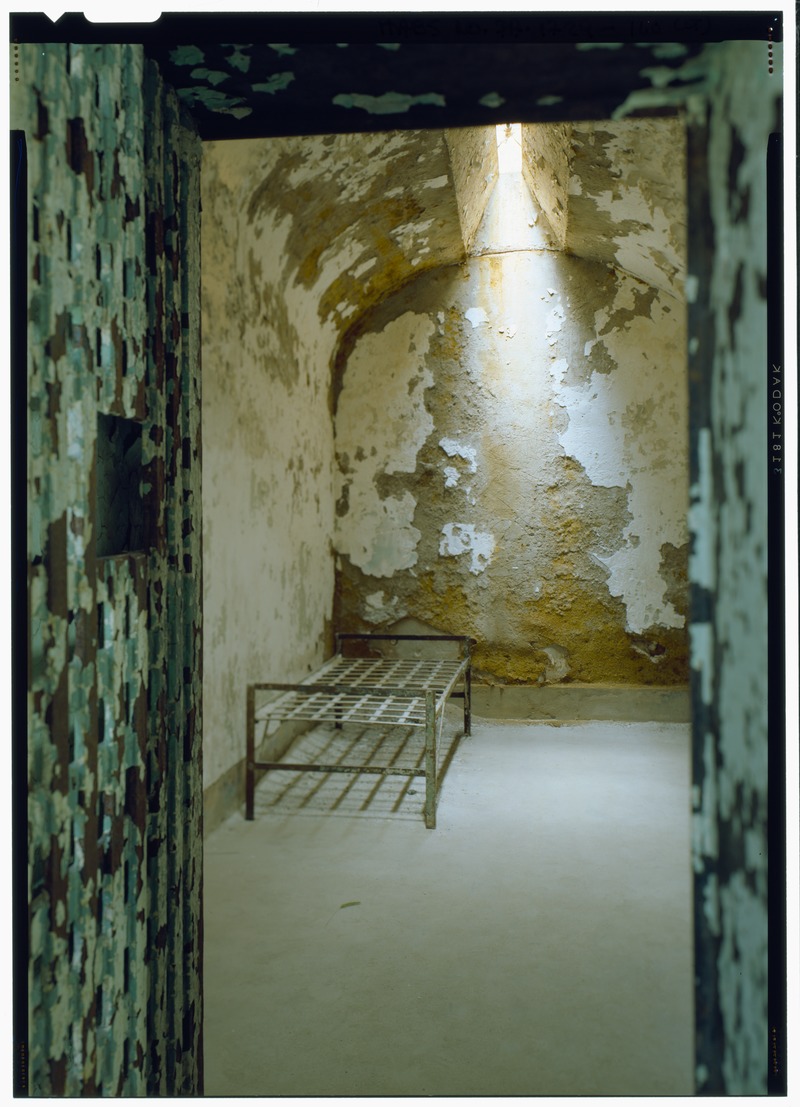 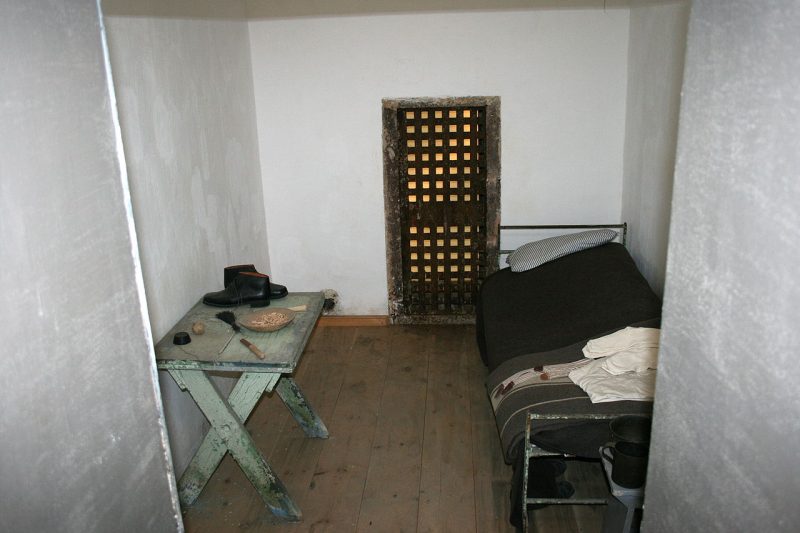 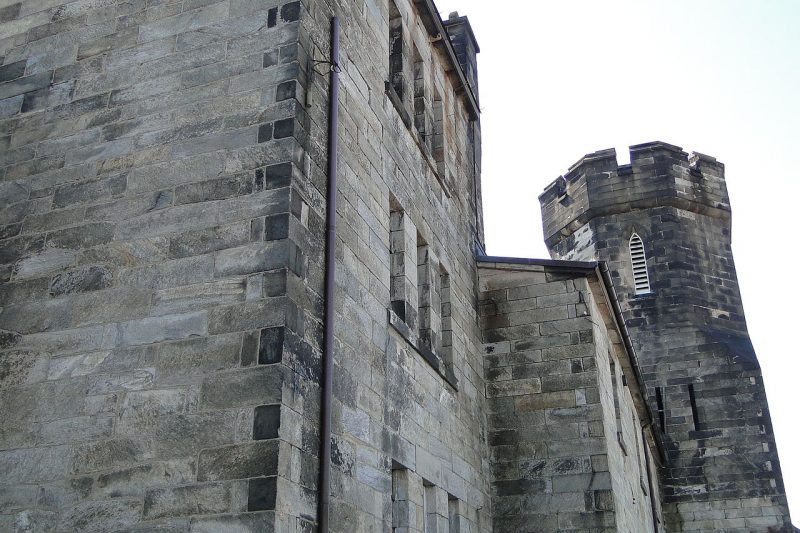 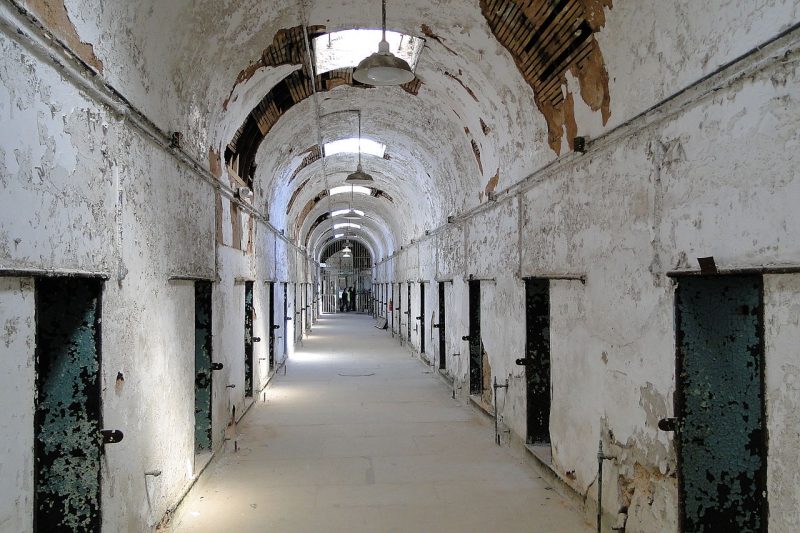 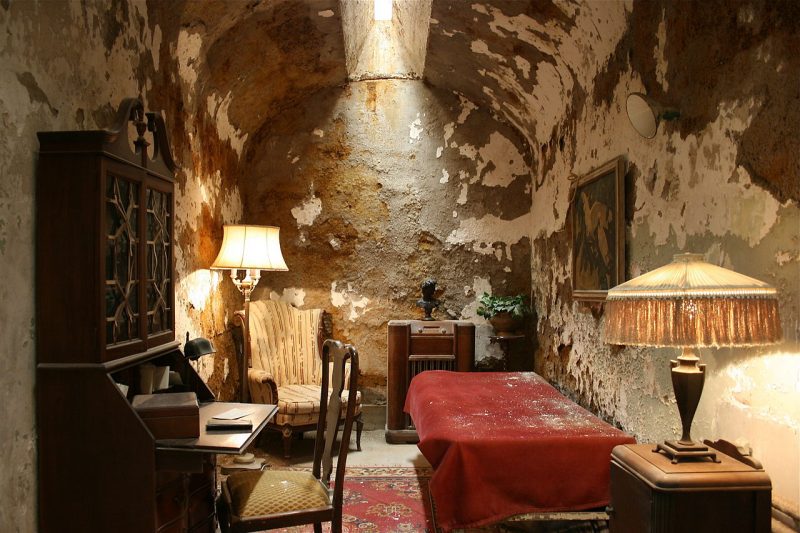 The prison was one of the largest public-works projects of the early republic, and was a tourist destination in the 19th century. Notable visitors included Charles Dickens and Alexis de Tocqueville while notable inmates included Willie Sutton and Al Capone in 1929. Visitors spoke with prisoners in their cells, proving that inmates were not isolated, though the prisoners themselves were not allowed to have any visits with family or friends during their stay. 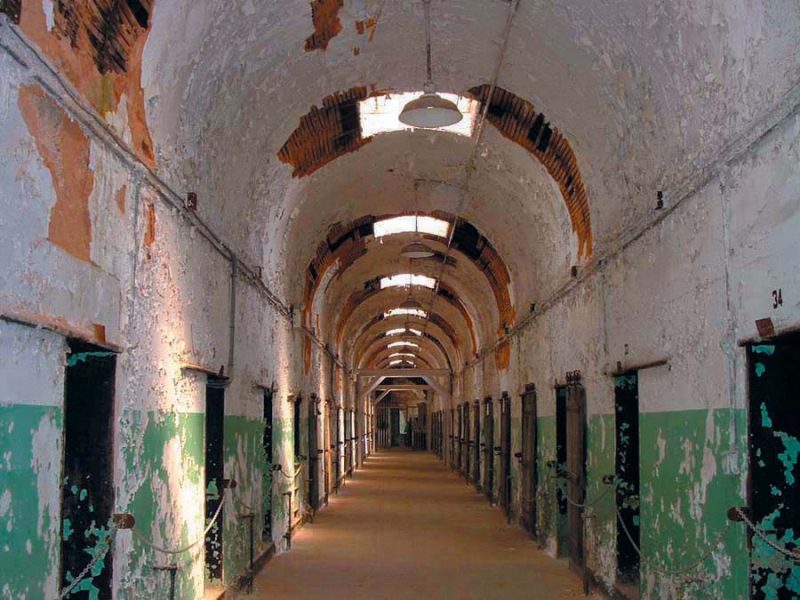 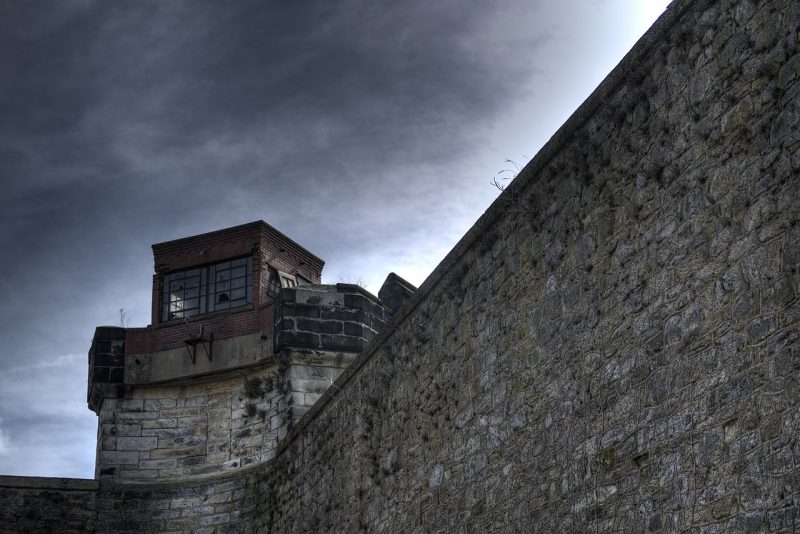 The Penitentiary was intended not simply to punish, but to move the criminal toward spiritual reflection and change. While some have argued that the Pennsylvania System was Quaker-inspired, there is little evidence to support this; the organization that promoted Eastern State’s creation, the Society for Alleviating the Miseries of Public Prisons (today’s Pennsylvania Prison Society) was less than half Quaker, and was led for nearly fifty years by Philadelphia’s Anglican bishop, William White. Proponents of the system believed strongly that the criminals, exposed, in silence, to thoughts of their behavior and the ugliness of their crimes, would become genuinely penitent.

In reality, the guards and councilors of the facility designed a variety of physical and psychological torture regimens for various infractions, including dousing prisoners in freezing water outside during winter months, chaining their tongues to their wrists in a fashion such that struggling against the chains could cause the tongue to tear, strapping prisoners into chairs with tight leather restraints for days on end, and putting the worst behaved prisoners into a pit called “The Hole”, an underground cellblock dug under cellblock 14 where they would have no light, no human contact, and little food for as long as two weeks. 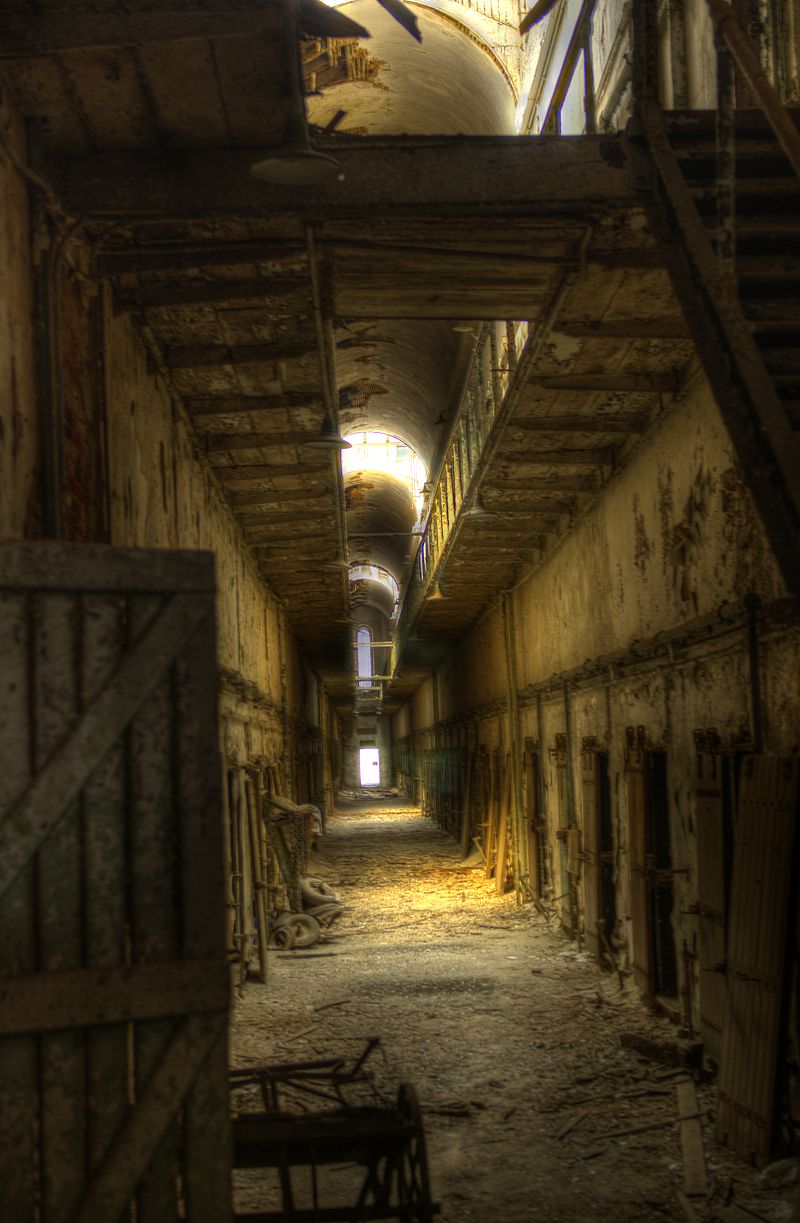 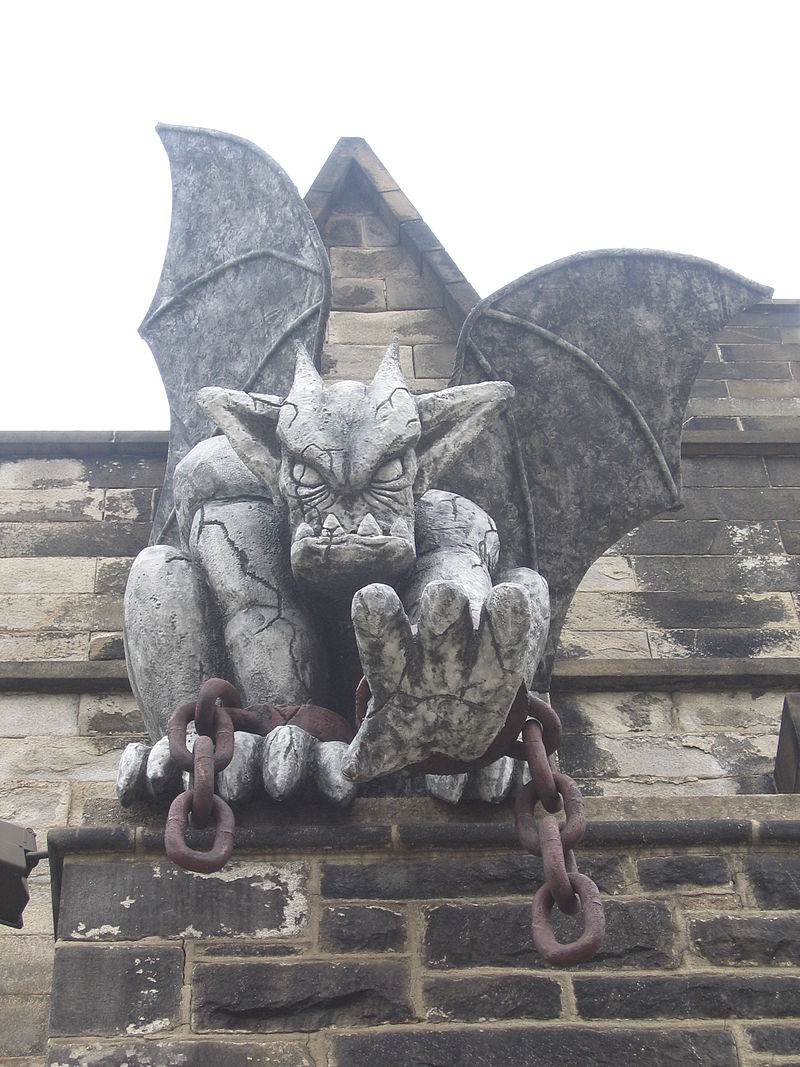 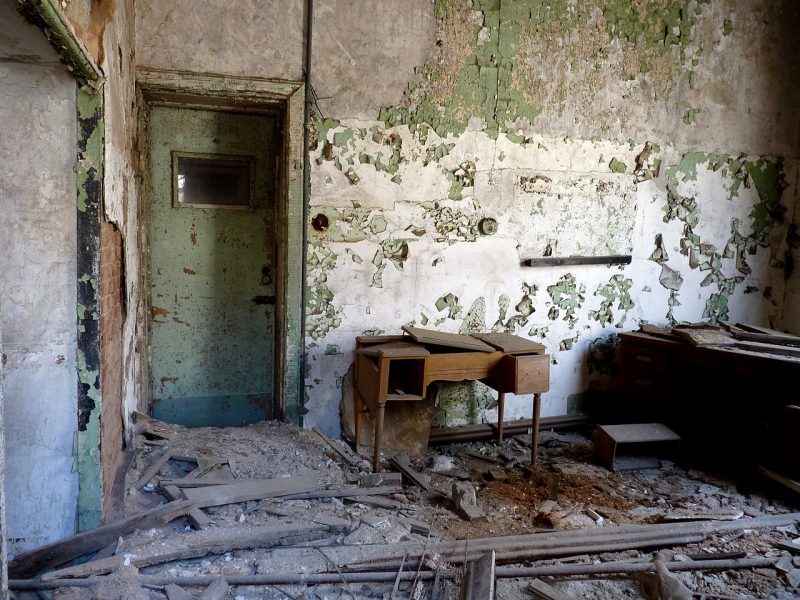 Some believe that the doors were small so prisoners would have a harder time getting out, minimizing an attack on a security guard. Others have explained the small doors forced the prisoners to bow while entering their cell. This design is related to penance and ties to the religious inspiration of the prison. The cells were made of concrete with a single glass skylight, representing the “Eye of God”, suggesting to the prisoners that God was always watching them.

Outside the cell was an individual area for exercise, enclosed by high walls so prisoners could not communicate. Exercise time for each prisoner was synchronized so no two prisoners next to each other would be out at the same time. Prisoners were allowed to garden and even keep pets in their exercise yards. When a prisoner left his cell, an accompanying guard would wrap a hood over his head to prevent him from being recognized by other prisoners. 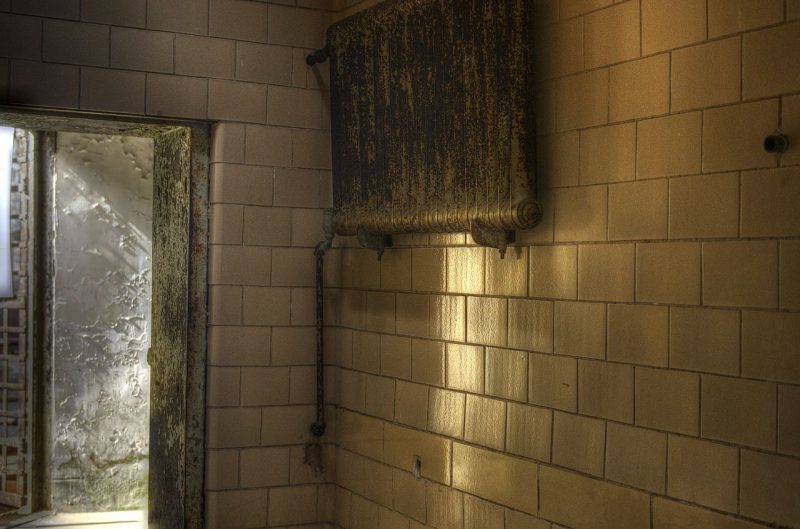 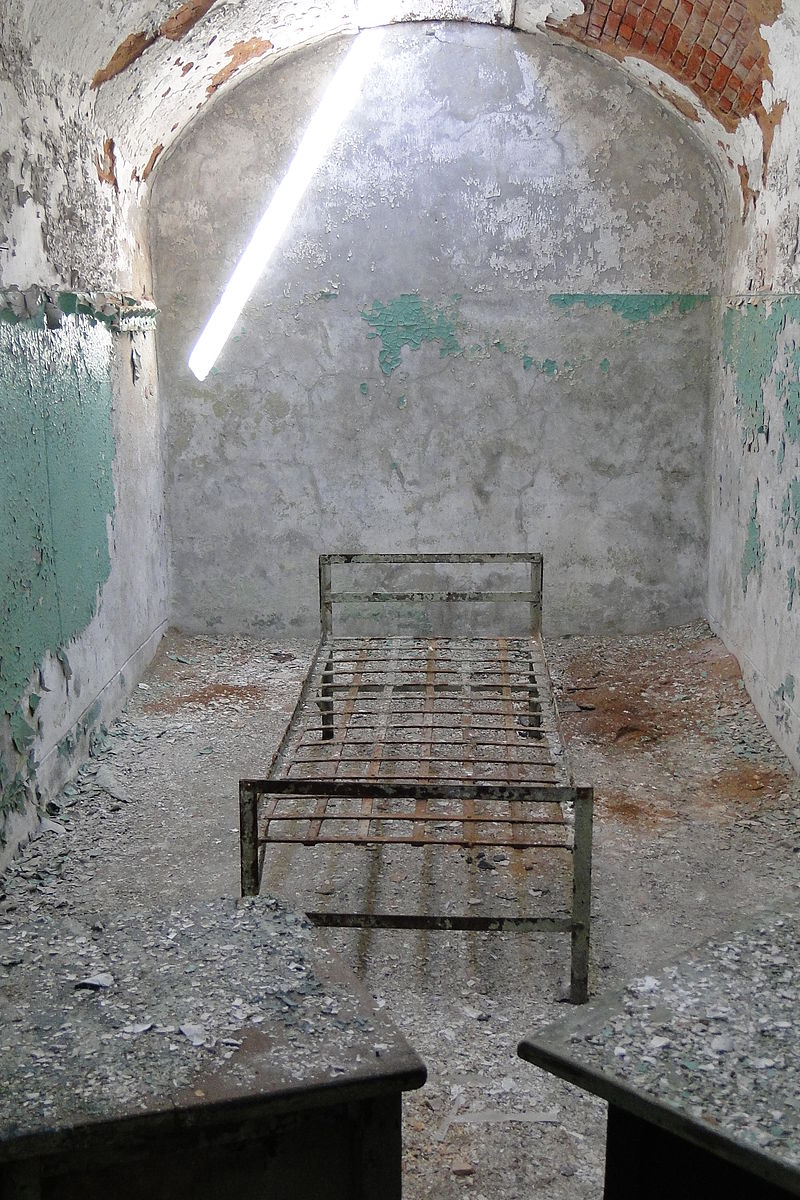 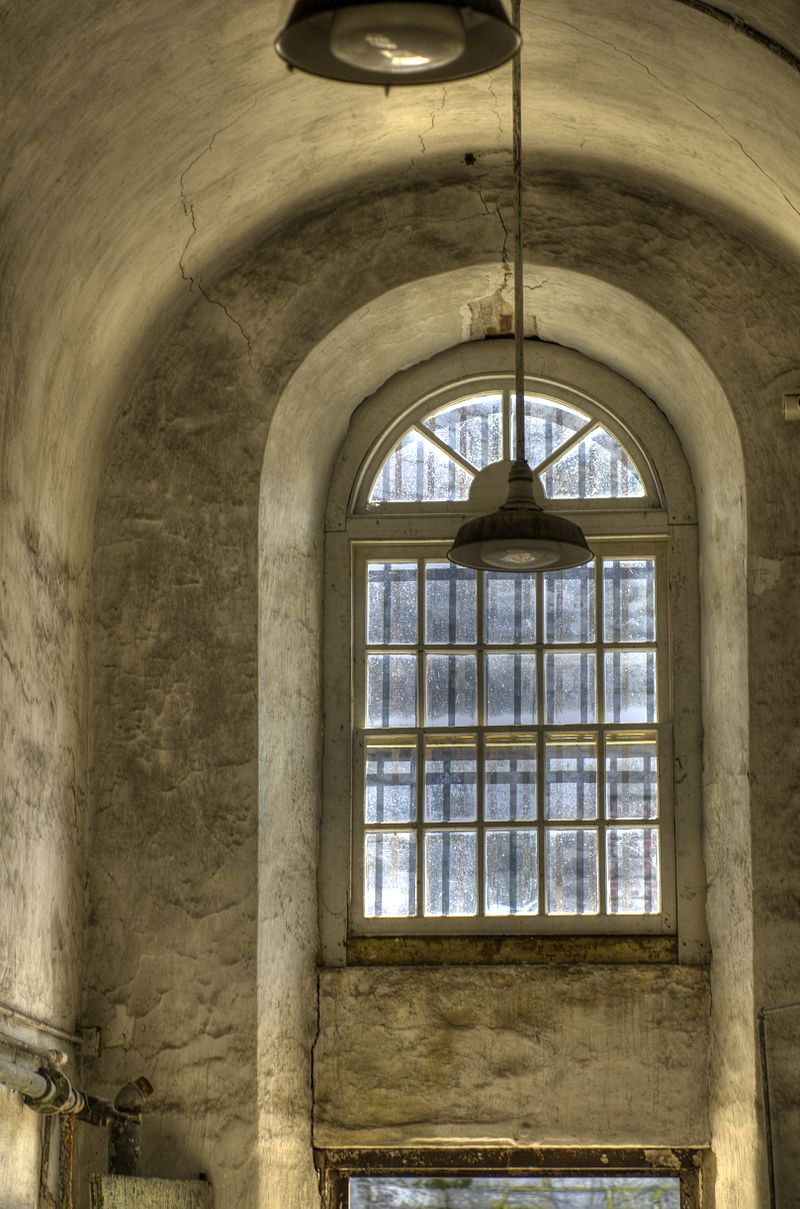 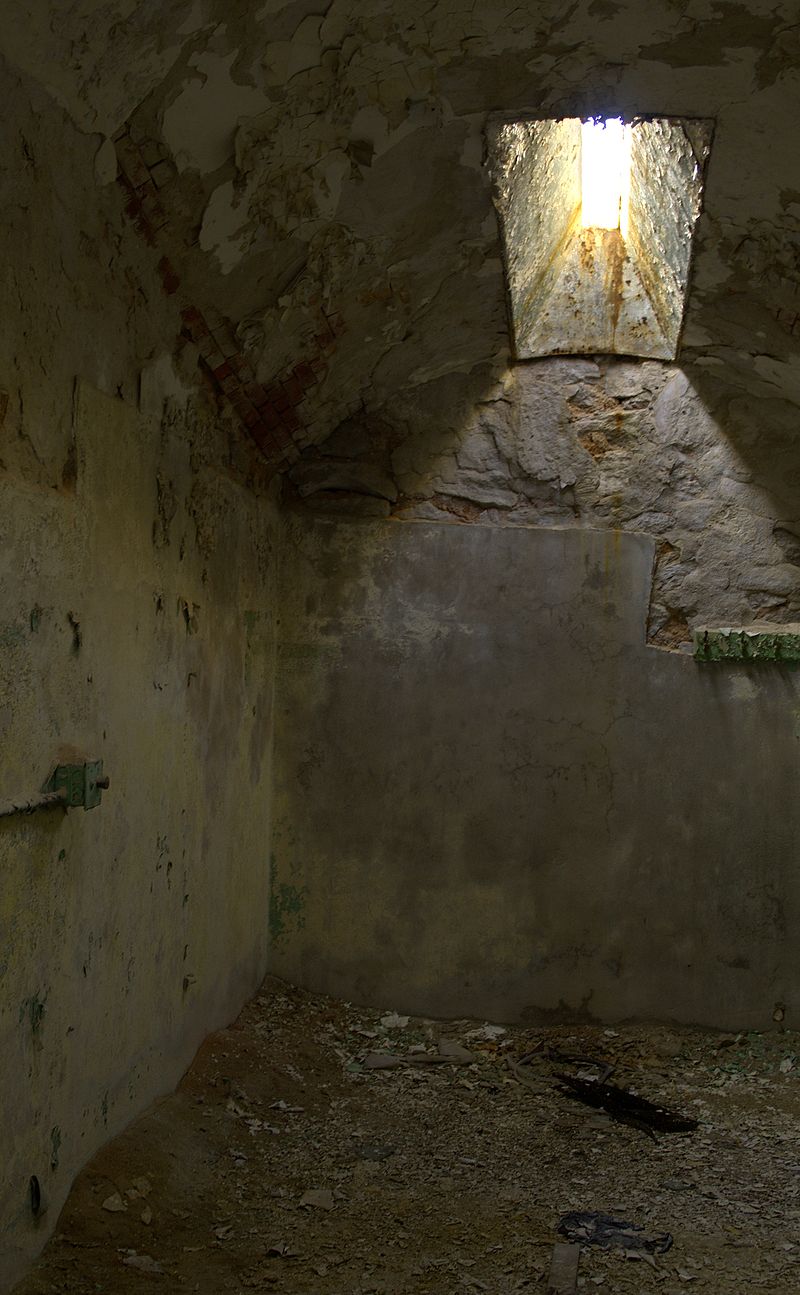 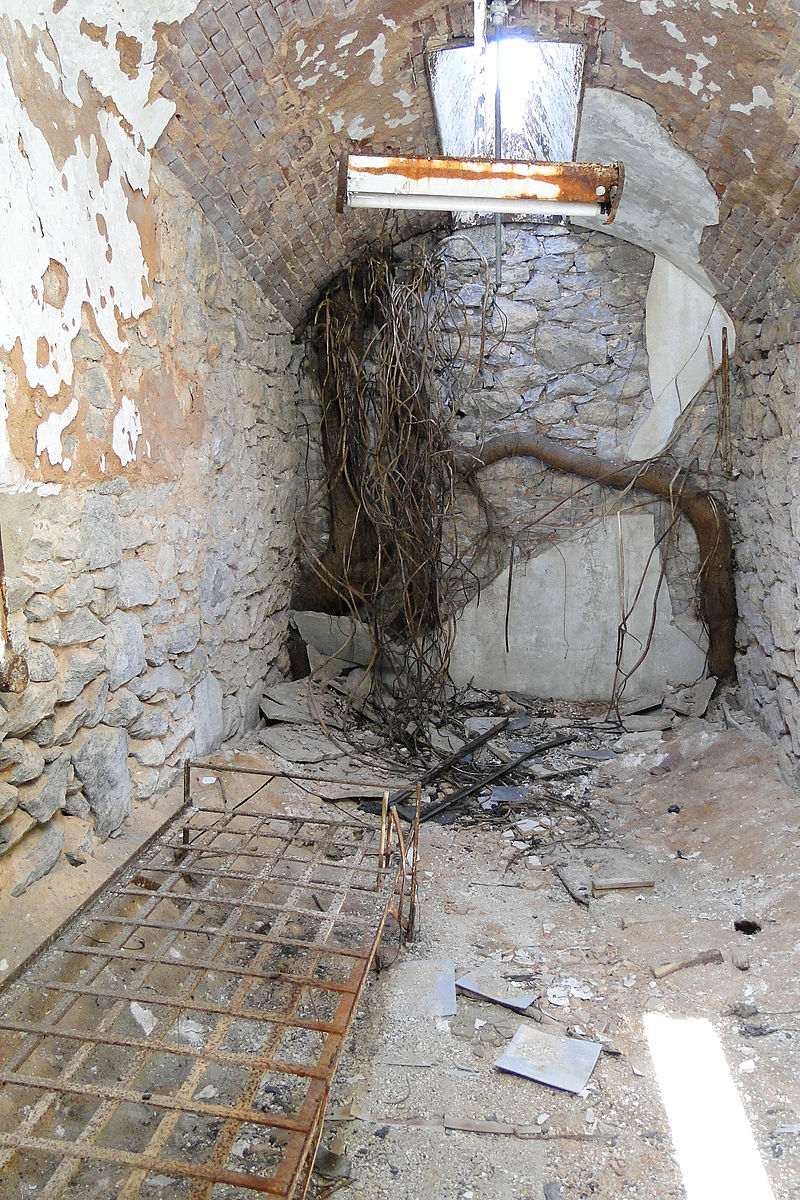 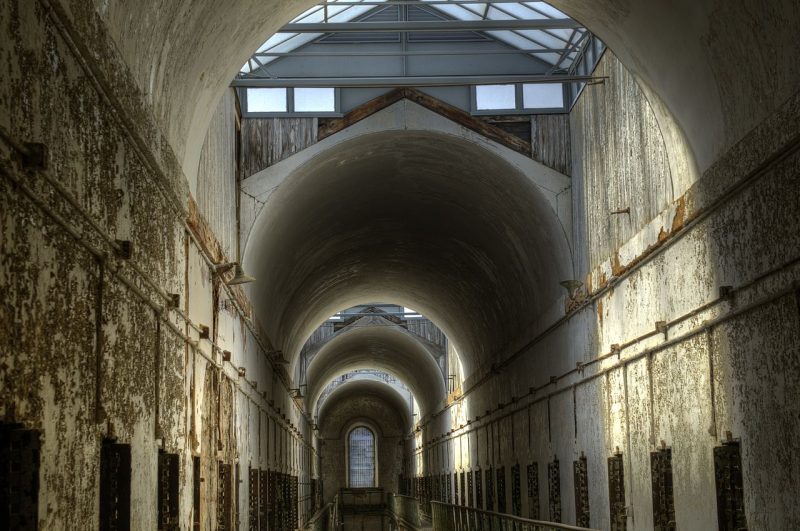 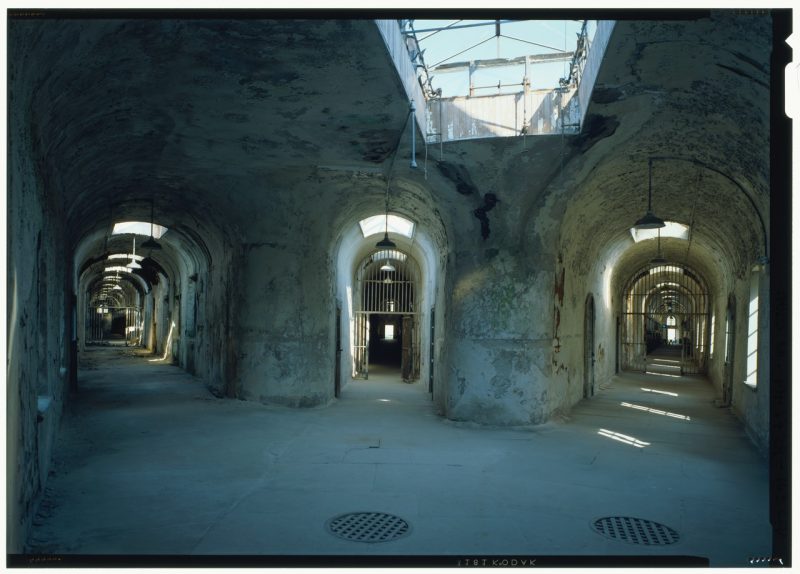 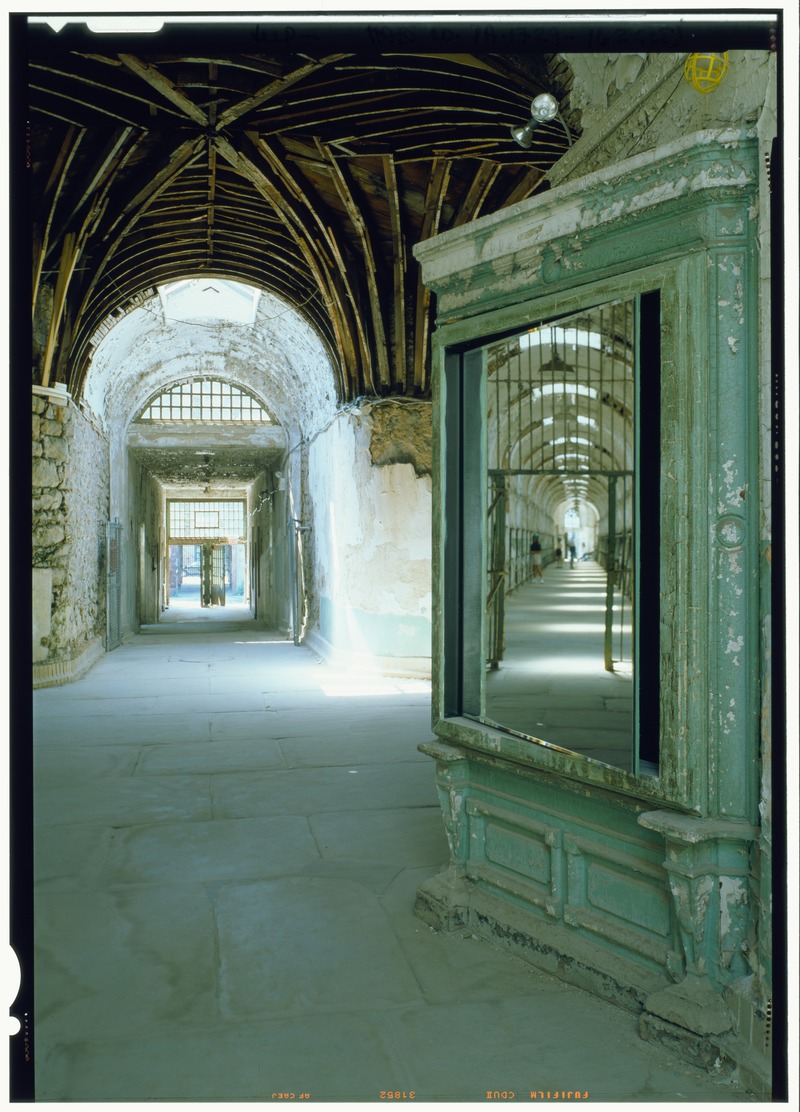 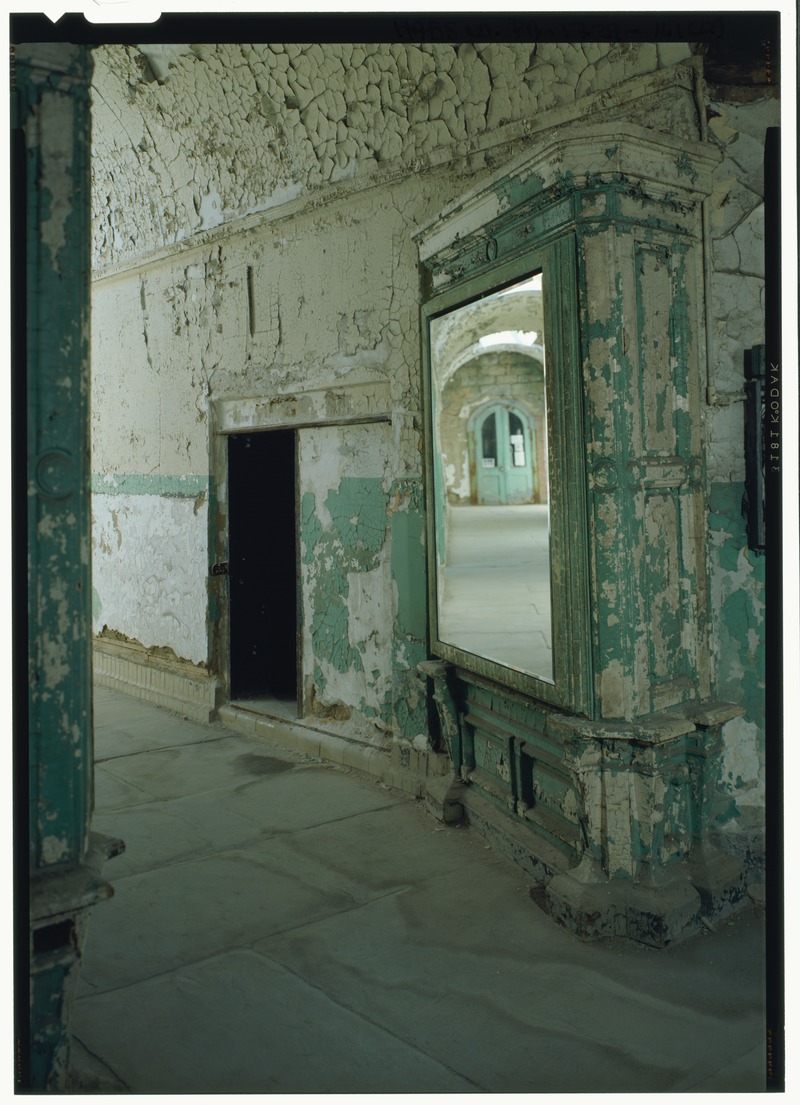 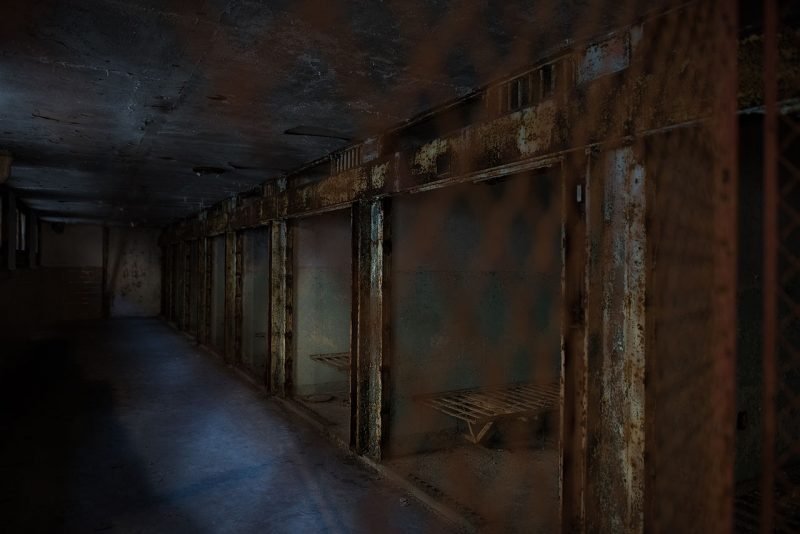 Cell accommodations were advanced for their time, including a faucet with running water over a flush toilet, as well as curved pipes along part of one wall which served as central heating during the winter months where hot water would be run through the pipes to keep the cells reasonably heated. Toilets were remotely flushed twice a week by the guards of the cellblock.

The original design of the building was for seven one-story cell blocks, but by the time cell block three was completed, the prison was already over capacity. All subsequent cell blocks had two floors. Toward the end, cell blocks 14 and 15 were hastily built due to overcrowding. They were built and designed by prisoners. Cell block 15 was for the worst behaved prisoners, and the guards were gated off from there entirely. 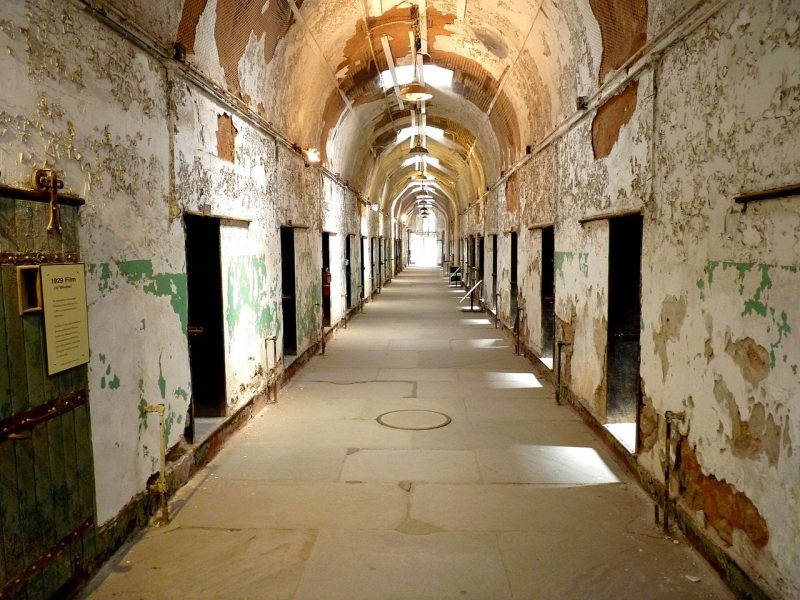 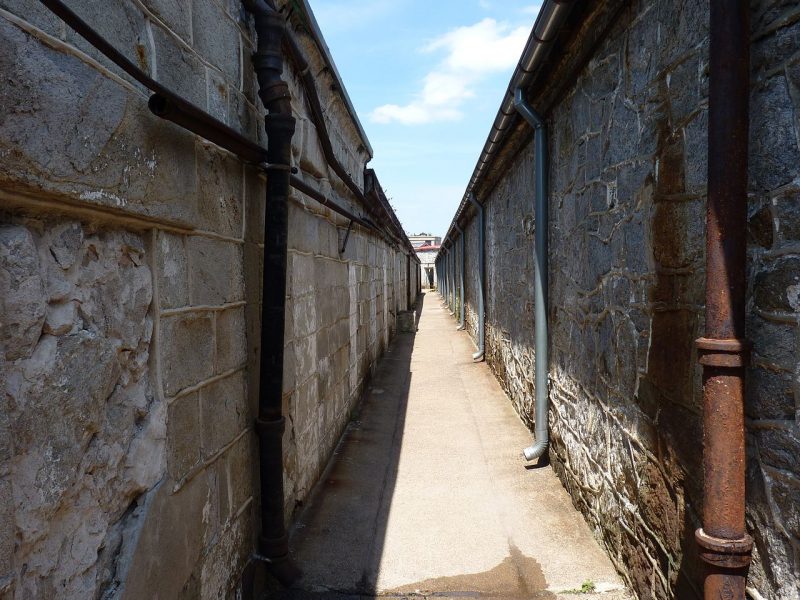 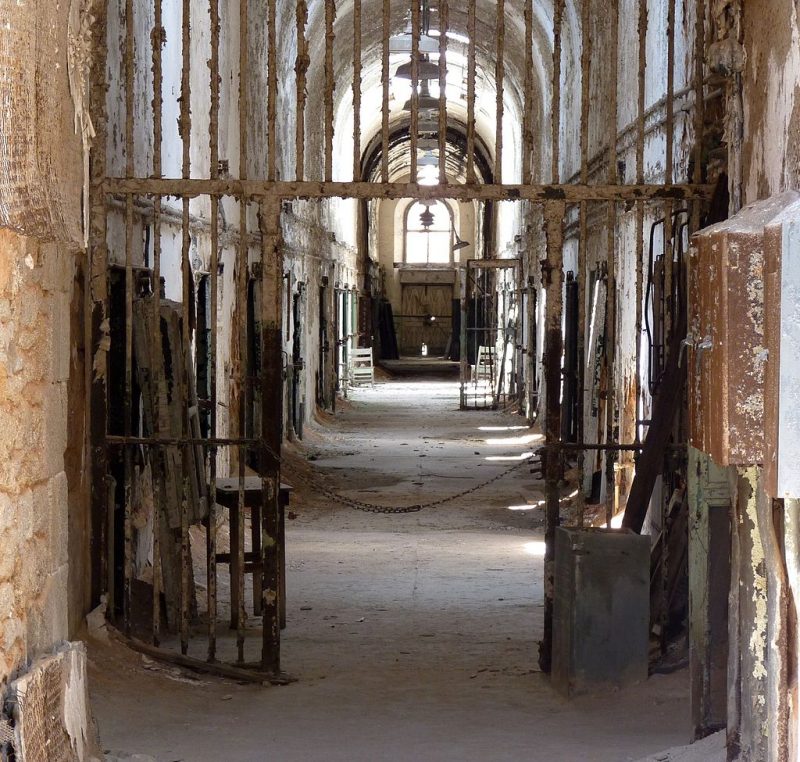 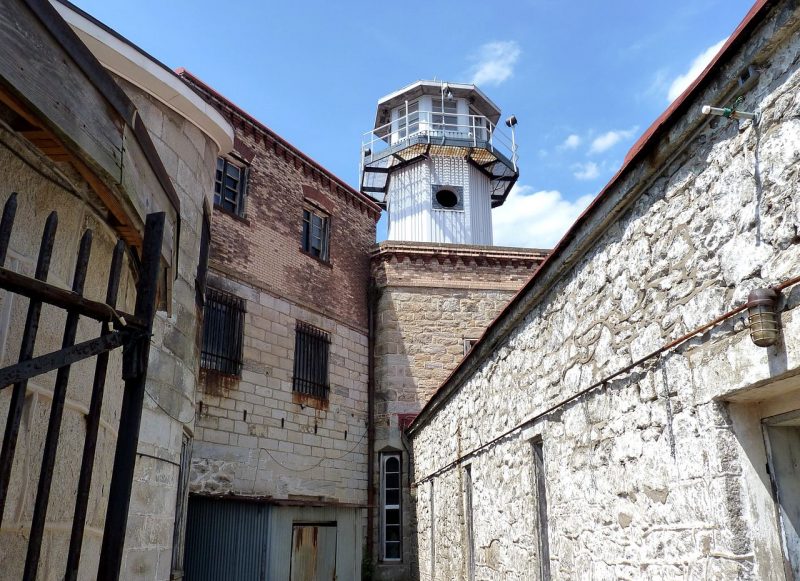 Inmates were punished with the “individual-treatment system.” At the time this form of punishment was thought to be most effective. They would be separated from others.

In 1924, Pennsylvania Governor Gifford Pinchot allegedly sentenced Pep “The Cat-Murdering Dog” (an actual dog) to a life sentence at Eastern State. Pep allegedly murdered the governor’s wife’s cherished cat. Prison records reflect that Pep was assigned an inmate number (no. C2559), which is seen in his mug shot. However, the reason for Pep’s incarceration remains a subject of some debate. A contemporary newspaper article reported that the governor donated his own dog to the prison to increase inmate morale.

On April 3, 1945, a major escape was carried out by twelve inmates (including the infamous Willie Sutton), who over the course of a year managed to dig an undiscovered 97-foot (30 m) tunnel under the prison wall. During renovations in the 1930s an additional 30 incomplete inmate-dug tunnels were discovered.

The prison was closed in 1971. Many prisoners and guards were transferred to Graterford Prison, about 31 miles (50 km) northwest of Eastern State. The City of Philadelphia purchased the property with the intention of redeveloping it. The site had several proposals, including a mall and a luxury apartment complex surrounded by the old prison walls

During the abandoned era (from closing until the late 80s) a “forest” grew in the cell blocks and outside within the walls. The prison also became home to many stray cats. 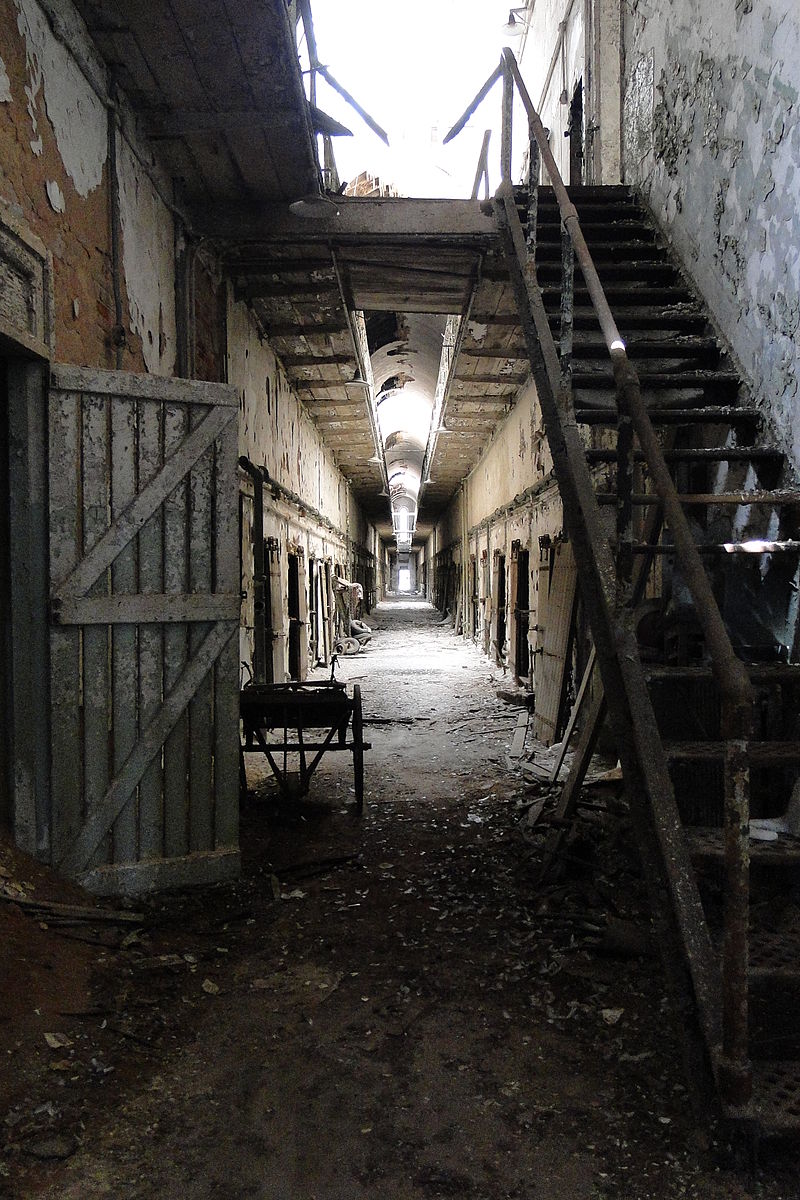 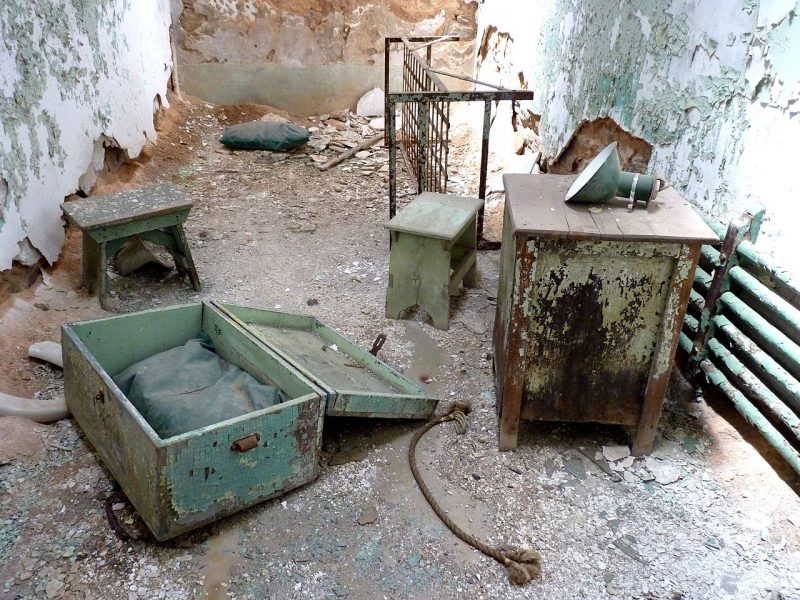 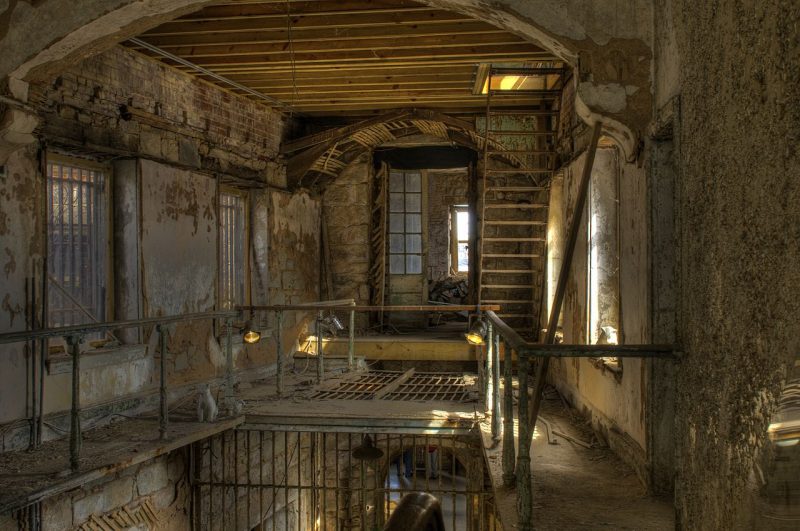 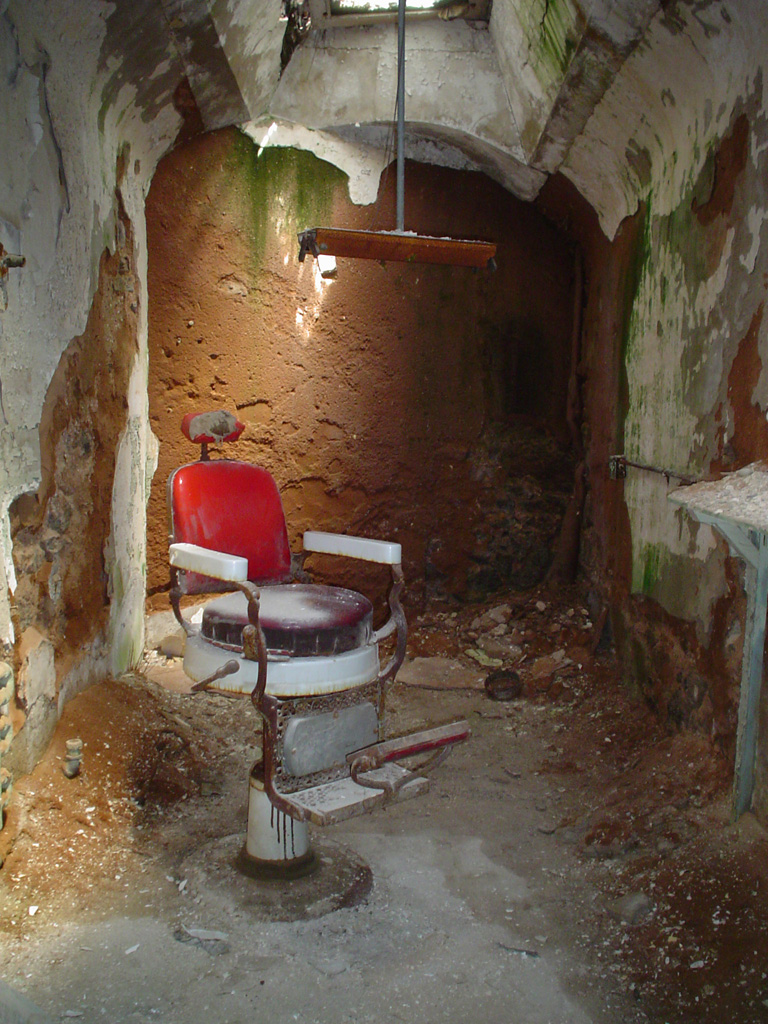 The remains of the barber shop. Wikipedia 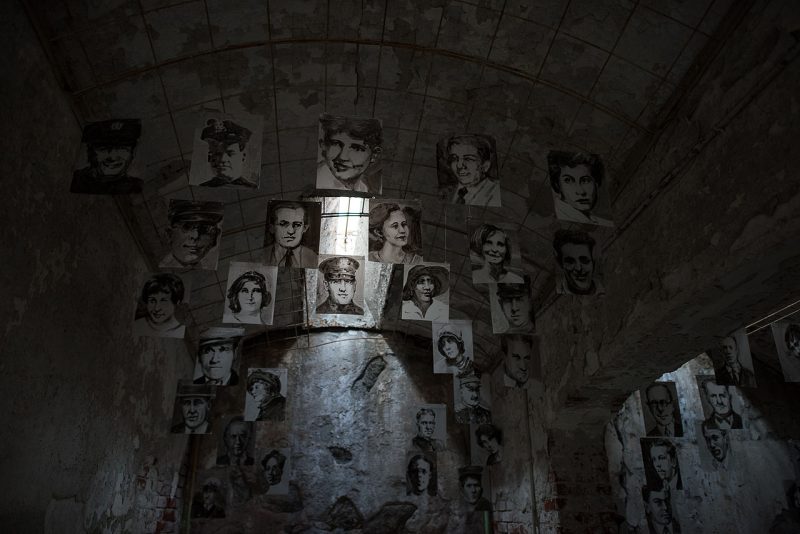 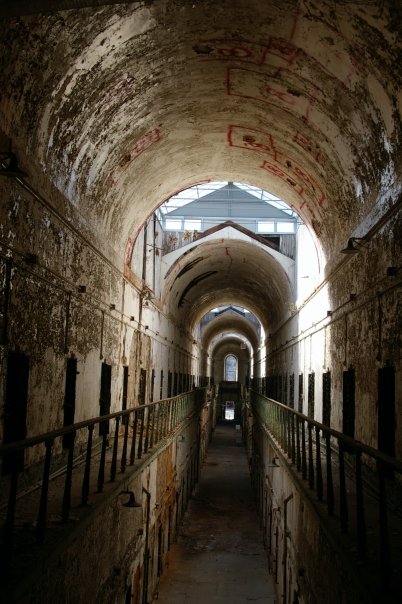 One of the two-story cell blocks in Eastern State Penitentiary. Wikipedia

The Eastern State Penitentiary operates as a museum and historic site, open year-round. Guided tours are offered during the winter, and during the warmer months, self-guided recorded tours with headphones are also available (narrated mainly by Steve Buscemi, with former guards, wardens and prisoners also contributing). A scavenger hunt is available for children.