The 1986 accident at the Chernobyl nuclear power plant in Pripyat, Ukraine, is the only accident in the history of commercial nuclear power to cause fatalities from radiation. There was a sudden and unexpected power surge, and when an emergency shutdown was attempted, an exponentially larger spike in power output occurred, which led to a reactor vessel rupture and a series of steam explosions, creating the worst nuclear accident in history. The explosion dispersed large quantities of radioactive fuel and core materials into the atmosphere. 40 hours later, the residents of Pripyat were ordered to evacuate, and most never returned. By that time, many of the residents had suffered varying degrees of radiation poisoning. No one knows how many people died of radiation exposure. In 2005, the United Nations estimated 4,000 deaths; critics such as Greenpeace predict 93,000 cancer deaths in time. Almost 30 years after the Chernobyl disaster, tours now run regularly into the exclusion zone visiting Chernobyl Town, Pripyat and even the exterior of Reactor #4 itself. 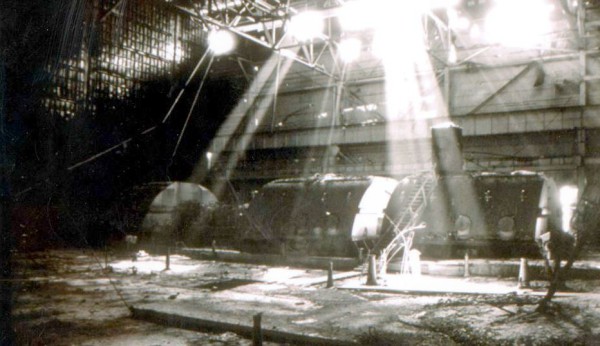 The inside of the tomb which encases Chernobyl’s unit 4 reactor which exploded, leaking vast amounts of radiation

Kopachi was a village near Chernobyl, Ukraine, just south-west of the Pripyat River Basin, in Ivankovsky district of Kiev region. It was located 7km from the Chernobyl reactor that housed the control room and decontamination area in the months after the disaster. The Chernobyl disaster highly contaminated Kopachi with high-level radioactive fallout; the village was subsequently evacuated and is now within the Chernobyl Exclusion Zone. After the evacuation, the majority of the village ended up being bulldozed and buried beneath the earth. A bulldozer would dig a large trench in front of each house before burying the building and covering it with earth and flattening the soil. The fear was that if the wooden buildings caught fire, more radioactive isotopes would be released into the atmosphere.

The government did not recognize the fact that these highly contaminated buildings and houses would seep radioactive isotopes into the water table. Burying the buildings drove radio-toxins deeper into the environment. The soil and water surrounding the former village remain contaminated with radioactive materials including plutonium, strontium-90, and cesium-137. Other villages in the exclusion zone faced a similar fate, thus polluting the aquifer.

The only traces left of the village today are a series of mounds and a small number of surviving trees which are not part of the local native flora. One of the only buildings to survive is the old kindergarten. This kindergarten and one other brick building are the only architectural structures that remain standing. All that remains of the other buildings are small mounds topped with a sign showing the international radiation symbol. At the moment, the territory is not inhabited. It’s amazing what still remained in the kindergarten 29 years after the original evacuation. The windows have rotted and the front door hangs on a single hinge. There are various toys in most rooms, children’s books were scattered across the floor and the children’s original bunk beds are still in place. 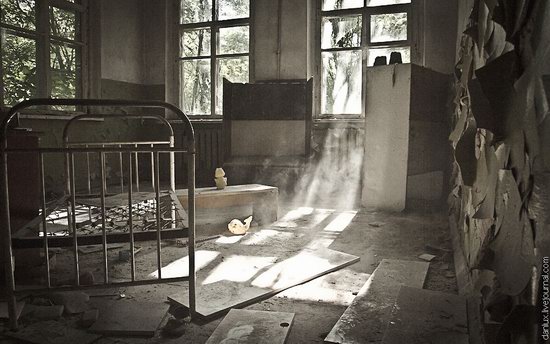 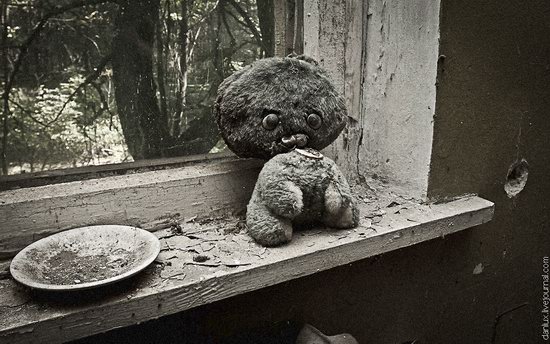 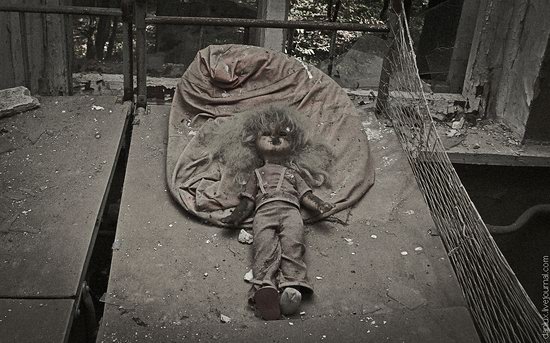 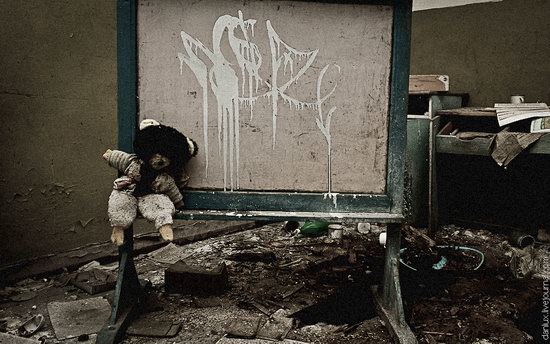 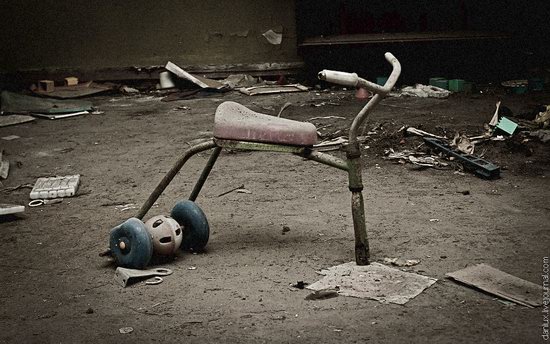 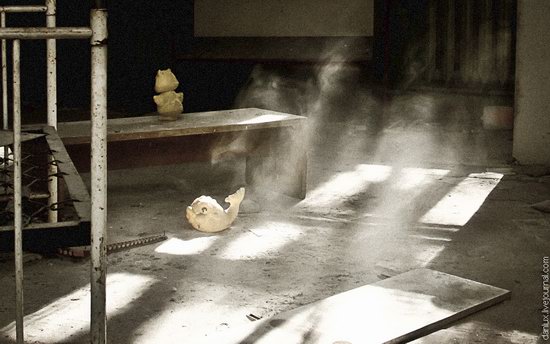 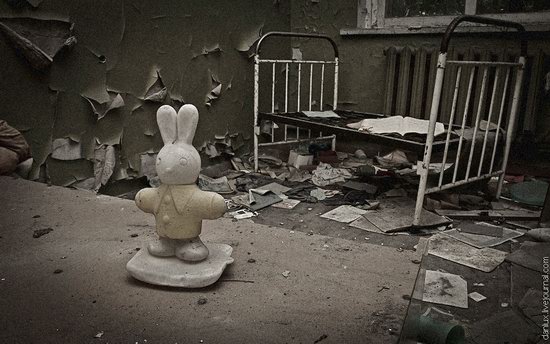 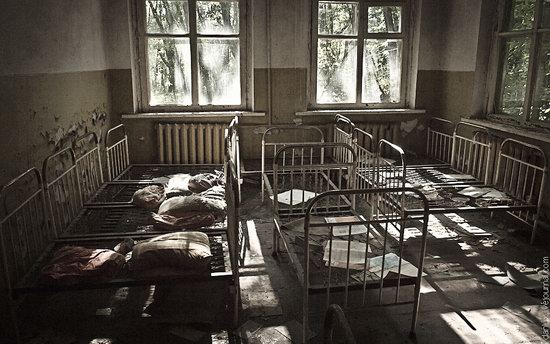 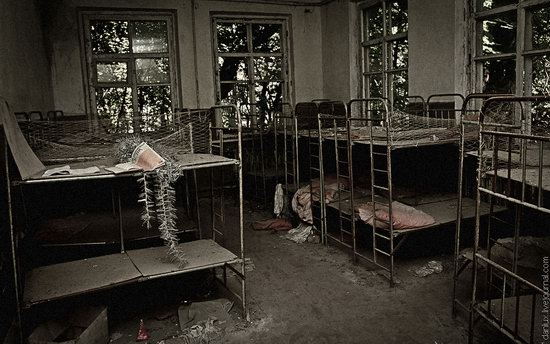 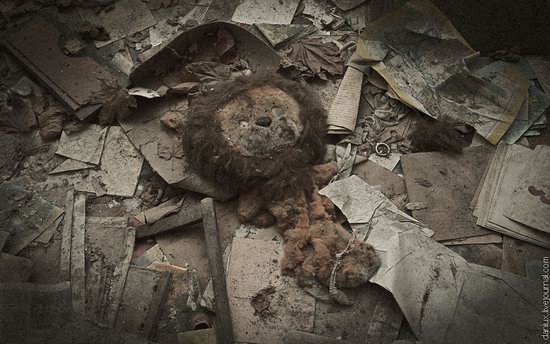 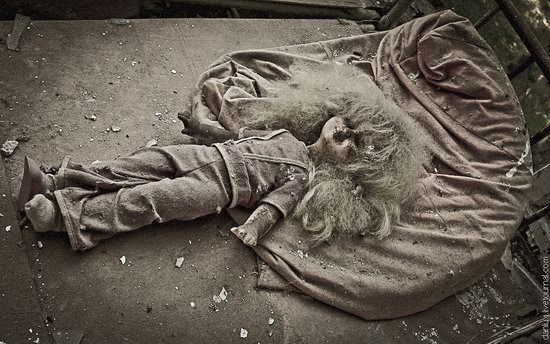 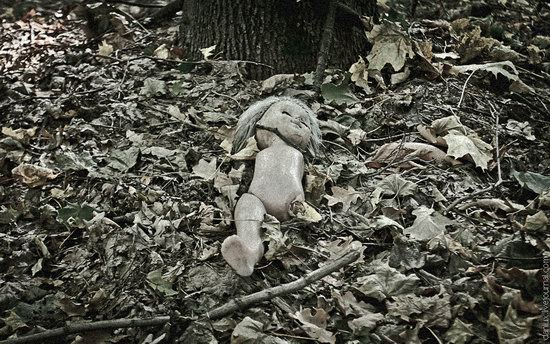 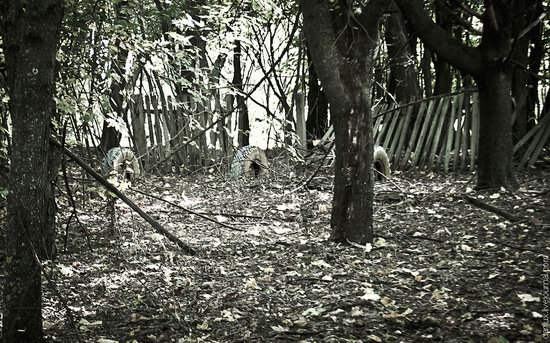 « When the West became wired – over 155 years ago, the first transcontinental telegraph was completed …
Wiley Post: The one-eyed pilot the first to fly solo around the world & developed the first pressure suits »