Top 18 of the greatest actors of Hollywood’s Golden Age

Needless to say, the modern era Hollywood has its fair share of extremely talented and “Greek God” looking actors. However, there is something about the Hollywood Golden Era and its plethora of  iconic actors that is beyond words.

These actors rose up to fame in Hollywood’s best years and had set t up the criteria for classic actors.

Check out the beyond list of actors and epitomes for class, which besides making you say  ” Yowza”  will remind you of the times when actors were the main key to a high-quality movie. Noted for his athletic physique, blue eyes, and distinctive smile (which he called “The Grin”), Burt Lancaster was one of the greatest male stars of classic Hollywood cinema. After initially building his career in “tough guy” roles, Lancaster abandoned his all-American image in the late 1950s in favor of more complex and challenging parts, and came to be regarded as one of the best motion picture actors in history. Dubbed  as “The King of Hollywood” or just simply as “The King”.Gable began his career as a stage actor and appeared as an extra in silent films between 1924 and 1926, and progressed to supporting roles with a few films for MGM in 1931. The next year he landed his first leading Hollywood role and became a leading man in more than 60 motion pictures over the next three decades. Publicity still of James Dean for the film Rebel Without a Cause.Source

James Dean is a cultural icon of teenage disillusionment and social estrangement, as expressed in the title of his most celebrated film, Rebel Without a Cause (1955), in which he starred as troubled teenager Jim Stark. The other two roles that defined his stardom were loner Cal Trask in East of Eden (1955) and surly ranch hand Jett Rink in Giant (1956). Dean’s enduring fame and popularity rest on his performances in only these three films.

Dean’s premature death in a car crash cemented his legendary status. He became the first actor to receive a posthumous Academy Award nomination for Best Actor, and remains the only actor to have had two posthumous acting nominations. In 1999, the American Film Institute ranked him the 18th best male movie star of Golden Age Hollywood in AFI’s 100 Years…100 Stars list. Jimmy Stewart starred in many films that are considered to be classics, and is known for portraying an American middle-class man struggling with a crisis.

Stewart was nominated for five Academy Awards, winning one in competition for The Philadelphia Story (1940) and receiving one Lifetime Achievement award. Stewart was named the third greatest male screen legend of the Golden Age Hollywood by the American Film Institute.He was a major Metro-Goldwyn-Mayer contract star. He also had a noted military career and was a World War II and Vietnam War veteran, who rose to the rank of Brigadier General in the United States Air Force Reserve. Cassavetes was a pioneer of American independent film, by writing and directing over a dozen movies, which he partially self-financed, and pioneered the use of improvisation and a realistic cinéma vérité style. He also acted in many Hollywood films, notably Rosemary’s Baby (1968) and The Dirty Dozen(1967). He studied acting with Don Richardson, using an acting technique based on muscle memory.His children Nick Cassavetes, Zoe Cassavetes and Xan Cassavetes are also filmmakers. An enduring American icon, for several generations of Americans,John Wayne epitomized rugged masculinity and is famous for his demeanor, including his distinctive calm voice, walk, and height.Wayne’s career took off in 1939, with John Ford’s Stagecoach making him an instant mainstream star. Wayne went on to star in 142 pictures. Biographer Ronald Davis says: “John Wayne personified for millions the nation’s frontier heritage. Eighty-three of his movies were Westerns, and in them he played cowboys, cavalrymen, and unconquerable loners extracted from the Republic’s central creation myth. After an impoverished childhood with immigrant parents and six sisters, Kirk Douglas (born Issur Danielovitch) had his film debut in The Strange Love of Martha Ivers (1946) with Barbara Stanwyck. Douglas soon developed into a leading box-office star throughout the 1950s and 1960s, known for serious dramas, including westerns and war movies. During a sixty-year acting career, he has appeared in over 90 movies, and in 1960 was responsible for helping to end the Hollywood blacklist.

In 1949, after a lead role as an unscrupulous boxing hero in Champion, for which he was nominated as Best Actor, Douglas became a star. His style of acting relied on expressing great concentration, realism, and powerful emotions, and he subsequently gravitated toward roles requiring strong characters. Among his early films were Young Man with a Horn, playing opposite Lauren Bacall (1950), Billy Wilder’s controversial Ace in the Hole (1951), and Detective Story (1951). He received a second Oscar nomination for his dramatic role in The Bad and the Beautiful (1952), where he played opposite Lana Turner. And his powerful acting as Vincent van Gogh in Lust for Life (1956) is considered one of his finest roles. He, along with Olivia de Havilland, are of the last living actors from the Golden Age of Hollywood. Olivier’s honours included a knighthood (1947), a life peerage (1970) and the Order of Merit (1981). For his on-screen work he received four Academy Awards, two British Academy Film Awards, five Emmy Awards and threeGolden Globe Awards. The National Theatre’s largest auditorium is named in his honour, and he is commemorated in the Laurence Olivier Awards, given annually by the Society of London Theatre. He was married three times, to the actresses Jill Esmond from 1930 to 1940, Vivien Leigh from 1940 to 1960, and Joan Plowright from 1961 until his death. 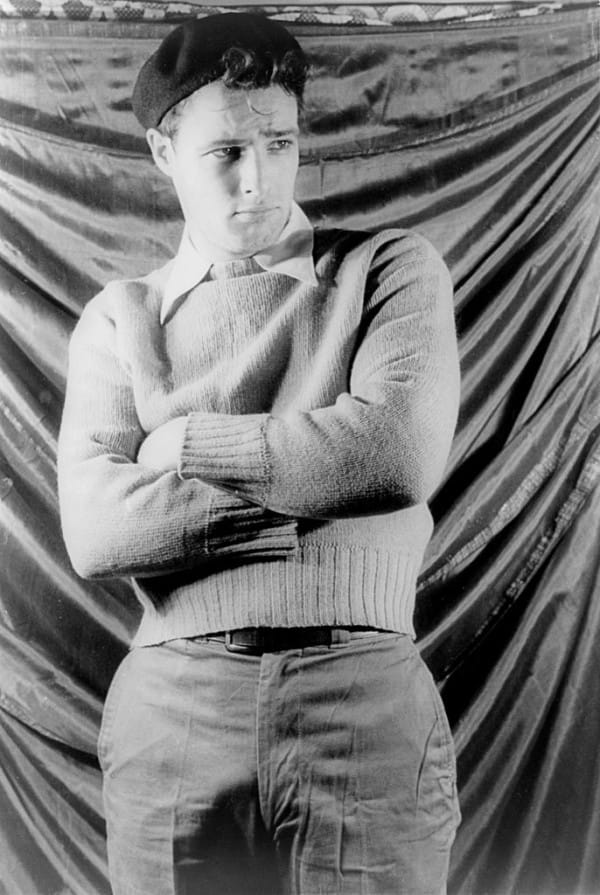 Brando was one of only three professional actors, along withCharlie Chaplin and Marilyn Monroe, named in 1999 by Time magazine as one of its 100 Most Important People of the Century.  A cultural icon, Brando is most famous for hisAcademy Award-winning performances as Terry Malloy in On the Waterfront (1954) and Vito Corleone in The Godfather (1972), as well as influential performances in A Streetcar Named Desire (1951), Viva Zapata!(1952), Julius Caesar (1953), The Wild One (1953), Reflections in a Golden Eye (1967), Last Tango in Paris (1972), and Apocalypse Now (1979). Brando was also an activist, supporting many causes, notably the African-American Civil Rights Movement and various American Indian Movements. Along with Marlon Brando and James Dean, Clift was one of the original method actors in Hollywood; he was one of the first actors to be invited to study in the Actors Studio with Lee Strasberg, Michael Chekhov and Stella Adler. He also executed a rare move by not signing a contract after arriving in Hollywood, only doing so after his first two films were a success—”a power differential that would go on to structure the star-studio relationship for the next 40 years. He often played outsiders and “victim-heroes”, such as the social climber in George Stevens’s A Place in the Sun, the anguished Catholic priest in Alfred Hitchcock’s I Confess, the doomed soldier in Fred Zinnemann’s From Here to Eternity, and the would-be deserted soldier in Edward Dmytryk’s The Young Lions. Paul Leonard Newman was an American actor, film director, entrepreneur, professional racing driver and team owner; he was also an environmentalist, activist, and philanthropist. He won numerous awards, including an Academy Award for his performance in the 1986 film The Color of Money, a BAFTA Award, a Screen Actors Guild Award, a Cannes Film Festival Award, anEmmy Award, and many honorary awards. Despite being colorblind, he won several national championships as a driver in Sports Car Club of America road racing, and his race teams won several championships in open wheel IndyCar racing.

Newman was married to actress Joanne Woodward from 1958 until his death. He was a co-founder of Newman’s Own, a food company from which Newman donated all post-tax profits and royalties to charity. As of 31 December 2014, these donations totaled US$429.3 million He achieved international recognition playing T. E. Lawrence in Lawrence of Arabia (1962) for which he received his first Academy Award nomination. He received seven further Oscar nominations – for Becket (1964),The Lion in Winter (1968), Goodbye, Mr. Chips (1969), The Ruling Class (1972), The Stunt Man (1980), My Favorite Year (1982) and Venus (2006) – and holds the record for the most Academy Award acting nominations without a win. He won four Golden Globes, a BAFTA and an Emmy, and was the recipient of a Honorary Academy Award in 2002. Establishing himself as a formidable Shakespearean actor in the 1950s, with a memorable performance of Hamlet in 1964, Burton was called “the natural successor to Olivier” by critic and dramaturg Kenneth Tynan. An alcoholic, Burton’s failure to live up to those expectations disappointed critics and colleagues and fueled his legend as a great thespian wastrel.

Burton was nominated seven times for an Academy Award without ever winning. He was a recipient of BAFTA, Golden Globe and Tony Awards for Best Actor. In the mid-1960s Burton ascended into the ranks of the top box office stars, and by the late 1960s was one of the highest-paid actors in the world, receiving fees of $1 million or more plus a share of the gross receipts.

Redford made his film debut in War Hunt (1962). His role in Inside Daisy Clover (1965) won him a Golden Globe for best new star. He starred in Butch Cassidy and the Sundance Kid (1969), which was a huge success.

In April 2014, Time magazine included Redford in its annual TIME 100 as one of the “Most Influential People in the World”, declaring him the “Godfather of Indie Film”. An early pop icon, a sex symbol of the 1920s, he was known as the “Latin Lover” or simply as “Valentino”. Starred in several well-known silent films including The Four Horsemen of the Apocalypse, The Sheik, Blood and Sand, The Eagle, and The Son of the SheikHe had applied for American citizenship shortly before his death,  which occurred at age 31, causing mass hysteria among his female fans and further propelling him into iconic status.

« Henry Ford Museum And Greenfield Village -The largest indoor-outdoor museum complex in America
Train Travel in the 1800s – These photos will take you inside the Rococo period Pullman train car. … »