There might not be a more beloved symbol of Christmas than the world’s favorite Christmas carol, “Silent Night,” or as the original title in German goes, “Stille Nacht.” The lyrics for this song found their place onto a piece of paper as early as 1816, thanks to an assistant preacher named Joseph Mohr in a little village known as Mariapfarr, in what would nowadays be Austria. At least that’s what historical documents, discovered in the mid-1990s and penned personally by Mohr, say.

From Mariapfarr, the preacher then moved to another small village, this one in the vicinity of the Austrian city of Salzburg, the village being known as Oberndorf and sitting very close to the German border today. What more records suggest is that Mohr was a person who deeply cared about the community, and getting in touch with different people is what possibly inspired him to write “Silent Night.”

In Oberndorf, he had met the school teacher of the village and also an organist named Franz Xavier Gruber. Shortly before Christmas Eve, the pair had decided to play some songs in the local church when they realized the organ was broken, supposedly damaged by mice, but they still ushered in “Silent Night’s” very first performance. 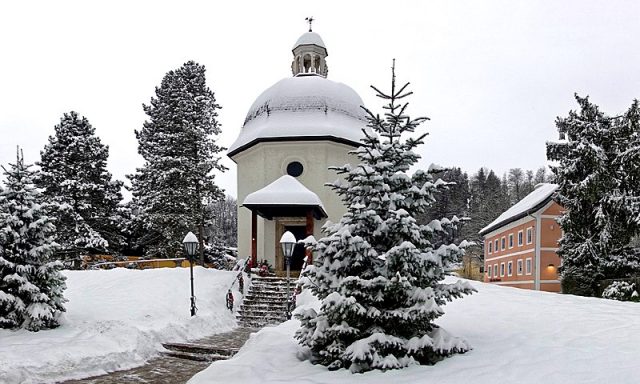 Another anecdote tells of Mohr’s visiting a family whose baby has been in poor health, and as the story goes, he had been astonished by the peace which prevailed in the family, despite the sick infant. Which was possibly another reason why Mohr wanted to have some music for the Christmas service, and what prompted him to give the “Silent Night” verses to Gruber. 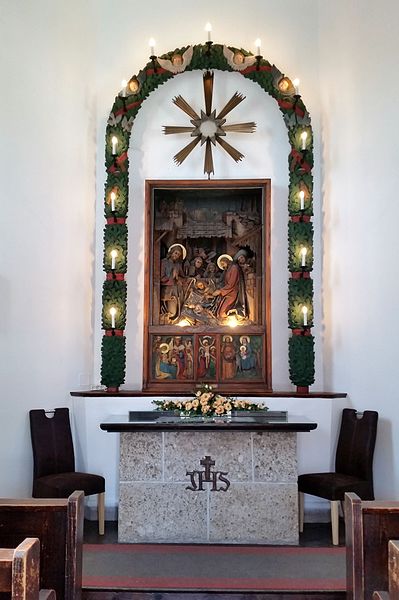 Inside the Silent Night chapel in Oberndorf, Austria. Photo by Michael Burgholzer CC by 4.0

A note written years later recaptures the events: “It was on December 24, 1818 that the then-assistant priest Mr. Josef Mohr at the newly established St. Nicolas parish in Oberndorf handed a poem over to substitute organist Franz Gruber, requesting a fitting melody for two solo voices without choir but with guitar accompaniment.”

That is how the song was delivered to the world for the very first time, with Mohr and Gruber singing together and accompanied only with a guitar. What happened with the song after the 1818 Christmas Eve is not 100 percent clear. Several stories try to trace the history of the carol from that moment on, and one of them says that the carol was almost lost, forgotten for at least five to six years. 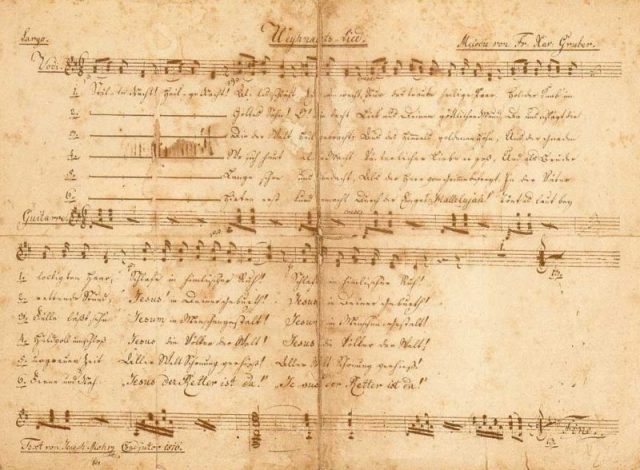 After which, the legend goes that it was an organ maker in 1825, repairing the organ in the Oberndorf church, who supposedly found a sheet of paper in the church where the music for “Silent Night” stood inscribed. The organ maker then took the sheet to his home in Tyrol.

However, that version is contradicting an account which says that “Silent Night” was already performed in Tyrol in 1822, namely for notables such as Emperor Franz I of Austria as well as Czar Alexander I of Russia. According to this version, the carol was at this point a popular folk song that was performed across Tyrol.

In the U.S. the first singing of “Silent Night” is traced to as early as 1839, though in the beginning, the verses were sung in German. It wouldn’t be until 1859 that the English version, widely known now, came into existence following an adaptation made by John Freeman Young, a New York Episcopal priest.

Of course, as time passed by, the melody as well as the lyrics of “Silent Night” had evolved and undergone some alterations. Not to mention the countless versions that were recorded in pop culture, especially since the beginning of the 20th century.

Bing Crosby’s version of the carol was set to break all single selling records of the time after it was released in 1935. Many more performers would come up with their own twist on the carol, such as Simon and Garfunkel in 1966, the Temptations in 1970, or Al Green in 1983. No matter who did the song, people would always tune to it, all the more reasons why UNESCO, in 2011, has had this song designated as part of our “intangible cultural heritage.”

Aside from that, let’s still not forget that the original “Silent Night” was written in times of great strife and troubles. Mohr came up with it only a year after the Napoleonic wars that changed the face of Europe, as well as the fact that 1816 was “the year without a summer,” leaving devastating consequences for Europe such as floods, failure of the crops, and food riots.

« Locals believed that the Angkor Wat temple was constructed in a single night by a divine architect
In 1620s Rome, the best parties by far were thrown at the Villa Borghese »