An ancient Roman ring likely inspired J. R. R. Tolkien to create the Ring of Power, also known as One Ring, at the center of his beloved epic saga, The Lord of the Rings, and its prequel, The Hobbit.

Forged by the Dark Lord Sauron to enslave inhabitants of Middle Earth, the One Ring can make you invisible, as any Ring follower can tell you. It causes separation anxiety. It saps your energy, and turns good people bad. Its evil power is so formidable that wise counselors like Gandalf refuse even to try it on.

The ring shows up early in The Hobbit, when Bilbo Baggins finds something special amid the “few wretched oddments” in Gollum’s cave: “One very beautiful thing, very beautiful, very wonderful. He had a ring, a golden ring, a precious ring.”

Before he became the father of high fantasy, Tolkien was a renowned professor of Anglo-Saxon at Oxford, when he was called upon to comment on an ancient ring and other relics.

John Ronald Reuel Tolkien was born in South Africa in 1892. He moved with his mother and brother to England at age 3, but his father died before he could join the family. His mother moved in with her parents, and home-schooled young Ronald, as he was called. He could read and write fluently by age 4, and became especially proficient in botany and Latin, both interests that fueled his later novel-writing. A gold ring had been found in 1785 by a farmer plowing a field in Silchester, a village west of London most notable for the archaeological site of a town occupied there during the Roman Invasion of 45 A.D. and abandoned in the 7th century.

The ring was remarkable on several fronts: Fashioned out of 12 grams of gold, it was so large, with a diameter of 25 millimeters, that it would fit only on a thumb or over a gloved finger. It was ornamented with the head of Venus wearing a diadem. A Latin inscription read “Senicianus” and “Live Well in God.” 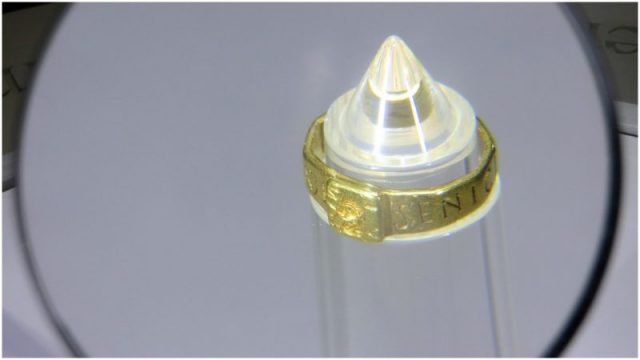 The farmer likely sold the ring to the wealthy Chute family, who resided at the Vyne, a 16th-century Tudor palace near Basingstoke, and today a National Heritage Site. A few decades later and some 100 miles away, a “curse tablet” was found at a Roman site in Lydney in Gloucestershire, locally known as Dwarf’s Hill.

On the stone tablet was inscribed: “To the god Nodens. Silvianus has lost a ring … among those who bear the name of Senicianus to none grant health until he bring back the ring to the temple of Nodens.” The archaeologist Sir Mortimer Wheeler, director of excavations at Lydney, spotted the connection between the tablet and the ring. He called in his good friend Tolkien in 1929 to inspect the relics, and to comment on the curse and the odd name of the god. Did the ring, the tablet, the curse, and Dwarf’s Hill inspire the professor? One year later, Tolkien was fully immersed in writing The Hobbit, which was published in 1937. The Lord of the Rings came out in 1954. Some of the best-selling novels of all time, the saga’s film adaptations have likewise been critical and commercial smashes.

“It is particularly fascinating to see the physical evidence of the Vyne ring, with its links to Tolkien through the inscription associating it with a curse,” Dr. Lynn Forest-Hill of the Tolkien Society told the Guardian in 2013.

Related story from us: The idea of “the Ring” existed centuries before Tolkien’s epic saga

Today, Tolkien’s inspiration is on view in the Ring Room at the Vyne Manor in Basingstoke. Indeed, the fully renovated palace is a worthy stop for any book-nerd tourist, home to a treasure chest of literary history that includes a rare Chaucer manuscript and the personal libraries of such literary giants as Rudyard Kipling and George Bernard Shaw.

« Chopines: 16th century platform shoes a challenge even for the bravest fashionistas
Women workers of WWI: They were vital part of war effort, with the munitions factories especially hazardous, causing injuries and poisonings »