The sword of Joyeuse is simply awesome. When people think about legendary swords that over the course of human history achieved a mythical status, the sword wielded by King Arthur is almost certain to be among the first to come to mind. However, this sword is just one in a long list of weapons, both fictional and real, that were supposedly imbued with supernatural powers.

Many of these legendary weapons have long been an integral part of epic tales of conquests, myths, and magic, capturing the interest and imagination of people all over the world. But when talking about these legends, we must not forget to tell the story of the sword of Joyeuse: the coronation sword of the Kings of France that is reputed to have supernatural powers. It is also considered by some historians to be the sword that helped Charlemagne the Great to unite Western Europe, which earned him the title “Father of Europe.” 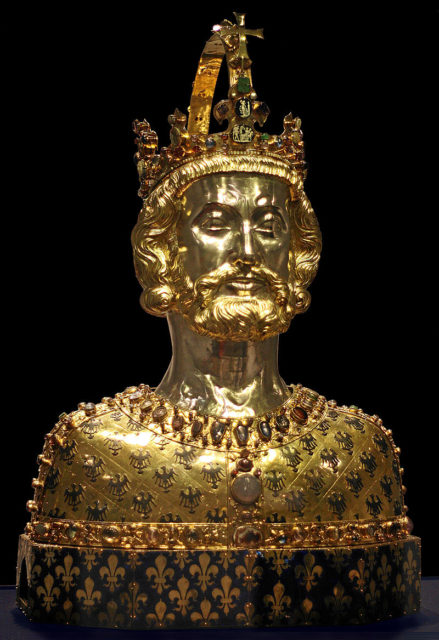 The Bust of Charlemagne.

The sword of Joyeuse, which can be seen today in the Louvre Museum, Paris, is one of the most enigmatic swords to have ever been crafted. Dubbed “La Joyeuse,” meaning “joyful” in French, this mysterious sword was forged by the legendary blacksmith Galas, who, according to popular legend, spent three years of his life completing it. Legend has it that Galas’ perfect sword was so bright that it could outshine the sun and, similarly to King Arthur’s sword Excalibur, had the ability to blind one’s enemies in battle. Additionally, it was said that it could change color 30 times a day, and the person who wielded it was believed to be impregnable to poison. 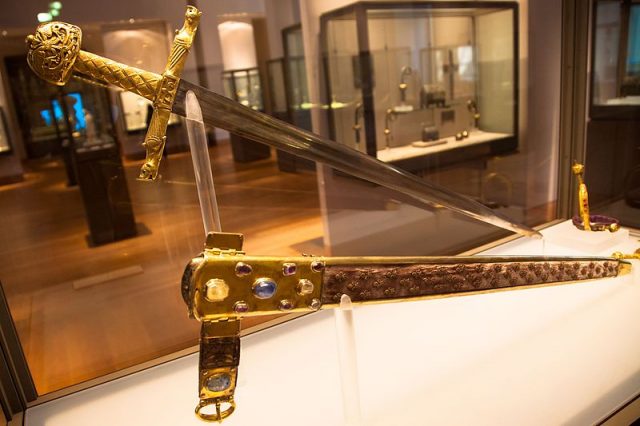 Joyeuse the French Coronation Sword of Charlemagne. Photo by Bradley Weber CC by 2.0

Joyeuse quickly earned a great reputation across the Old Continent and went on to become known as “the sword that conquered Europe.” Most historians agree that the proud owner of this legendary weapon was Emperor Charlemagne, also known as Charles the Great, who is said to have used its magical powers to unite 9th century Western Europe, which largely shaped the medieval history of the entire continent. No one knows for sure what happened to the sword after Emperor Charlemagne died in the year of 814, but one thing was clear, the reputation Charlemagne’s sword earned across Europe was becoming stronger and stronger. Admirers of the sword just added more mysticism to its story over the years.

The epic 11th-century French poem, known as “Song of Roland,” provides a description of how Emperor Charlemagne rode into battle with his famous sword:

“[Charlemagne] was wearing his fine white coat of mail and his helmet with gold-studded stones; by his side hung Joyeuse, and never was there a sword to match it; its color changed thirty times a day.” It is said that during the Battle of Roncevaux Pass, Charlemagne lost the valuable sword. According to one story, the emperor promised quite a reward for anyone who could find the sword of Joyeuse. Luckily for him, one of his soldiers managed to find the sword for which, as promised by the emperor, he was given a large portion of land as a reward.

For several centuries after the death of Charlemagne, the existence of the sword of Joyeuse was somewhat shrouded in mystery, but then, according to various historical accounts, it was used at Philip the Bold’s coronation that took place in 1270. The medieval sword witnessed the coronation of many future kings of France; it was last used at the coronation of Charles X in 1825.

Related story from us: Some of the most legendary swords of all time

To this day, no one can claim for sure whether the mysterious artifact that now resides at the Louvre is Charlemagne’s sword or not. What is for certain is that it still remains a symbol of great power, a witness of legendary conquests, and most importantly, one of the most famous swords in history.

« Mysteries surround a 16th century text on magic connected to John Dee that legend says carries a curse
A broke, widowed school teacher hoped to earn fame and fortune in 1901 by going over Niagara Falls in a barrel—at age 63 »