Conrad Schumann holds a special place in Cold War and photographic history. August 13, 1961, will forever be remembered in Germany as Barbed Wire Sunday, for that was the day when a wire was stretched across the city, marking the beginning of the construction of the Berlin Wall. The barrier that would become the physical symbol of the East-West divide during the Cold War had just appeared and the citizens of East Berlin were already feeling the isolation that would continue until 1989.

Prior to the building of this physical obstacle, hundreds of thousands of German Democratic Republic citizens emigrated to the neighboring Federal Republic of Germany, where they decided to stay. After World War II, East Germany became a real hotbed for the spy proxy war between the U.S. and the U.S.S.R., so the official explanation of the decision to build the wall was as a protection from foreign agents. But many saw this explanation as an excuse for another priority―an attempt to reduce and prevent further migration to Western countries.

In the turmoil that followed during the construction of the wall, one police officer would enter history with his iconic leap to freedom just two days after the concertina wire fence was set up. His name was Conrad Schumann, and he was 19 years old when he decided to walk over to the western side of the wire before the path was closed for good. Born in Zschochau, Saxony, in the midst of World War II, Schumann grew up witnessing the growing tension that threatened to lead the world into yet another global conflict. Following his 18th birthday, he enlisted in the East German riot police department called the Volkspolizei-Bereitschaft. 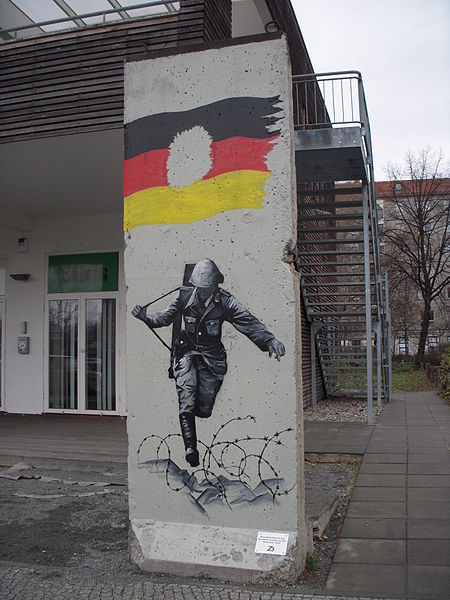 Conrad Schumann’s escape to the West as a decorated part of the Berlin Wall on Gertrud-Kolmar-Strasse in Berlin. December 12, 2011. Photo by BKP CC by SA-3.0

After finishing basic training in Dresden, he was sent to Potsdam, from where he requested a transfer to Berlin. Part of his duties there included guarding the Berlin Wall construction site. He was posted on the corner of Ruppiner Straße and Bernauer Straße on August 15, 1961.

At one point, West Berlin citizens started calling out to him to cross the wire. Soon several of them assembled and shouted: “Komm rüber!” (Come over) A West German police car pulled over, signaling to Schumann to cross the wire and enter the vehicle. What followed was recorded by West Berlin-based Peter Leibing, who took the iconic image of Schumann balancing on the concertina wire while dropping his Soviet-made PPSh-41 submachine gun.

A 16 mm film recording was also made, capturing the entire string of events before, during, and after Conrad Schumann crossed the demarcation line which cut Berlin in half. After he defected, he was allowed to migrate into West German territory. He moved to Bavaria, where he met his future wife, Kunigunde, and the two married in 1962, settling in the town of Günzburg. He was still living in Günzburg with his wife and son when the Wall finally fell. He stated concerning the event: “Only since 9 November 1989 [the date of the fall] have I felt truly free.” He continued to live in Bavaria because he found it too difficult emotionally to return to his hometown. Former colleagues had denounced him and were very hostile toward him and his decision. He was also hesitant to visit his parents and siblings after the Wall fell due to the fact that he felt unwelcome, despite the fact that the Cold War was officially over. Suffering from depression, he committed suicide on June 20, 1998, by hanging himself in his orchard.

Related story from us:Mengenlehreuhr: the Berlin Clock that shows time with the help of light signals and a mathematical theory

A few hours later his wife discovered the body. It was the end of an era.

In 2011, the image of Schumann’s jump was included in the UNESCO Memory of the World program, dedicated to the Berlin Wall. The photograph has become an inspiration for numerous art projects, sculptures, and even souvenirs.

« Magnificent Men: Everyday Heroes of the RAF in Colour
San Colombano hermitage: Carved into a cliff in northern Italy, it is named after a saint who killed a dragon »