Rare, Gorgeous Photos of Ancient Trees Around the Globe

Ancient trees cling to life against the odds and against the elements. They tower over us, tall and straight, or scrape and bow, massively twisting back to the earth in slow decline. Something about them stirs people to their core.

Beth Moon has made it her life’s work to document the most magnificent of these survivors of time and nature. She has traveled the globe for 14 years, seeking out and photographing the oldest and rarest of them. 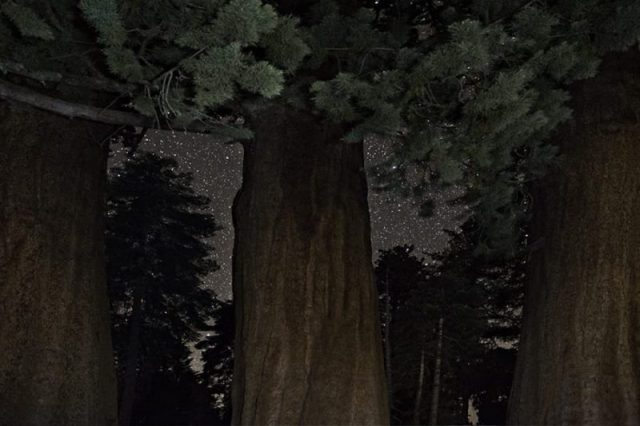 Her pictures, collected into two books, are the next best thing to seeing the trees in person. In some cases, her stunning specialty prints may even be better. They are made with a labor-intensive duotone platinum and palladium process that yields otherworldly results. The pictures have an intense tonality and seem to glow with a light of their own. 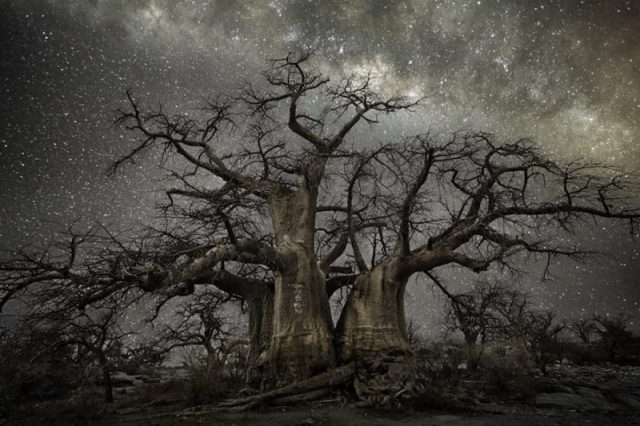 Moon is Wisconsin-born. It was there her father instilled in her a love of nature, sharing with her the names of plants and animals that populated the landscape. Later, she studied fine arts at the University of Wisconsin.

Her photographic eye was honed by classes in painting, live drawing, design and sculpture. She moved to England, where she noticed the Brits embraced their rare old trees like old friends. Whole societies were dedicated to identifying and protecting the venerable yews in the British landscape. 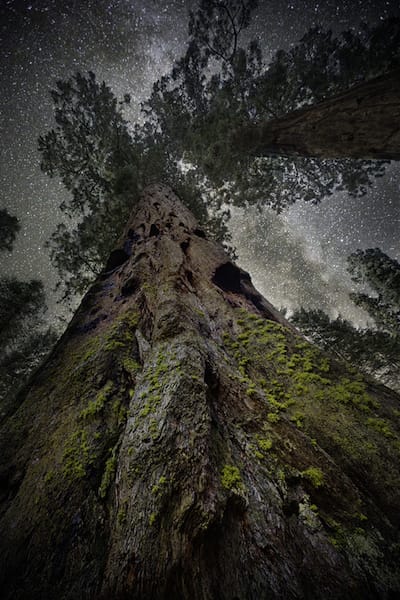 It was these ancient trees that inspired her to start photographing. Smitten, she began expanding her scope.

Since then, Moon’s work has taken her to some of the most remote places on the planet, including the interiors of South Africa, Europe, the Middle East and Madagascar. 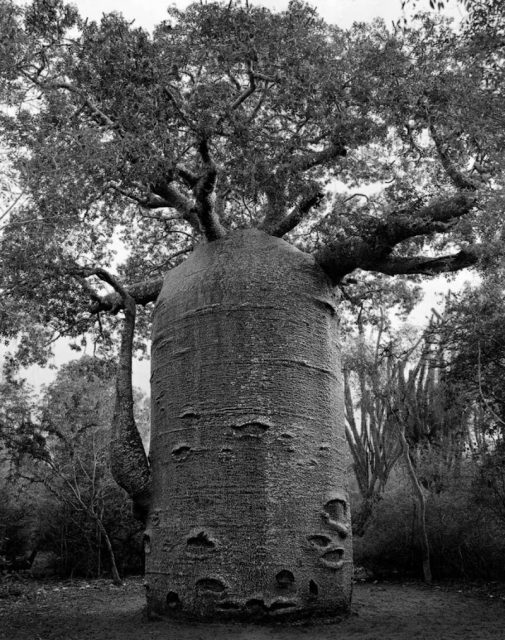 Her work was no hit-and-run job. She did painstaking research to not only find the biggest and oldest of these trees, but the often incredible stories behind them. 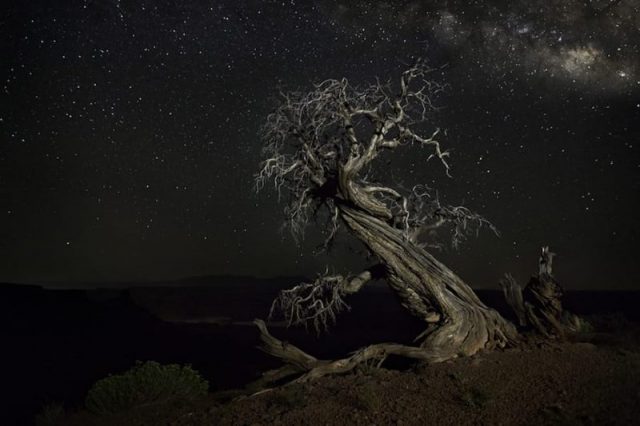 Her sources are history books, newspapers, tree registers and oral histories passed down through communities. 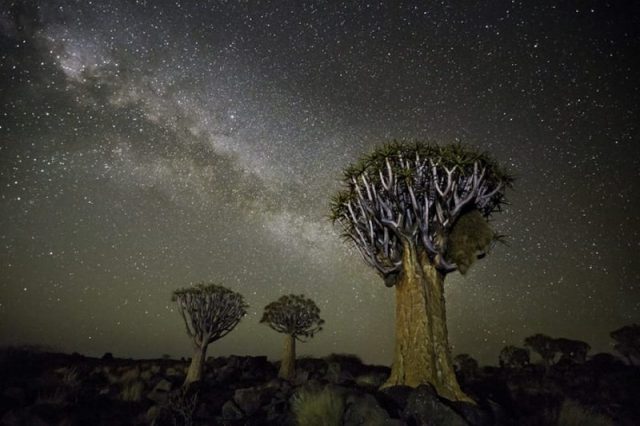 In Great Britain, she found the Whittinghame Yew, a gnarled old tree under which a Scottish nobleman’s demise was planned. It is also the home of the Major Oak, where Robin Hood and his Merry Men were said to gather. In Cambodia, she found the latticed roots of a massive strangler fig clamped down around temple ruins. 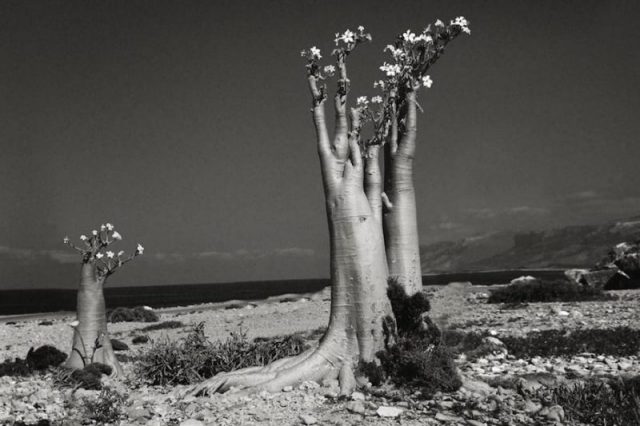 Many of the trees are centuries old. A few are four- or five-thousand years old. Moon has learned patience from the trees. Once on site, she spends time studying them to decide on the best shot. Sometimes, just getting to a site takes patience. 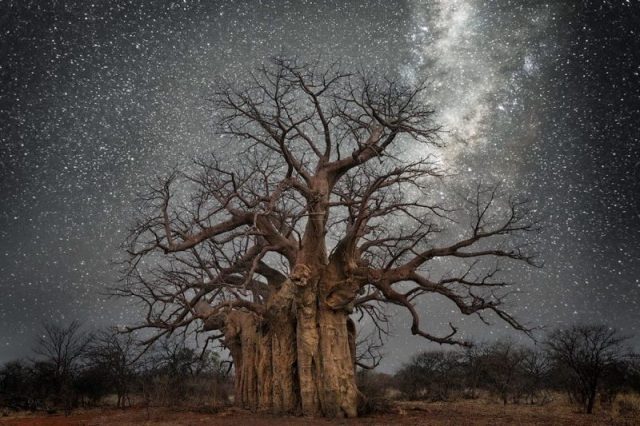 One case is a bit more extreme than others: It took her three years to get into Yemen-controlled land to photograph the giant dragon’s blood tree growing near the horn of Africa. 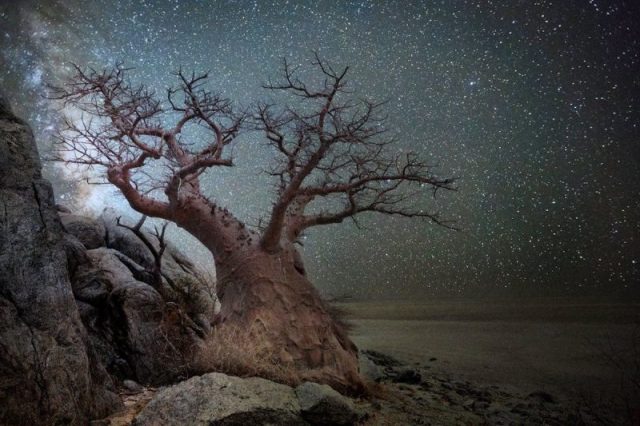 Sometimes she hires locals to find what she is looking for. While in Madagascar to shoot the unusual baobab trees, setting out by jeep with her guide, a whole village trailed them like a comet running behind. 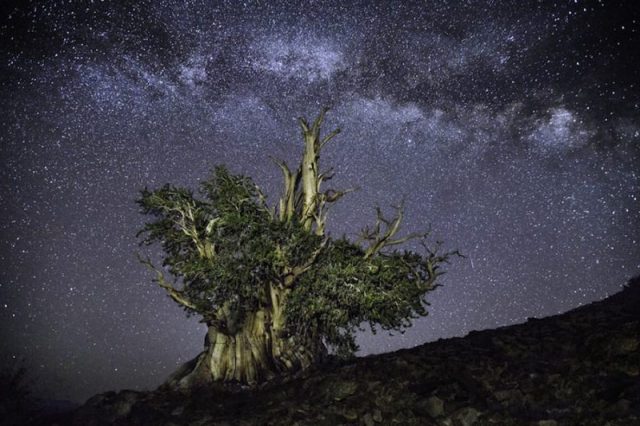 The first of her two books was Ancient Trees: Portraits of Time. The second, done with slow exposures under night skies, is the dazzling Ancient Skies, Ancient Trees. In her own artistic statement, Moon talks about the meaning she finds in her work: “Standing as the earth’s largest and oldest living monuments, I believe these symbolic trees will take on a greater significance, especially at a time when our focus is finding better ways to live with the environment.”

Read another story from us: Buttington Oak: Planted to mark a Viking defeat in 893 collapses after 1,000 years

Her work on Portraits of Time even got a nod from noted anthropologist Jane Goodall: “Beth Moon’s stunning images capture the power and mystery of the world’s remaining ancient trees. These hoary forest sentinels are among the oldest living things on the planet and it is desperately important that we do all in our power to ensure their survival. I want my grandchildren – and theirs – to know the wonder of such trees in life and not only from photographs of things long gone. Beth’s portraits will surely inspire many to help those working to save these magnificent trees.”