Why are Grumps called ‘Party Poopers’?

English is full of odd turns of phrase. There are any number of expressions that we all understand the meanings of, but how did we get them?

They must have come from somewhere, right? What are the origins of some of our more colorful phrases?

This is clearly an unusual phrase, but according to Michigan Radio, it’s been around for decades.

According to the station’s weekly segment discussing the evolution of language, the phrase party pooper first started showing up among college students in the 1940s and has a similar meaning to phrases like wet blanket or wallflower.

The exact origin is unknown, but there are three solid possible options. 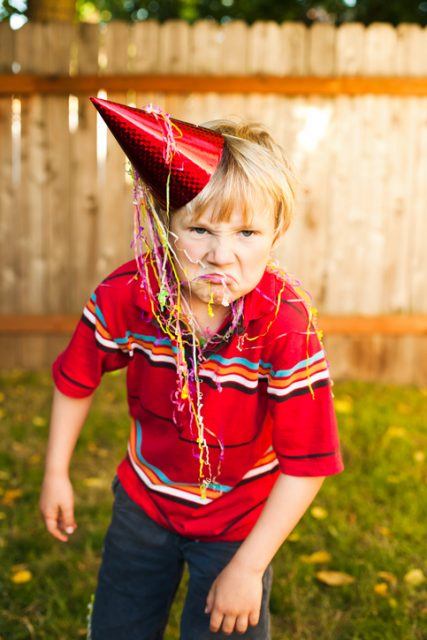 One of those options comes from using the verb “to poop” as into tire or exhaust – “I’m pooped.” Another option is that it may have come from the idea of “pooh-pooh”-ing something, which is to blow something off or treat it with disdain. The final possibility is, of course, the one involving the use of “poop” in the way that refers to bodily functions.

The word “party” has also shifted meanings over the centuries since it entered the English language. Its original meaning was a division of a whole, or a part of something. It’s not until the early 1700s that “party” refers to a social event.

Grammarly also offers some insight into the origins of various phrases. Some of them include:

This phrase probably originates in the Colonial Era, when early Americans required their servants to rub their wood floors “the right way.”

Failing to rub newly cleaned floors with dry fabric after the floor had been wet was “the wrong way” and resulted in the floors streaking and eventually being ruined, annoying the homeowner.

Another possibility refers to rubbing a cat’s fur against the direction it grows (the wrong way), which would annoy the cat. In either case, the use of this phrase to refer to annoyance is very clear.

Don’t throw the baby out with the bathwater

In the 1500s, indoor plumbing was just a dream. The frequency of bathing varied widely, with some people only having a tub bath about once a year. Because of the enormous amount of work involved in preparing a bathtub and then emptying it, the tub would be filled once, and the entire household would use the water before it was emptied and the tub was put away.

The men would bathe first, followed by the women, then the children of the house, and the babies would be washed last of all. It’s not hard to imagine what the state of the water would have been like at the end of the process, so mothers really did have to take extra care that the baby had been fished out of the murk before the water was tossed out.

Mad as a hatter

Although this phrase may have been popularized by Lewis Caroll’s Alice in Wonderland, it didn’t begin there.

In the 17th and 18th centuries, hatters used to use mercury as part of making hat felt.

According to phrases.org, over the years, people who made hats were slowly poisoned by mercury exposure, causing trembling and behavioral issues such as aggressiveness and mood swings, all of which together could make a person appear “mad” or insane. 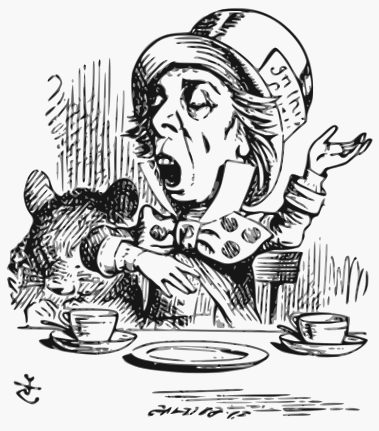 This is one theory of the phrase’s origin, and although it fits the symptoms of mercury poisoning, the millinery connection is entirely circumstantial.

The first known printed use of the phrase appeared in 1829 in a fictional conversation between characters in a piece from Blackwood’s Edinburgh Magazine and appeared a couple of times fairly shortly after that. 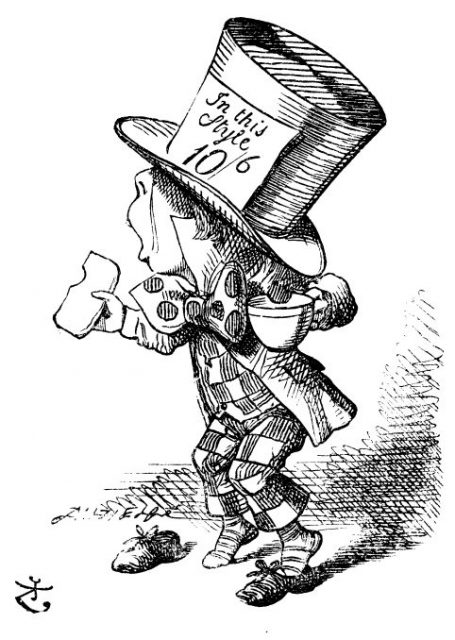 The Hatter enjoying a cup of tea and bread-and-butter, by Sir John Tenniel.

There’s nothing in the text that suggests the phrase’s derivation, though, including any mention of hats or mercury.

The site also suggests that the original phrase may have been “mad as an adder,” but can’t offer any citation dating from earlier than the 1829 reference.

A chip on someone’s shoulder

Again, according to phrases.org, there are a couple of possible origins for this phrase.

In this phrase, the word “chip” refers to a small piece of wood and one source for the phrase may be the 19th-century practice of showing you want a fight by putting a piece of wood on your shoulder in hopes that someone will knock it off. 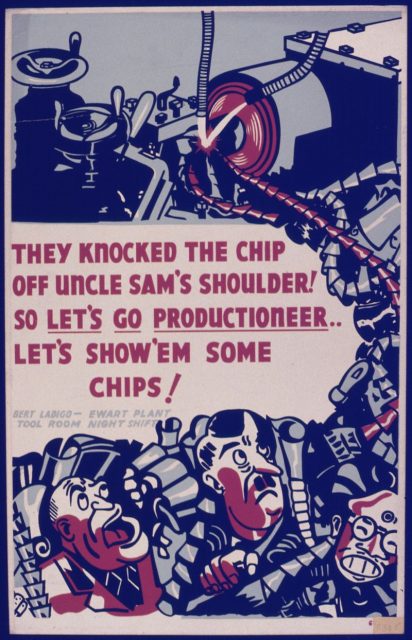 An American wartime poster alluding to the expression.

Alternatively, and perhaps more sensibly, there is the idea that the phrase comes from the working customs of the British Royal Dockyards in the 18th century.

In a 1999 book on the practices and labor relations of the dockyards, the authors detail a standing order of the Navy Board, which says “Shipwrights to be allowed to bring [chips] on their shoulders near to the dock gates, there to be inspected by officers.”

The ability to bring home extra wood for fires or building material was a nice bonus for dock workers. Another order, in May of 1753, ruled that workers could only take away chips that could be carried under one arm, which limited what workers could take away.

Read another story from us: The Harrowing True Story Behind the “Dingo Ate My Baby” Saying

These are just a few examples of how particular idioms or phrases can enter a language. Language is a living thing, and is constantly evolving as people coin new words or phrases to suit their circumstances. How many current popular words or expressions may still be part of the language in 100 years or quietly fade back into obscurity? Only time will tell.