About 9,000 years ago in what is now Turkey, Neolithic people lived in such an overcrowded city that they had to climb into the homes through the roofs. Violence among them followed.

Archaeologists in the famous excavation site of the overcrowded Neolithic city Çatalhöyük in southern Turkey say this was one of the earliest known cities in the world. Researchers also found evidence of damaged heads and projectiles, writing that there was a “compelling record of elevated levels of interpersonal violence” that increased as the number of people in the community did. 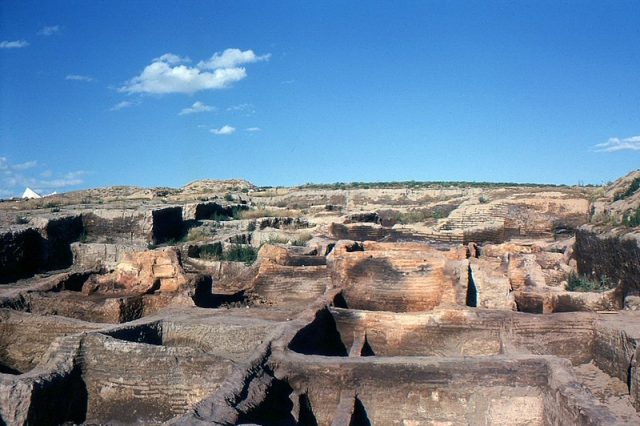 About one in every four skulls examined by researchers was hit by a small projectile, which they believe were small clay balls – also found on site – flung by slingshots. Many victims were women, with evidence showing most had been bashed in the head from the rear.

Archaeologists recently discovered that the transition from foraging to a communal farming lifestyle caused problems for people who lived at a 32-acre site in southern Turkey that was occupied from 7100 B.C. to 5950 B.C. Çatalhöyük was home to as many as 8,000 people at its peak. 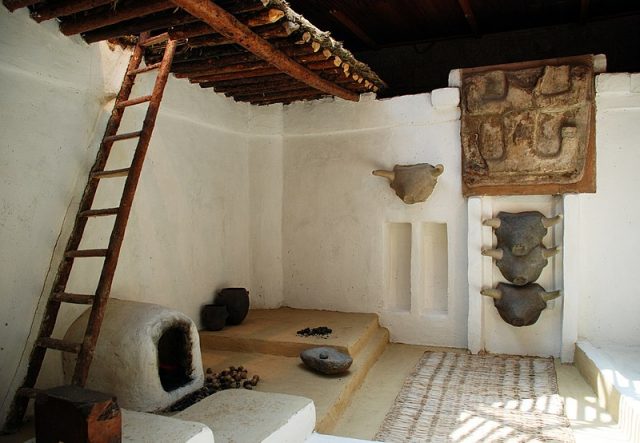 According to Live Science, archaeologists compiled 25 years of data gathered from the remains of 742 individuals. In the preserved evidence of over 1,000 years of Neolithic life, the scientists discovered “a compelling record of elevated levels of interpersonal violence” triggered by the stress of city living. In order to accommodate thousands of people, homes were constructed so close together that residents had to enter by first climbing a ladder to the building’s roof and slipping inside. 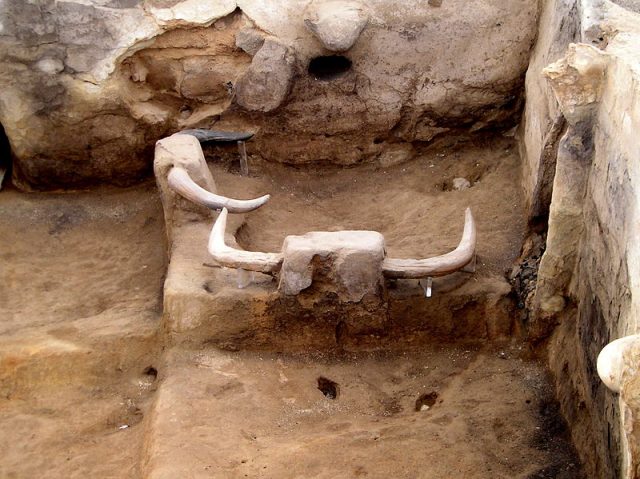 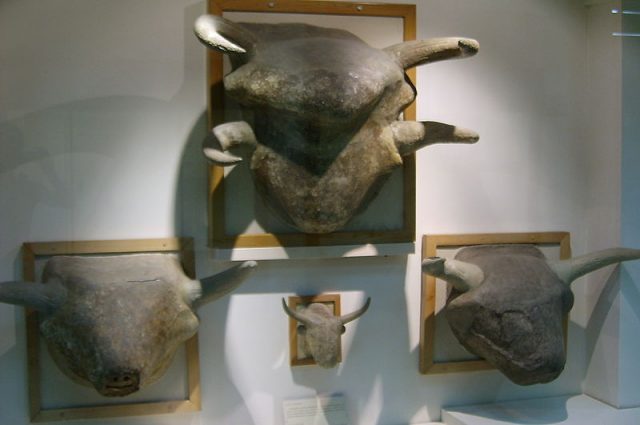 “The scientists found that the number of injuries, evident in skeletons, increased when the community was at its largest, suggesting that as Çatalhöyük’s population boomed, violence became more frequent,” said Live Science. “About 25 percent of the 95 examined skulls showed healed injuries made by small spherical projectiles, probably a clay ball flung by a slingshot. Many of these clay spheres were also preserved around the site, according to the study.” 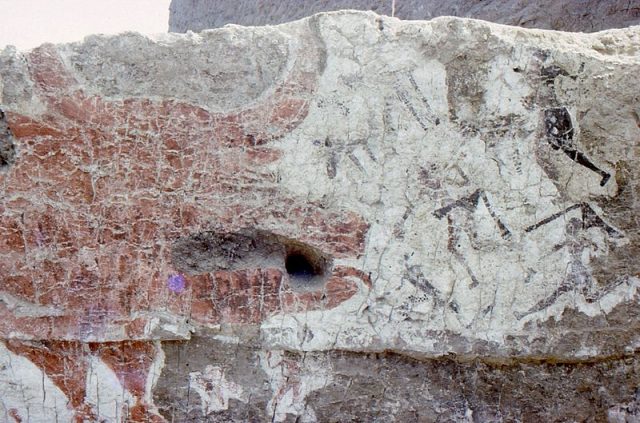 When Çatalhöyük was most crowded, disease was rampant. Around 33 percent of the skeletons showing signs that hinted at bacterial infection. During that same period, approximately 13 percent of the women’s teeth and 10 percent of the men’s teeth were filled with cavities — the result of a diet rich in grains. 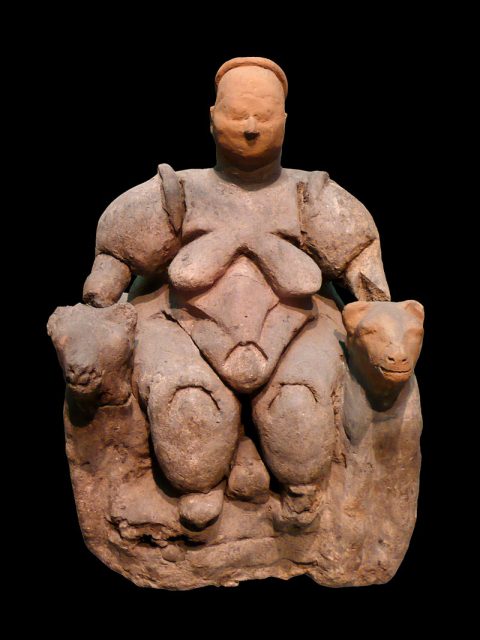 Lead study author Clark Spencer Larsen, a professor of anthropology at Ohio State University, said interior walls and floors of dwellings bore the residue of human and animal feces, which could also have made people sick.

“They are living in very crowded conditions, with trash pits and animal pens right next to some of their homes,” Larsen said. “So there is a whole host of sanitation issues that could contribute to the spread of infectious diseases.” 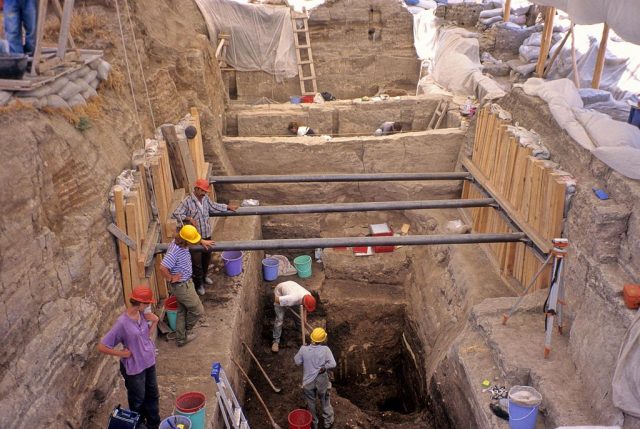 Deep trenches at the Catalhoyuk site. Photo by Mark Nesbitt CC BY 2.0

Larsen, who began fieldwork at the site in 2004, was one of the leaders of the team that studied human remains as part of the larger Çatalhöyük Research Project, directed by Ian Hodder of Stanford University. A co-author of the PNAS paper, Christopher Knüsel of Université de Bordeaux in France, was co-leader of the bioarchaeology team with Larsen.

“Çatalhöyük was one of the first proto-urban communities in the world and the residents experienced what happens when you put many people together in a small area for an extended time,” Larsen said. “It set the stage for where we are today and the challenges we face in urban living.”

Changes over time in the shape of leg bone cross-sections showed that community members in the Late period of Çatalhöyük walked a lot more than early residents. That suggests residents had to move farming and grazing further from the community as time went on, Larsen said.

“We believe that environmental degradation and climate change forced community members to move further away from the settlement to farm and to find supplies like firewood,” he said. “That contributed to the ultimate demise of Çatalhöyük.” As a Neolithic city experiencing one of the first known instances of an overcrowded urban space, surely there is much to be learned with further research.

Nancy Bilyeau, a former staff editor at Entertainment Weekly, Rolling Stone, and InStyle, has written a trilogy of historical thrillers for Touchstone Books. Her new book, The Blue, is a spy story set in the 18th-century porcelain world. For more information, go to Her Website