A Whopper of a Whale Tale: Sculpture Saves The Day After Train Crash

Public art is intended to do all kinds of marvellous things. It’s meant to stimulate people’s imaginations, provoke lively debate, serve as monuments to a nation’s past and, when it’s successful, demand that citizens ponder what their community’s future may hold.

It has not, traditionally, been meant to catch trains, planes and automobiles as they fly through the air after they go off course in some bizarre accident.

That, however, is precisely what a sculpture of two massive whale tails functioned as near a station in Spijkenisse, in the Netherlands, on November 2nd.

The 25-foot high twin tails served, essentially, as a massive catcher’s mitt when a subway train went careening off its rails, smashed through a cement guardrail and came to a screeching halt perched precariously atop the sculpture. 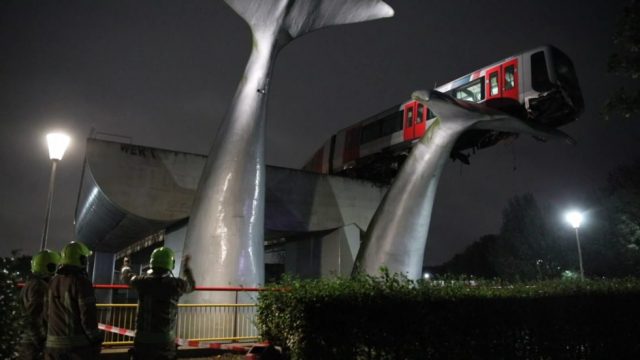 Fortunately, the car was empty of passengers at the time, and while the driver was taken to hospital and checked out, he was, according to press reports, more bewildered and confused than anything else, and was released the same day.

The accident happened just after midnight on November 2nd, and authorities and engineers are still, at the time of this writing, assessing how best to remove the train from the sculpture without further damage to it or the park below.

However, it’s proving to be a tricky extraction assignment because the whales’ tails, not surprisingly, rise majestically out of water. Its architect-creator, Maarten Struijs, named it “Saved By The Whale’s Tail” when he built and supervised its installation about 20 years ago, never imagining, no doubt, how tongue-in-cheek the name would one day prove to be.

But, as local safety authority representative Carley Gorter noted, “that literally happened” — the whales saved the train from crashing into the water below.

How and why the train went so badly off course is still under investigation. The train itself is ruined, as its undercarriage and rear windows were completely crushed and broken in the accident.

A more pressing concern is how to get the crumpled train car away from the sculpture. As Gorter explained to curious media and onlookers, a crane can’t simply be placed beneath the car to “reach up,” so to speak, latch onto it and pull it free.

Nor can it simply be pulled straight back, as that might damage the whales’ tails, on top of which the subway car now so delicately rests.

Perhaps because no one was injured during the freak accident, the architect, Struijs was able to be somewhat philosophical about the incident when he spoke with Dutch public broadcasting.

He said he thinks the car sitting there on his whale tail is a kind of art piece in and of itself, though “I could never have imagined it that way,” he added sardonically.

Gorter is more preoccupied with safety issues. “We have a lot of wind at the moment, and that’s one of the issues that we’re facing, (so) that’s a risk and a worry.”

Folks who live nearby – and plenty who don’t – have been flocking to the scene to take in the unusual sight. So many, in fact, that authorities have had to issue stern reminders about social distancing and other guidelines to stop the spread of the coronavirus, because people are crowding together to get a closer look.

The sculpture was never intended to act as a sort of gigantic, metal life raft capable of catching a subway train in mid-flight. But thankfully it was up to the task, and so far has shown no sign of giving way.

Another Article From Us: Observatory Scaled by James Bond & Used to Search for Alien life, Collapses

Now, if only engineers and other experts can come up with a clever way to remove the train from its sculpture saviour, life in the neighborhood near the De Akkers subway station can begin to get back to normal.