A 16th century Welsh farmhouse revealed a supernatural secret from Medieval times. Home renovations got a spooky twist when couple Kerrie Jackson and husband Bleddyn spotted a “witchcraft den” through a freshly-made hole in the wall.

Concealed in a gap behind the staircase was a bundle containing assorted goodies for tackling baddies – namely witches and demons. Bottles full of perfumes and poisons sat alongside animal skulls and rusted gun parts.

Some of the items, dating back some 500 years, appear less confrontational. For example: old receipts, a group of left-handed shoes and what’s described by some outlets as a half-eaten hat. But all seem to be vital in trapping evil forces seeking to access the house via the stairs. 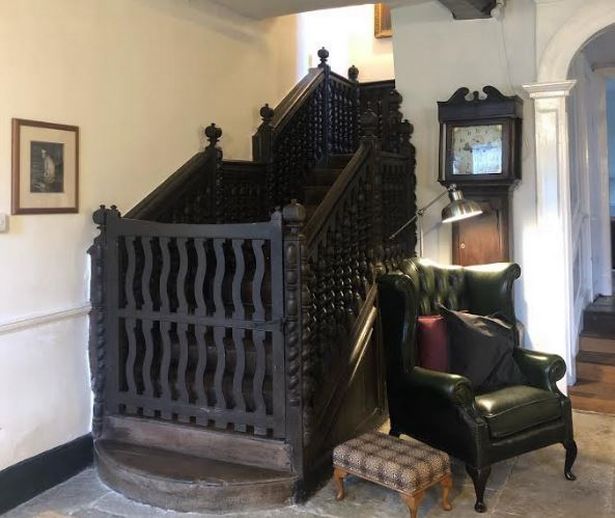 The haul was found under this staircase, an area regarded as an important transitional part of a house. Image by Kerrie Jackson.

This area was regarded as a “between” place as per superstition, a detail mentioned by Kerrie Jackson (a lecturer) and reported on by The Scottish Sun. The staircase was constructed over an old access door.

On discovering the bundle, Jackson said it was “very eerie to peer into the darkness and make out all the objects inside”.

Writing for Ancient Origins, Ashley Cowie believes the witchcraft den was a crucial line of defence against unwelcome and non-human visitors. This “plethora of anti-witch devices and demon traps” indicates the stairs weren’t simply a means of going up to bed. They were possibly “a highway to hell”.

Situated in Denbigh, the house was inherited by Bleddyn and is a Grade II listed structure. It’s known as the “Plas Uchaf”, or “Upper Hall” in English.

Elsewhere on the property, a creepy portrait dubbed “Vicky” was found behind some shutters in the parlor. The couple have an Instagram account should people be brave enough to find out more.

So how did the various objects in this bundle work in combating broomstick riders and soul stealers? The bottles of perfume and poison are no doubt “witch bottles”, a popular way of scaring the warts off a malevolent cackler.

“Common contents found in witch bottles include pins, nails, thorns, urine, fingernail clippings and hair” wrote Smithsonian Magazine. Their story concerned a 2019 discovery in Watford where a chimney was found to contain a similar haul.

One of the Denbigh animal skulls is definitely a horse. Jackson wondered whether this could be linked to “Mari Lwyd” – a tradition seeing in the New Year where folk drape themselves in a sheet while manipulating a horse skull.

However, Ancient Origins’ Cowie makes a connection to a text by researcher and archaeologist Sonja Hukantaival. She states that equine noggins were also viewed as witch and demon repellers. 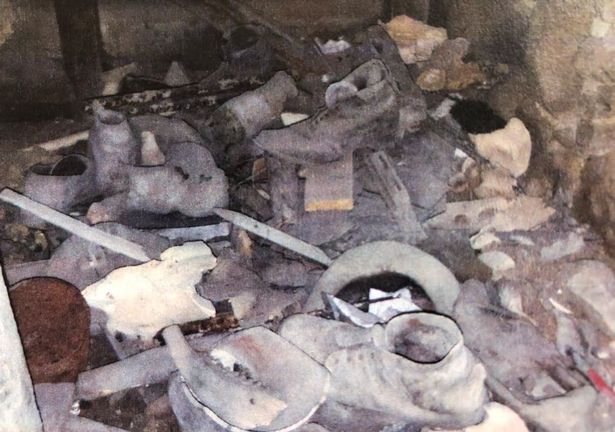 The strange collection as it was found. Image by Kerrie Jackson

The shoes – reportedly both adult and children’s sizes, according to The Scottish Sun – are a tougher sell. Yet apparently they prove most effective. An evildoer will home in on something featuring an owner’s scent. What better than a shoe for this purpose?

Apparently the witch or demon can slip into the shoe, at which point they cannot reverse out! The Scottish Sun refers to another animal skull, this one smaller. The couple reportedly don’t know what type of skull it is, adding to the sense of Medieval mystery.

One particularly strange item is the half-eaten hat. No explanation appears to be offered for how this contributed to the mix. Can a witch or demon be trapped in something as simple as a remnant of woollen headgear?

Along with the more fantastic elements are leftovers from a life gone by. Vintage photos and random paintings give an intriguing glimpse into former occupants.

The couple decided to respect the nature of the find and put it back where it came from. By sealing it back under the staircase, they’re leaving future generations to ponder over this eccentric slice of history.

Another Article From Us: Yaphet Kotto, Star of Live and Let Die and Alien, Dies Aged 81

And who knows, the bundle may well be keeping the forces of darkness away from the property…

« Oldest Egyptian Embalming Text Reveals How Faces of the Dead Were Treated
‘Pile of Rope’ on a US Beach is a Strange, Real-Life Sea Creature »