Helltown, Ohio: An Abandoned Town With a Tragic History

Located in the state of Ohio is a now-abandoned city called Helltown that was once the epicenter of folklore and mystery in the area. There is plenty of speculation as to why all the residents of Helltown left the place behind, and most of them are dark and ghostly. Many unsettling things are said to have taken place in the area, making it seem as though Helltown truly lives up to its name.

A church of Satanic worship in Helltown 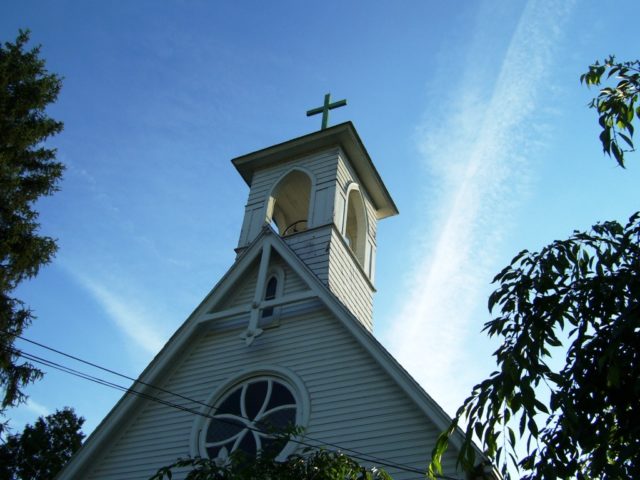 The tower of the church in Helltown was adorned with upside-down crosses, causing many to believe it was a place of worship for Satanists. (Photo Credit: Andrew Borgen / Flickr CC BY-ND 2.0)

There is a Presbyterian church in Helltown called “The Mother of Sorrows,” and dark rumors have circulated about what actually went on there. The church is believed to have been a place of worship for the Satanists who are said to have populated Helltown. It is also believed that the Satanists participated in human sacrifices and animal mutilation, but there is no evidence to prove those claims.

The church is adorned with upside-down crosses, which led many to believe that the church was occupied by Satanic worshippers. However, it is a Gothic revival church, and upside-down crosses were very common in that style of architecture. It is very unlikely that Satanic worshippers actually used the church for their own rituals, but some believe you can still see these Satanists lurking around at night.

Murder on the school bus 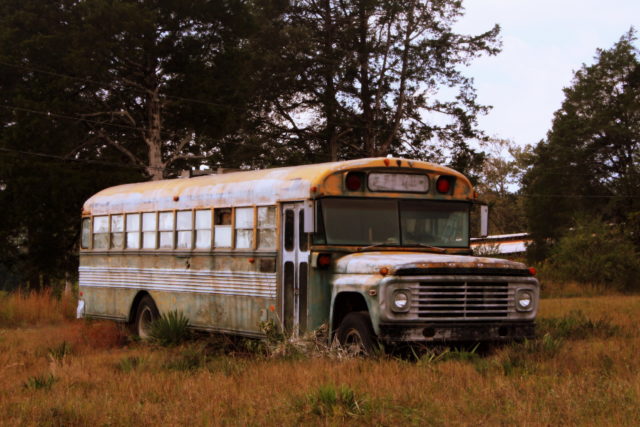 An abandoned school, similar to the one left in Helltown, sits in a forested area. (Photo Credit: Brent Moore / Flickr CC BY-NC 2.0)

There is also a rusted, old, abandoned school bus located in Helltown that is the subject of local lore. Many believe that the children that were carried around in the bus were the victims of murder, slaughtered by an insane killer who still inhabits the area. Some versions of the story even suggest that the Satanists were responsible for the deaths of the children. Superstition suggests that if you peer through the windows of the bus, you can see the ghosts of the victims.

In reality, the bus was simply abandoned. Anyone who claimed they saw the ghosts of murder victims likely had stumbled across a man and his family who were camping out in the old abandoned bus while their house was being renovated. Some might think that an abandoned school bus in a place called Helltown is a strange place to temporarily house your family, but ghost hunters who were searching the area were given plenty of ‘evidence,’ as they supposedly saw the family in the bus.

A chemical spill led to a mutant python 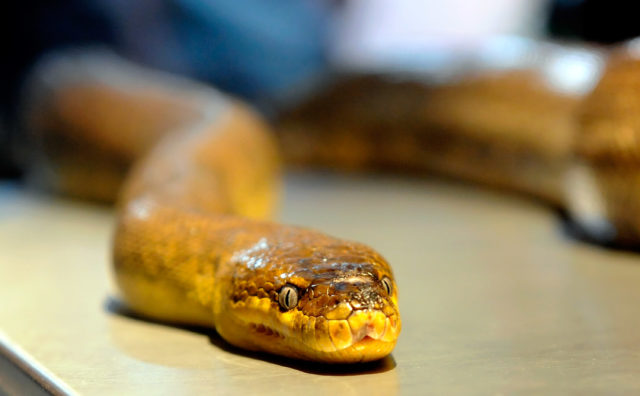 Other stories involve a chemical spill that’s said to have occurred near Helltown, causing serious harm to the inhabitants of the area. Residents and animals of the town were supposedly victims of bizarre mutations that were caused by the spill, and the government was forced to evacuate the city. The most famous story about the spill is the mutation of the “Peninsula Python,” which is a snake that grew to an enormous size and still slithers around Helltown today.

Krejci Dump, located near the abandoned town, actually was the site of improper chemical disposal and absolutely fed the lore that a chemical spill had caused all the alleged mutations. In 1985, park rangers visiting the dump became ill and developed rashes as a result of the toxic chemicals. The dump eventually became a Superfund cleanup site. as experts tried to reverse the damage that the chemicals had caused.

‘End of the World’ road 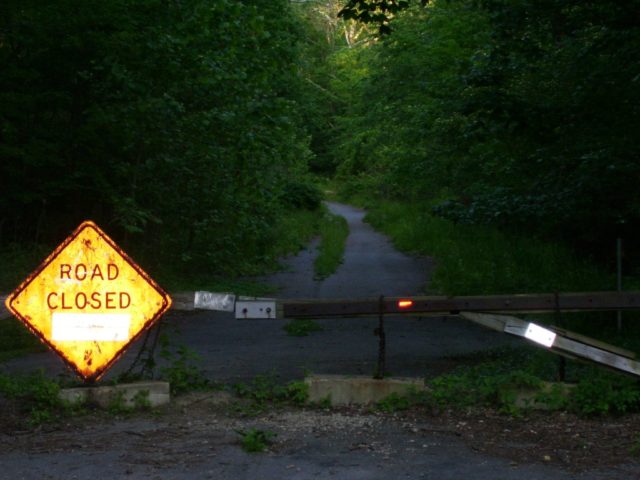 Fitting for a place called Helltown, a nearby thoroughfare has been labeled “End of the World” road. The road was abandoned during the 1980s as it was quite dangerous. There was a very steep segment that made drivers feel as though they were about to drop off a cliff. It also had a sharp turn that, in the dark of the night, could make it seem like there was no more road ahead of you.

The tumultuous history of Helltown

Helltown was founded in 1806, but it was actually named Boston. Helltown was simply a nickname for a part of the Boston Township in Summit County, which was the oldest village in the county. However, before the town itself came to be, there were rising tensions between Native Americans and settlers who were pushing in from the east. Bloody confrontations took place, and the Treaty of Easton was drafted, which put an end to the bloodshed but forced the Natives Americans from their homeland and pushed them further west.

It was the displaced Native Americans that settled in what is now considered Helltown. Unfortunately, settlers continued their conquest westward and tensions arose once again. 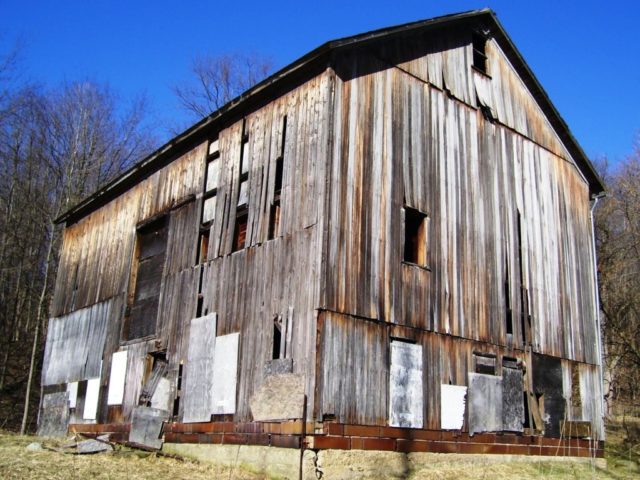 Although the folklore surrounding Helltown provides a variety of theories as to why the area was abandoned, the reality is that the town was the victim of government legislation. During the 1970s, deforestation was a strong source of national anxiety. To try and curb that unease, President Gerald Ford granted the federal National Park Services (NPS) the power to expropriate land in order to preserve forests in 1974.

The NPS earmarked Helltown as part of the new Cuyahoga Valley National Park and forced the residents to sell their homes to the government. One resident expressed his view of the displacement by writing, “now we know how the Indians felt” on a wall. The NPS began buying homes faster than they knew what to do with, and so the houses were abandoned and boarded up.

As they fell behind on their plans to create the park, “NO TRESPASSING” signs were placed on nearly all of the abandoned buildings in Helltown, adding to the eeriness of the folklore that was accumulating about the town. 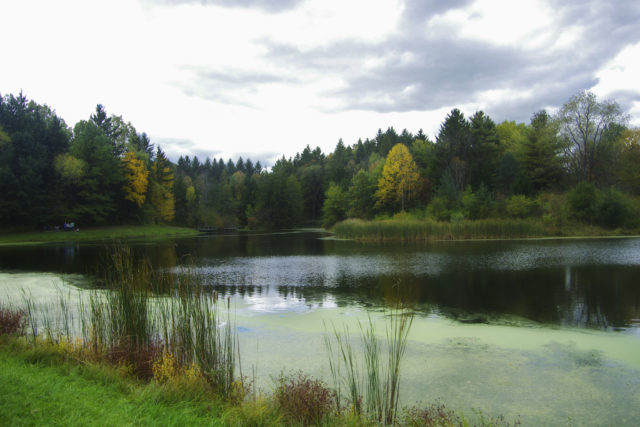 More from us: Revisiting the ‘Satanic Panic’ of the 1980s

In 2016, the abandoned buildings that used to make up Helltown were torn down, and the area where the village once sat was fully assimilated into Cuyahoga Valley National Park. Many people still visit Cuyahoga Valley National Park to explore the area where Helltown once was. Their hope is to catch a glimpse of ghosts, ghouls, or even the “Peninsula Python.”