‘A League Of Their Own’ is Home Run-Worthy Entertainment, but is it Historically Accurate?

Amazon Prime Video’s new release, A League of Their Own, is a sports comedy-drama about the establishment of the All-American Girls Professional Baseball League (AAGPBL) in 1943. If you’re wondering why the name of the new TV show sounds familiar, it’s because it was inspired by the 1992 film of the same name.

The show is set during the middle of the Second World War, making it a period piece. As with any show or film about history, we’re curious how accurate it is. In this case, very accurate. Here’s why.

The AAGPBL was established in 1943 after most of the men who would have been able to play in a league were away fighting in the war. There were a number of baseball executives who wanted to make sure that the game stayed in the public eye, so they proposed establishing a women’s league. The show focuses on the “Rockford Peaches,” which was really one of the teams formed in the early years of the AAGPBL. 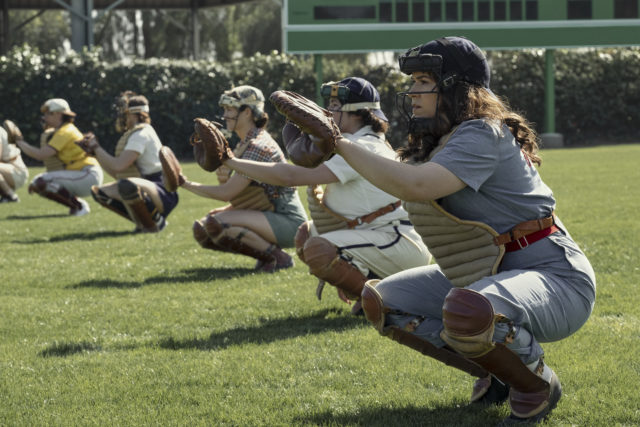 A row of women crouching with catcher equipment from season 1, episode 1 of A League of Their Own. (Photo Credit: Amazon Studios / acla/ MovieStillsDB)

They were one of only two teams that played throughout the entirety of the AAGPBL’s existence. The other was the South Bend Blue Sox. The uniforms in the show are also accurate to what the Peaches wore: a peach-colored dress with red socks, a red hat, and the Rockford city logo on the front. So the league was real, but what about the women in the show?

The women in A League of Their Own were also largely based on real players. As in the show, the teams were made up of a variety of different women, some from the US, but others recruited from Canada and Cuba. In addition to this diversity, many of the stories portrayed in the show come from the real experiences of the women who played. 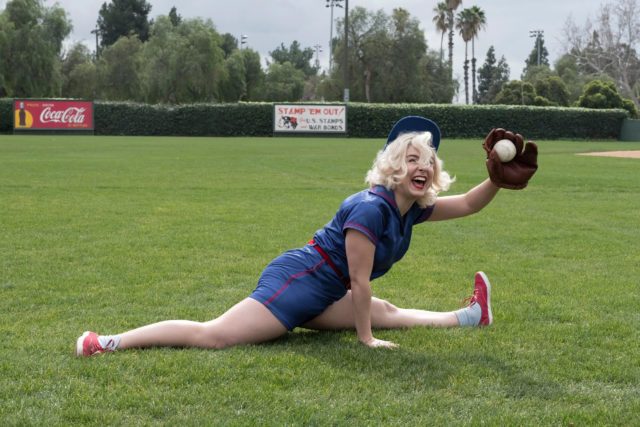 Playing sitting in the splits after making a catch in season 1, episode 3 of A League of Their Own. (Photo Credit: Amazon Studios / acla/ MovieStillsDB)

The character Max Chapman was based on three real-life women, according to the show’s producers. Toni Stone, Mamie Johnson, and Connie Morgan all played baseball with the Negro Leagues and had stories very similar to Max’s in the show. There are other correlations as well: Jo DeLuca was likely inspired by Josephine “Jo Jo” D’Angelo, and Casey Porter by Jimmie Foxx.

In addition to the historical connections between real-life players and characters in the show, A League of Their Own also portrays some broader social themes in an accurate way. For example, the show depicts race as a big part of AAGPBL players’ experience. The league was racially segregated for its duration, although a number of Latina women played.

Some viewers might assume that the depictions of same-sex relationships in the show are a modern addition. Not so. Showrunner Will Graham reported that a former player told him “the league was like a party for lesbians.” Riese Bernard, co-founder and CEO of the LGBTQ site Autostraddle told NBC, “A lot of reviewers seem to genuinely believe that there’s no way that many people on the team were queer, when there absolutely is. The show is a rich portrait of queer community and queer life during a time period when we don’t often get to see those stories told.” 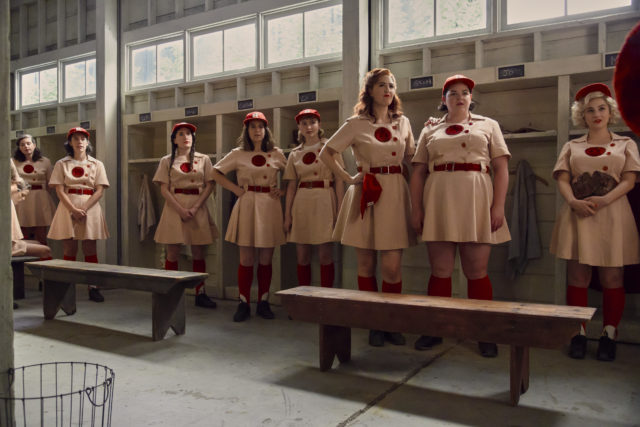 Still from season 1, episode 2 of A League of Their Own, showing the women in uniform in their locker room. (Photo Credit: Amazon Studios / acla/ MovieStillsDB)

The league also wanted to ensure that the players exhibited traditional femininity. This is why they were required to play in dresses, as well as wear makeup, both of which are depicted in A League of Their Own. Beverly, one of the characters, acts as a chaperone to ensure that the Peaches behaved in an “appropriate way,” another part of the experience that accurately showed how the AAGPBL operated.

More from us: These Terrifying Things In ‘The Handmaid’s Tale’ Are Based On Real Historical Events

As with any Hollywood retelling, A League of Their Own is a dramatized retelling of a story, in this case the creation, and women, of the AAGPBL. That doesn’t mean, however, that it is devoid of historical accuracy. In fact, it’s a show that is heavily rooted in the real people and events associated with the league.

« We Can’t Believe Why Frank Sinatra Cut Joey Bishop Out of the Rat Pack
What Finally Brought an End to the Cold War? »