What Finally Brought an End to the Cold War?

On December 26, 1991, the Cold War, a conflict that threatened the very survival of humanity for 44 years, finally ended – leaving one of the most powerful countries in the world in shambles. The war which many thought would end in nuclear disaster had all but fizzled out, ushering in a ceremonious – albeit somewhat brief – period of peace and unity between Russia and the United States.

But how did such a volatile relationship end without the destruction and conflict the world dreaded for four decades? The answer reveals how two world leaders went from nuclear to neutral.

The Cold War and the end of WWII

During World War II, the United States and the Soviet Union worked together as allies, though their relationship was precarious. The USSR was frustrated that the US continually refused to accept communist Russia as a legitimate global power, but the frustration worsened when America entered the war late – resulting in the deaths of millions of Russians. 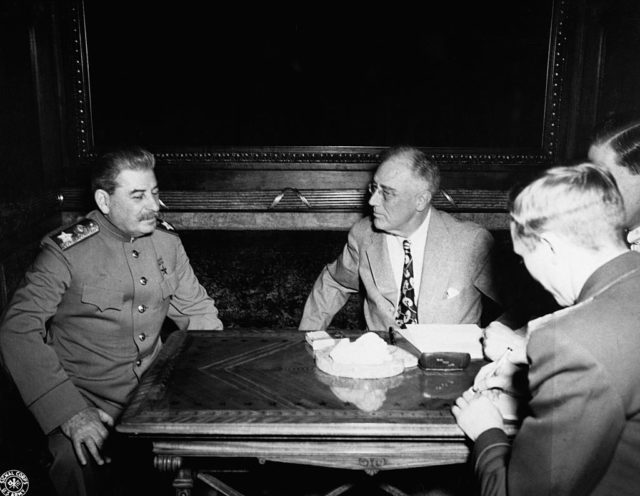 By the end of the war in 1945, America was fearful of Joseph Stalin’s tyrannical rule and enforcement of communism, which the United States saw as a threat to democracy and the American way of life.

These anxieties came to a head when Germany was formally split into two nations: the Federal Republic of Germany, better known as West Germany – which allied with Western countries like the United States – and the German Democratic Republic or East Germany, which allied with the Soviet Union.

Following the end of the war, the Soviets expanded their reach across eastern Europe, further fuelling the fear that North America was Stalin’s next target. Western allies implemented a strategy called “containment” in an effort to stop the USSR’s expansion. The United States began to stockpile arms and launch an ideological campaign against Soviet communism – triggering what many historians believe to be an inevitable conflict that became known as the Cold War. 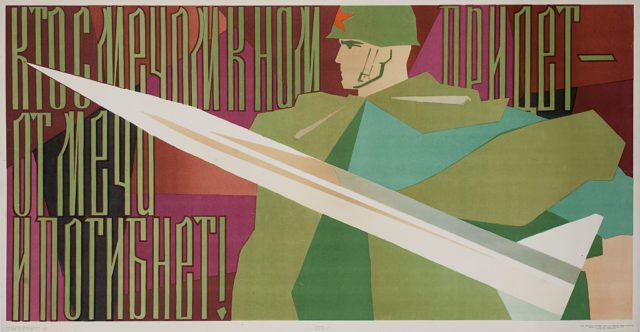 Soviet soldier in uniform and helmet stands behind a missile in a Cold War propaganda poster, circa 1980s. (Photo Credit: David Pollack / Corbis via Getty Images)

By 1950, America quadrupled its defense budget in reaction to continuing Soviet expansion, but the money wouldn’t go to arming soldiers or building aircraft. It went toward the development of the ultimate weapon: an atomic bomb.

The Soviets had already tested their own nuclear arms in 1949, triggering US President Harry Truman to declare that the United States would build an even better, more destructive weapon: the hydrogen bomb. Now that both sides were engaged in a tense nuclear arms race, the fate of the entire planet hung in the balance. 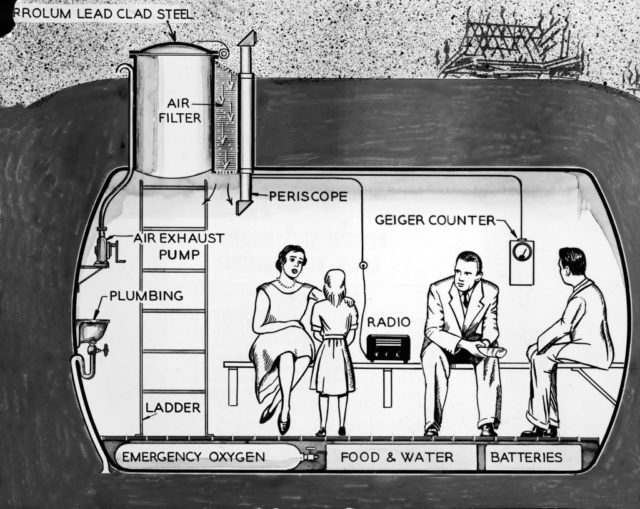 The threat of an imminent attack or worse – nuclear annihilation – marred the lives of Americans and Russians. Children were taught how to avoid injury should an attack happen at school using educational videos, while horrifying (and often exaggerated) films about the effects of nuclear fallout terrified everyday citizens.

The paranoia spread to every aspect of life in America. The “Red Scare” triggered a frenzy of accusations against movie stars, politicians, and artists believed to be working for the Soviets or identifying as communist. Thousands of government employees were fired as Senator Joseph McCarthy led a witchhunt against communism throughout the nation.

Escalation and the Cuban Missile Crisis

The Cold War also launched the “space race.” On October 4, 1957, the Soviets launched the world’s first-ever artificial satellite, Sputnik, which was the first man-made object to enter the Earth’s orbit. The launch was a total surprise to Americans, and the country’s first attempt to launch its own satellite, the Vanguard TV-3, failed. The US then successfully sent up Explorer I a year after Sputnik 1 and Sputnik 2 were launched. 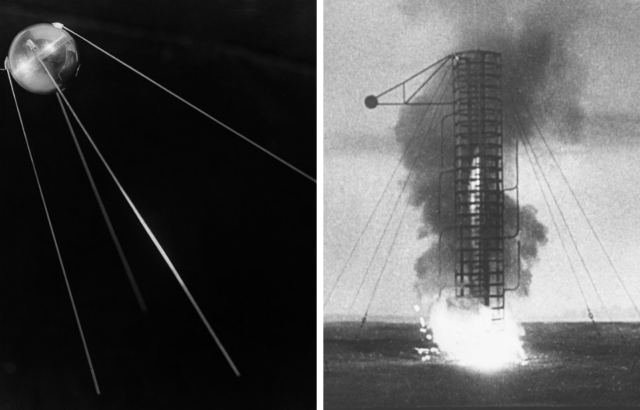 Despite unlimited money and resources, the newly formed National Aeronautics and Space Administration (NASA) couldn’t catch up to their Soviet comrades, who beat the United States yet again when they sent the first man into space in 1961. Then-President John F. Kennedy declared that the US would one-up their enemy by sending the first man to the moon by the end of the decade – which they accomplished in 1969. 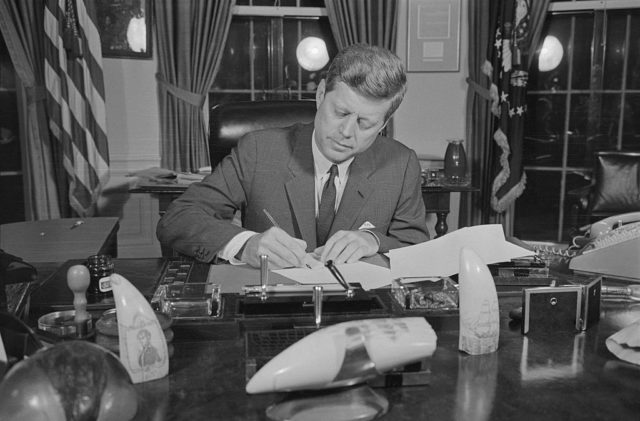 The escalation of the war reached its climax with the Cuban Missile Crisis. The 13-day political standoff took place in October 1962 following the installation of Soviet nuclear missiles in Cuba, just 90 miles from the United States. President John F. Kennedy told the public about the perceived threat to national security and enacted a naval blockade around Cuba while American citizens prayed that neither side chose to launch missiles and provoke an all-out nuclear attack.

Fast forward to the 1970s. Germany remains divided by East and West, and the United States and the Soviet Union are still locked in a nuclear arms race. The first of several summits, treaties, and negotiations kicked off in 1972 at the Moscow Summit. In the first visit by an American head of state to the Soviet Union since World War II, President Richard Nixon attended the summit at the Kremlin for the signing of the Strategic Arms Limitation Talks (SALT I) Agreement and the Anti-Ballistic Missile Treaty. 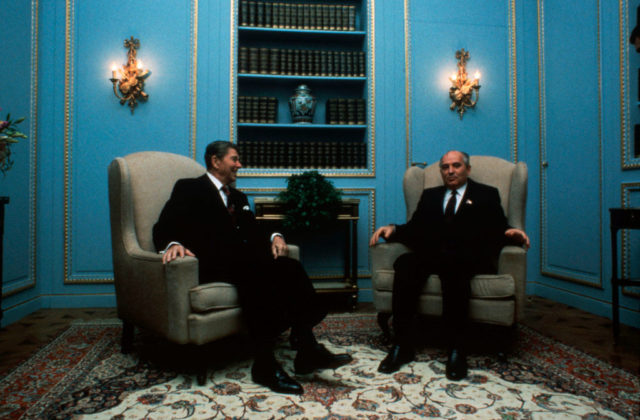 Summits were the key to ending the war. For years, tensions between the US and USSR were still too hot to negotiate, but Mikhail Gorbachev reinvigorated the summit process. The last leader of the Soviet Union, Gorbachev became General Secretary of the Communist Party of the Soviet Union in 1985.

The fall of the USSR

The same year, US President Ronald Reagan met with Gorbachev during the Geneva Summit – the first international summit between American and Soviet heads of state since the détente, a period of eased relations between Soviet Russia and America before the “New Cold War” began in 1979.

The Geneva Summit ultimately failed to bring about any real change, but improved relationships overall. Over the next six years, multiple summits would take place. When the Revolutions of 1989 eventually toppled Soviet power in the Eastern Bloc, Gorbachev quickly lost control of his country. 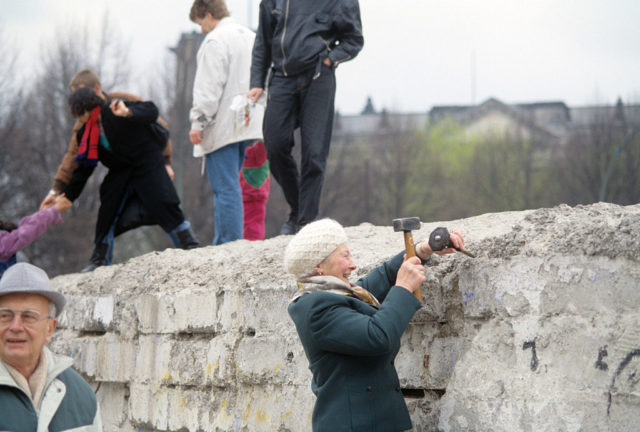 In the following months, Gorbachev, President George H.W. Bush, and German Chancellor Helmut Kohl collaborated to ensure a peaceful transition from communism in Russia and Eastern Germany. By Christmas day, 1991 the Soviet flag was lowered for the last time over the Kremlin following Gorbachev’s resignation as president of the Soviet Union.

More from us: Fidel Castro’s ‘Wanted Dead or Alive’ Bounty Reward Was Only Two Cents

With the USSR completely dismantled, America’s Cold War enemy ceased to exist and the war fizzled out. On August 30, 2022, Mikhail Gorbachev died at the age of 91. He was the longest-lived ruler of Russia in history and the last living Soviet leader – not to mention the only Soviet leader to have been born during the existence of the USSR.

« ‘A League Of Their Own’ is Home Run-Worthy Entertainment, but is it Historically Accurate?
Graceland Secrets That Even Elvis Fans Don’t Know About »