Archaeologists find bones of man killed about 1,000 years ago under a tree 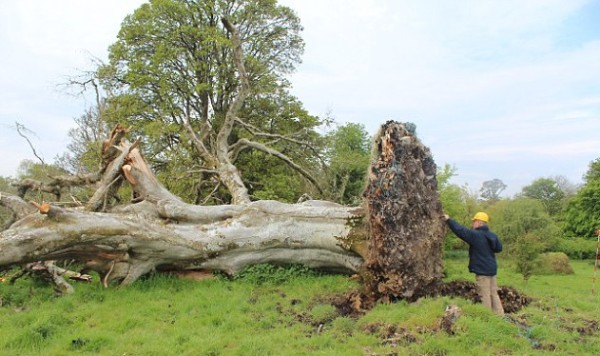 Buried some nine centuries ago, the remains of a man from the medieval times have come to light in the most peculiar circumstances. In the aftermath of a winter storm in Sligo, Ireland, the skeleton of the centuries old man were uprooted along with a massive tree.

The tree apparently grew out of the man’s grave, consequently the upper part of the skeleton i.e. the skull and spinal cord, were found trapped in the roots of the tree. The remaining part of the body was still left buried in the grave.

Sligo-Leitrim Archaeological Services (SLAS) was commissioned by The National Monuments Service to unearth the remains of the man, after the 215-year-old beech was literally uprooted in a strong winter storm that hit the region last year. The disturbing images of the severed body and the remains of the dead man were released by the SLAS on their official Facebook page. According to Dr Marion Down of SLAS this was a pretty unusual and bizarre excavation his team ever came across. She added that due to the severe storm the skeleton was practically snapped into two when the tree was uprooted due to strong winds. She said that the skull of the body was recovered trapped in the roots of the tree; however some of the remains were destroyed due to the root activity. (Mail Online)

Experts suggest that the remains belong to a young man who lived during the years of 1030 and 1200 AD. After analyzing the body for scars and other signs, it was concluded that the man must have died a violent death, during a battle or a brutal clash with a rival. After performing Radiocarbon dating on the remains, experts suggested the age of the man as between 17 to 20 years.

The detailed analysis of the body revealed that apparently the victim was trying to flee the attacker, and was eventually captured and brutally killed with a knife or some other sharp tool. A number of cuts and injuries have been discovered on ribs and other upper body bones, suggesting a very brutal attack that led to his death.

According to SLAS, the man was given a proper Christian burial, and those burying him made sure that his grave was in an east-west orientation and that his hands were folded over pelvis. Dr Dowd of SLAS suggests that either man’s family got hold of the dead body and gave him a proper burial, or it is possible that he was buried by his attacker/attackers and was given a Christian burial. Despite the fact the historical records point towards the existence of a large burial site in the region, the excavation team of SLAS has not yet found any evidence of any other burial ground in the vicinity.

« He Asked Helen Keller What She Has Seen From Empire State Builiding, This Was Her Answer
La Catedral: Pablo Escobar’s Self-Designed Prison »