Thermal Analysis on the Pyramids Shows Anomalies: Certain Parts Appear to be Hotter 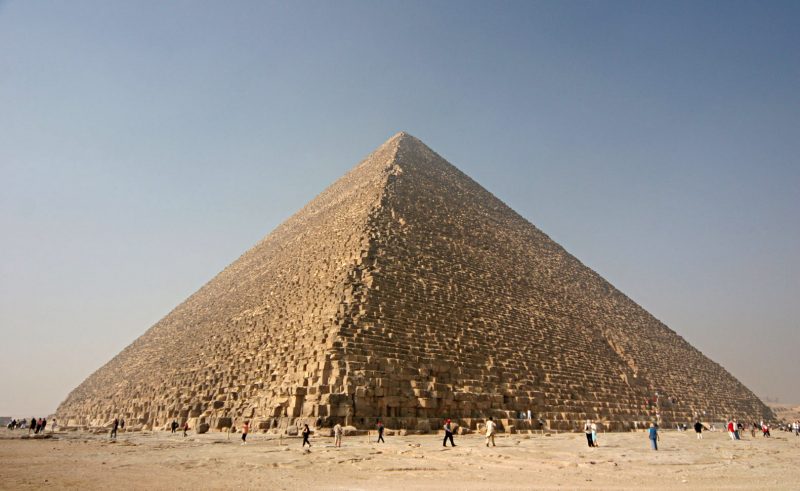 It seems like the pyramids in Egypt never stop to amaze us.They keep surprising us. Just when you think that they are completely researched, a new discovery appears. This month, an international team of scientists decided to make a thermal scan of the pyramids and they actually discovered some anomalies in the thermal image of the structure. The finding was reported by Egyptian antiquities officials.

By using thermal cameras and infrared thermography, the team was able to detect changes in three adjacent stone blocks near the bottom of the Great Pyramid. Higher temperatures were measured there. The measurements were made in two periods of the day: first during the sunrise, while the pyramids stone is heating up and then at sunset when the stone blocks are cooling down.

For now, it is believed that the change is caused by the existence of empty spaces inside the Pyramid. Another theory is that the temperature rise is caused by internal air currents or by the usage of different building materials.

Egyptian Antiquities Minister Mamdouh al-Damati presented the new discoveries on a press conference earlier this month, and called the anomalies “impressive”, he stated:

“particularly impressive anomaly was found at ground level on the eastern side of the Great Pyramid, also known as the Pyramid of Khufu. The first row of the pyramid’s stones are all uniform, then we come here and find that there’s a difference in the formation”

The majority of the Pyramid’s stone walls are heating and cooling down in an equal manner (with a difference of only 0.1 to 0.5 degrees Celsius between adjacent stones), but the three stones on the eastern walls mentioned above, are acting differently. This area is showing a temperature difference  of 11 degrees Fahrenheit (6 degrees Celsius), which is pretty much.

Thermal anomalies were also detected in other parts and especially in the upper half of the Great Pyramid.

This revelation is the result of an ongoing project that aims to find hidden chambers inside the Egyptian pyramids. Experts are thoroughly searching these ancient structures in order to completely demystify them and get more insight in how they were built.

The project called “Operation Scan Pyramids” started on October 25 and it is organized by the Faculty of Engineering of Cairo and the Paris-based Heritage Innovation Preservation Institute.

So far, this is the most precise examination project done on the Pyramids. The researchers are using non-invasive methods like thermal imaging and muon radiography. Muon radiography is a relatively new Japanese technology that was also used to get an inside look in active volcanoes and in the Fukushima nuclear reactors as well.

The project “Operation Scan the Pyramids” will run until the end of 2016. In the meantime they plan to scan all the major pyramids in Egypt: the Great Pyramid, the second-largest of the Giza pyramids, built for Khufu’s son Khafre, as well as the Bent Pyramid and the Red Pyramid (built Dahshur, about 15 km south of Saqqara) by Snefru, Khufu’s father and the founder of the 4th Dynasty)

« Lifetime Of Love – The Story Of Paul Newman and Joanne Woodward
Roosevelt moved Thanksgiving from the last Thursday of November to the fourth Thursday. Republicans were Furious »