Battle Of Britain Planes Being Restored for Movie Remake? 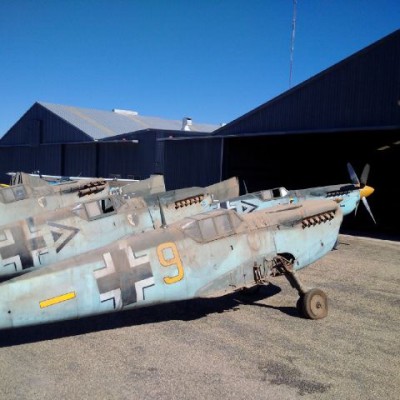 There is a plan for an “all-star” remake of the WWII movie “The Battle of Britain,” with Robert Towne now working on the script. This is the buzz that has been circulating for three years now but as well all know, it is a long process from concept to the big screen.

BUT, in light of four of the Messerschmitt ME-109C4K’s (Hispano HA-1112 Buchon’s) used in the original 1969 movie having been boxed up and on their way to California where they will be fully restored at Airmotive Specialties – then we guess that things are starting to hot up.

Remember the story last year of how these relics from the epic film, Battle of Britain were stored in a barn for over 40 years? 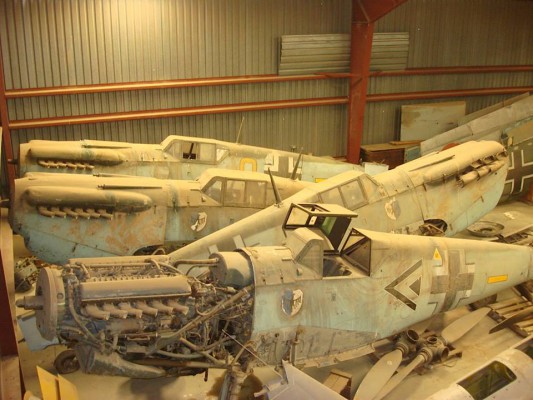 They played “the enemy” in the movie and were given to stunt pilot Wilson “Connie” Edwards in lieu of payment, along with the Spitfire he flew in the film. Now over 80, he decided to put them on the market after keeping them on his ranch at Big Spring in Texas.

He explained: “I was contracted for six weeks and 11 months later I was still getting shot down. The weather was foul and money tight by the end of filming, so I said, ‘Fine, I’ll take the aircraft as IOUs’.”

Simon Brown, of Platinum Fighters, which conducted the US sale, said: “The movie The Battle Of Britain was the largest aerial production of the Second World War aircraft ever filmed. In all, a total of six Messerschmitts, including the only surviving factory two-seater, were recently auctioned for almost 8 million dollars to Swiss company Boschung Global Ltd.

The film required a large number of period aircraft. In September 1965 producers Harry Saltzman and S. Benjamin Fisz contacted former RAF Bomber Command Group Captain Hamish Mahaddie to find the aircraft and arrange their use. Eventually 100 aircraft were employed, called the “35th largest air force in the world”. With Mahaddie’s help, the producers located 109 Spitfires in the UK, of which 27 were available although only 12 could be made flyable. Mahaddie negotiated use of six Hawker Hurricanes, of which three were flying. The film helped preserve these aircraft, including a rare Spitfire Mk II which had been a gate guardian at RAF Colerne. 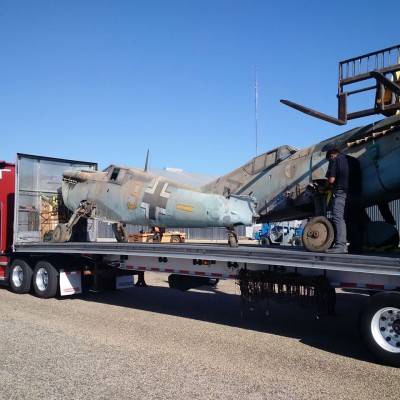 Two Hispano HA-1112 Buchon’s on their way to be restored to flying condition. source

A North American B-25 Mitchell N6578D, flown by pilots John “Jeff” Hawke and Duane Egli, was the primary aerial platform for aerial sequences. It was fitted with camera positions in what were formerly the aircraft’s nose, tail and waist gun positions. An additional camera, on an articulating arm, was mounted in the aircraft’s bomb bay and allowed 360-degree shots from below the aircraft. The top gun turret was replaced with a clear dome for the aerial director, who would co-ordinate the other aircraft by radio. 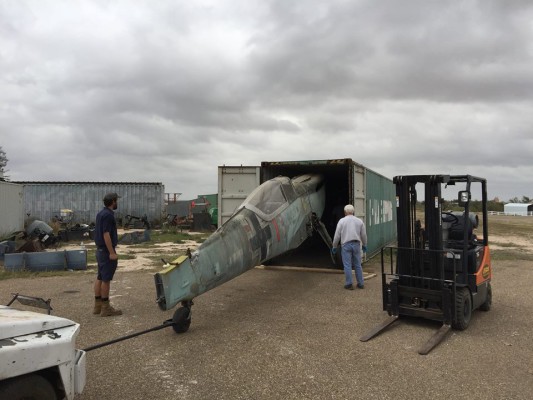 The Spanish aircraft were powered by British Rolls-Royce Merlin engines, and thus almost all the aircraft used, British and German alike, were Merlin-powered. After the film, one HA-1112 was donated to the German Luftwaffenmuseum der Bundeswehr, and converted to a Messerschmitt Bf 109 G-2 variant, depicting the insignias of German ace Gustav Rödel.

Two Heinkels and the 17 flyable Messerschmitts (including one dual-controlled HA-1112-M4L two-seater, used for conversion training and as a camera ship), were flown to England to complete the shoot. In the scene where the Polish training squadron breaks off to attack, (“Repeat, please”), the three most distant Hurricanes were Buchons marked as Hurricanes, as there were not enough flyable Hurricanes. In addition to the combat aircraft, two Spanish-built Junkers Ju 52 transports were used.

Permission was granted to the producers to use the Royal Air Force Museum’s Junkers Ju 87 Stuka dive-bomber (one of only two that survive intact). The 1943 aircraft was repainted and slightly modified to resemble a 1940 model Ju 87. The engine was found to be in excellent condition and there was little difficulty in starting it, but returning the aircraft to airworthiness was ultimately too costly for the filmmakers. Instead, two Percival Proctor training aircraft were converted into half-scale Stukas, with a cranked wing, as “Proctukas”, though in the event they were not used on screen. Instead, to duplicate the steep dive of Ju 87 attacks, large models were flown by radio control.

Platinum Sales: Over past ten years, they have sold more Spitfires, P-47s and Corsairs than any other brokers in the world. source

The Oscar-winning producer, Graham King, has hired Robert Towne to write the new script. Town also won an Oscar for his screenplay of Chinatown, as well as recent credits for the first two Mission Impossible movies to name a few. King told Entertainment Weekly the film is a kind of personal passion project, “My father lived in London and watched this spectacular dog fight over the city, so bringing this story of endurance and triumph to the big screen means a great deal to me,”

In the United Kingdom, filming of the aerial battle scenes over London and the home counties had generated considerable pre-release publicity. The film’s premiere was held at Leicester Square in London and was attended by Her Majesty Queen Elizabeth II. Roger Ebert wrote in 1969, “The airplanes are another sore point. Sure, Harry Saltzman spent millions to assemble and repair Spitfires and Hurricanes, and there was even a TV special about the authenticity of the movie. But you’ve got to USE airplanes; it isn’t enough to own them. Some of the aerial photography is very good. We see dogfights actually filmed in the air and fought by real planes (instead of by models and visual effects). But the aerial scenes are allowed to run forever and repeat themselves shamelessly, until we’re sure we saw that same Heinkel dive into the sea (sorry — the “drink”) three times already. And the special effects aren’t all that good for a movie that cost $12,000,000.”

« You Know the Biggest Gold Nugget Ever Found? Was a Staggering 173 lb
NASA Plans to Send a Submarine to Titan’s Seas »