The Amazingly Creative “Simple Sabotage Field Manual” From 1944. How To Prank Your Government

We are all fascinated by the spies we see in movies, using hi-tech gadgets and getting into extreme situations, doing impossible missions, jumping building, crawling in confined spaces and disguising themselves. But sometimes spying and sabotage involve doing less attractive and extreme stuff, as can be seen in this declassified  WWII “simple sabotage field manual.”

The document was used by The Office of Strategic Services (OSS), the modern day equivalent of the CIA. In 1945, the Second World War was slowly coming to an end. Although the allied forces were making good progress in their war effort, they still needed more local support and resources from the enemy invaded countries. OSS had an idea to gradually build up an army of disobedient  European citizens that will disorganize their own governments, not by shooting and attacking, but simply by being bad at what they do. the Simple Sabotage Field Manual was created to help the agents to come up with ideas while working with the local population. It is a summary of some pretty interesting ideas which can be used to motivate people to bring disorder to their governments. It’s a how-to manual for saboteurs! 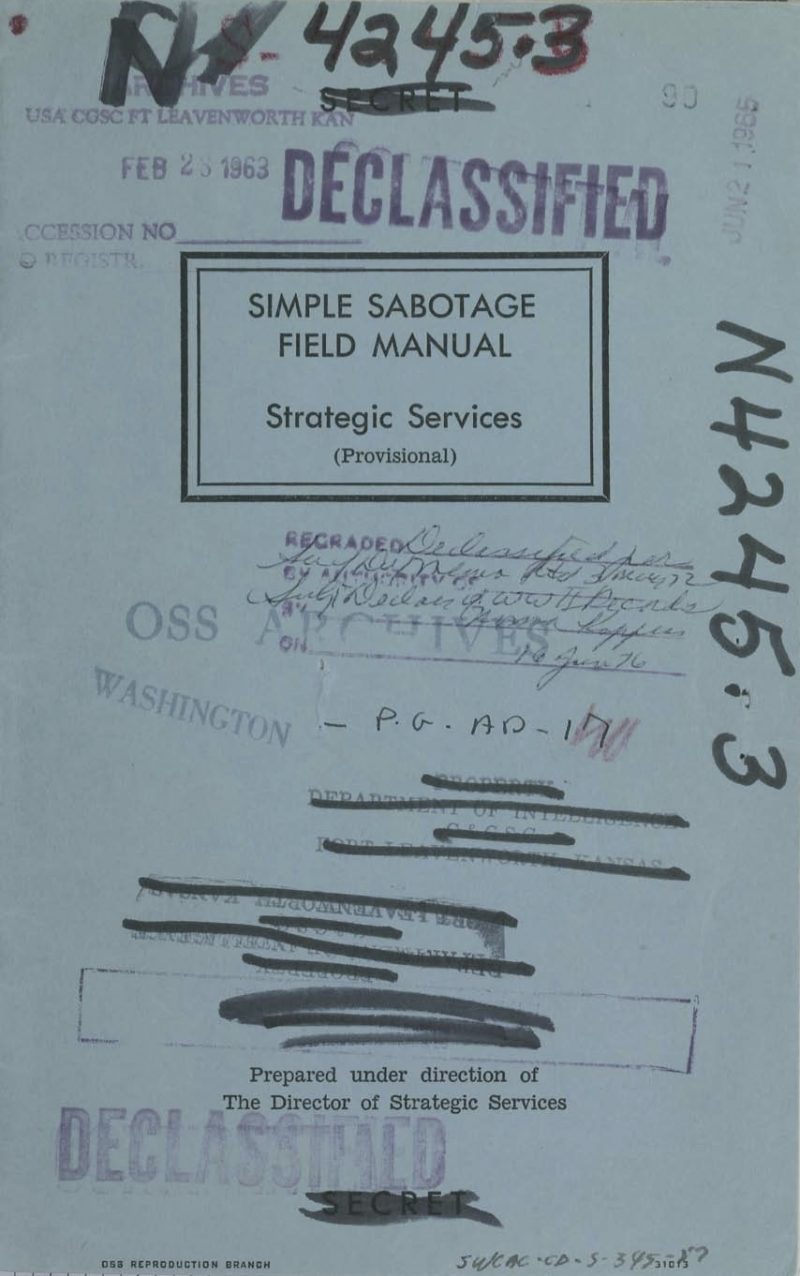 It turns out that WWII was partly won by clumsiness and acting dumb in front of your superiors. It would be nice if every war could be won like this.

This 32-page book is full of some amazing and simple ideas for things that an ordinary person without any special training can do. Some of the proposed acts are even amusing and remind of child pranks. Who thought that child pranks can be used for government sabotage. The foreword of the manual,  written and signed by Willam J. Donovan (The first director of the OSS), gives some instructions of the way in which the manual should be used:

“The instructions may be placed in separate pamphlets or leaflets according to categories of operations but should be distributed with care and not broadly. They should be used as a basis of radio broadcasts only for local and special cases, and as directed by the theater commander.”

The ideas given here do not limit the agent in his choice, he can choose and combine or upgrade his ideas, it is up to his creativity and the field conditions to decide how he will approach the task. 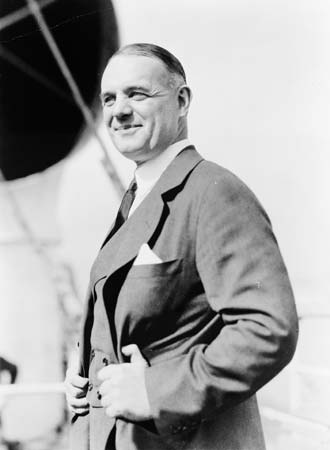 The acts of sabotage in the manual can be divided into two groups. The first part gives examples and explains how some industrial objects, machines, accessories, and ordinary substances can be used as sabotage tools and damage the work process in factories and public facilities. Here are some of the suggestions:

“A knife or a nail file can be carried- normally on your person; either is a multi-purpose instrument ‘for creating damage, Matches, pebbles, hair, salt, nails, and dozens of other destructive agents can be carried or kept in your living quarters without exciting any suspicion whatever. If you are a worker in a particular trade or industry you can easily carry and keep such things as wrenches, hammers, emery paper, and the like.”

This one could bring a whole army base down:

“Forget to provide paper in toilets; put tightly rolled paper, hair, and other obstructions In the W. C. Saturate a sponge with a thick starch or sugar solution. Squeeze it tightly into a ball, wrap it with string, and dry. Remove the string when fully dried. The sponge will be in the form of a tight hard ball. Flush down a W. C. or otherwise introduce into a sewer line. The sponge will gradually expand to its normal size and plug the sewage system.”

Here is another one:

“Put metal dust or filings, fine sand, ground glass, emery dust (get it by pounding up an emery knife sharpener) and similar hard, gritty substances directly into lubrication systems. They will scour smooth surfaces, ruining pistons, cylinder walls, shafts, and bearings. They will overheat and stop motors which will need overhauling, new parts, and extensive repairs. Such materials, if they are used, should be introduced into lubrication systems past any filters which otherwise would strain them out.”

This is actually still done in some countries, but not as an act of sabotage:

“In trains bound for enemy destinations, attendants should make life as uncomfortable as possible for passengers. See that the food is especially bad, take up tickets after midnight, call all station stops very loudly during the night, handle baggage as noisily as possible during the night, and so on.”

The second part of the manual explains some of the more “psychological” methods of sabotage and undermining. These ideas don’t involve any physical damage on the enemy facilities, instead, they ae dealing with the “human factor.” The suggested sabotage methods here are based on the principles of bad decisions, non-cooperation, and insubordination. Employees and employers are encouraged to do their jobs badly, to make mistakes while working, slowing down the work process as much as they can, and act as if they do not understand the tasks that are to them. Citizens were encouraged to act dramatically and historically (crying, shouting, sobbing) during every contact with enemy authorities and government clerks. The manual also offers some creative ways of how to sabotage enemy propaganda. Here are some examples:

“Misunderstand all sorts of regulations concerning such matters as rationing, transportation, traffic regulations.”

“Contrive as many interruptions to your work as you can: when changing the material on which you are working, as you would on a lathe or punch, take needless time to do it. If you are cutting, shaping or doing other measured work, measure dimensions -twice as often as you need to. When you go to the lavatory, spend a longer time there than is necessary. Forget tools so that you will have to go back after them.”

This is actually still done in some countries, but not as an act of sabotage:

“In trains bound for enemy destinations, attendants should make life as uncomfortable as possible for passengers. See that the food is especially bad, take up tickets after midnight, call all station stops very loudly during the night, handle baggage as noisily as possible during the night, and so on.”

This is for the managers:

“Make ‘speeches,’ Talk as frequently as possible and at great length., illustrate your points by long anecdotes and accounts of personal experiences. Never hesitate to make a few appropriate ‘patriotic’ comments”

The next idea is very interesting and may be linked to the way a lot of companies work today:

“Insist on doing everything through “channels.” Never permit short-cuts to be taken in order to expedite decisions.” 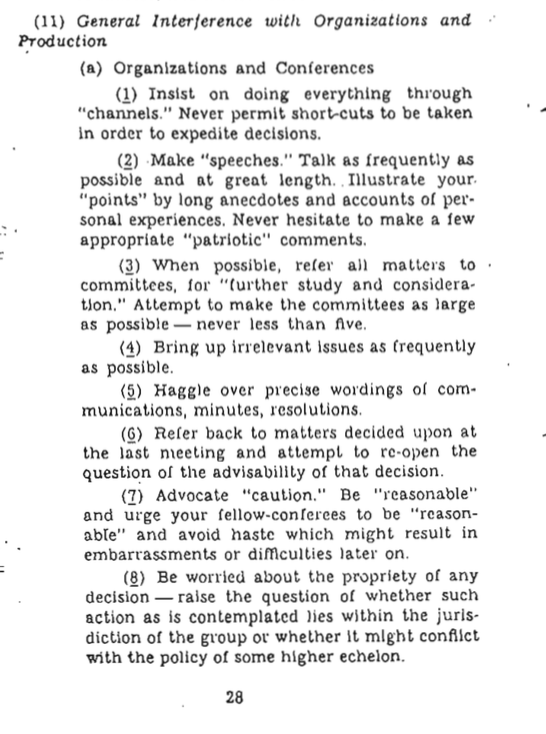 They encouraged middle management, putting every decision to countless committees. Employees  were encouraged to argue whether certain terminology is right, whether they are the right person responsible for a certain job, discuss widely about some unimportant parts of a project etc. It is amazing how similar these techniques are to some of those that modern managers and companies use. It looks like this sabotage manual sets the principles of modern day bureaucracy.