The Vikings & their crafts – how they impacted European trade & technology development

Technology, urban trading, international economics are a pretty common subject in the capitalistic world we live in today. They are all interconnected terms and their relations have been explored even a millennia ago. One of the experts in these economic and “industrial” relations and the issues that showed up with them were, of course, the Vikings.

Archeology has shown us that Vikings were more than just a brutal military power that used to raid all across Europe.  They were also settlers, farmers, capable politicians, and traders.

During the 8th and 11th century (A time period also known as the Viking Age), there were many technological advances happening in Europe. Not all of these advances were Scandinavian by origin, many of them were made thanks to the Anglo-Saxons, Frisians, and Franks. But, the Vikings were a key player in this age, they stood at the center of this technological exchange and evolution. The Vikings and their fleet of ships opened the way for an increasing contact between Scandinavia, the British Isles, and continental Europe. This also allowed technology to be shared and advanced easier. Innovations such as the potter’s wheel and the vertical loom helped the Vikings to transform their way of manufacturing and also increased the scale of production. 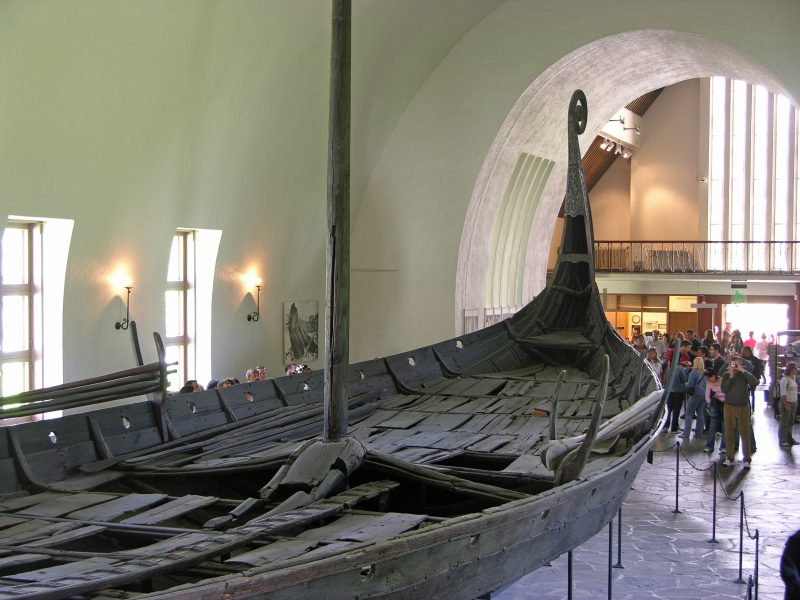 The Roman Empire was thriving during these days and people became more and more “globalized.” Trade became international and spread across the-the North Sea, The Baltic, and even beyond. It was a totally new age and way of life drastically changed for people. Technology adapted itself and reinvented itself for this new age.

Many of the Viking artifacts from this period and their usage is known, but the ways they were made, the tools used in the manufacturing process, are still not researched thoroughly. Viking craftsmen were very skilled, they had special tools developed for the production of their objects, and used a variety of raw materials. This means the craftsmen relied heavily on a huge and organized market. They needed a supply chain and a place to sell their products. That is why big urban regions started to appear and long distance trade became more common.

The Vikings are especially famous for their seafaring and shipbuilding. Many of the shipwrecks from that period that ar found today show evidence for the quality of their ships. Between the 8th and 11th century, the Viking ship “industry” developed even further than it was before. The invention of the sail led to building big and mighty warships, but also to the creation of large cargo vessels that would become dominant in Medieval Europe’s waters. But. besides their ship and weaponry technology, they were also famous for crafting some other things: 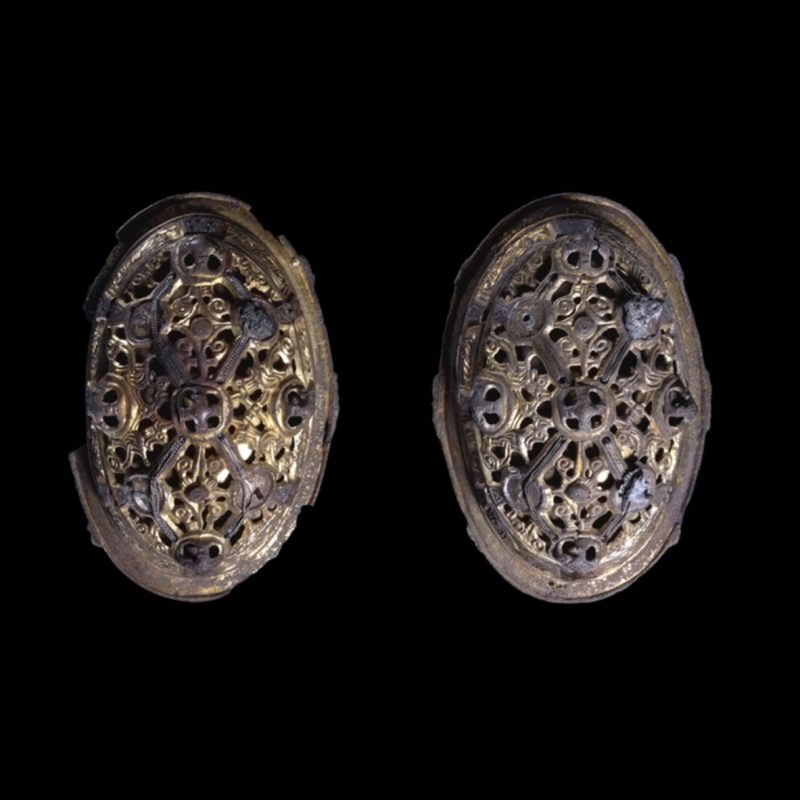 Among the most beautiful and original Viking items are their brooches with amazing and intricate designs. They have been studied by researchers for a long time. The brooches signify the gender, the status and the ethnic community of which the Viking that used to wear it. Further research is uncovering the exact way of their production. Crucibles and molds have been found in Viking settlements, that were probably used in brooch production. Some of the crucibles that have been found, still contain residues of the metals that were melted down for crafting. Carefully designed molds were used for casting the brooches. The molds were made by putting an existing brooch into clay or a lead model into clay. A further, minor, artistic alteration made the brooches look more original and different from the model. This way, they were able to mass-produce this product. Because of the high-quality brass ingots that were needed for brooch production, specialized jewelry centers were opened at Viking ports were shipments from long trade routes were arriving. 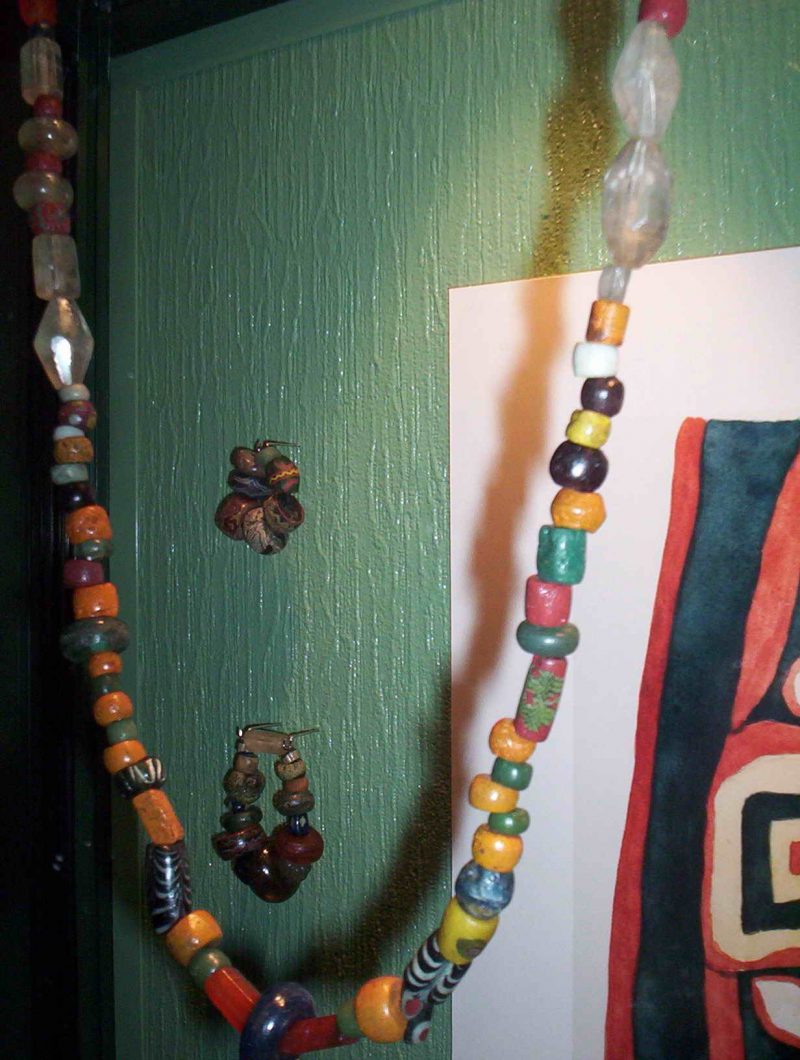 Beautiful ornate necklaces made of glass beads are also very often seen in museums today. Scandinavians used to manufacture glass beads by carefully shaping colored glass while it melted. From the excavated artifacts, it can be seen that the raw glass used for producing beads came in the form of small colored square blocks. They were called, “tesserae.” These block used to come from the Mediterranean where they were used fo making mosaics. It isn’t known whether these tiny square blocks were brought and sold to the manufacturers or they were ripped from Byzantine churches during raids, nevertheless they were turned into beautiful jewelry. 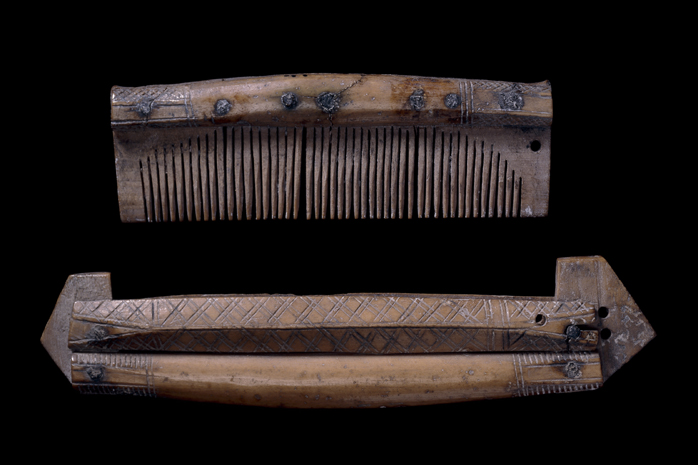 A Viking comb made from deer antler, with its case that protects the comb teeth / Photo credit: British Museum

Animal bones and antlers were one of the most desired and crucial materials of old times. They are durable, flexible, and available in large amounts. They were used for making a variety of objects such as weapon handles, ice skates, whistles etc.. Many of these objects were easy to make and can be produced quickly, with very little craftsmanship. But one item made from this kind of products wanted more attention and skill to be made; Viking hair combs. These large ornamented and detailed grooming devices took a long time to be produced and required the hands of a true craftsman. Besides that, they needed to develop some specialized tools like saws, rasps and polishers in order to make a larger number of these object. Their preferred material for these objects were deer antlers. That is why comb makers used to make their shops in towns with access to this product, especially near trading routes leading from the Artic north.

It looks like that behind their huge naval success and vast knowledge of weapons and armor smiting, there are also some fashion accessories manufacturing skills that certainly brought some wealth to the Viking craftsmen.

« 35 photos of the construction of the Titanic that you don’t often see
Scientists study 9,000-year-old artifacts gathered from North Sea that point to existence of Doggerland … »