Archaeologists have discovered a pair of “bongs“ made of pure gold that date back to 2,400 years ago and were used by Aryan kings. The discovery was kept secret to prevent looting and first came to light in the summer of 2013 when Stavropol-based archaeologist Andrei Belinski began excavating the kurgan, called Sengileevskoe-2, to clear the way for power-line project in Russia. Speaking of the discovery, Andrei Belinski added: “It was definitely a surprise for us. We weren’t expecting to find anything like this.“ Archaeologists also found other items made of gold, such as three gold cups, a heavy gold finger ring, two neck rings, and a gold bracelet, weighing almost seven pounds (3 kg). The items had been buried in a rectangular stone chamber before being concealed by a thick layer of clay. Anton Gass, an archaeologist at the Prussian Cultural Heritage Foundation, described the artifacts as “among the finest objects we know from the region.“ 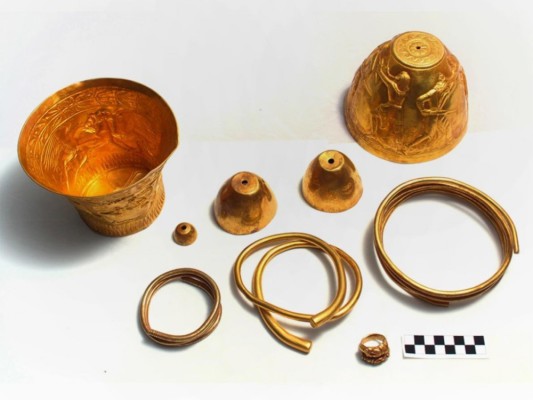 2,400-year-old “bongs” made of pure gold and other items made of gold such as three gold cups, a heavy gold finger ring, two neck rings, and a gold bracelet, weighing almost seven pounds. source

The scientists made another important discovery when they had criminologists test the black residue inside the bucket-shaped containers. The results showed traces of marijuana and opium, proving that these containers are indeed ancient bongs of sorts. Further testing suggested that the vessels were used to brew and drink a strong opium drink while burning cannabis nearby:. “That both drugs being used simultaneously is beyond doubt,“ Gass said.

These bongs are the oldest known to exist. The archaeologists believe the pair of treasures belonged to the Scythians, a nomadic warrior race who ruled over a vast area from Eastern Europe to Central Asia from the 19th century B.C. to the 4th century A.D. The Scythians were a group of nomads who migrated from Central Asia to Southern Russia and Eastern Europe and founded a powerful empire in the are now known as Crimea. The Scythians did not put au and cities or settlements, only huge grave mounds that are called “kurgans“ that can be found in areas from Mongolia to the Black Sea.

Historians say the Scythians would smoke opium and cannabis before going into battle to achieve an altered state of mind. Herodotus, a famous Greek historian who died in 425 B.C., wrote: “Scythians used a plant to produce smoke that no Grecian vapour-bath surpass which made them shout aloud.“ This latest discovery seems to confirm his theory. 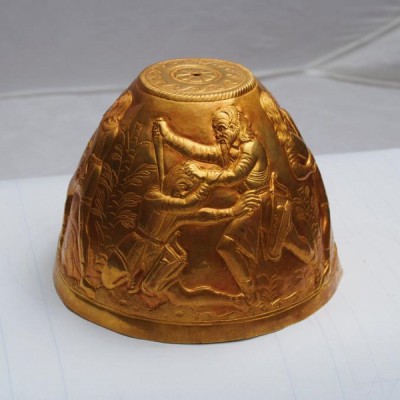 The ornate bongs each tell a story. Gass believes the remarkable imagery on the gold bongs appears to confirm more of Herodotus’s reports of the tribe’s so-called Bastard Wars, which saw warriors returning from battle with Persia to find their lonely wives had borne children to their slaves. The slaughter of these interlopers os believed to have been engraved upon one of the bongs. The other displays further violence in the form of griffons tearing apart a horse and a stag.

All the artifacts have been collected, cleaned and put on display at a Russian museum. Archaeologists suspect other artefacts might still be hidden in the ground and so plan to return to the area.

« The wreck of U-Boat 89. The U-Boat Hunter Dr Innes McCartney takes us down
The Bugatti that lay at the bottom of a lake for 73 years – the playboy owner didn’t want to pay the tax bill »