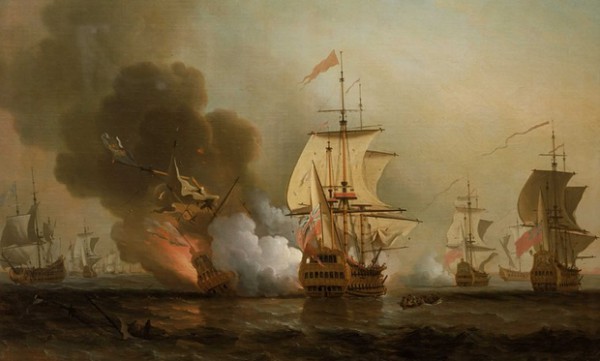 Early in 1708, Admiral Charles Wagner led a squadron of four ships to the Caribbean.  His objective was to find, attack, and board any Spanish galleons they might find, to ensure that Spain’s funding for the Franco-Spanish war effort was restricted.  In April of 1708 the squadron stopped at the Rosario Islands to take on fresh water and supplies. As these islands are near Cartagena, the Spanish were aware of the presence of the British squadron; the governor of Cartagena sent a warning to the Spanish fleet at anchor at Portobello.   In May of 1708, the commander of the Spanish fleet made the decision to sail from Portobello to Cartagena – not only was the hurricane season closing in but his escort was waiting in Cuba for him, and they had threatened to leave without him.  The Spanish fleet, comprised of fourteen merchant ships with a three warship escort, arrived on the evening of June 7th and anchored off Cartagena.  The next afternoon they saw the English fleet arriving and they took defensive positions. But the English fleet attacked, making a bee line for the San Jose as it was the largest vessel and presumably carried the majority of the treasure.  After ninety minutes of fierce fighting, the San Jose exploded and sank, taking nearly all of her crew as well as the treasure to the bottom of the ocean.

This wreck, with its fabled cargo estimated to be valued at $1 billion, was dubbed the holy grail of wrecks and was sought by many treasure hunters.   At the beginning of December 2015, the Colombian President announced that the Colombian Navy had located the wreck of the San Jose and that a new museum would be built in Cartagena to house the artefacts raised from the wreck. 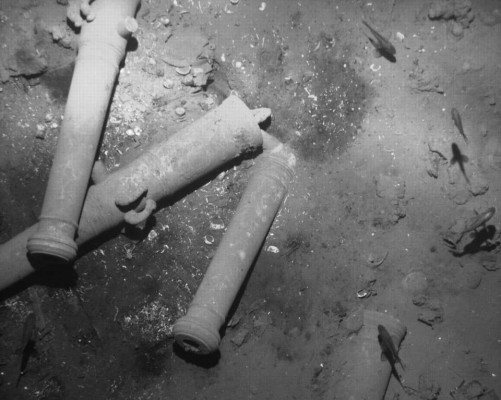 The salvage of the legendary San José and its cargo of gold, emeralds and other treasure could be worth as much as $17bn if ownership agreement can be reached. source

Columbia’s claim has been strenuously questioned by Sea Search Armada, a salvage company out of the U.S. that claims to have located the wreck early in 1981.  They say that they signed a deal with the Colombian government which gave them a 35% share in the treasure.  Apparently this deal was not accepted by the Colombian parliament, so Sea Search Armada fought for their rights in both Colombian and American courts. In 2011 an American court handed down a judgment that the ship belonged to the Colombian government.

Now the Colombian government may have to face a claim put in by the Spanish government.  The Spanish Culture Secretary made it very clear that Spain will defend its “sunken wealth”.  Spain has not decided what claim to submit but it is examining the information surrendered by the Colombian government.  Spain has been to war over sunken treasure before – in 2007 the wreck of the Spanish frigate, Nuestra Señora de las Mercedes, which was sunk by the British off Portugal in 1804, was discovered; a half a million gold and silver coins were recovered by the salvage company, Odyssey Marine Exploration.  A triangular battle ensued between Spain, Odyssey Marine, and the Peruvians, who claimed that the gold belonged to them because it had been plundered from the Incas.   In 2012, a U.S. court ruled that Spain could claim the treasure.  The reasons given were that the Mercedes was a warship on an official mission for Spain, and since Peru was a colony of Spain at that time, the treasure belonged to Spain.

The value of the treasure on the San Jose far exceeds the value of the treasure recovered from the Mercedes, so the legal squabble is bound to be protracted and vicious.  One can imagine an adventure thriller, along the lines of a Clive Cussler book, being written about this episode.   How an ungainly mobile safety deposit box with sails was pressured by the weather and their escort, which was safely anchored a thousand kilometres away, into sailing into danger.  It sinks after being bombarded by an enemy nation and hundreds of years later it is found and salvaged; then the modern day “sea battle” ensues. The winners in that battle will be the legal profession, which will rake in millions of dollars fighting a long and complex court case.