The horrors of the world if women were to have rights 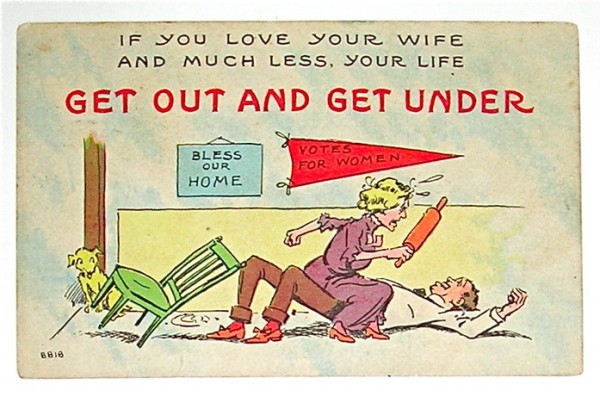 Women’s Rights – there is a phrase that causes divisions in any group of humans that you could care to put together!  From the day that a Neolithic man dragged his mate into the cave by her hair, there have been women arguing for the right to run their own lives, and an equal number of men claiming they haven’t the intelligence to do so.

For women in England, the right to vote was one of the rights for which women started to agitate in the late 1800’s, when Millicent Fawcett founded her National Union of Women’s Suffrage. The actual birth of the women’s movement stated a great deal earlier.

One of the very earliest advocates of women’s rights was Mary Wollstonecraft, the authoress of the book, A Vindication of the Rights of Women, which was published in 1792.  In this book Wollstonecraft argues that women are not naturally inferior to men; they only appear that way because of a lack of education.  In the 18th century, education for women was certainly nowhere near the level as that offered to men.  The education a female received was limited to giving her the ability to read and write and to do basic arithmetic – sufficient to manage the household.  She might also be taught French, music, dancing, needlework and social etiquette, but formal education at a university level was absolutely forbidden, and if a lady was educated beyond her station she was likely to be ridiculed by both sexes. 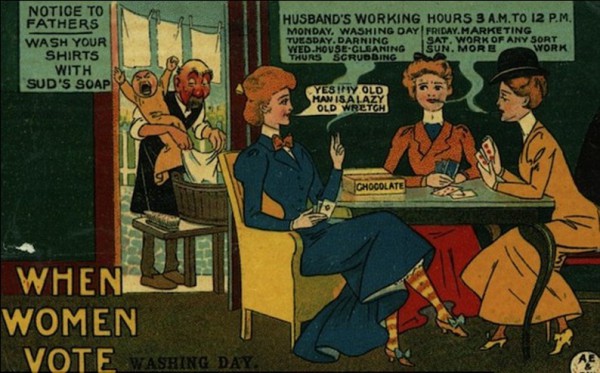 The label “bluestocking” was derived as a demeaning term applied to intellectual women; the term originated from the membership of the Blue Stockings Society, whose leader was Elizabeth Montagu.  If a woman persisted with her education and, as a result of this decision, chose not to marry, the derogatory label of “ape-leader” would be appended.  This label was intended to describe the woman as a failure to her sex; as she had chosen not to marry and have children she would be condemned, at death, to lead the apes into Hell.

It is fascinating to note that this abuse became prevalent the higher one rose on the social and economic  scale.  If a woman was born to the peasant or lower classes, she would have known from birth that she would have to work for the rest of her life, and that marriage may very well be not an option at all.  Trades people understood very well that their daughters would marry farmers or tradesmen and would work all the days of their lives. But if born into the gentry or nobility no woman would have dreamed of having to work for a living. Amongst the nobility, it can be clearly seen that women who tried to claim the right to an education and the ability to live their lives by their own rules were subject to ridicule by both men and women, though for somewhat differing reasons. 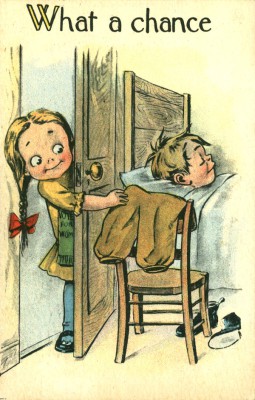 Yet the underlying fear was the same – those who chose to ridicule these women were terrified of change.  For women, that meant changing the way they have lived for centuries and being forced to face the reality of making their own way in the world.  For a noble woman in the 18th century, that would have been a terrifying thought, as she would have had no role models to rely upon, and the social upheaval would likely have been devastating.

For men, it was simply unimaginable that a woman would be able to understand politics or business; they were only able to comprehend fashion, food and running a household.  For him to admit that women were as capable as he would have meant denying all that he believed true.  Remarkably, men did not appreciate that running several households over several estates spread over England, as some noble women undertook, would be a highly complex and challenging task. 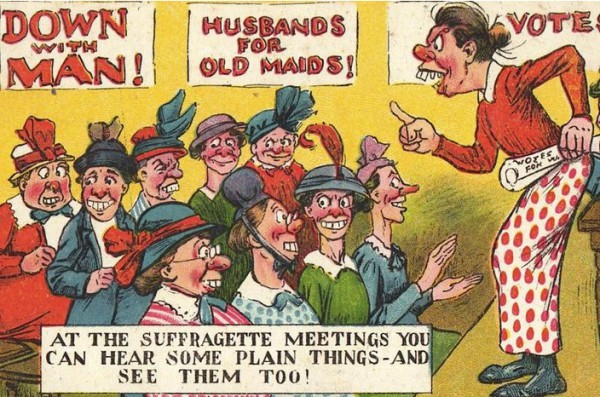 When the suffragette movement came along in the latter part of the 19th century it was viewed with no small amount of alarm and was treated with scorn by the male population general.  Those members of parliament that would go on to become the Labour Party were somewhat sympathetic to the idea that women could vote, but the majority of those that would be aligned with the Conservative Party were fiercely opposed to such a notion.  The suffragette movement argued that while parliament passed laws that women had to obey, they had no means of influencing the making of those laws. 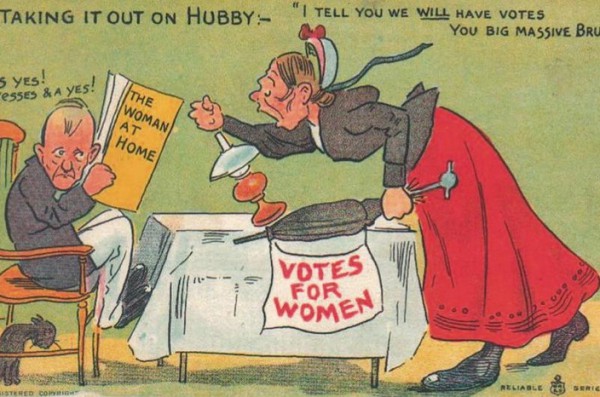 They paid the same tax as men but had no say in how those taxes were spent. Many wealthy women employed butlers, footmen, grooms and gardeners – all of whom could vote but not necessarily read or write – yet she had no say in the selection of a government.

Again, those opposed to the idea of votes for women turned to ridicule as a tool to discredit the entire movement.  Cartoons proliferated and in every case the woman who wanted to claim her rights was portrayed as slovenly, ugly, single, over-educated and an embarrassment to her sex.  They were portrayed as mannish, and the cartoons implied that they wanted to take over the world and become men. 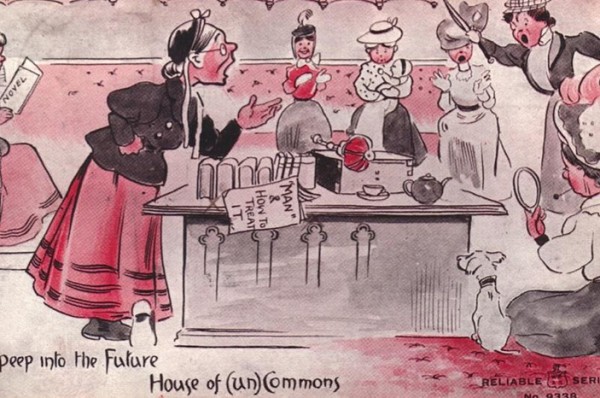 The men in the cartoons were invariable portrayed as weak, hen-pecked and completely down-trodden.  These generalizations were humorous and surely must have caused many a laugh, but they had the intended effect.  Men were afraid of being viewed as hen-pecked, so they refused to allow their wives to attend the meetings. Young ladies were afraid of being labelled as mannish, so they also stayed away on their own. 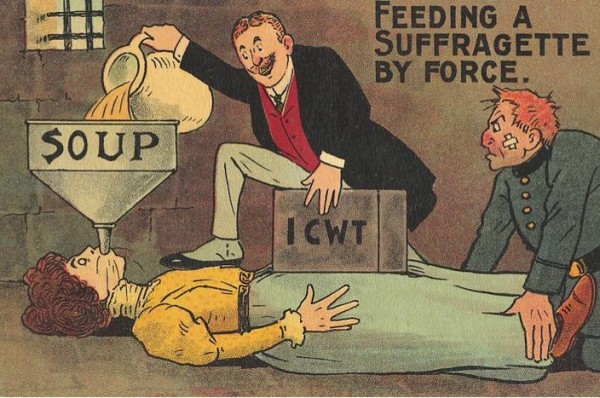 The movement started by Millicent Fawcett believed in debate and peaceful protest to gain their rights, but by the early 20th century a new movement headed by Emily Pankhurst emerged. This was an entirely different kettle of fish – violence became more prevalent, and those ladies sent to prison embarked on hunger strikes.  This caused a great deal of alarm in government, as it was believed that, should any one of the women die in prison, they would be viewed as a martyr. 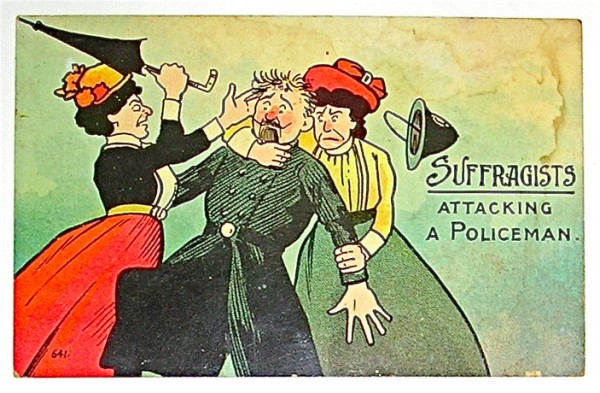 Prison staff were ordered to force-feed the women; this in turn caused an outcry, as forced feeding was usually associated with the care of the mentally unstable and it seemed crude to be doing it to well educated women.  The government relented and forced feeding was stopped, but should a suffragette go on a hunger strike she would not be allowed to die in prison – she was released when very weak and sent home.  If she died at home the government could not be held accountable.

The suffragette movement was for the most part suspended because of the outbreak of World War I. Women supported the government throughout the war, providing valuable services both at home and near the front.  Eventually in 1918 women in Britain gained the right to vote. 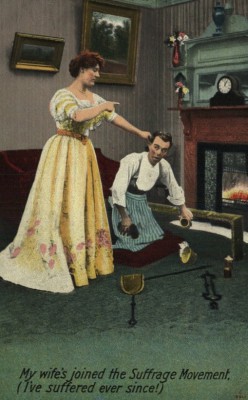 The realm of women’s rights is fraught with hurdles to overcome and mountains to climb.  There are issues of religion, culture and history that need to be conquered and none of this is simple.  One can only hope that as time goes by men and women, as well as all people of differing cultures and religions, come to realize that we are not that different.  Perhaps our shapes and the color of our skin are different, but inside we are one and the same –  people trying to live life as best we can. By trying to understand and get along with each other, we actually grow and not disintegrate. 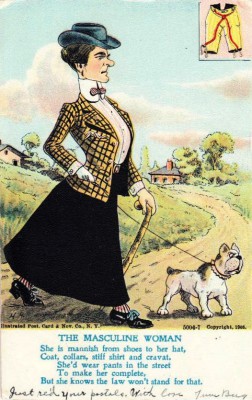 « Sullivan brothers: All five were killed when their ship was sunk by a Japanese sub.
Traces of blood discovered on ancient arrowheads »